Part – I
(Answer all questions)

Question 1.
(a) Fill in the blanks by choosing the appropriate word/words from those given in the brackets: [5]
(concentrated sulphuric acid, methylamine, ethylamine, sp2, 2-propanol, s-1, sp3, glycol, Cannizzaro’s reaction, pyramidal, mol L-1s-1, Hofmann’s degradation, glycerol, concentrated nitric acid, square planar, octahedral, concentrated hydrochloric acid.)
(i) The nitrogen atom in ammonia undergoes ………… hybridisation and the geometry of the molecule is ……….
(ii) For a first-order reaction, the unit of rate is ……… and that of the rate constant is ………..
(iii) When acetamide is treated with bromine and caustic soda, it gives ………… as the main product and the reaction is called ………..
(iv) …………. is an example of trihydric alcohol and …………. is an example of dihydric alcohol.
(v) Aqua regia is a mixture of ………. and ………. in the ratio of 3 : 1.

(iv) Among the following compounds, the one showing geometric isomerism is:
(1) 2-chloro propane
(2) 2-Bromo-2-chlorobutane
(3) 1, 2-dichloroethene
(4) Glycine

(c) Answer the following questions: [5]
(i) 0.1 M urea solution shows less depression in freezing point than 0.1 M MgCl2 solution. Explain.
(ii) What is the pH of a solution whose hydroxyl ion concentration is 10-2 M?
(iii) If neutral litmus solution is added to sodium acetate solution, what will you observe and why?
(iv) State why the boiling point of HF is very high.
(v) Define piezoelectricity and give one use of piezoelectric crystals.

(c) (i) In aqueous solution, MgCl2 ionises into Mg2+ and Cl– as it is an electrolyte while urea is a non-electrolyte and does not ionise. As a result no. of particles of solute in MgCl2 solution is more than in urea solution. Due to this depression in f.pt. of 0.1 M urea is less than that of 0.1 M MgCl2 solution because of depression in f.pt. is a colligative property and depends upon the number of solute particles. 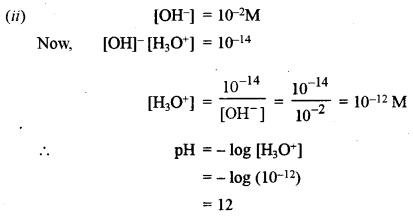 The resulting solution is thus basic in nature. It will turn red litmus blue and will have no effect on blue litmus solution.
(iv) It is due to the association of HF molecules due to intermolecular hydrogen bonding. A large amount of energy will be required to overcome these forces of attraction.
(v) When mechanical stress is applied on polar crystals they produce electricity due to the displacement of ions. This phenomenon is called piezoelectricity. Lead zirconate (PbZrO3) is an example of a piezoelectric crystal.

Section – A
(Answer any two questions)

(c) (i) For exothermic process, ΔH is negative. Therefore, energy factor favours the process.
Since randomness is increasing, therefore, it also favours the process. Since both factors are favourable, the reaction will be spontaneous and ΔG will be high -ve.
(ii) 1 M acetic acid i.e. 60 gms acetic acid dissolved in 1000 mL H2O
CH3COOH dissociated to CH3COO– and H3O–
H2O dissociated to H3O+ and OH– ion
So, total no. of H3O+ ion increases in dissociation condition.

Question 3.
(a) (i) What are semiconductors? What is the effect of increasing temperature on the conductivity of a semiconductor? [1\(\frac { 1 }{ 2 }\)]
(ii) A compound AB has a cubic structure and molecular mass 99. Its density is 3.4 g cm-3. What is the length of the edge of the unit cell? [3]
(b) (i) What is the maximum work that can be obtained by the isothermal expansion of one mole of an ideal gas at 273 K from 2.24 dm3 to 22.4 dm3? [2\(\frac { 1 }{ 2 }\)]
(ii) State the geometry of PCl5 molecule. Draw its structure. [1]
(c) Give two differences between a sigma bond and a pi bond. [2]
Answer:
(a) (i) The solids whose conductivity lies between metal conductors and insulators are called semiconductors.
The conductivity of a semiconductor increases with increasing temperature. 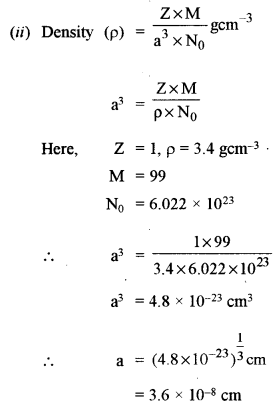 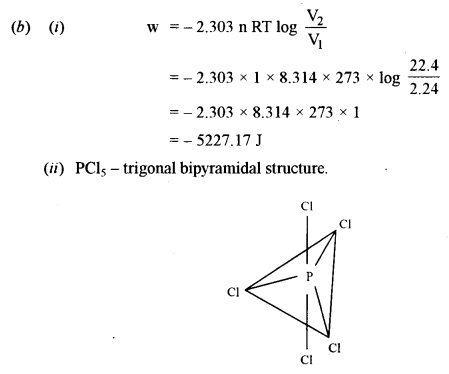 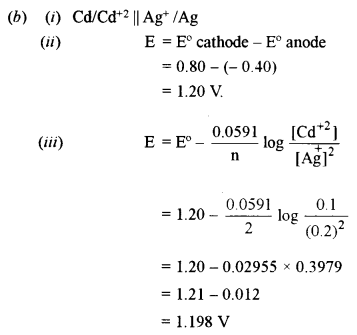 (iv) Since the cell emf is positive, therefore, the redox reaction in the cell is spontaneous and the cell will work spontaneously.

(c) (i) It is a substance which is added to a catalyst to increase its activity, e.g. molybdenum is used as a promoter in the preparation of NH3 by Haber’s process. 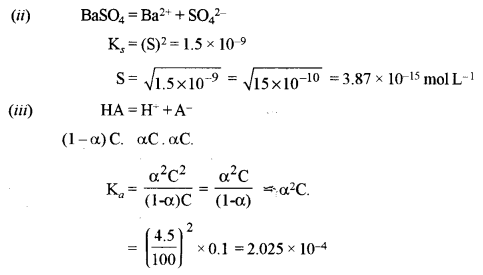 Section – B
(Answer any two questions)

Question 5.
(a) Give the IUPAC names for the following: [2]
(i) Na3[AlF6]
(ii) [CO(NH3)6]Cl3
(b) For the complexion of [Fe(CN)6]3- : [3]
(i) Show the hybridization diagrammatically.
(ii) Is it an inner orbital complex or an outer orbital complex?
(iii) State its magnetic property.
Answer:
(a) (i) sodium hexafluoridoaluminate(III)
(ii) hexaamminecobalt(III)chloride 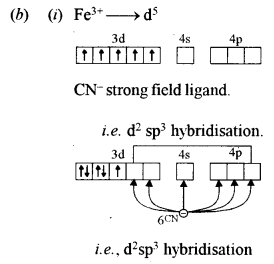 (ii) Inner orbital complex.
(iii) It is paramagnetic due to one unpaired electron.

(b) Iron atom contains four unpaired electrons. In the presence of external magnetic field, their spins (domains) are oriented in the direction of field and the substance thus has very large magnetic moment. The alignment persists even in the absence of external field and it remains magnetised. Thus, it is ferromagnetic in nature.

Question 7.
(a) State the common oxidation state of [1]
(i) Lanthanides
(ii) Actinides
(b) In a given transition series, there is no significant change in the atomic radii of elements with an increase in atomic number. Explain why. [2]
(c) Give reactions and the conditions required for preparation of the following compounds: [2]
(i) XeF6
(ii) XeOF4
Answer:
(a) (i) (+III)
(ii) (+III)

(b) In a transition series, with increasing atomic number, the nuclear charge increases. The electrons are added into penultimate d-subshell. The added d-electrons shield the outermost electrons. As d-electrons increase shielding effect also increases. This counterbalances the increased nuclear charge. As a result, there is no significant change in the atomic radii of elements with an increase in atomic number.

Question 8.
(a) Carry out the following conversions: [6]
(i) Methyl chloride to acetic acid.
(ii) Benzene to benzoic acid.
(iii) Ethanol to acetone.
(b) Deficiency of what vitamins will cause the following diseases: [1]
(i) Night blindness.
(ii) Scurvy.
(c) Give balanced equations for the following: [3]
(i) Glycerol is heated with oxalic acid at 110°C (383K).
(ii) Acetamide is heated with sodium hydroxide.
(iii) Acetone reacts with hydrogen in the presence of heated copper.
Answer: 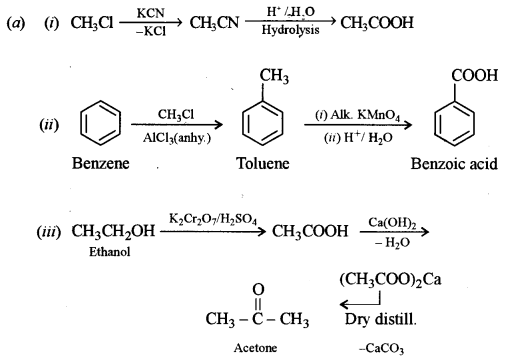 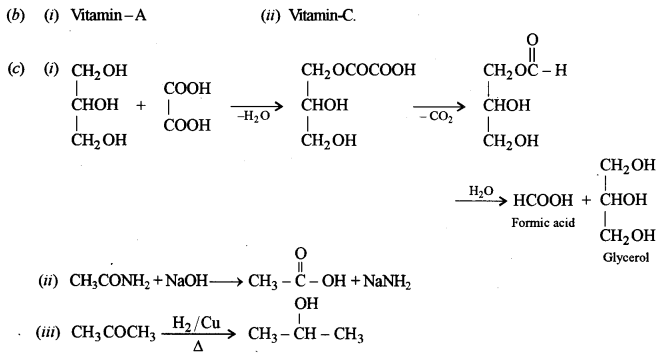 (b) Give one good chemical test to distinguish between the following pairs of organic compounds: [3]
(i) Benzaldehyde and acetone.
(ii) Methylamine and dimethylamine.
(c) Draw the isomers of 2-hydroxy propionic acid. [1]
(d) Give an example (equation) for each of the following name reactions: [3]
(i) Aldol condensation.
(ii) Reimer-Tiemann reaction.
(iii) Rosenmund’s reduction.
Answer:
(a) (i) A = CH3CHO
B = CH3CH2Br
C = CH3CH2CN
D = LiAlH4 or H2/Raney Ni
E = C3H7OH
F = CH3CH2COOH

(b) (i) The distinction between benzaldehyde and acetone:
Iodoform test: Acetone on treatment with NaOH/I2 (NaOI) gives yellow ppt. of Iodoform but benzaldehyde does not.

(ii) The distinction between methylamine and dimethylamine.
Carbylamine test: Methylamine (1° amine) when heated with ale KOH and CHCl3 gives the offensive smell of methylisocyanide. Dimethylamine (2°) does not give this test. 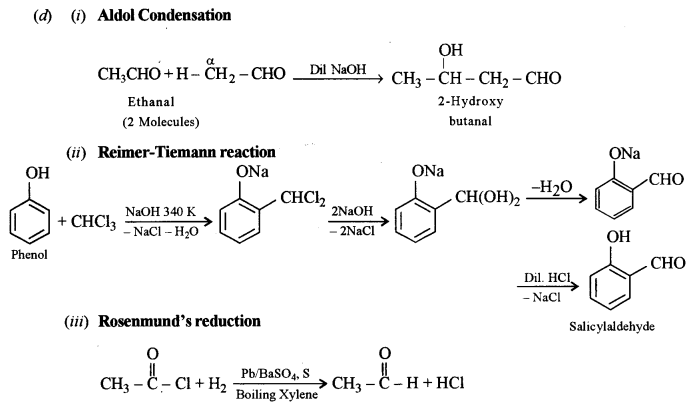 Question 10.
(a) An organic compound A has the molecular formula of C7H6O. When A is treated with NaOH followed by acid hydrolysis, it gives two products, B and C. When B is oxidised, it gives A. When A and C are each treated separately with PCl5, they give two different organic products D and E. [4]
(i) Identify A to E.
(ii) Give the chemical reaction when A is treated with NaOH and name the reaction.
(b) Draw a pair of isomers for each of the following and name the type of isomerism: [4]
(i) C4H10O
(ii) C2H2Cl2
(iii) CH3COCH3
(iv) C4H10O
(c) What are polyamides? Give one example of a polyamide and name its monomers.
Answer: 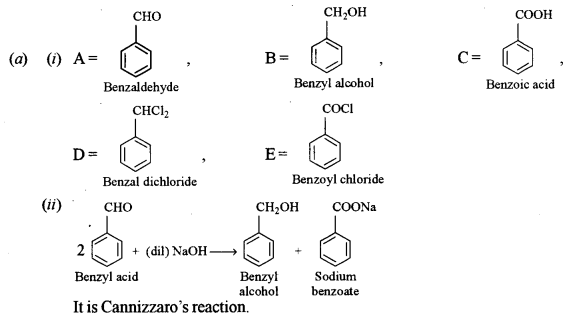