Question 1. [6 × 2]
Answer briefly each of the following questions :
(i) Give any two differences between Revaluation Account and Realization Account.
(ii) Mention whether the following Trade Parables are current liabilities or non-current liabilities :
Operating Cycle — Expected Period of Payment
(a) 12 months — 14 months
(b) 15 months — 12 months
(iii) What is the minimum price at which a company can reissue its forfeited shares which were originally issued at par ?
(iv) Give the adjusting entry and closing entry for interest on loan taken by a partner from the firm, when the firm follows the Fluctuating Capital Method.
(v) State two reasons for a company to purchase its own debentures from the open market.
(vi) Give the formula for valuation of goodwill by the Capitalisation of Average Profit Method.
Answer:
(i) Difference between the Revaluation and Realization Account.

(v) A company may purchase its own debentures from the open market either :
(a) as an investment or
(b) for immediate cancellation

Question 2. [12]
Saturn Ltd. was registered with an authorized capital of ₹ 12,00.000, divided into 1.20,000 equity- shares ₹10 each. It issued 40.000 equip shares to the public at a premium of ₹ 5 per share, payable as follows:
On application ₹ 6
On allotment ₹ 9 (including premium of ₹ 5)
All the shares were applied for and allotted. One shareholder holding 500 shares did not pay the allotment money and his shares were forfeited. Out of the forfeited shares, the company reissued 400 shares at ₹ 7 per share fully called up.
You are required to :
(a) Pass journal entries in the books of the company.
(b) Prepare:
(i) Securities Premium Reserve Account
(ii) Share Capital Account.
Answer: 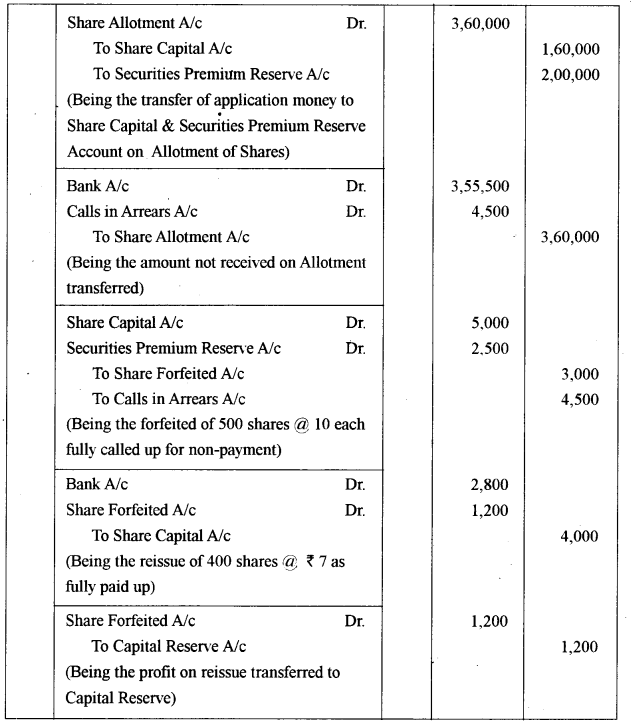 The investments were encased and the debentures were redeemed on the due date. It is the policy of the company to wTite off capital losses in the year in which they occur.

You are required to pass journal entries for issue and redemption of debentures (ignore interest on debentures). [8]
B. On 1st April, 2016. Krayon Ltd. issued 8,000, 12% Debentures of ? 100 each, redeemable at par after 5 years. The issue was fully subscribed. According to the terms of issue, interest on debentures is payable annually on 31st March. Tax deducted at source is 20%.

You are required to pass journal entries for the year 2016-17, regarding issue of debentures and interest on debentures. [4]
Answer: 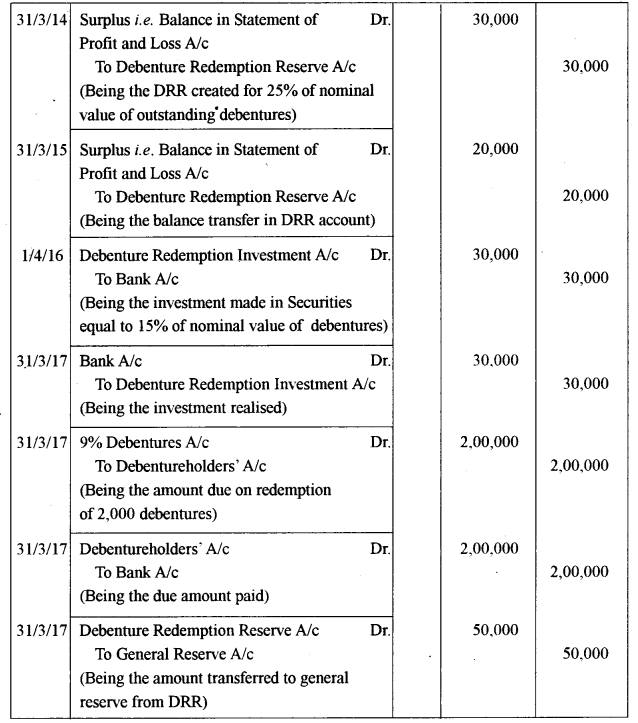 Question 4.
(A) Asif and Ravi are partners in a firm, sharing profits and losses in the ratio of 3:2. Their fixed capitals as on 1st April, 2016, were ₹6,00,000 and ₹ 4,00,000 respectively.
Their partnership deed provides for the following :
(a) Partners are to be allowed interest on their capital @ 10% per annum.
(b) They are to be charged interest on drawings @ 4% per annum.
(c) Asif is entitled to a salary of ₹ 2.000 per month.
(d) Ravi is entitled to a commission of 5% of the correct net profit of the firm before charging such commission.
(e) Asif is entitled to a rent of ₹ 3,000 per month for the use of his premises by the firm.
The net profit of the firm for the year ended 31 st March, 2017, before providing for any of the above clauses was ₹ 4,00,000. Both partners withdrew ₹ 5,000 at the beginning of every month for the entire year.
You are required to prepare a Profit and Loss Appropriation Account for the year ended 31st March, 2017. [8]

You are required to :
(i) Calculate the firm’s goodwill on the date of Mita’s death (show the working with the formula).
(ii) Pass the necessary journal entry to credit Mita’s Capital Account with her share of goodwill. [4]
Answer: 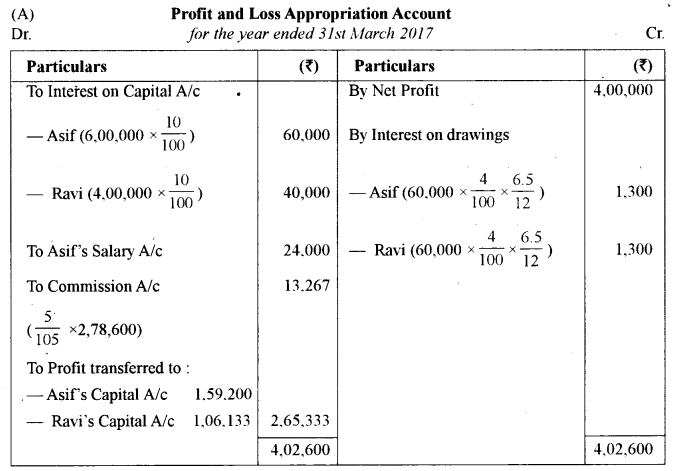 Question 5.
Annie and Bonnie are partners in a firm, sharing profits and losses equally. Their Balance Sheet as at 31 st March, 2017. was as follow :

Carl was to be taken as a partner for 1/4 share in the profits of the firm, with effect from 1st April, 2017, on the following terms :
(a) Bad debts amounting to ₹ 1,500 to be written off.
(b) Stock to be taken over by Annie at ₹ 12.000.
(t) Plant and Machinery to be valued at ₹ 50.000.
(d) Goodwill of the firm to be valued at ₹ 20.000.
(e) Carl to bring in ₹ 50.000 as his capital. He was unable to bring in cash, his share of goodwill.
(f) General Reserve not to be distributed. For this, it was decided that Carl would compensate the old partners through his current account.
You are required to :
(i) Pass journal entries on the date of Carl’s admission.
(ii) Prepare the Balance Sheet of the reconstituted firm.
Answer: 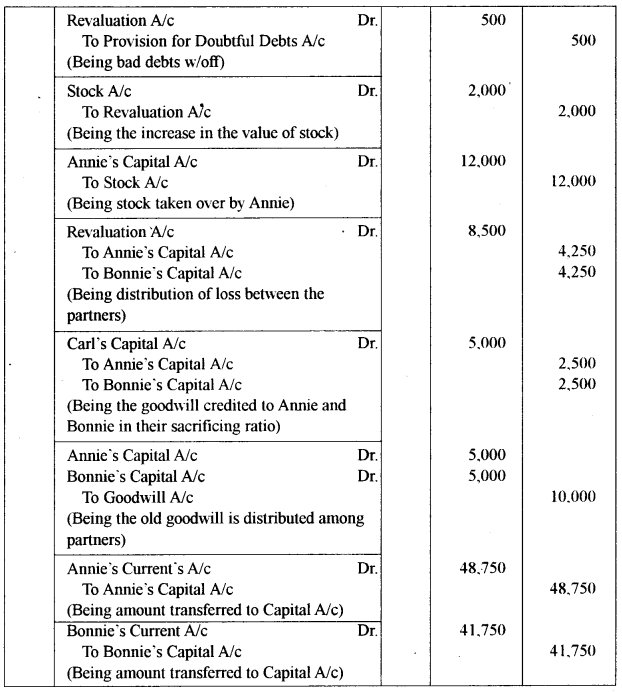 Question 6.
(A) Harish. Parcsh and Mahesh were three partners sharing profits and losses in the ratio of 5:4:1. Paresh retired on 31st March, 2017. His capital as on 1st April. 2016 was ₹ 80.000. During the year 2016-17. he made drawings of ₹ 5,000. He was to be charged interest on drawings of ₹ 100.
The partnership deed provides that on the retirement of a partner, he will be entitled to :
(i) His share of capital.
(ii) Interest on capital @ 10% per annum.
(iii) His share of profit in the year of retirement.
(iv) His share of goodwill of the firm.
(v) His share in the profit/loss on revaluation of assets and liabilities.
Additional Information:
(a) Paresh’s share in the profits of the firm for the year 2016-17 was ₹ 20.000.
(b) Goodwill of the firm was valued at ₹ 24,000.
(c) The firm suffered a loss of ₹ 12,000 on the revaluation of assets and liabilities.
(d) It was decided to transfer the amount due to Paresh to his loan account bearing interest @ 6% per annum. The loan was to be repaid in two equal annual installments, the first installment to be paid on 31st March. 2018.
You are required to prepare :
(i) Paresh’s Capital Account.
(ii) Paresh’s Loan Account till it is finally closed. [8]

(B) Parth, Angad and Leesha are partners in a firm sharing profits and losses in the ratio of 3:2:1 respectively. Angad retires and his claim, including his capital and entitlements from the firm including his share of Goodwill of the firm, is ₹ 50.000. After this amount was determined, it was found that there was an unrecorded piece of furniture valued at ₹ 12,000 which had to be recorded. Upon recording this piece of furniture, the revised amount due to Angad was determined and settled by giving him this piece of furniture and the balance in cash.
You are required to give the journal entries for recording the payment to Angad in the books of the firm. [4]
Answer: 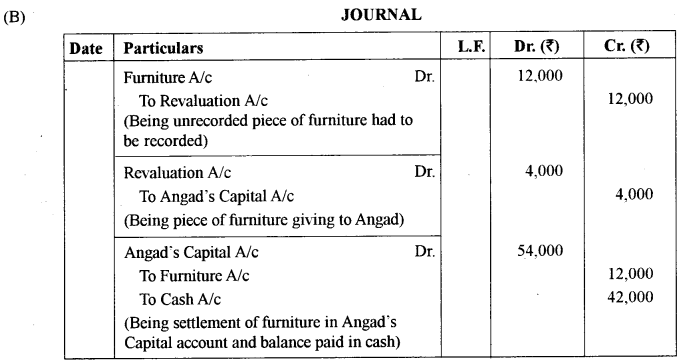 Question 7.
The following balances have been extracted from the books of Vanity Ltd. as at 31st March, 2017 : 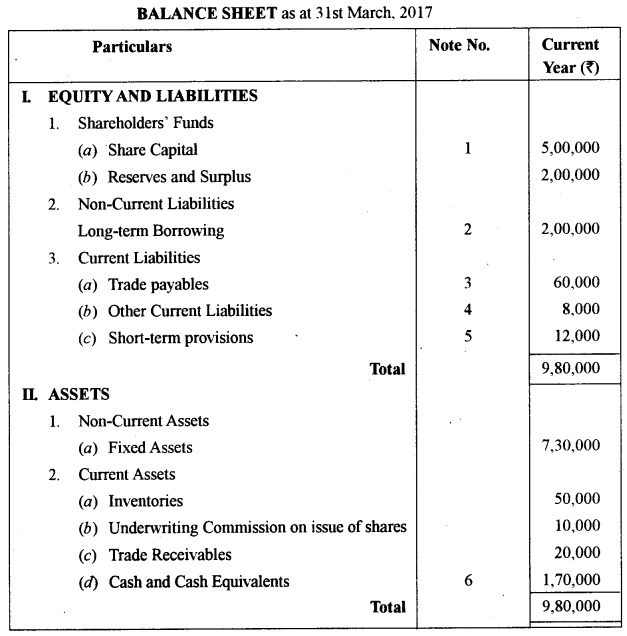 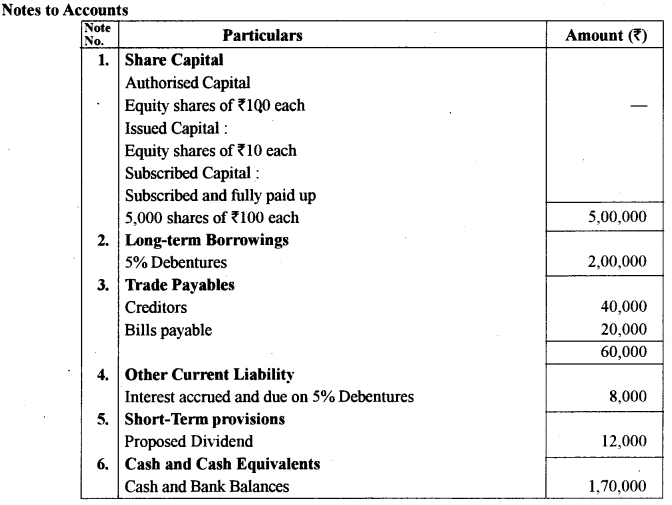 The partners decided to dissolve their partnership on 31st March, 2017.
The following transactions took place at the time of dissolution :
(a) Realization expenses of ?20,000 were paid by Susan on behalf of the firm.
(b) Geeta took over the goodwill for her own business at ₹ 40,000.
(c) Building was taken over by Rashi at ₹ 3,00.000.
(d) Only 80% of the debtors paid their dues.
(e) Furniture was sold by ₹ 97,000.
(f) Bank Loan was settled along with interest of ₹ 5,000.
You are required to Prepare the Realization Account. [8]
(B) The Capital accounts of Amar and Harsh stood at ₹ 20,000 and ₹ 30,000 respectively after the nesessary adjustments in respect of drawings and net profit for the year ended 31st March, 2017. It was subsequently ascertained that interest on capital @ 12% per annum was not taken into account while arriving at the divisible profits for the year.
During the year 2016-17, Amar had withdraw in ₹ 2,000 and Harsh’s drawings were ₹ 1,000. The net profit for the year amounted to ₹ 15,000.
The partners shared profits and losses in the ratio of 3:2.
You are required to pass the necessary journal entries to rectify the error in accounting. [4]
Answer: 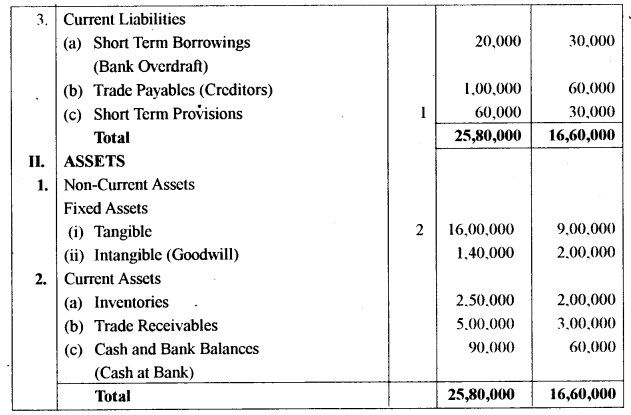 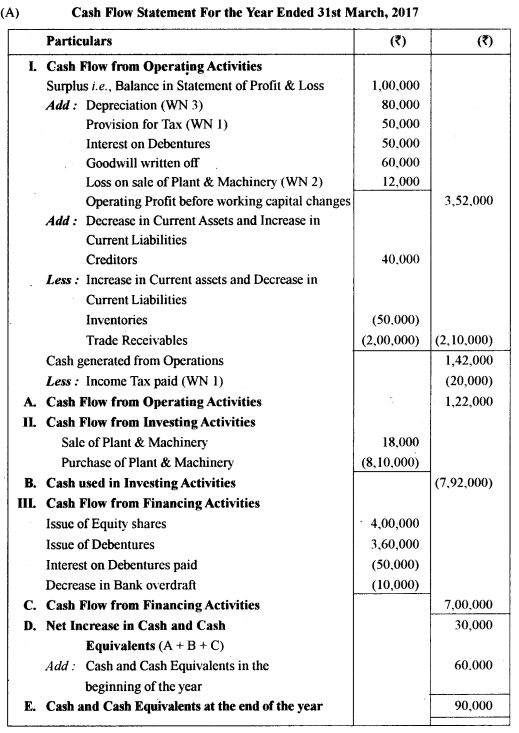 Question 10.
A. Give any two differences between horizontal analysis and vertical analysis of financial statements. [2]
B. The Quick Ratio of a company is 0.8:1. State whether the Quick Ratio will improve, decline or will not change in the following cases :
(i) Cash collected from Debtors ₹ 50.000.
(ii) Creditors of ₹ 20,000 paid off. [2]
C. From the following information, prepare a Common Size Statement of Profit and Loss of Prudence Ltd. for the year ending 31st March. 2017. [6]

Answer:
A. Difference between Horizontal and Vertical Analysis 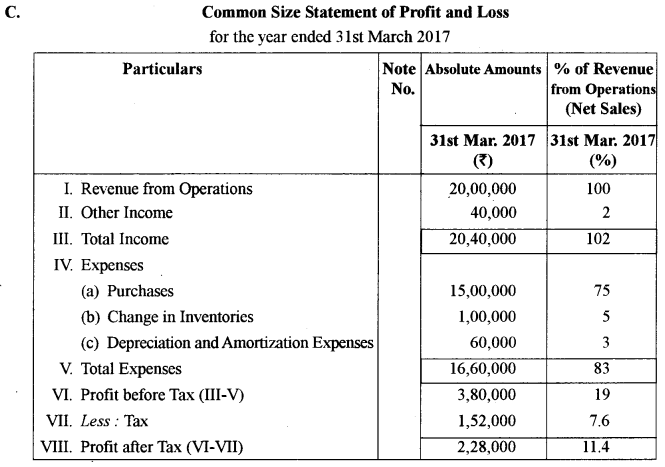 Question 11.
(A) Calculate the Net Profit Ratio (up to two decimal places) from the following information : [2] 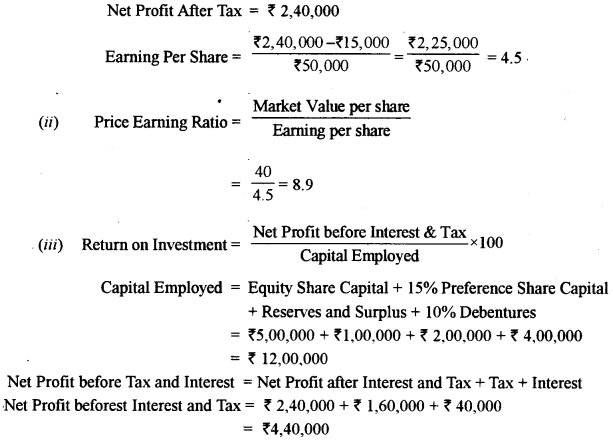 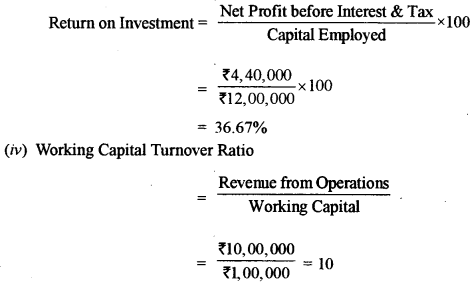