Question 1.
Answer briefly each of the following questions : [6 x 2]
(i) What is a contingent liability ? How are contingent liabilities shown in the Balance Sheet of a company prepared as per Schedule III of the Companies Act 2013 ?
(ii) Why is abnormal loss not recorded in the books of a Joint Venture ?
(iii) Give the formula for calculating the outgoing partner’s share in the interim profits of the firm, on the basis of sales made by the firm.
(iv) How is Workmen Compensation Fund, shown in the Balance Sheet of a partnership firm, treated at the time of its dissolution ?
(v) Give any two differences between Reserve Capital and Capital Reserve.
(vi) Give the adjusting entry and closing entry for interest on debentures due to the debenture holders of a company.
Answer:
(i) A liability that might arise on happening of an event in future is known as contingent liability. They are separate shown in the Notes to Accounts’ not in the Balance Sheet.

(ii) Abnormal loss is not recorded in the Joint Venture because the loss automatically gets adjusted as the difference betw een sales and cost of the goods and if insurance claim is received then the loss is minimized.

(iv) It is distributed among the partners in their profit sharing ratio.

Question 2. [12]
Anil and Saji entered into a joint venture to buy and sell old machines. They decided to share profit and losses in the ratio of 3:2.
Anil purchased 200 machines at ₹ 3,000 each and sent them to Saji for sale.
Anil incurred ₹ 26,000 on freight and transit insurance.
Saji took delivery of the machines and incurred ₹ 24,000 as clearing charges and ₹ 6,000 as selling expenses.
Anil drew a bill on Saji for ₹ 4,00,000 which was accepted by Saji. The bill was discounted by Anil for ₹ 3,90,000 with the bank.
Saji was able to sell 190 machines at ₹ 3,850 per machine.
The unsold machines were taken by Anil for his next venture at the original cost plus proportionate non-recurring expenses less 10%.
Saji was entitled to a commission of 2% on the sales made by him.
The co-ventures settled their accounts by means of a bank draft.
It was decided that Anil would maintain a record of all the transactions.
You are required to pass journal entries in the books of Anil.
Answer: 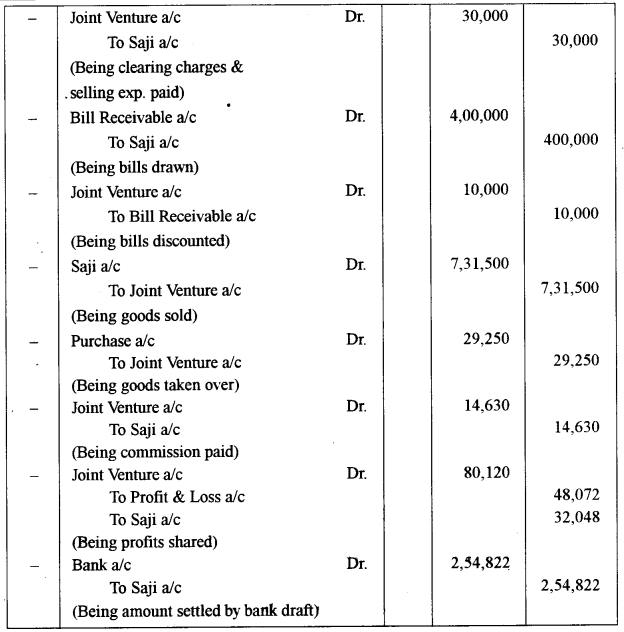 Question 3. [12]
During the year 2014-15, A.B.C. Ltd. issued 10,000 Equity shares of ₹ 50 each at ₹ 55 per share, payable as follows:
On Application ₹ 15
On Allotment ₹ 20 (including premium ₹ 5)
On 1st and Final Call ₹ 20
All the issued shares were subscribed for by the public.
One shareholder holding 500 shares did not pay the amount due on allotment and his shares were immediately forfeited.
Another shareholder holding 100 shares paid the amount of the 1st and Final Call with allotment. After the company had made the 1st and Final Call, 200 of the forfeited shares were reissued as fully called up at ₹ 45 per share.
The share issue expenses were ₹ 7,000 which were written off at the end of the year.
You are required to pass journal entries in the books of the company for the year ending 31st March, 2015.
Answer: 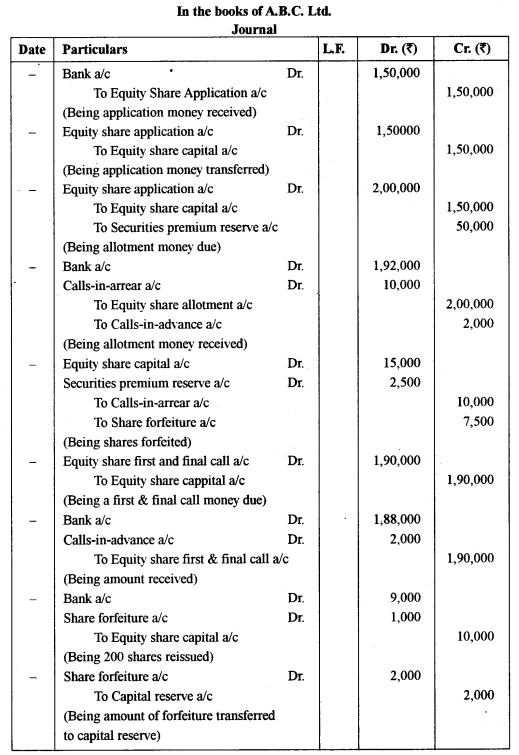 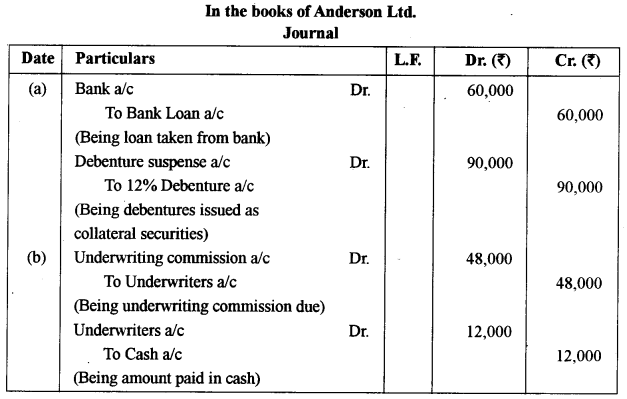 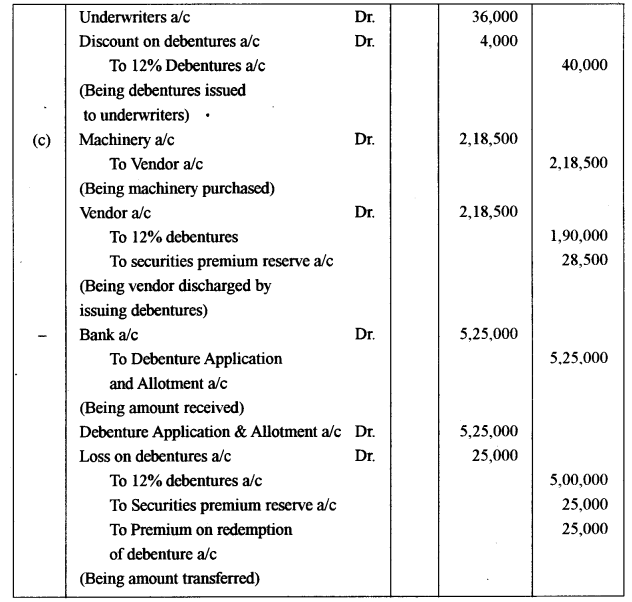 The partners decided that with effect from 1st April, 2015, they would share profits and losses equally.
For this purpose, they decided that:
(a) Investments to be valued at ₹ 60,000.
(b) Goodwill to be valued at ₹ 24,000.
(c) General Reserve not to be distributed between the partners.
You are required to :
(i) Pass journal entries
(ii) Prepare the revised Balance Sheet of the firm.
Answer: 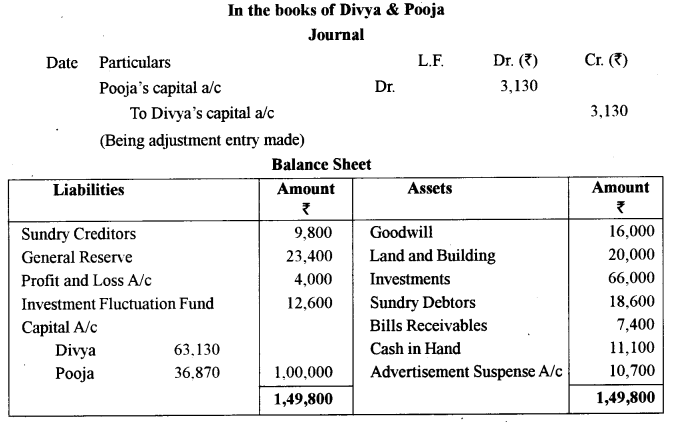 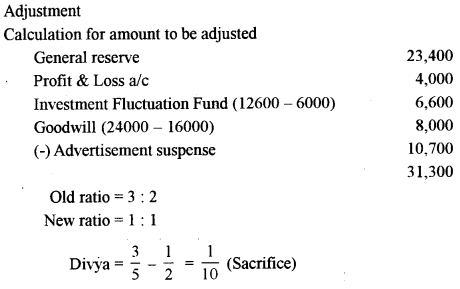 Question 6.
(a) Pinnacle Instruments Ltd. registered itself with a capital of? 20,00,000 divided into Equity Shares of ₹ 100 each. [9]
On 1st June, 2014, the company issued 5,000 Equity Shares as fully paid to Mila Herbals, as purchase consideration for the purchase of plant and machinery.
The remaining shares were issued to the public at par.
Till the date of the Balance Sheet, the Directors had called from the public,
60% of the nominal value of the shares.
The amount called was received by the company.
You are required to prepare as at 31st March, 2015 :
(i) The Balance Sheet of Pinnacle Instruments Ltd. as per Schedule III of the
Companies Act, 2013.
(ii) Notes to Accounts.
(b) Under which heads and sub-heads will the following items appear in the Balance Sheet of a company as per Schedule IE of the Companies Act, 2013. [3]
(i) Public Deposits
(ii) Calls-in-Advance
(iii) Building under construction
Answer: 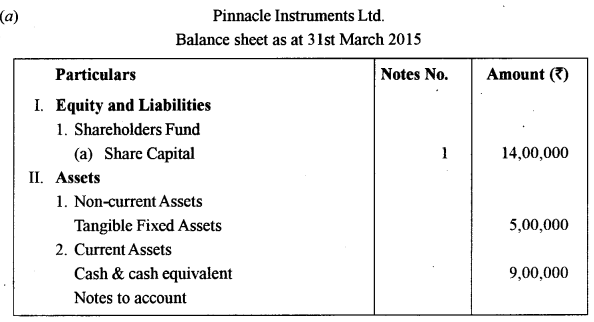 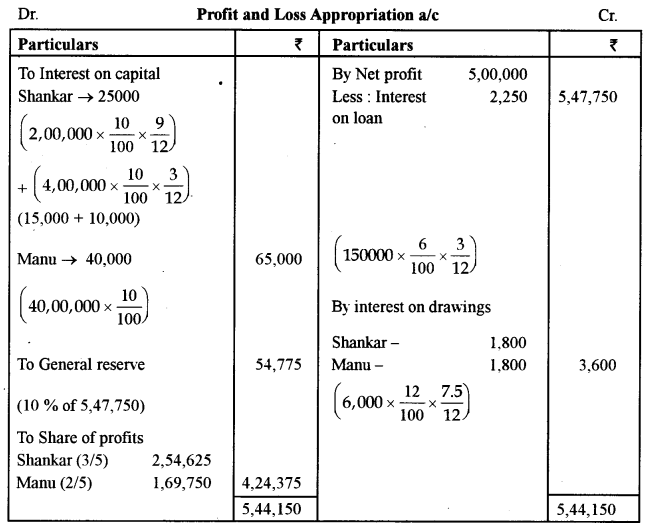 Nita retires on 1st April, 2015, subject to the following adjustments:
(a) Land and building to be reduced by 10%.
(b) Goodwill to be valued at ₹ 54,000.
(c) Provision for Doubtful Debts to be raised to 10% of the debtors, the excess provision being created from General Reserve. The balance of the General Reserve to be distributed amongst the partners.
(d) Creditors of ₹ 3,000 were paid by Pihu for which she is not to be reimbursed.
(e) The continuing partners to share profits and losses in future in the ratio of 5:4.
(J) Nita to be paid ₹ 29,800 on retirement and the remaining amount in two equal annual installments
together with interest @ 10% per annum on the outstanding balance. The first installment of Nita’s loan to be paid on 31st March, 2016.
You are required to prepare:
(i) Revaluation Account.
(ii) Partners’ Capital Accounts.
(iii) Nita’s Loan Account till it is finally closed.
Answer: 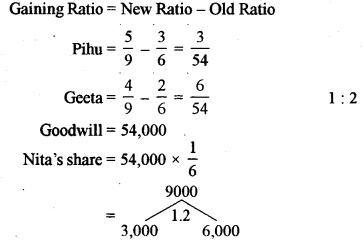 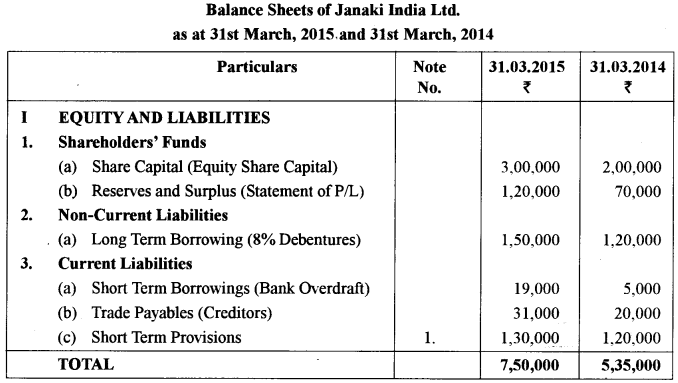 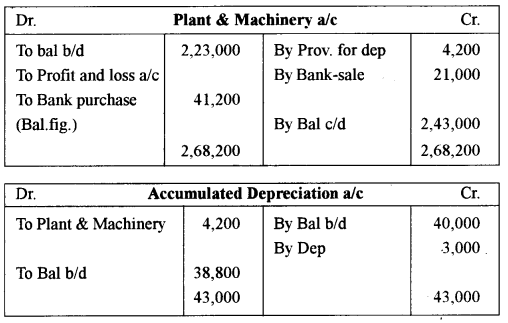 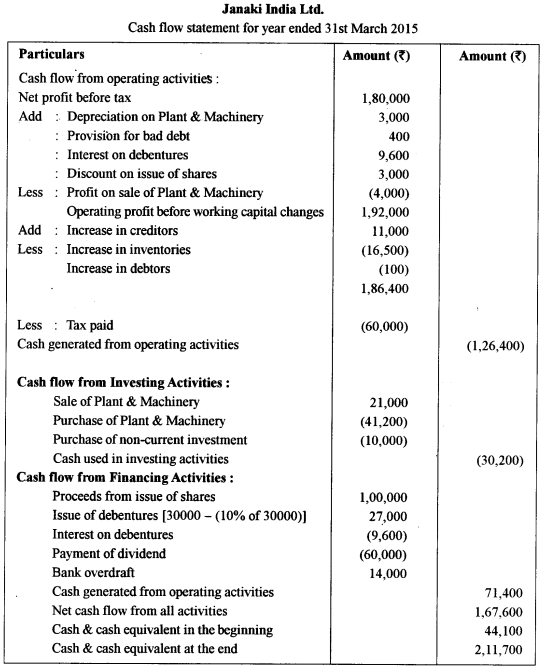 Question 10.
(a) What is a Common Size Balance Sheet ? [2]
(b) While preparing a Cash How Statement, identify the following transactions as belonging to Operating Activities, Investing Activities, Financing Activities: [2]
(i) Goodwill written off.
(ii) Interest received by a company on its investments.

Answer:
(a) A common size balance sheet shows the percentage relationship of each assets/liability to total assets/total liabilities including capital.
(b) (i) Operating activities
(ii) Investing activities 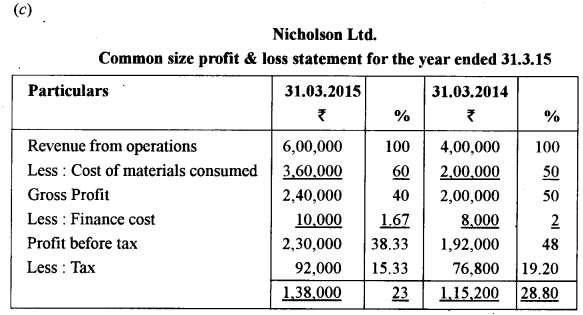 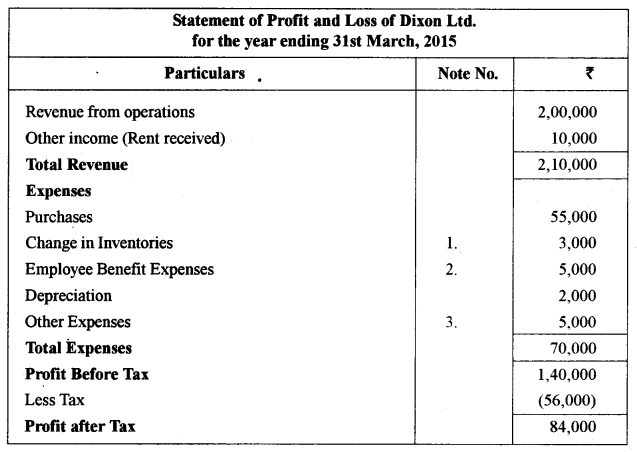 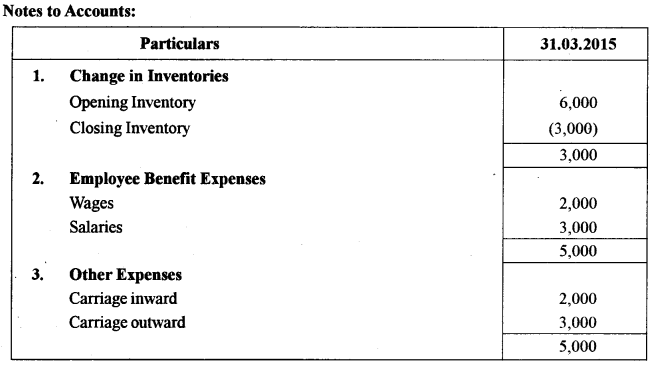 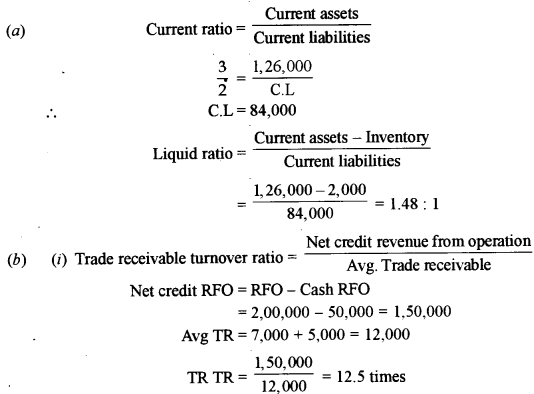 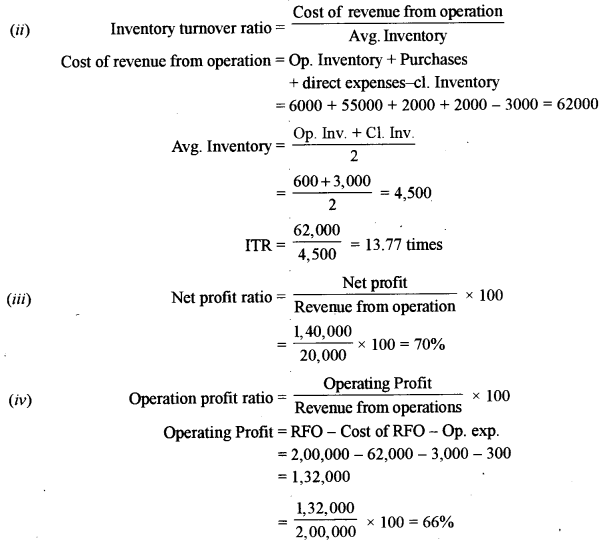