Question 1.
Answer the following questions very briefly and to the point: [6 x 2]
(i) What is meant by an operating cycle ?
(ii) State one difference between partner’s loan account and partner’s capital account.
(iii) Give the adjusting entry and the closing entry for recording commission allowed to a partner, when the firm follows the fixed capital method. ,
(iv) How will the firm record the payment of realization expenses which were to be borne by a partner, but paid by the firm on his behalf ?
(v) Give the accounting treatment in the books of a co-venturer under the Memorandum Joint | Venture Method, when he takes over the unsold stock.
(vi) What is the minimum price at which a company can reissue its forfeited shares which were originally issued at par ?
Answer:
(i) The operating cycle is the average period of time required for a business to make an initial outlay . of cash to produce goods, sell the goods, and receive cash from customers in exchange for the goods.

(ii) Partner’s capital account is his contribution (equity) towards partnership. It is initial and, subsequent contributions by partner to the partnership, in the form of either cash or the market value of other types of assets.

While running a business, one or more of the owners or partners will lend the business money to keep it afloat during a rough time or to increase cash flow and fund growth. This is treated as Partner’s loan account. Interest may also be paid on this account as per the agreement of partnership contract.

(iv) When the actual expenses are paid by the firm on behalf of a partner the following entry will be recorded:
Partner’s capital A/c Dr
To Bank A/c

(vi) When the forfeited shares are reissued at a discount, the amount of discount should not exceed the amount credited to Share Forfeited Account. If the discount allowed on reissue of shares is less than the forfeited amount, there will be some balance left in the Forfeited Account, which should be transferred to capital reserve, because it is a profit of capital nature.

Question 2. [12]
From the given trail Balance, prepare the Balance Sheet of Moonlight Limited as at 31st March, 2014. 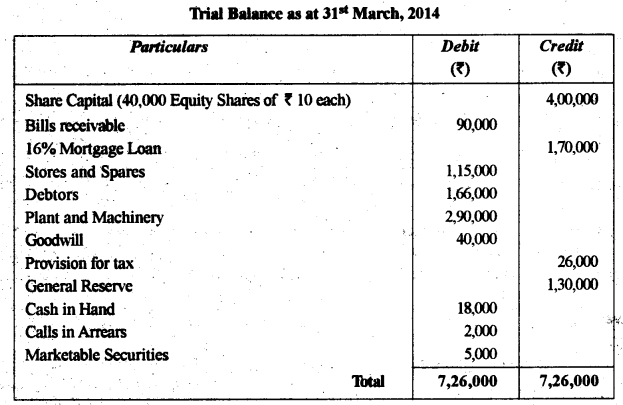 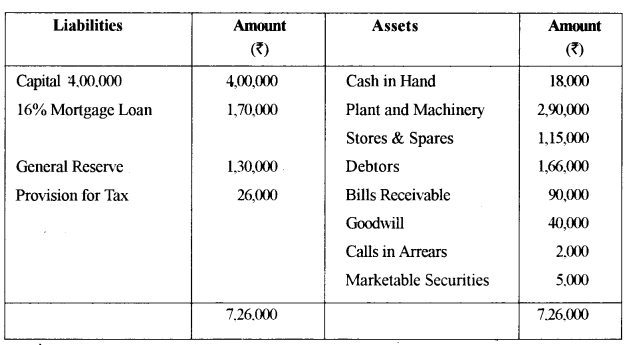 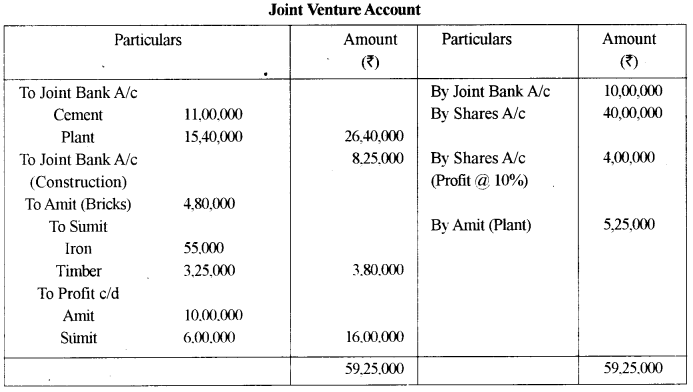 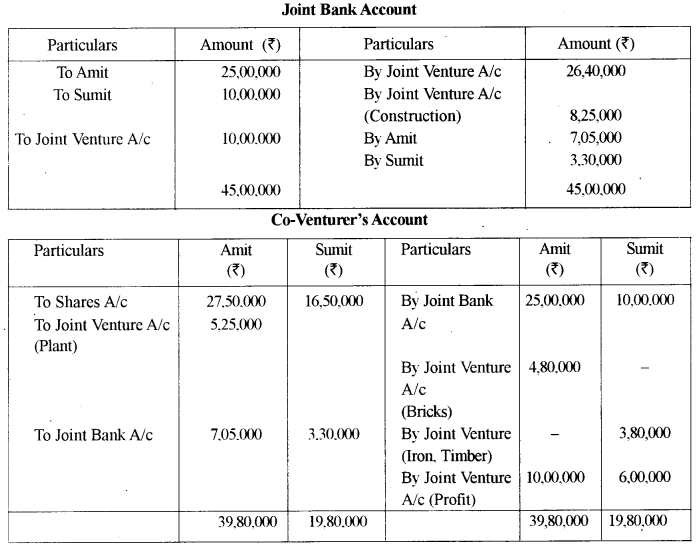 Karim was to be taken as a partner with effect from 1st April. 2014. on the following terms :
(a) The new profit sharing ratio of Gautam. Rahul and Karim would be 5 : 3 : 2.
(b) Provision for Doubtful Debts would be raised to 20% of debtors.
(c) Karim would bring in cash, his share of capital of ₹ 40,000 and his share of goodwill valued at ₹ 10,000.
(d) Gautam would take over the furniture at ₹ 22,000.
You are required to:
(i) Pass journal entries at the time of Karim’s admission.
(ii) Prepare the Balance Sheet of the reconstituted firm.
Answer: 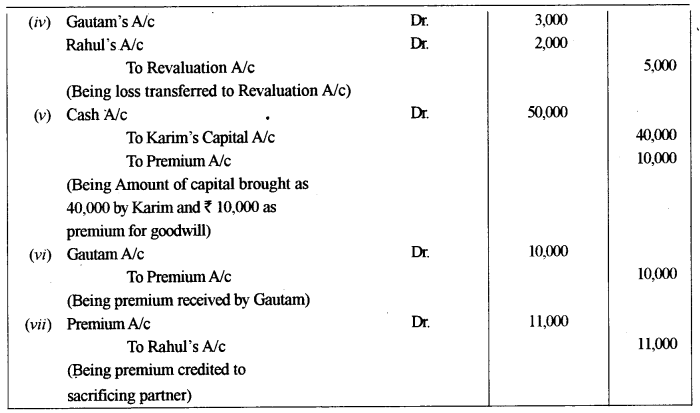 Krishna died on 30th September, 2014. An agreement was reached amongst Ram. Mohan and Krishna’s legal representative that:
(a) Goodwill to be valued at 2 years purchase of the average profits of the previous three years,
which were:

(b) Trade marks to be revalued at ₹ 19.200; plant at 80% of its book value and land building at ₹ 57,600.
(c) Krishna’s share of profit to the date of his death to be calculated on the basis of previous year’s profit.
(d) Interest on capital to be provided @ 10% per annum.
(e) ₹ 60,080 to be paid in cash to Krishna’s legal representative and balance to be transferred to the legal representative’s loan account.
You are required to prepare:
(i) Revaluation Account
(ii) Krishna’s Capital Account
(iii) Krishna’s Legal Representative’Account
Answer: 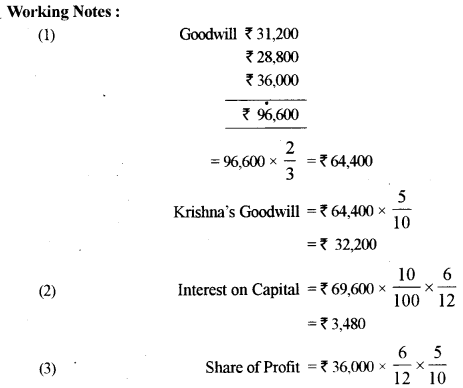 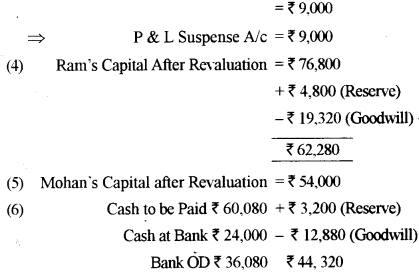 Question 6. [12]
Pluto Ltd. issued 20,000 Equity shares of ₹ 10 each, payable as follows :
On Application — ₹ 4
On Allotment — ₹ 1
On 1st Call — ₹ 3
On 2nd and Final Call — ₹ 2
Applications were received for 30,000 shares and prorata allotment was made to all the applicants. Excess money received on application was utilized towards allotment and subsequent calls.One shareholder holding 100 shares did not pay the final call and his shares’were forfeited. Of the forfeited shares, the company reissued 70 shares as fully paid up at ₹ 12 per share.
You are required to pass journal entries in the books of the company for the year ending 31st March, 2014.
Answer: 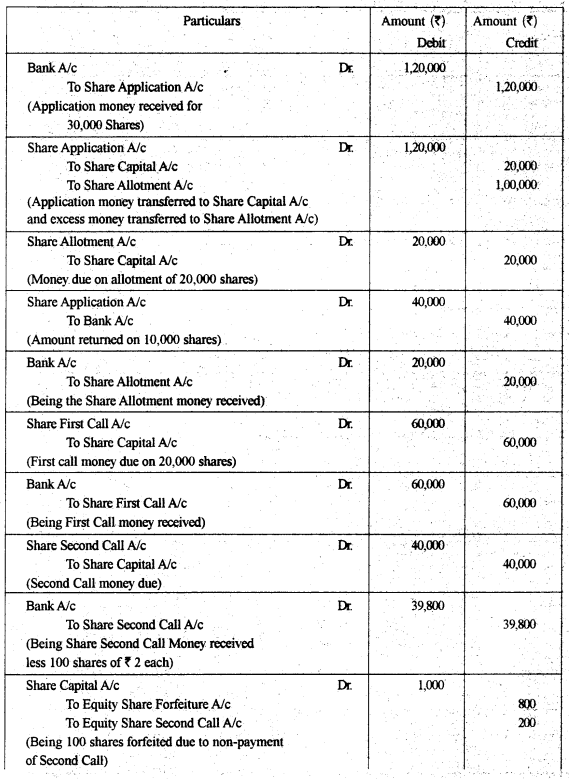 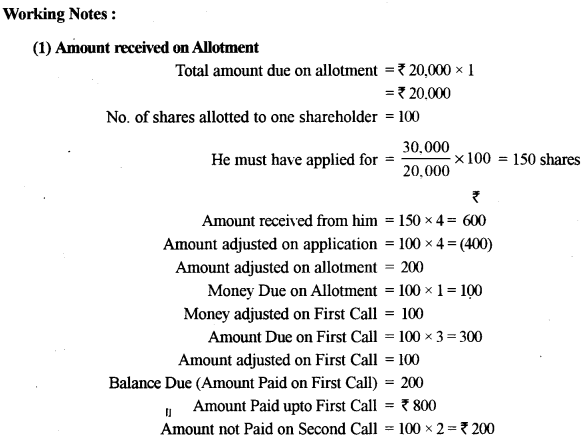 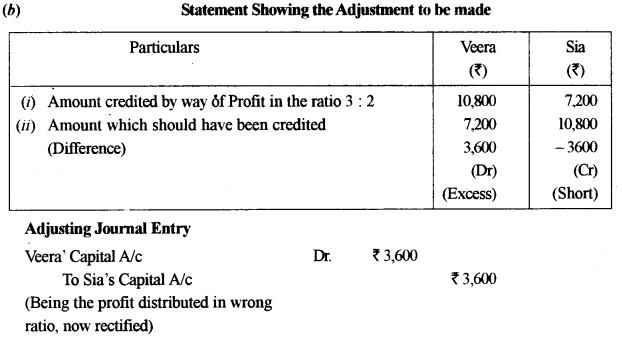 Question 8. [12]
On 1st April, 2013, Sunshine Ltd. issued ₹ 10,00,000, 15% Debentures of ₹ 100 each at 8% discount payable :
₹ 40 on application.
The balance on allotment.
These debentures were to be redeemed at a premium of 5% after five years. All the debentures were subscribed for by the public.
Interest on these debentures was to be paid half-yearly which was duly paid by the company.
You are required to:
(i) Pass journal entries in the first year of debenture issue (including entries for debenture interest)
(ii) Prepare the 15% Debenture Account for the year ending 31st March,2014.
Answer: 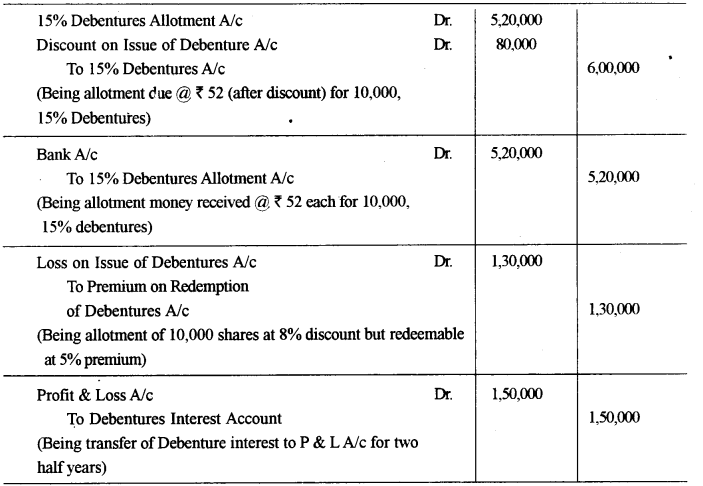 Section – B
(Answer any two questions) 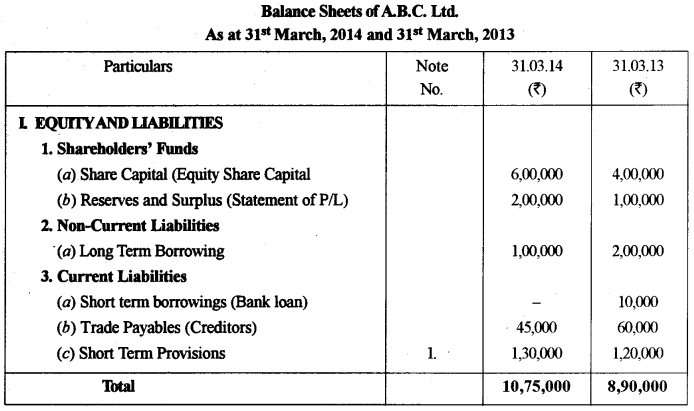 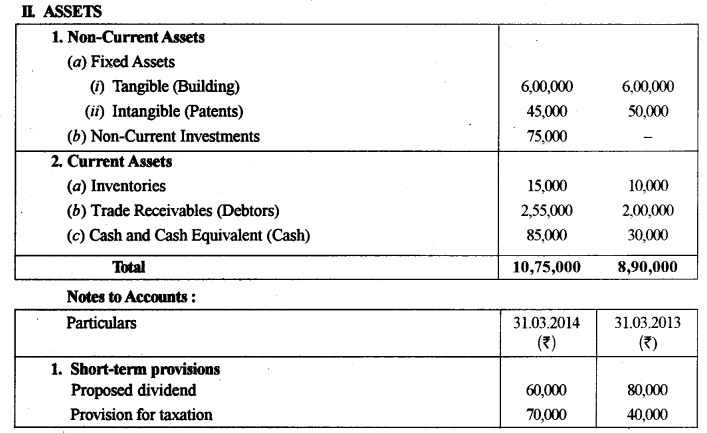 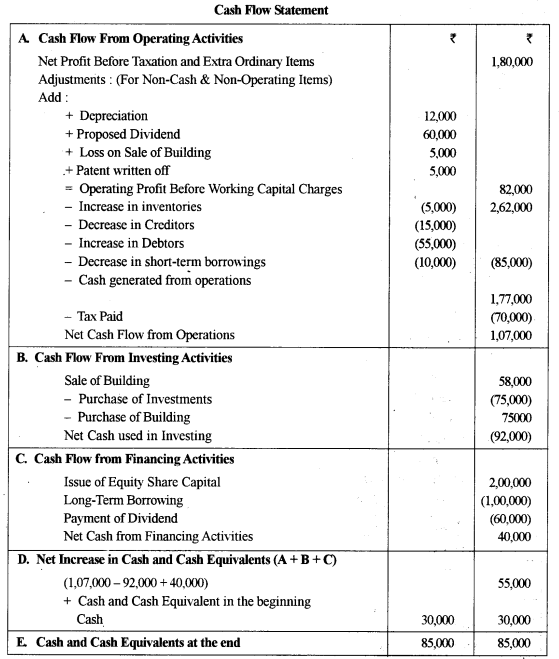 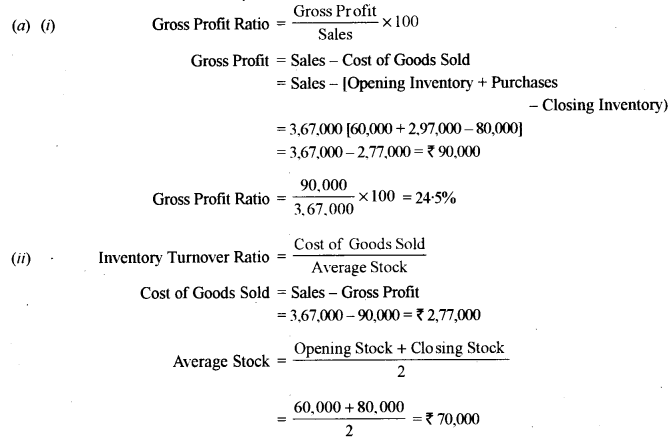 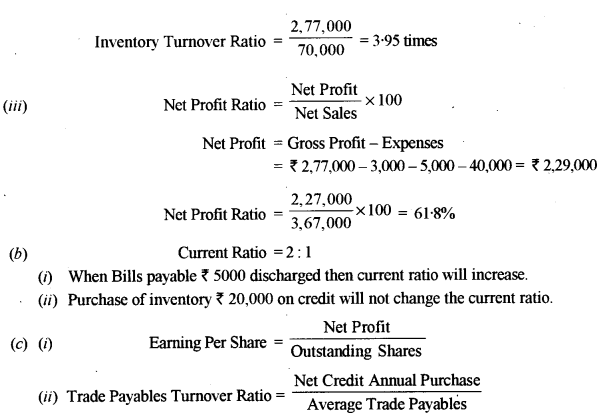