Question 1.
Answer the following questions very briefly and to the point: [2 × 15]
(i) Name the two accounts prepared to show the results of a joint venture when each co-venturer records all transactions.
(ii) Give any two differences between fixed capital method and fluctuating capital method.
(iii) What is the accounting treatment when debentures are issued as a collateral security ?
(iv) Give any two differences between Revaluation Account and Realization Account.
(v) State with reason their a company can issue a share having a face value of ₹20 at ₹17.
(vi) Give the adjusting and closing entry for interest on calls in arrears due from a share holder.
(vii) State the provisions of the Indian Partnership Act, 1932, regarding charging of interest on drawings from a partner when :
(a) The firm has a partnership deed.
(b) The firm does not have a partnership deed.
(viii) What is meant by number of years purchase in the valuation of firm’s goodwill ?
(xi) List any four items that may have to be deducted from a deceased partner’s captial account while computing the amount payable to his legal representatives.
(x) Why is premium received on the issue of debentures considered a capital profit ?
Answer:
(i) (a) Memorandum Joint Venture Account.
(b) Joint Venture with Account.

(ii) The differences between fixed capital and fluctuating capital are :

(viii) Number if year’s purchase in the valuation of goodwill represents an estimated number with which average profit or super profit is to be multiplied for the purpose of calculating the value of goodwill.
It may also specify the number of y ears a firm may be expected to earn the same amount of profits in the coming years.

(ix) The following items may be deducted from a deceased partners’ capital account:
(a) Profit & Loss (Debit balance)
(b) Drawings
(c) Interest on drawings
(d) Old goodwill written off

(x) Premium received on the issue of debentures as a capital profit because it is not received in the normal course of business or it is not relating to the day to day operations of a business.

Question 2.
Ronnie and Annie entered into a Joint Venture to sell coal, sharing profits and losses in the ratio of 1:1. Annie purchased 100 tonnes of coal @ 5,400 per tonne and paid ₹ 30,000 as freight for sending the coal to Ronnie to the sold joint account.
During transit, 10 tonnes of coal was lost due to breaking in bulk (normal loss). Ronnie received the remaining tonnes of coal and paid ₹ 6,000 as landing charges. He accepted a bill drawn by Annie for ₹ 2,00,000.
Ronnie then sold 60% of the coal received by him for ₹ 4,21,200. His selling expenses amounted to ₹ 12,000.
The remaining stock, valued at original cost plus proportionate direct expenses, was shared equally by both the co-ventures. They settled their accounts by means of a bank draft.
(i) Total sales were ₹ 1,80,000 of which 50% were sold on credit and the remaining 50% were sold for cash.
(ii ) Expenses amounted to ₹ 1,500 towards go down rent and advertisements.
(iii) Bad debts were ₹ 1,500.
You are required to :
(i) Memorandum Joint Venture Account.
(ii) Ronnie’s Account in the books of Annie.
Answer:

Question 3.
Mitra Ltd. invited applications from the public for the issue of 60,000 shares of
₹ 10 each, at a discount of 10%, payable as ;
₹ 3 per share on application.
₹ 5 per share on allotment.
Balance on call.
The public subscribed for 50,000 shares ₹ 2,49,000 were received by the company on allotment and ₹ 49,400 on call. The company forfeited those shares on which both, allotment and call money was not received. 7% of the forfeited shares were reissued at ₹ 7 per share, hilly called up.
The company had ₹ 45,000 in its Security Premium Reserve Account which it used to write off any miscellaneous expenditure incurred during the year.
You are required to pass the necessary journal entries to record the above transactions. [12]
Answer: 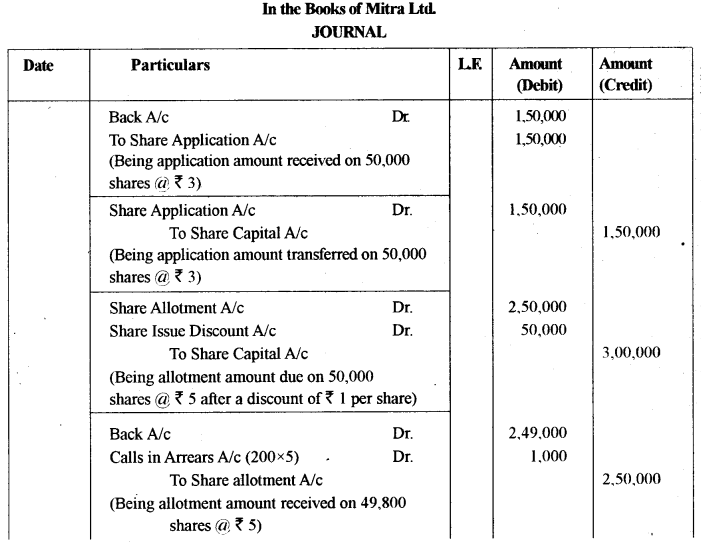 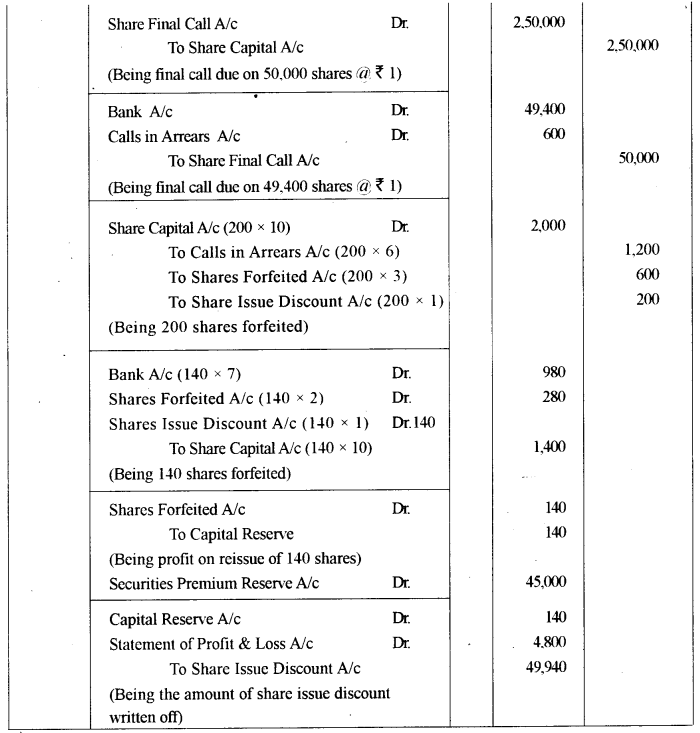 Question 4.
Angad, Kunal and Nitin were partners sharing profit and losses in the proportion of 2 : 2 : 1 respectively. The Balance Sheet of their firm as on 31st March, 2013, stood as follows :

Kunal retires on 1st April, 2013, subject to the following adjustments :
(a) Provision for bad and doubtful debts to be increased by ₹ 975.
(b) Stock to be appreciated by 20% and Building by 10%.
(c) Machinery to be depreciated by 10% and Motor Van by 15%.
(d) Goodwill of the firm to be valued at ₹ 9,000.
(e ) The capitals of the continuing partners are to be adjusted according to the new profit sharing ratio which is agreed between Angad and Nitin as 3 : 2 respectively.
(f) Excess or shortfall in Angad’s and Nitin’s Capital Accounts to be transferred to their respective Current Accounts.
You are required to prepare
(i) Revaluation Account.
(ii) Partners’Capital Accounts.
(iii) Balance Sheet of the reconstituted firm. [12]
Answer:

Question 5.
Rahim and Sudesh, the two partners of a business firm, agreed to appropriate the profits of their firm on the following terms :
(a) Interest is payable on capital @ 5% pcr annum.
(b) Rahim will be entitled to a salary of ₹ 500 per month.
(c) Interest on loan to be given by the firm to the partners @ 10% per annum.
(d) Interest on drawings to be charged from the partners @ 5% per annum.
(e) Sudesh will get commission @ 1% on the sales made during the year.
(f) Rahim is entitled to a tent of ₹ 25,000 per annum for allowing the firm to carry on the business in his premises. [12]
The net profit of the firm for the year ended 31st March, 2013, was ₹ 1.80,000 before taking into account any of the above terms. 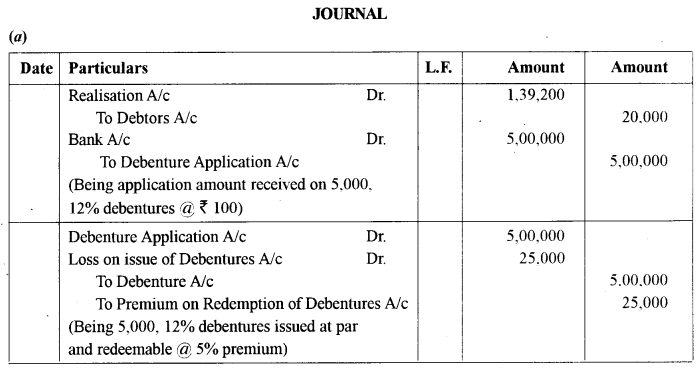 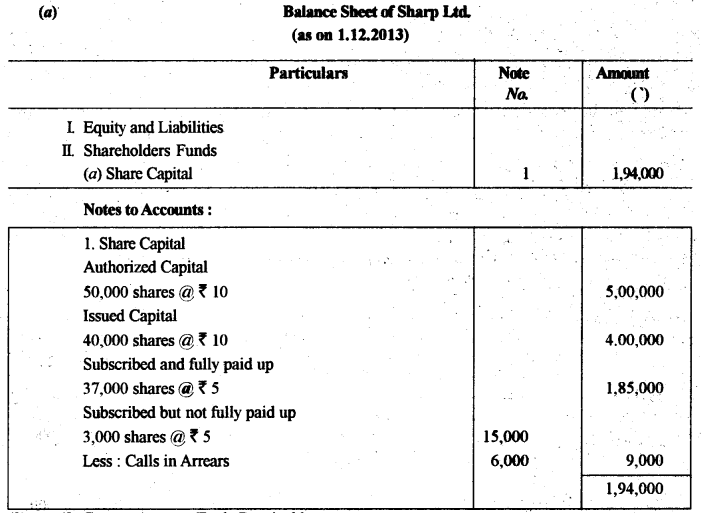 Question 8.
Aman and Harsh were partners in a firm. They decided to dissolve their firm. Pass necessary journal entries for the following after various assets (other than Cash and Bank) and third party liabilities have been transferred to Realisation A/c. [10]
(a) There was furniture worth ₹ 50,000. Aman took over 50% of the furniture at 10% discount and the remaining furniture was sold at 30% profit on book value.
(b) Profit and Loss Account was showing a credit balance of ₹ 15,000 which was distributed between the partners.
(c) Harsh’s loan of ₹ 6,000 was discharged at ₹ 6,200.
(d) The firm paid realization expenses amounting to ₹ 5,000 on behalf of Harsh who had to bear these expenses.
(e) There was a bill for ₹ 1,200 under discount. The bill was received from Soham who proved insolvent and a first and final dividend of 25% was received from his estate.
(f) Creditors, to whom the firm owed ₹ 6,000, accepted stock of ₹ 5,000 at a discount of 5% and the balance in cash.
(h) The loss on dissolution was ₹ 8,000.
Answer: 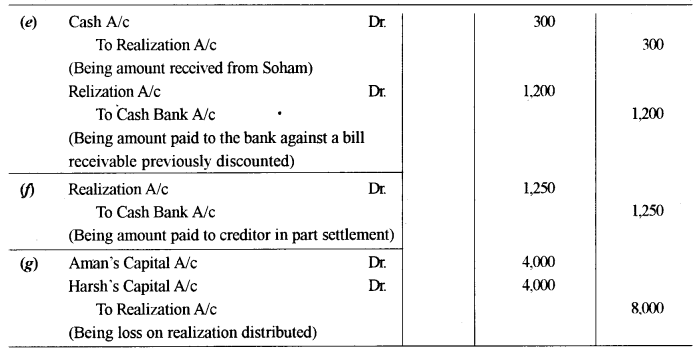 Question 9.
(a) How does the quality of Ratio Analysis of a business depend upon the accuracy of its financial statements ? [2]
(b) From the following information, calculate Trade Receivables Turnover Ratio : [2]
Particulars
Credit Revenue from Operations ₹ 9,60,000
Gross Debeotrs ₹ 1,90,000
Bills Receivable ₹ 50,000
Provision for Doubtful Debts ₹ 10,000
(c) From the following information, calculate the following ratios up to two decimal (faces) : [6]
(i) Debt-Equity’ Ratio
(ii) Interest Coverage Ratio
(iii) Proprietary Ratio

Question 10.
From the following data prepare a Common Size Balance Sheet of Teak Wood Ltd. [10]
(Note : Current year’s figures appear in the first column and the previous year’s figures are in the second column.) 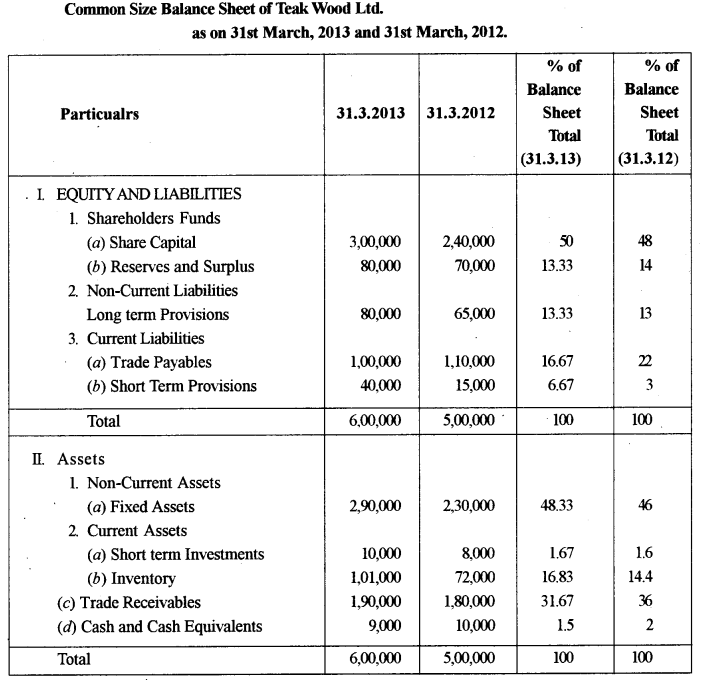 Question 11.
(a) State with reason whether the following would result in inflow, outflow or no flow of cash : [10]
(i) Charging depreciation on furniture.
(ii) Cash withdrawn for bank for office use.
(b) From the following extracts of a company’s Balance Sheets, calculate for the year ending 31st March, 2013 :
(i) Cash from investing activities
(ii) Cash from financing activities.
(Note : Current year’s figures appear in the first column and the previous year’s figures are in the second column.)

(b) (i) Calculation of cash from investing activities 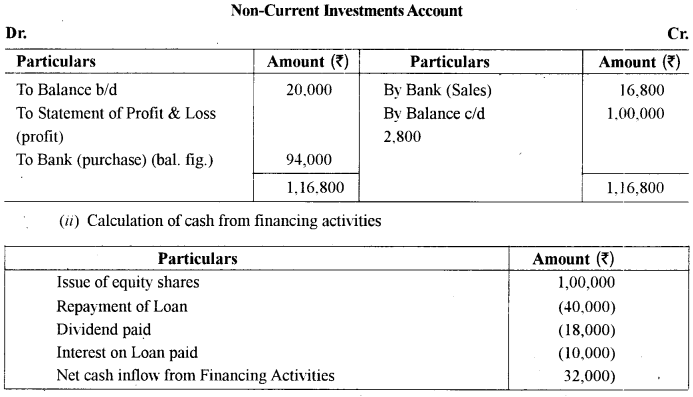 Question 12.
(a) Mention any two demerits of using electronic spreadsheets.
(A) Write a formula in spreadsheet for calculating the “Take Home Pay” under the given condition:
Salary is more than ₹ 50,000 then the “Take Home Pay ” is 80%.
(c) How would you create a filter for data stored in a column in a spreadsheet ?
(d) State the steps involved in merging two cells in a spreadsheet.
(e) What is the difference between the functions AVERAGEA () and AVERAGEIFS () ?