Question 1.
Answer each of the following questions briefly : [10 × 2]
(i) State two differences between Bin Card and Stores Ledger.
(ii) What is a cost unit ?
(iii) Name the two accounts which are prepared, when each co-venture keeps a record of his own transactions only in his books.
(iv) State two differences between Sectional Balancing and Self Balancing.
(v) How will you deal with the following items in the absence of a partnership deed :
(a) Interest on Capital
(b) Interest on Drawings
(c) Interest on Partner’s Loan to the firm
(d) Share in Profit and Loss
(vi) State two differences between a revaluation account and a realization account.
(vii) What is a ‘fictitious asset’ ? Give one example.
(viii) What is meant by ‘issue of debentures as collateral security’ ?
(ix) Give four examples of tangible fixed assets as per Schedule VI, Part I of the Companies Act. 1956.
(x) What is meant by ‘Cash equivalents’ ?
Answer:
(i) Difference Between Bin Card and Store Ledger.

(ii) It is a unit of product or service for which cost is computed. Cost units are selected to allow for comparision between actual cost and standard cost, or between different actual costs.

(vii) Fictitious assets are those assets which are not tangible in nature. For example-preliminary expenses, debit balance of P& L account.

(x) An asset that is so easily and quickly convertible to cash that holding it is essentially equivalent to holding cash. A Treasury bill is considered a cash equivalent.

Question 2. [10]
Lucy, Rahul and Sanjay are partners sharing profits and losses in the ratio of 1 : 2 : 3, Arun is admitted as a partner who brings in Rs.20,000 as his capital for 1/5th share in the profit. Goodwill of the firm is to be valued at an average of the last three years profits which were Rs. 25,000, Rs. 28,000 and Rs. 37,000 respectively. Arun is unable to bring in cash towards his share of premium for goodwill.
Give the journal entries if goodwill already appears in the books at Rs. 24,000.
Answer:

Question 3. [14]
Anita, Kiran and Mina were partners sharing profits and losses in the ratio , of 3:2: 1. They decided to dissolve the partnership due to insolvency of all the partners. Their Balance Sheet as on 31st December, 2009 was as follows :

The assets were realized as follows :
Machinery — Rs. 5, 000 and
Stock — Rs 3,000
Realization expenses were Rs. 1,000.
Prepare necessary accounts to close the books of the firm.
Answer: 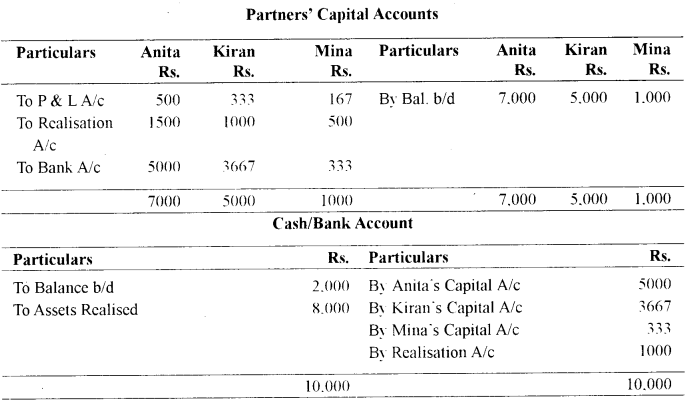 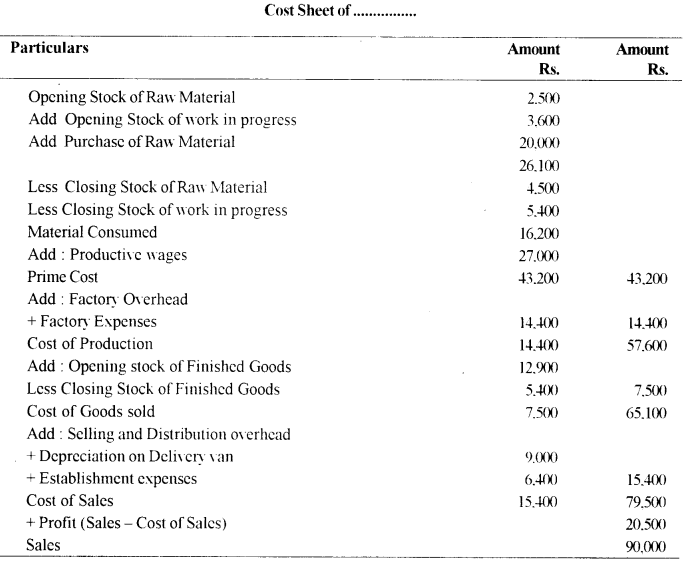 Question 5. [14]
Andrew and Rohan entered into a joint venture and agreed to share profits and losses in the ratio of 4:3. Andrew supplied goods worth Rs. 13,000 from his own stock. He spent Rs. 900 on freight and insurance and drew a bill on Rohan for Rs. 9,000 for three months. Rohan accepted the bill which was discounted by Andrew @ 12%p.a. Rohan paid Rs.600 tow ards clearing charges and Rs.700 for rent. Goods were sold by Rohan for Rs.21,000. Rohan was entitled to a commission of 6%. Rohan sent the draft to Andrew towards settlement of his account
Prepare in the books of Andrew :
(a) Joint Venture Account
(b) Rohan’s Account
Answer:

Question 7. [14]
Raman Ltd, issued 20,000 shares of Rs 10 each at a discount of 10% payable as follows :
(i) Rs 2.50 on application payable on 1st May, 2009
(ii) Rs 1.50 on allotment payable on 1st July, 2009
(iii) Rs 2 on first call payable on 1st Oct, 2009
(iv) Balance on second call payable on 1st Feb.2010
All these shares were subscribed and amounts received.
Shareholder ‘A’ who had been allotted 200 shares, paid the amount of the first and second calls with allotment.
Another shareholder ‘B’ holding 100 shares did not pay the final call till the date of the Balance Sheet. According to the Articles of Association of the company, interest at the rate of 4% p.a. is payable by the company on any calls in advance. The interest was paid by the company to the shareholder on 1st Feb.2010.
Pass the necessary Journal Entries (including interest) in the books of the company.
Answer: 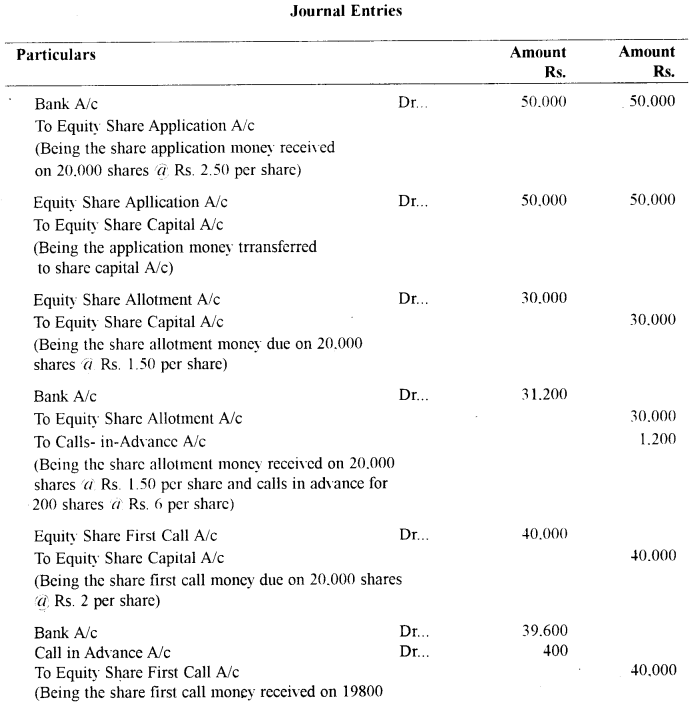 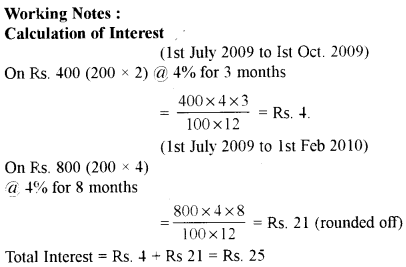 Note : All calculations are to be made to two places of decimal
Answer: 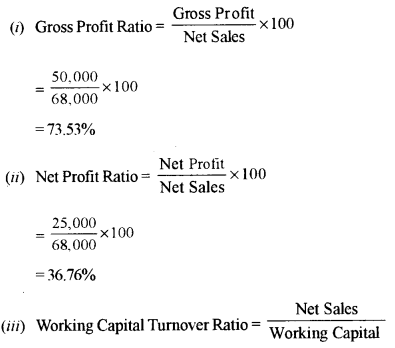 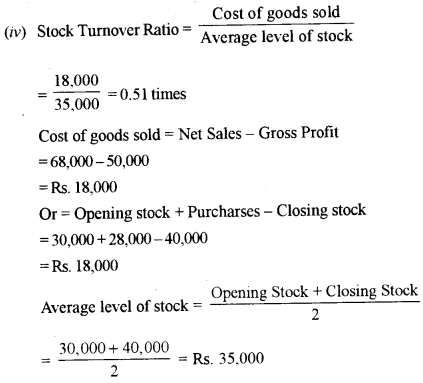 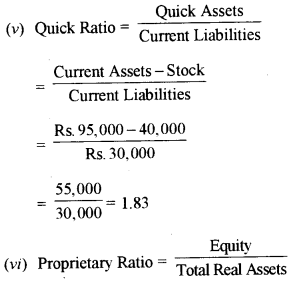 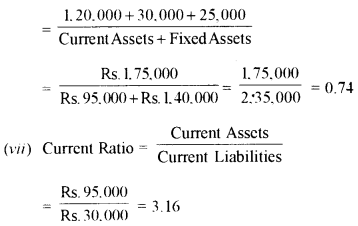 Question 9. [14]
Given below is the Balance Sheet of M/s Victor Limited.

Additional Information :
(a) Loan was paid in the beginning of the year 2007.
(b) Depreciation provided on Plant during the year was Rs. 20,000.
From the above information prepare a cash flow statement as per Accounting Standard – 3.
Answer: 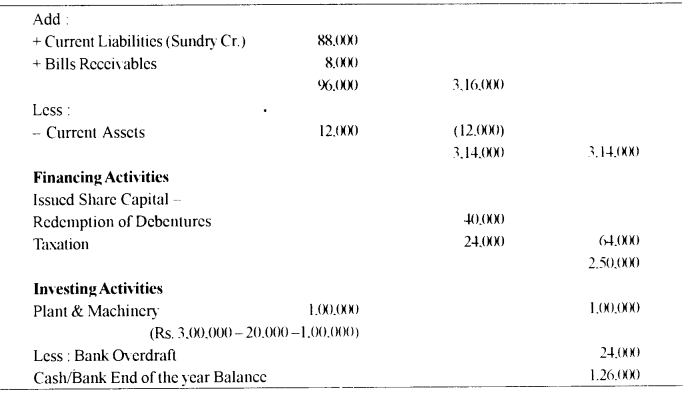 Question 10. [14]
Mehra Brothers has two petrol pumps, one in Kerala and the other in Punjab. The method of valuation of closing stock followed by both the pumps are FIFO and LIFO, respectively A periodic inventory of petrol is taken when the books are closed at the end of each month.
The following information is available for the month of December, 2009.

From the above information, prepare a Trading account to calculate the profit made by the above petrol pumps for the month of December. 2009.
Answer: