Know the list of insects in English from here.

Ants are the eusocial insects of the Formicidae family. They are common insects but have unique capabilities. Ants are indirectly harmful to people.

Bee is an insect with wings that is related to wasps and ants. They are known for their role in pollination. Bees pollinate one in three mouthfuls of what we eat. Honey is bee’s winter food.

Beetles are a group of insects that form Coleoptera order in superorder Endopterygota. It has wings and legs.

Butterflies are familiar with insects to humans. It consists of four parts egg, larva, pupa, and adult. There are approximately 20,000 species of butterflies all over the world. Butterflies will not harm humans that mean they do not bite.

Centipedes are arthropods that belong to the class Chilopoda of subphylum Myriapoda. They are creatures with series of body segments with one pair of legs for each segment of the body. 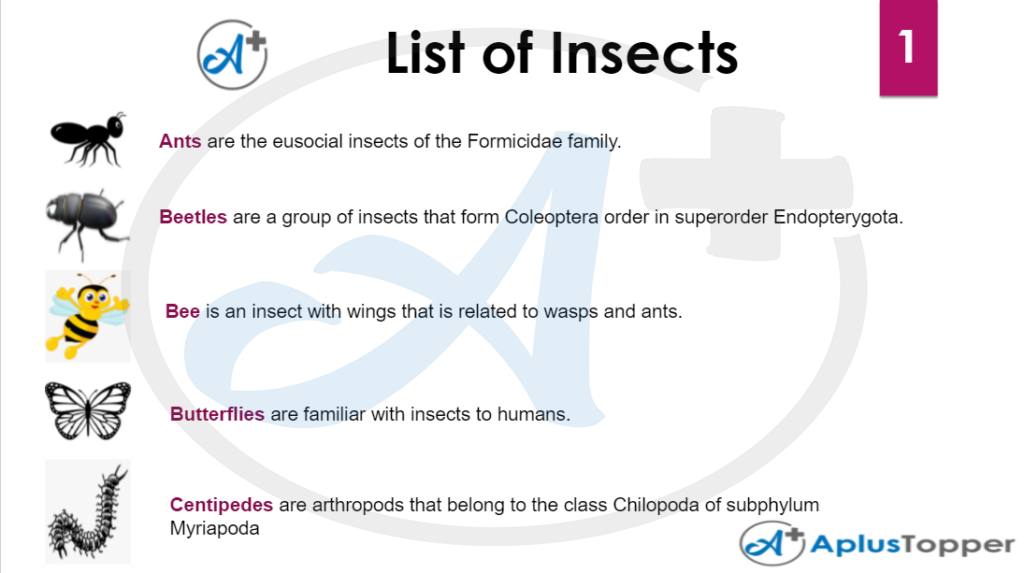 Cicadas are the superfamily of insects in the order of true bugs. Cicadas are winged insects that are mostly known as cyclical lifespans.

Cockroaches are insects that contain cockroaches and termites. Around 30 cockroaches species out of 4600 are associated with human habitats.

A dragonfly is also called a darner. They are found near freshwater habitats almost all over the world

Flea is the common name for any of the small, wingless, and compressed insects belonging to the order Siphonaptera. The cat flea is an extremely common parasitic insect

Fly is known for transmitting diseases. Grasshoppers are the oldest living group of insects. They belong to Caelifera and Orthoptera. Grasshoppers include insects as well as other superfamilies with ground-hoppers and pygmy mole crickets.

Horse-flies or horseflies or Doctor flies are true flies in the family Tabanidae in the insect order Diptera. They prefer to fly in sunlight, avoiding shady areas and dark at night.

Ladybugs are also called ladybird beetle. There are around 5000 widely distributed species of beetles. They are called beetle of our lady.

The louse is the common name for members of Phthiraptera. It contains about 5000 species of wingless insects. They are seen on the scalp on the heads.

Mosquitoes are a group of 3500 species of small flies. They have legs and wings. In Spanish, a mosquito is called a little fly. The life span of a mosquito is 7 days.

A moth is an order of insects that includes butterflies and moths. The lifespan of a Moth insect is 12 months.

Mantis is an insect that contains around 2400 species in 460 genera in 33 families. The English name of praying mantis is Mantodea.

Spiders are also known as Araneae. It is an insect with eight legs. It ranks seventh in total species diversity among all orders of organisms.

Stick bugs are also known as stick insects. They are approximately 3000 species of slow-moving insects that are green or brown in color.

Termites are a suborder of social insects, the Isoptera. They are called white ants because they belong to the order Hymenoptera.

Wasp, any member of a group of insects in the order Hymenoptera. There are around 75,000 species. Vespidae is the largest genus within the family of wasp.

Worms are many different distantly related animals that typically have a long cylindrical tube-like body, no limbs, and no eyes. Free-living worm species do not live on land, but instead, live in marine or freshwater environments, or underground by burrowing. 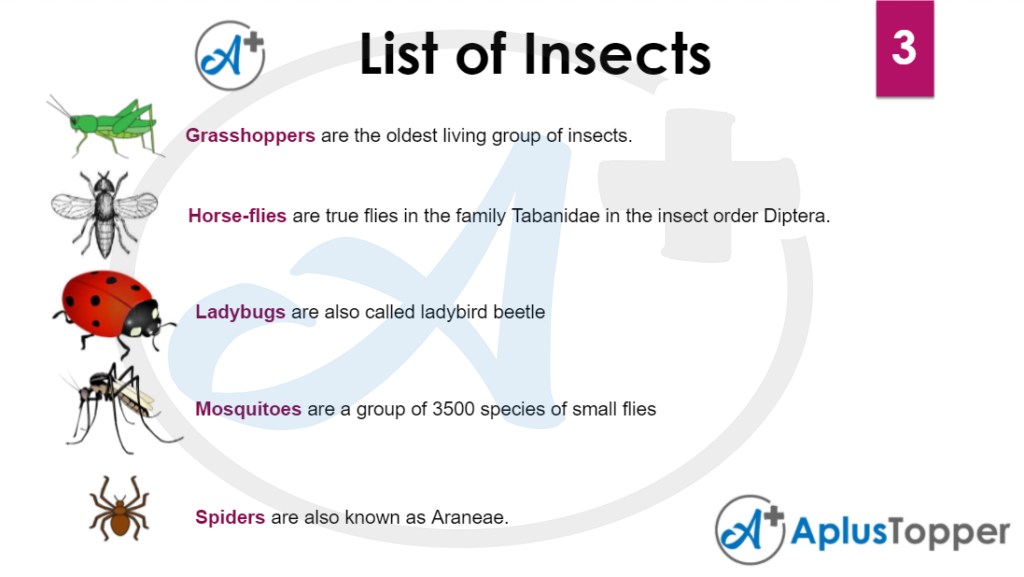