The legacy of ISRO began from the year 1975 when they launched the satellite Aryabhata that is named after the famous Indian astronomer and inventor of zero. ISRO is one of the six government space organizations in the world that possess full launch capabilities, operate large fleets of artificial satellites, deploy cryogenic engines, and launch extraterrestrial missions.

We are providing students with a long essay of 500 words and a short essay of 150 words on the topic Indian Space Program for reference.

The dawn of the Indian Space Program began in 1962 with the establishment of INCOSPAR (Indian National Committee for Space Research). In 1972, the space program was formalized with the constitution of DOS (Department of Space) and the Space Commission. This was done to formulate and implement the policies related to space research and space technology in the country.

The nodal agency for coordinating Research and Development activities related to space science and technology is the Space Commission. And DOS is the executive wing of this Space Commission that operates through major national organizations like ISRO, NRSA, PRL, NMRF, NE-SAC, etc. DOS also helps educational institutions by sponsoring projects related to space research.

In 1969, the government of India, for the purpose of rapid development in the department of space technology and its application, established ISRO. The Indian Space Research Organization (ISRO) was set up by Dr.Vikram Sarabhai at Ahmadabad as him in the chairman position, and the organization was headquartered in Bengaluru (then called Bangalore).

Dr.Vikram Sarabhai, as the chairman of the apex body, helped in forming guidelines, formulated policies, and monitored the implementation of all national space policies. ISRO has an objective directed towards the self-reliant use of space technology and data for the development of India.

ISRO has helped the nation in the fields of mass communication and education after successful satellite launches. ISRO also aims at monitoring the survey and management of national natural resources by using remote sensing technology, meteorological forecasting, and environmental monitoring. The Indian Space Programs included the development and launches of several indigenous satellites, launch vehicles, space orbiters, and rockets.

Other than ISRO, some Indian space research organizations are the following:

Space Applications Centre: SAC is the organization located in Ahmedabad that engages in the development of payloads for satellite communication, remote sensing, and meteorology.
Vikram Sarabhai Space Centre: VSSC is the head organization for the development and launch of various satellite and satellite vehicles and similarly related space technology. VSSC is located at Thiruvananthapuram of India.
Liquid Propulsion System Centre: The lead organization in India for developing liquid and cryogenic propulsion for satellites and launch vehicles is the LPSC.

Some of the major achievements of Indian Space Programs are the successful launch and operation of several satellites and satellite vehicles, like the AstroSat, Mangalyaan, Chandrayaan 1 & 2, PSLV, GSLV, etc. It is good to see that the government has invested a lot in Indian Space Programs in the past two decades. The Indian Space Program has come a long way, and there are miles to go before it can establish India as the best in space science and technology in the whole world. 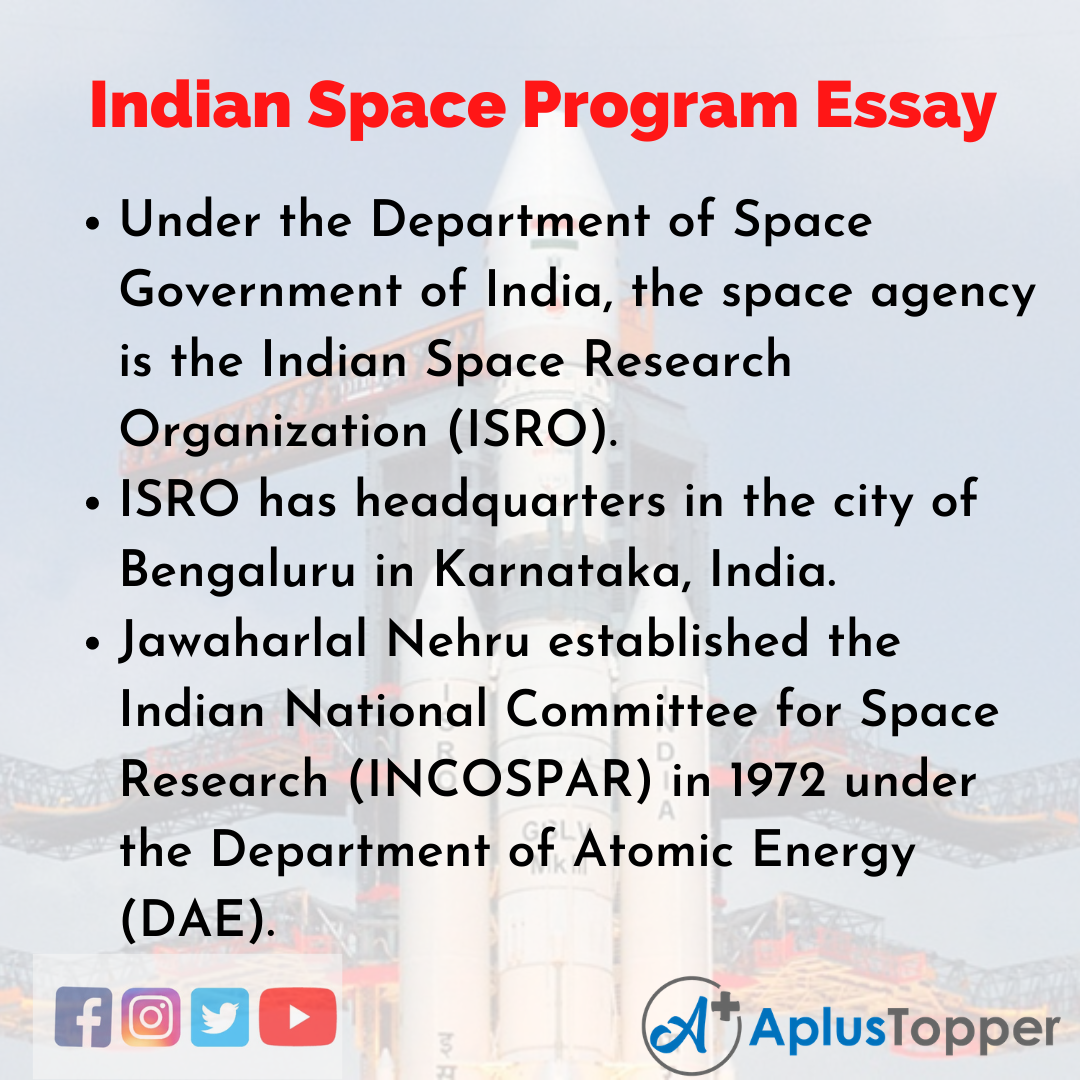 It can be said that the Indian Space program started its legacy with the launch of its first space satellite named Aryabhatta on 19th April 1975. Soon after the first satellite launch, India didn’t delay launching its second satellite named Bhaskara on 7th June of 1979. India has also left a landmark in the history of space science and technology by launching Chandrayaan for its moon mission.

All this progress in the field of space research began with the great visionary scientist Dr.Vikram Sarabhai. And this is why Dr.Sarabhai is called the Father of the Indian Space Program. Indian Space Programs aim to promote the development of space science applications and technology for the benefit of the country’s socio-economical conditions. 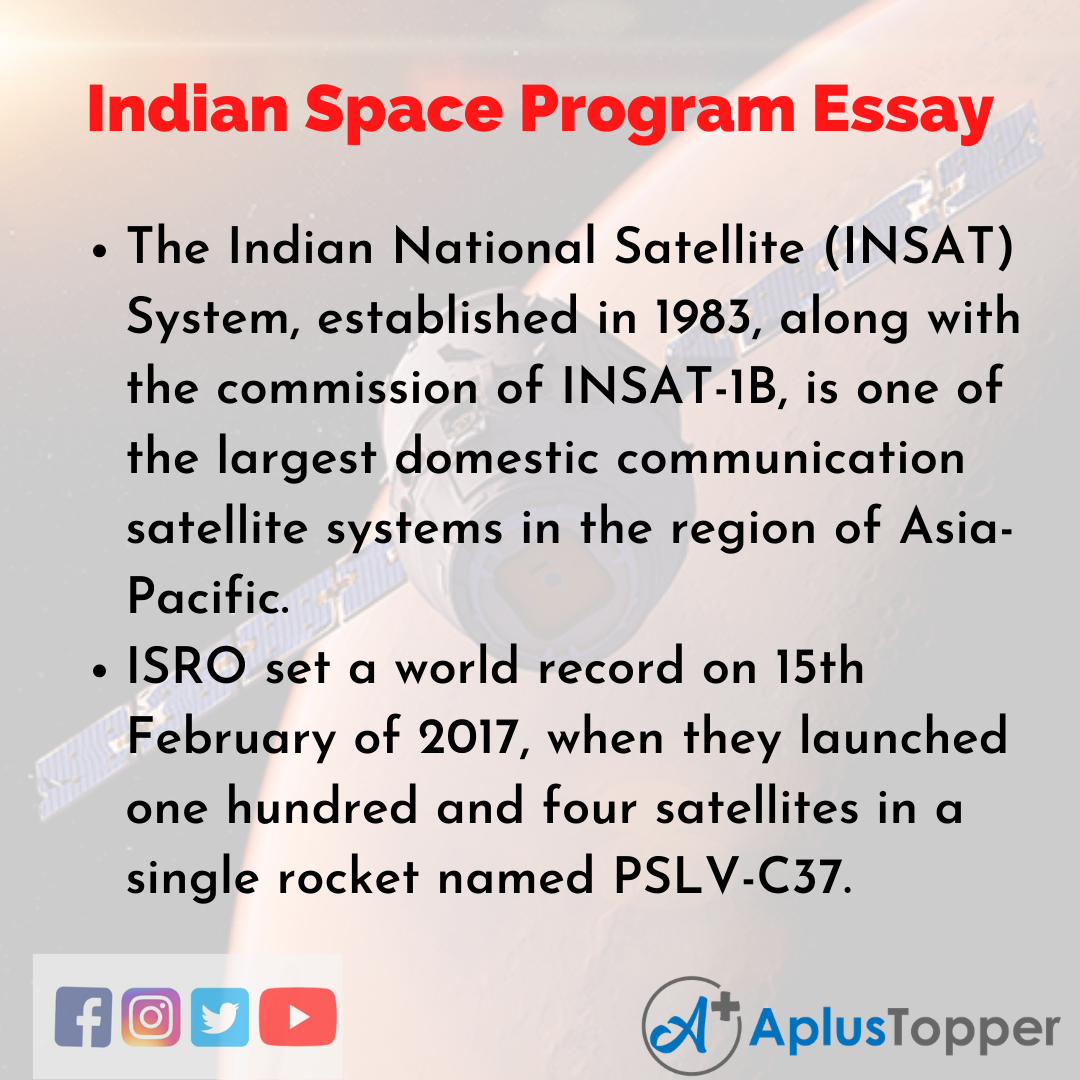 Question 1.
Does ISRO have a marketing arm?

Answer:
The marketing arm of ISRO is the Antrix Corporation Limited (ACL) that is responsible for the promotion, transfer of technology, and commercial exploitation of space products and services.

Question 2.
What are the three distinct elements of the Indian Space Program?

Answer:
The Indian Space Program had three distinct elements since its inception, such as the space transportation system, satellites for communication and remote sensing, and application programs.

Question 3.
How do the data from the satellites launched by the ISRO helpful for the country?

Question 4.
What is some recent news regarding upcoming ISRO missions?

Answer:
The Indian government in 2018 had announced an allocation of 100 billion rupees for the first human-crewed space mission set to be launched by the year 2022. However, a test launch was scheduled to take place in December of 2020, which now may be delayed because of the global pandemic.