Everyone in this world has a dream. One always makes plans about the future. I too dream of an India that is perfect. It would be an India in which there would be no racism, communalism, and regionalism. First of all, I would root out communalism, whatever its shape or form may be. All such tendencies which fan the forces of separatism and disruption would be eliminated. An Essay of India of My Dreams is given below.

“You have to Drema before your dreams can come true”.

I want India to be scientifically advanced, technologically better and agriculturally advanced. I would like to build an India where logic and scientific ideas would prevail over blind faith and fanaticism. Crude emotionalism and coarse sentimentalism would never rule. I would like to bring India to the apex of scientific and technological progress because the modern age is the age of science and information technology. Every country which wants to prosper and progress must give due importance to science and information technology, otherwise, it cannot achieve a good standard of living for its citizens.

The India of my dreams would be an India that is self-sufficient in food. All the barren lands would be cultivated for achieving self-sufficiency in food-grains. Agriculture would be given special attention because agriculture is the backbone of the Indian economy. Another green revolution would be brought about by launching intensive agricultural programmes and farmers would be asked to use better seeds and fertilisers as well as modern tools and implements.

Next, I would like the country to be highly industrialised. This is the age of industrialisation and in this age, the country should be taken to the zenith of progress and prosperity.

I would also strengthen India’s defence. The country would be so strong that no enemy would ever dare cast his covetous eyes on the sacred soil of India. Defence and security of the country would be of paramount importance. For achieving this objective, the country would be equipped with all the paraphernalia of modern defence because people worship military power in the present world. We have proved during the Kargil war that we are second to none but we would have to work harder for military supremacy.

Elimination of ignorance and illiteracy would be my next priorities because these are banes for any society. People would be educated on a mass-scale. Then, the system of democracy could be more pragmatic. Individual liberty and freedom would be defined and granted in the letter as well as spirit.

Another thing, which I would like to see in the India of my dreams, would be the abridgment of the gap between the rich and the poor. National income would be distributed rationally among all sections of society. Provision of food, housing, and clothing to one and all would be given top priority in the India of my dreams. For achieving and accomplishing this, socialism would be the only remedy which, if practiced sincerely, would usher India into an era of economic equality.

If these measures are taken with utmost sincerity, India would soon be counted among the most powerful countries of the world and would also guide those countries that are still slaves of big powers. It would be an India that Rabindranath Tagore described in his lines:

“Where the mind is without fear and the head is held high, where knowledge is free where the world has not been broken up into fragments, by narrow domestic walls.” 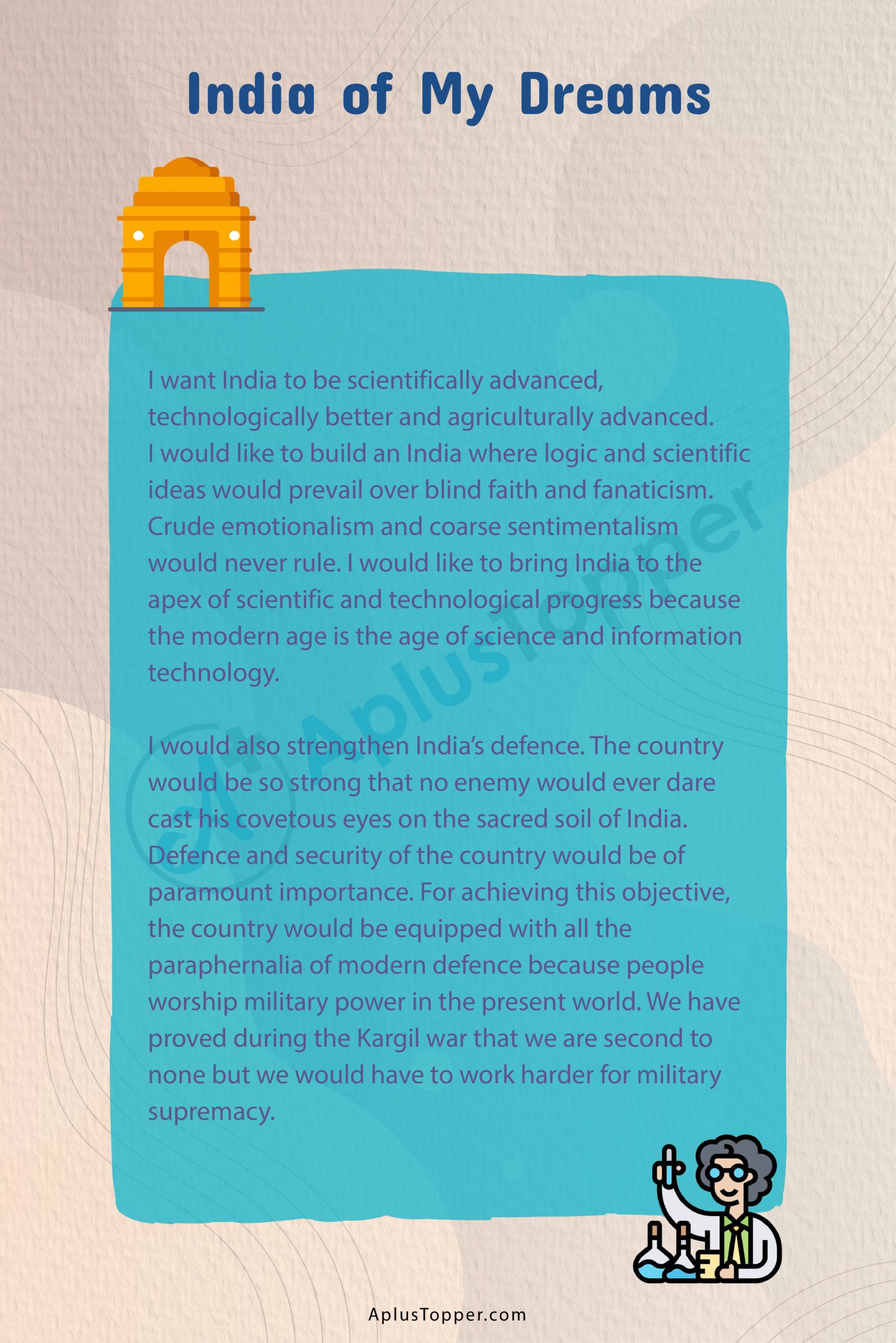 Short Essay On India Of My Dreams 250 Words

India enjoys a rich cultural heritage. People belonging to various castes, creeds, and religions live peacefully in this country. However, there are certain groups of people that try to incite people to serve their vested interests thereby hampering peace in the country. I dream of an India that is devoid of such divisive tendencies. It should be a place where different ethnic groups live in perfect harmony with each other.

I also dream of India as being a nation where every citizen is educated. I want the people of my country to understand the importance of education and ensure that their children seek education rather than indulging in menial jobs at a tender age. Adults who have missed a chance to study during their childhood must also join adult education classes to seek education in order to find a better job for themselves.

I want the government to provide equal employment opportunities for all so that the youth get deserving jobs and contribute towards the growth of the nation. I want the country to become technologically advanced and see growth in all the sectors. Lastly, I want India to be a country where women are treated with respect and are given equal opportunities as men.

Short Essay On India Of My Dreams In 300 Words

India is a multi-cultural, multi-lingual and multi-religious society that has seen steady progress in various spheres over the last century. I dream of India that progresses at an even greater pace and joins the list of the developed countries in no time. Here are the key areas that need attention in order to make it a better place: