Income Inequality Essay: Income inequality is a word used to describe an income of a defined geographic area disparity distribution of wealth, “The poor become poorer, the rich become richer.”

We provide children and students with essay samples on a long essay of 500 words and a short essay of 150 words on the topic “Income Inequality” for reference.

Throughout the years, many economists in India of great reputation have said that despite the so-called Hindu rate of growth of 2% increased to 7% after 1991. But when it comes to income inequality, India is not so innocent. After conducting various surveys last year, it has been established that India’s top 1% population controls up to 58% of the country’s total economic condition, which is reckoned to be higher than the global figure of around 50%.

A common characteristic between low and high income is that the high-income family has two workers. Compared to the household with only one income earners, this doesn’t mean all households with a single income are poor. We also see Upper, and lower-class people tend to marry the same class people. Thus in low and high-income families, they have two low and high-wage earners, respectively. Even more, single parents face financial trouble, especially when there are only women as the family’s economic pillar.

Thus, the low pay labour forces appear as the supply is more than demand— for example, cheap labour units from low pay, high growth rate country, China, and Bangladesh. To stabilize this extremity, first, introduce a minimum wage policy. The government should imply a minimum wage to protect the employee while increasing the tax rate to decrease rich people’s income.

However, this policy will have a disadvantage, as higher-wage companies will have less motivation to hire workers while more labourers will be attracted to the workforce. Thus, disequilibrium will occur where labour demand and supply are unequal, and the unemployment rate will rise. After the minimum wage policy, education will be an important way to combat income inequality. The best solution for both causes is giving easy access to education. However, policymakers shouldn’t overstate the potential of education as this will give people equal chances to compete as they will have the same education level. Also, education and technology is a cause of income inequality. College graduated and professionally skilled people receive a higher income than an uneducated or less-educated worker. Income inequality is unfair. Income inequality will slow down the country’s economic growth, and more poverty as the citizen has low standard and performance.

Income inequality causes political instability, and the country’s economic development slows down. The minimum wage policy will be able to control income equality and reduce poverty. Access to better education is another solution, where all people can have a better education to have equal skill levels and get standard wages.

10 Lines on Income Inequality in English 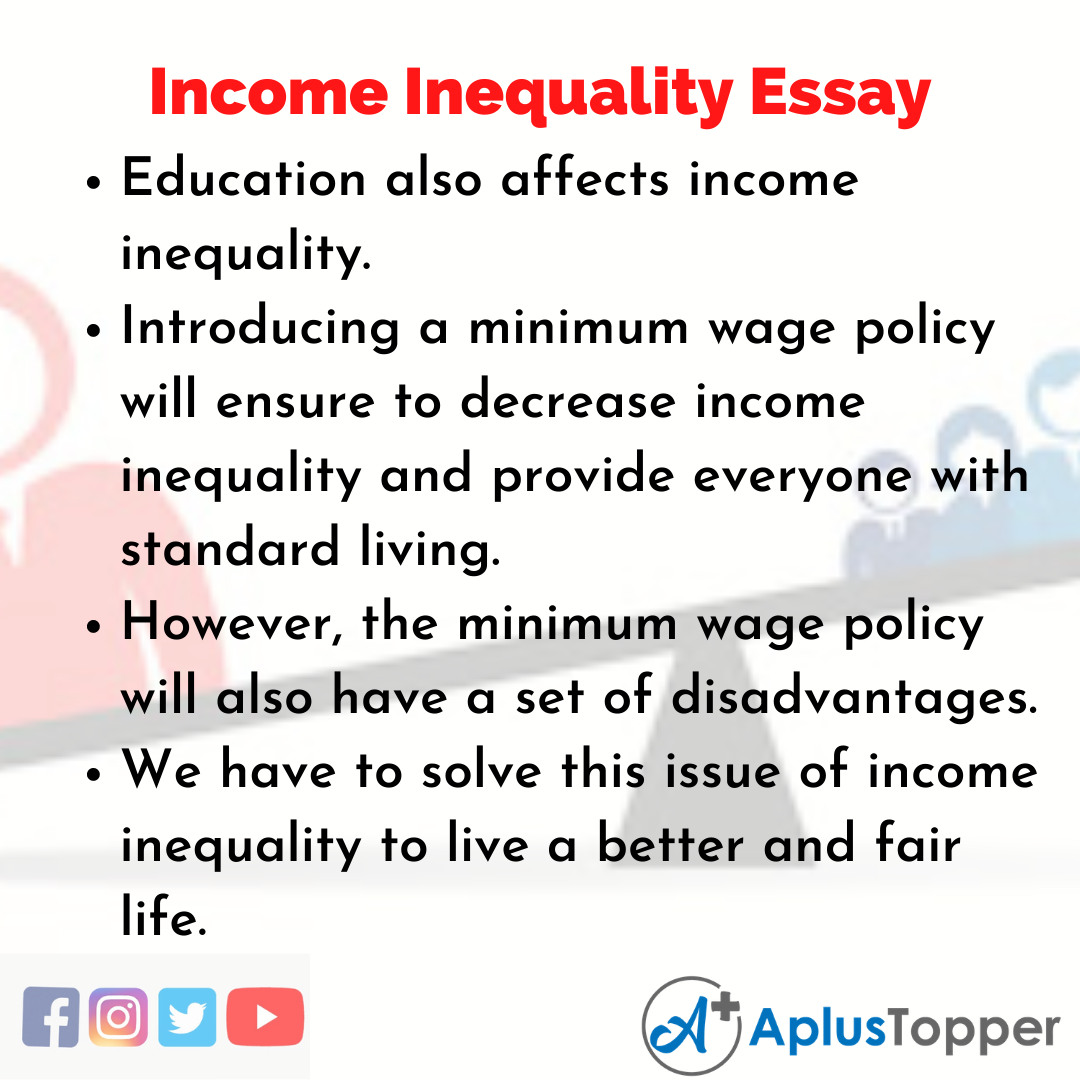 Question 2.
Which country has the lowest income inequality?

Answer:
According to the GINI index (World Bank estimate), the country ranking number one in the lowest income inequality in South Africa with a rate of 63.00%.

Question 3.
How is income inequality reduced?

Answer:
Income inequality can be reduced directly by decreasing the income of the richest or increasing the poorest incomes.