Importance of Voting Essay: A concept is well known by all democratic nations since most of the things are decided with elections. Different governors, mayors, judges, and presidents are all selected by the general population through the voting system, or else they are decided upon by the elected officials.

I personally believe that everyone should vote as everyone has a different opinion and in our Indian democracy we have the ability to choose who can preside over in the office, this also gives us an opportunity to have a say in this political world. The entire purpose of a democracy is to be able to have a say in the political scenario and this is to make sure everyone’s voice is heard and this is what makes up a democracy with everyone participating in it.

From a lot of the statistics, it is a known fact that young people don’t vote especially from the age ranging from 18 to 24. We can have different beliefs but this doesn’t mean you remove yourself from the electoral process. On hearing these statistics I was completely shocked because naturally, people tend to assume that everyone votes but that is not the case.

Voting can be defined as a way of expressing one’s own preference or opinion. This is important as everyone can get a say in the crazy political world we live in and that is what makes up a democracy. 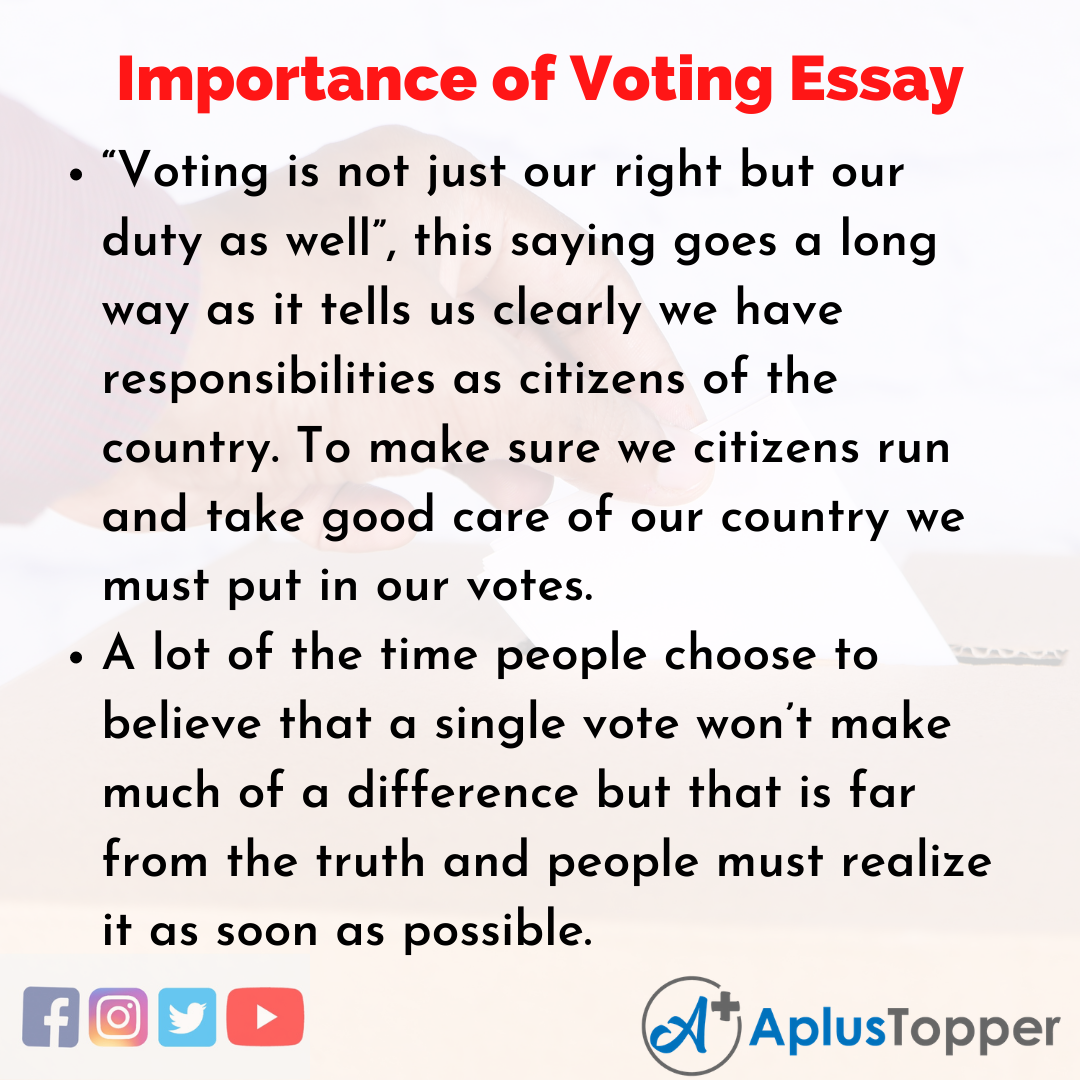 Short Essay on Importance of Voting 150 Words in English

Citizens of the country constantly complain about how our political climate is bad and worsening day by day and the honest truth is we have a chance to change it for the better. To make these changes we must vote by taking an informed vote and casting it as you should remember every vote counts.

It is mostly the youth of the country from age of 18 to 24 that tend to not vote and this causes a huge backlash in the system as these are the votes that we need. If you don’t like the way your country is running then change that by voting and don’t just complain.

“Voting is not just our right but our duty as well”, this saying goes a long way as it tells us clearly we have responsibilities as citizens of the country. To make sure we citizens run and take good care of our country we must put in our votes. A lot of the time people choose to believe that a single vote won’t make much of a difference but that is far from the truth and people must realize it as soon as possible.

Your choice of voting can have extreme consequences on the people from around the world who mostly do not have the right to vote. We must realize that a lot of the lawmakers are responsible for the various policies, laws, and infrastructure of the country for the future years and we are responsible for how these policies, law, and infrastructure is to turn out by voting.

A lot of people in other countries like Afghanistan cannot vote and some even die fighting for this very right. Most war-stricken countries have had their first elections in recent years even though most of the time they are threatened by the Taliban and certain terrorists. Superpower nation like America set certain policies which can have far-reaching impacts on countries that don’t have the same freedom as freedom of expression or the right to votes.

Citizens of the country constantly complain about how our political climate is bad and worsening day by day and the honest truth is we have a chance to change it for the better. To make these changes we must vote by taking an informed vote and casting it as you should remember every vote counts. It is the youth of the nation that does not vote and we have to change that as quickly as possible. Long Essay on Importance of Voting 500 Words in English

The process by which people can express their political opinion is known as voting. Citizens of the country express their political opinion by choosing the desired political leader. This political leader, if he is a lawmaker, will have a huge impact on the way the country will presently run and also in the future, so to make sure we choose the right leader in a time when the political climate is constantly changing and we should be responsible citizens and cast our vote.

It is important to understand that election acts as a pillar for democracy because when all else fails we can still choose the right person to run the country. By not choosing the right leader a lot of people can be affected in the sense it can have far-reaching consequences on people who have nothing to do with our country. So we must understand that voting for the right person can have an impact all around us and can affect our country for a very long time. An election makes sure that the government is of the people, for the people, and by the people.

In an election, it is important to have suffrage which is the right to vote in elections. In India, the age of voting is attainable only at the age of 18, and in most countries where people have the right to vote have almost the same age limit. The electorate usually never includes the entire population. This question of how to have the privilege of voting is quite important. A very notable characteristic of elections is the nomination of a person. The nomination is the process of officially suggesting somebody for the public office and after the testimonials and endorsements are the various public statements that can help support a candidate’s nomination.

In the process of voting the first step is the tally of votes. This is the use of the different ballot and counting systems. After this step, the result is determined based on the tally. Usually, the categorization of these systems can be majoritarian or proportional. Once the tally is over the person with the most tally wins the election. Elected officials are responsible to the people of the country so during different periods they must return to their voters, this is done so the elected officials can seek mandate so they can continue in office. Elections are conducted during fixed intervals of time. Elections can have far-reaching impacts on different parts of the world.

Over the recent past, it has become quite common to talk bad about the current elected leader of any legislative assembly or parliament. At the end of the day, the fault-finding comes down to what’s wrong with the system and how democracy isn’t functioning how it should. However, when speculating all the problems it never really bottles down to what the people can do to strengthen the system and bring change to it. Just as it is the responsibility of the elected leader to provide for the people of the country, we need the people to do our job and correct the leader by making sure he represents the right things and this can be done so by selecting the right candidate.

The right to vote is one of the few pillars of democracy. Therefore it is important that one must vote if he is able to and contribute to the country. A citizen shouldn’t find a reason as to not vote as it must be a compulsive duty and must come from within. Citizens of the country constantly complain about how our political climate is bad and worsening day by day and the honest truth is we have a chance to change it for the better.

To make these changes we must vote by taking an informed vote and casting it as you should remember every vote counts. I personally believe that everyone should vote as everyone has a different opinion and in our Indian democracy we have the ability to choose who can preside over in the office, this also gives us an opportunity to have a say in this political world.