Importance of Independence Day in India Essay: India celebrates 15th August every year as its Independence day. It is the day the country got freedom from its’ oppressors, the British government. Independence Day holds a special place in the hearts of all Indians.

We provide children and students with essay samples on a long essay of 500 words and a short essay of 150 words on the topic “Importance of Independence Day in India Essay” for reference.

Short Essay on Importance of Independence Day in India

Short Essay on Importance of Independence Day in India is helpful to students of classes 1, 2, 3, 4, 5 and 6.

The citizens of India celebrate 15th August as their Independence day every year. People from all over the country hold celebrations in their schools, offices, colleges and residential areas. It is one of the most critical days in the lives of all Indians.

India was under the British for almost two hundred years. They looted our country and harmed the citizens of the country. The Britisher’s plumber the country of its wealth. However, the nation’s citizens decided it was enough and started to raise their voices against British rule.

People from all over the country started to raise their voices against British rule. These people gave their lives to fight the government. There were revolutionaries like Mahatma Gandhi, who took non-violence and held various rallies across the country.

All the people who took part in fighting for freedom paid off on 15th August 1947 when India got freedom. Since 1947, India has been celebrating this day as Independence Day.

Schools, colleges, offices and residential areas of the country celebrate Independence day. It is a day celebrated in the memory of those who sacrificed their lives for their country. Due to the selfless sacrifice of the people, we are living in a free country.

Independence Day Celebration and its importance

We celebrate Independence day every year, and we come to love our country more every year. 15th August is an essential day in the lives of all Indians. We should celebrate this day with love and pride for our nation. 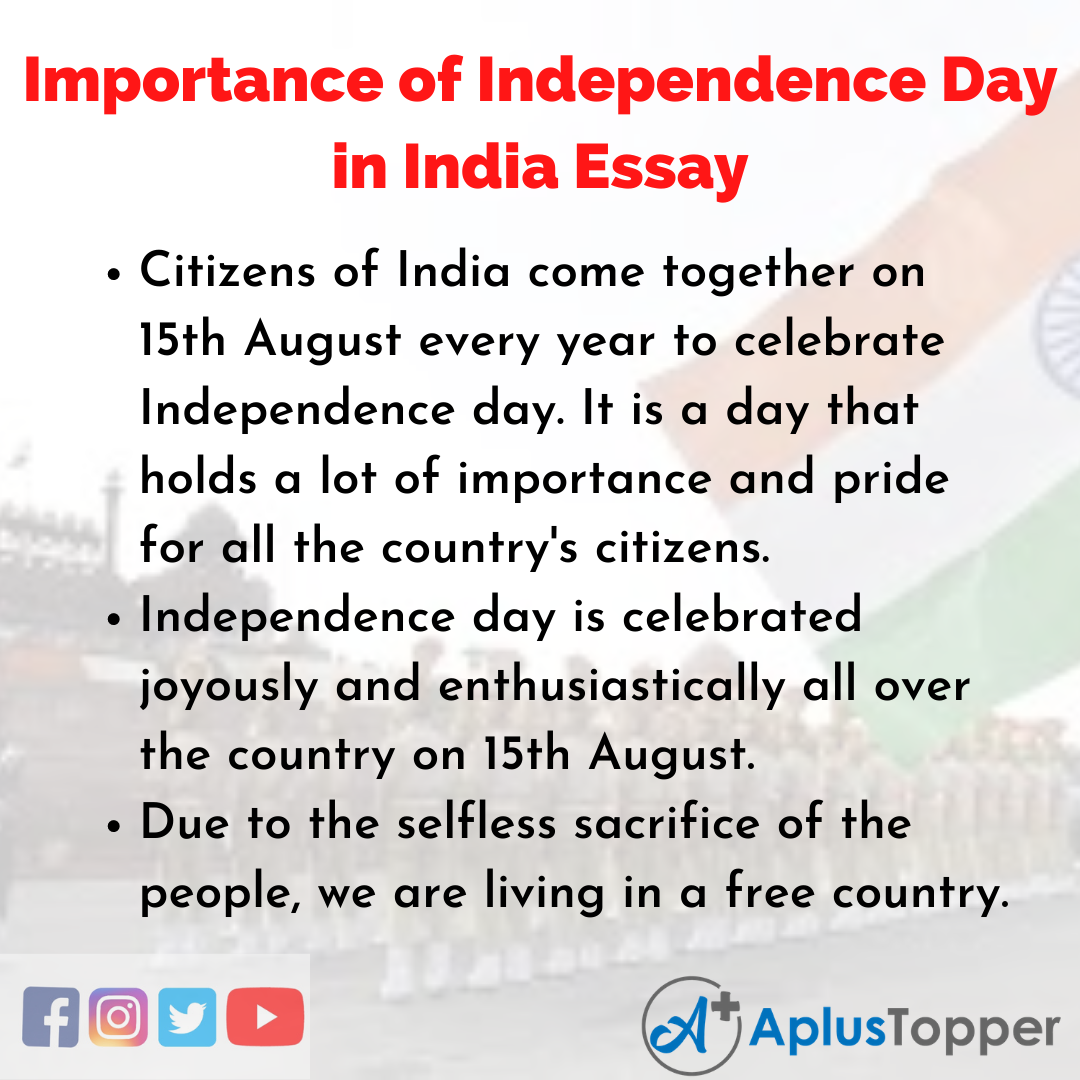 Long Essay on Importance of Independence Day in India is usually given to classes 7, 8, 9, and 10.

Each citizen of India celebrates India with great zeal and courage because it’s one of the most important days of the year. Independence Day holds a unique and vital place in the hearts of all Indians.

How do Schools and Colleges Celebrate Independence day?

One of the first things that happen in the Independence day celebration is flag hoisting. Schools and colleges hold various events like debates, dances, singing and quiz competitions throughout the day. Students actively take part in all the events as they are a part of the celebration.

The junior school students dress up as various freedom fighters as a part of the fancy dress competition. Students prepare a few lines about the freedom fighter they are portraying. At the end of all the rounds, there is a prize distribution held. Various students win prizes for the competitions they took part in through the Independence day celebration.

Flag hoisting is an important and essential part of the Independence day celebrations. Offices hold special lunches for their employees to improve and strengthen the bond between the employees. Some people make speeches to show what the country means, and what its Independence means to them. Some offices hold various cultural events.

When the national anthem is played, people stand in the attention position, which is done after the flag hoisting. There are patriotic songs played on the maximum volume, and people are seen immersed in the feeling of love and patriotism for their country.

One of the events that happen during the Independence day celebration in residential areas is a fancy dress competition. It is an event that brings everyone in the community together. People come dressed as different freedom fighters and recite a few things about them. Children dress up like Jawaharlal Nehru, Mahatma Gandhi, Bhagat Singh and other freedom fighters.

After a morning of Independence day celebrations, there is a brunch organised by the associations. Residents sit and enjoy sharing stories and eating food together. Independence day brings neighbours together.

The Practice of Flying Kites 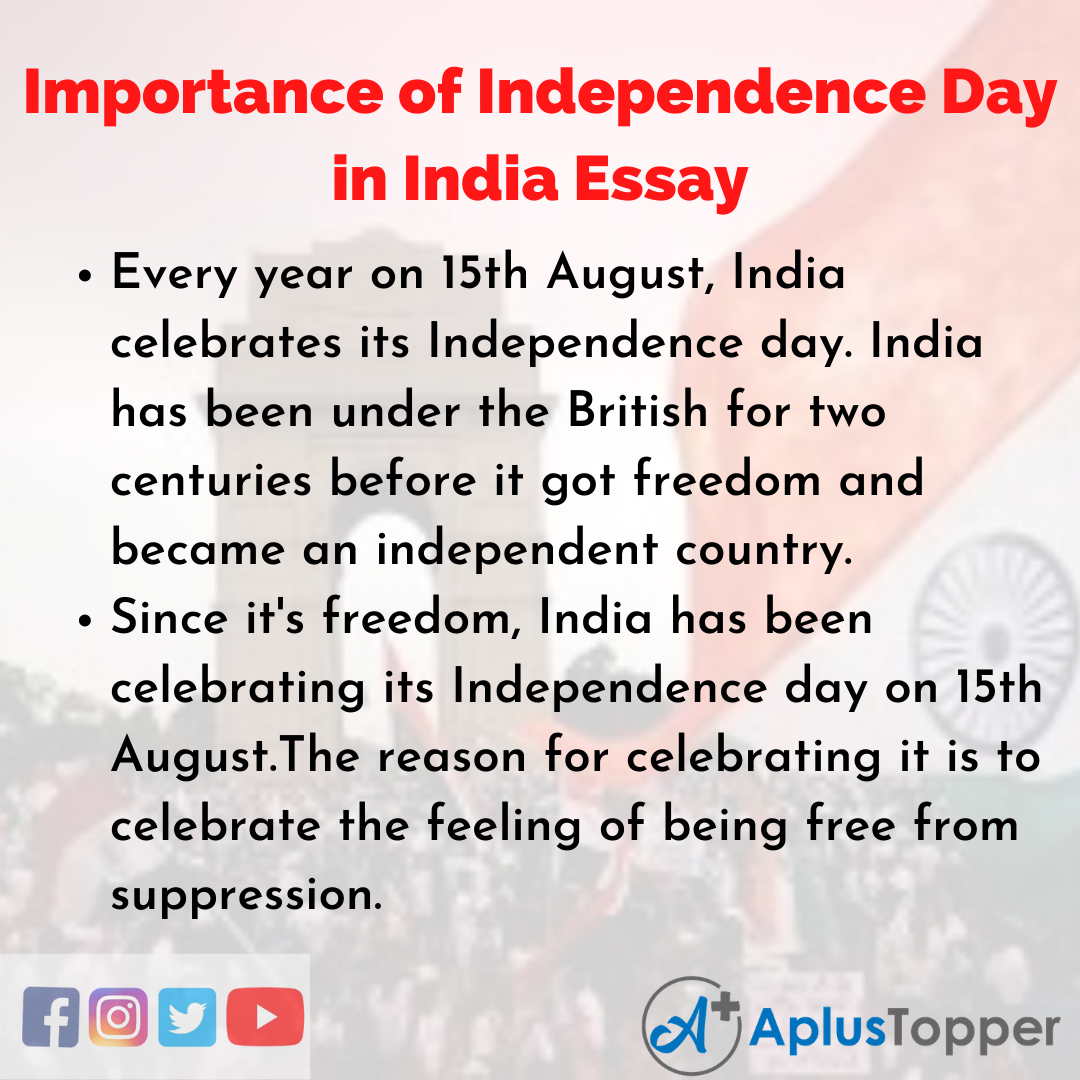