Impact of Globalization Essay: Since the decline of communalism, Globalization has become one of the most controversial and debating issues among people around the World. Globalization has a different definition to different people, and whether it has a positive impact today or was better for yesterday is still questionable. Although a part of the population questions its existence, it has significantly impacted both developed and developing countries’ economies. Globalization cannot simply be related to being political as it has had significant effects on cultural, ideological, and social aspects of people around the World.

To understand the impact of Globalization, it is important to know what it is. One of the popular political scientist, James Rosenau, described the term as a currently popular label and accounted for people’s norms, goods, ideas, services, activities, and currencies that are localized and practiced in a confined area. As per World Health Organization, Globalization is defined as the interdependence and interconnection of people in a local place with the people around the World. The two main elements that need to work here is the ease of flow of goods, services, and activities of people from one place to another and the incorporation and change in policies that allow the easy flow of exchange around the areas.

Globalization is a complex procedure that includes the trends and tendencies of the economic, cultural, and social spheres of the people and places around the World. The process is huge and not easily predictable but organized as well. The liberation of investment and trade, Social networks worldwide, technological innovation, and entrepreneurship are the four major factors of Globalization.

Many political scientists believe that the two major forces that make Globalization effective are technological innovation and entrepreneurship. However, it is impossible to prove that the process works without the intervention of other factors. With the adoption and evolution of market-related laws and policies in local and international fields, the governments have played a significant role by allowing economic integration of special activities and giving major independence to welcome the outside World. Globalization’s financial aspect is the major force that acts as a driving agent for both the political and social parts. Due to the colonization by Europe in various countries, some of the practices and cultural lifestyle is adopted by the people deep inside the African villages. 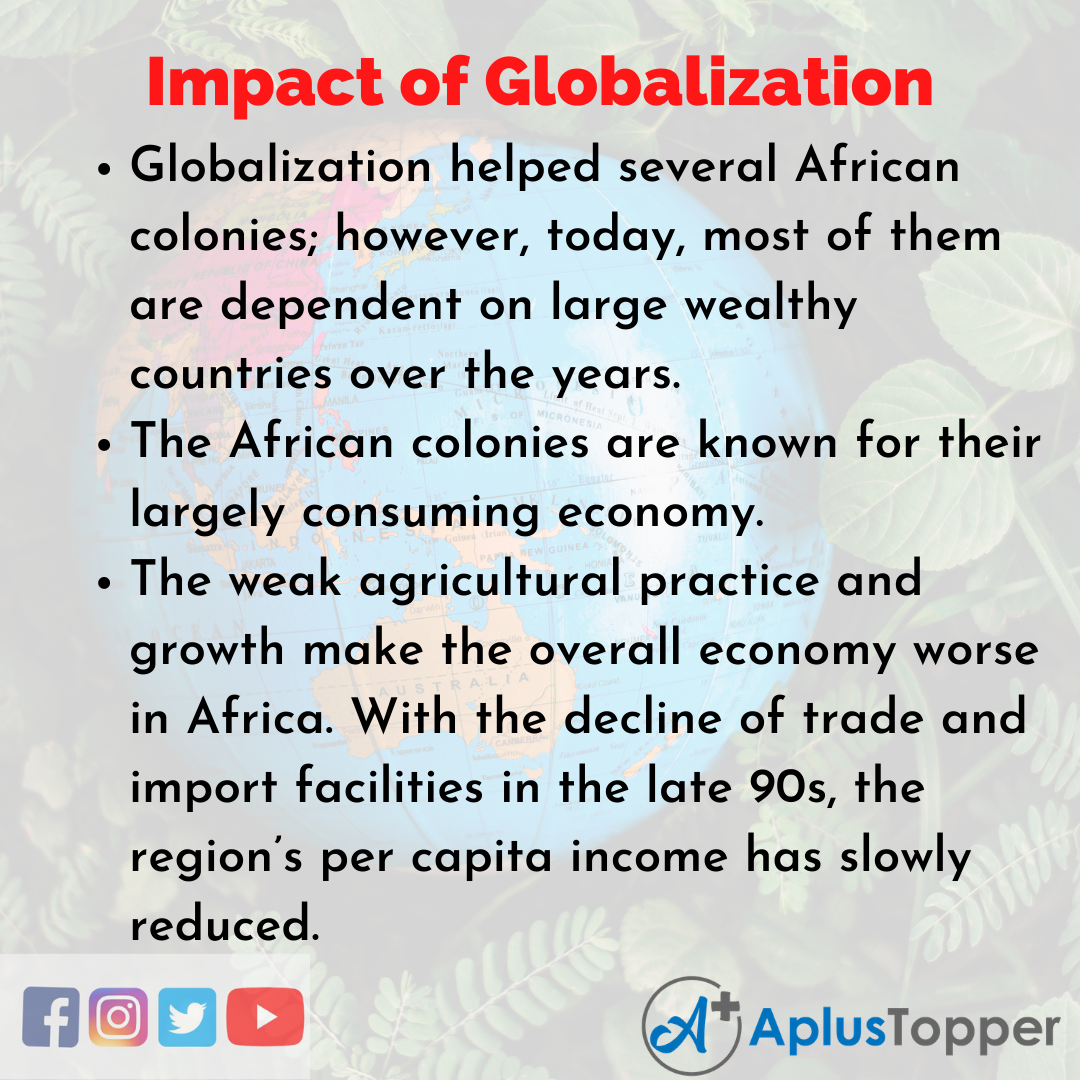 Globalization Plays a Role in the Worldwide Development

Globalization has made way for the countries to develop rapidly. However, the development is not even because some countries are growing quickly in comparison to others. The interconnection between the countries helped decrease poverty, but it does not equally support global community members. The developing countries lie in a depriving position while the developed countries enjoy all the interconnection benefits. However, when we take a close look at the impact of Globalization worldwide, we can conclude that it has both positive and negative effects on both developed and developing countries.

Today, the developing countries can openly communicate and trade through transport, labor, technology, management, and other benefits from other industrialized countries.

The impact of Globalization around the World

Globalization has its backdrops that dually affect both the developed and developing countries. However, considering the positive side to be heavier, people still believe it to be beneficial and aim for a better standard of living for all the poor people around the Globe.

According to political scientists, the impact of Globalization and trade on developing countries and industrialized countries is obvious that has a positive impact on the economic development of the nations. However, economic progress is not possible if the member countries and governments do not allow free trade flow without any limitations. The liberalization of trade will help the free flow of goods and services with an increasing profit to the producer country and the export countries. In the past decade, Uganda has proven to improve its economic situation by allowing free trade flow and restricting laws.

Trade is emerging as a trend in various underdeveloped and developing countries. With the reducing restrictions of trade, labor requirement and demand of manufacturers has risen. Many such industrialists migrate their business and production to developing countries, increasing employment and wealth among poor people. The hosting countries get several benefits from such a situation. Firstly, increase in employment opportunities as a lot of labor and workforce is required in industries. Import of new technology automatically activates with the welcome of new foreign sectors. Therefore, training local employees gives another opportunity for employment for the hosting countries. Often these foreign industries distribute their work and machine factories in various other countries and states. In such cases, the widespread chance of employment paves the way for Globalization.

With the increase in creativity and innovation, local and Global competition is an automatic result of Globalization. The competition among the producers ensures the quality of the product and the efficiency of producing goods. One of the major positive effects of Globalization is access to foreign interests, culture, and entertainment via music, movies, apparel, and television broadcasts. The cooperation among the government officials and the focus on similar goals has helped distribute knowledge among different underprivileged countries. With Globalization, the news and another kind of interactions can be done faster than expected.

However, with numerous positive effects of Globalization, there are several negative impacts as well, which the critics put together to criticize the concept in developing countries. According to reports of 2004, Globalization’s negative impact has no greater examples than countries like China and India.

Globalization helped several African colonies; however, today, most of them are dependent on large wealthy countries over the years. The African colonies are known for their largely consuming economy. The weak agricultural practice and growth make the overall economy worse in Africa. With the decline of trade and import facilities in the late 90s, the region’s per capita income has slowly reduced. The survey of social and economic conditions of Africa has an external debt of a million dollars.

Impact of Globalization on Health and Diseases

Globalization has made a serious impact on the hygiene of infectious and deadly diseases. It has given the developing countries the opportunity to restraint, prevent and eradicate the infection quickly. The reason why deadly diseases are increasing worldwide is because of the technological challenges that led to the increase of harmful emissions, resulting in global warming. The increase in mosquito breeding in open waters, bathing in pools, and other ways to be contaminated with the Schistosoma’s larvae might result in harmful diseases. With the use of western diets in developing countries, food-related diseases started increasing in the long run.

The western style that took place through Globalization has led the adults and the youth to lose their core values leading to several diseases like AIDS or HIV that have a long-term effect on the country’s society and economy. Before the liberalization came into practice, the coffee farmers of Uganda had a Coffee Marketing Board organized by the Government that worked as a middle man between the farmers and the foreign buyers. Even though the farmer’s infrastructure cost was to be paid, they were assured of a standard price. However, with the introduction of Globalization, Coffee making board was abolished, and the farmers had to shelter in the unpredictability of the world market. Impact of Globalization on Employment

With the introduction of Globalization, the structure of employment opportunities in developing nations has taken a turn. Before the inception of Globalization, the main source of occupation and economy in developing countries was based on agriculture among both men and women. With the introduction of foreign industrial corporations, the section of people has shifted their occupation from agriculture and joined industries as laborers required for mass production. This led to a small scale of people working in the fields. Evidence shows the decrease of male workers in agricultural areas by sixty-two percent and the female workers by fourteen percent. The increasing unstable income and unemployment with no guarantee of their future result from the employment structure in the developing countries.

Globalization has led to mass unemployment as multinational companies outsource their services. The three main changes that Globalization leads people to are the changes in their income as laborers, changes in prices, and household production-consumption. Before Globalization, there was a difference between skilled and unskilled laborers. However, with serialization, the demand for educated workers gradually increased in the developing countries. Among several debates, the only conclusion found to be similar is that there has been the development of inequalities with Globalization in developing nations.

Impact of Globalization on Cultural Boundaries

Before Globalization came into existence, the native countries had their own culture and practices. It leads to the extinction of various native languages in developing countries. Today, people are keen to learn the common language around the Globe, English, and thus, the cessation of languages is taking place rapidly. The blend of western and local culture has led to the declination of cultural barriers, which has led people’s individuality and culture to fade away. The imbibing of extremist ideas and adaptation of multiple cultures has led to multiculturalism, causing terrorist attacks and suicide terrorism in countries like Sudan, Egypt, Tunisia, Somalia, and many more.

The free trade areas in the developing countries that welcome the foreign investors have turned to adapt more negative points than positives. The female workers of factories are physically and verbally abused to keep up with the foreign industrialists’ production demands, as mentioned in 2003, “The Hidden Face of Globalization”. To maximize production and profit, many multinational companies avoid maintaining a secure and safe environment for their workers. The Philco Ford assembly plant in Taiwan was recorded to kill twelve female workers due to toxic fumes. All these are also leading to a toxic environment harming the eco-friendly areas of the developing countries. Other than these, human trafficking, cheap labor, and other illegal practices are also a result of Globalization.