Attempt all questions from this Part.

Question 1:
(a) Who administers the oath of office to the Council of Ministers ? [1]
(b) Why is the Rajya Sabha called a ‘Permanent house’ ? [1]
(c) State the minimum number of times the Lok Sabha must meet in a year. [1]
(d) State the composition of the Electoral College in the election of the President of India. [1]
(e) What is an ‘Ordinance’ ? When can it be passed ? [1]
(f) Mention one way by which the authority of the Prime Minister can be checked ? [1]
(g) What is understood by the term ‘Individual Responsibility’ in a Parliamentary Democracy ? [1]
(h) What is meant by a ‘Single Integrated Judicial System’ as provided in the Indian Constitution ? [1]
(i) What is the ‘Appellate Jurisdiction’ of the High Court ? [1]
(j) State one point of distinction between the Disctrict Judge and the Sessions Judge. [1]

Answer:
(a) The President.

(b) The Rajya Sabha cannot be dissolved. Each member of Rajya Sabha is elected for a term six years. l/3rd of its total member retire at every two years and there are new entrants. Thus the House is never empty. It is a permanent body. It has to play the major role during the periods when Lok Sabha is dissolved.

(c) Lok Sabha must atleast meet two times in a year. Normally three sessions are held in a year.

(d) The President is elected by the members of an Electoral College consisting of :

(e) An ordinance is a direction or command of an authoritative nature. It has the same force and effect of an Act of Parliament. The ordinance is passed at a time when both the Houses of Parliament are not in session.

(h) We have a Single Unified Judiciary which means all the courts interpret and enforce the State Laws as well as the Laws made by the Union Parliament. The law declared by the Supreme Court shall be binding on all courts within the territory of India.

(j) The Sessions or Additional Sessions judge can alone award death sentences or life imprisonment. The District judge exercises administrative control over the Civil Courts of the District.

Question 2:
(a) State any two political causes responsible for the First War of Independence. [2]
(b) What was the role of the press in promoting nationalistic sentiments amongst Indians ? [2]
(c) Mention two important contributions of Lala Lajpat Rai. [2]
(d) What were the two basic reasons responsible for the Surat Split in 1907 between the Early Nationalists and the Assertive Nationalists ? [2]
(e) Mention any one provision each of the Gandhi-lrwin Pact signed in 1931. [2]
(f) State two important objectives of the Indian National Army. [2]
(g) Name the three members of the Cabinet Mission. [2]
(h) Mention any two terms of the Treaty of Versailles signed on June 28, 1919. [2]
(i) State two factors which were responsible for the failure of the League of Nations. [2]
(j) Mention two functions of the General Assembly. [2]

Answer:
(a) The two political causes responsible for the First War of Independence were :

(b) The printing press played a big role in carrying ideas to the people. Many nationalist journals were published which aroused the sentiments of the Indian public against the British rule. Many papers fostered patriotism and ideas of liberty and justice in our country. People became aware of rapid political development in the Country.

(c) During the anti-partition agitation he called upon men and women to fight repression with full strength.
He was the first Indian leader to have written about the problems of socialism and labour organization.

(d) The moderates wanted to achieve Swaraj through constitution means and Assertives believed that unless they put stronger pressure on the government they would never achieve their object.
The moderates believed in only resolutions and petitions. After the Partition of Bengal the assertive came to believe that it was impossible to gain any concession by petitions and prayers.

(e) Gandhi-lrwin signed a Pact on 5th March, 1931. One of the. provision was to release all political prisoners except those guilty of violence.

(f) Two important objectives of the INA were :

(h) (i) The Treaty declared Germany guilty of aggression. She had to pay a very heavy war indemnity of 33 billion dollars.
(ii) The area of the Rhine Valley was to be demilitarized Germany could not maintain or construct any fortification on either bank of the Rhine.

(i) Failure of the League of Nations:

Attempt any two questions from this Section.

Answer:
(a) The tenure of the Lok Sabha is five years.
Rajya Sabha is a permanent body. The members of the Rajya Sabha have a six year term. 1/3 of its members retire at the end of every second year and the equal member of new members are elected to fill the vacancies.

(b) Composition of Lok Sabha—The maximum strength of Lok Sabha provided by constitution is 552. 530 members of Lok Sabha are elected by direct election on basis on universal adult franchise and 20 represent Union territories. President nominates 2 members from the Anglo Indian Community.
Rajya Sabha has 250 members. Out of these 238 members are elected by the states and the union territories and 12 members are nominated by the President of India.

(b) Administrative powers of the Cabinet:

Question 5:
With reference to the Supreme Court, explain its functions stated below:
(a) Original Jurisdiction. [3]
(b) Advisory Function. [3]
(c) As a guardian of Fundamental Rights. [4]

Attempt any three questions from this Section.

Answer:
(a) Non-cooperation is a way of protesting in which you do not co-operate with the evil doer. Gandhi asked-his countrymen not to assist the foreign government to rule over them.

(b) Objectives of the Non-Cooperation movement:

(c) Impact of the Movement:

Question 8:
With reference to the picture given above answer the following:
(a) Identify the Viceroy in the picture. [1] 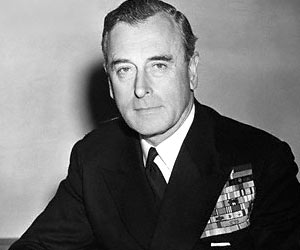 (b) Why was he sent to India ? [2]
(c) How did he plan to solve, the communal problem existing in India ? [2]
(d) Why did the Congress accept the Plan ? State three reasons to justify its acceptance. [5]

(b) Prime. Minister Attlee announced that British would quit India by 30th June, 1948. If the Muslim League did not join the Constituent Assembly the government would have to consider to whom the power of the Central Government should be handed. He replaced Lord Wavell, by Lord Mountbatten to solve the dispute of the Muslim League and the Congress as Muslim League demanded Pakistan.

(c) In the struggle for India’s partition riots broke out in Kolkata, Punjab, Assam and North-West Frontier province. After many consultations with Nehru, Patel, Azad, Jinnah, Liaqat Ali Mountbatten came to the conclusion that the sooner power was transferred the better for all. He was convinced that India was to be partitioned. Transfer of power to Indians could only be on the basis of partition of the country.

(d) The Congress accepted the Mountbatten plan because :

Question 9:
With reference to the causes of the Second World War answer the following:
(a) (i) Explain how the ideologies of Fascism and Nazism led to the Second World War. [3]
(ii) How did the Japanese invasion of China create conditions for the outbreak of the war ? [3]
(b) Explain the consequences of the war with reference to the formation of the United Nations. [4]

Answer:
(a) (i) Fascism: Italy had to spend a lot of money during the First World War on her army and war equipments. She was under heavy debts. Italian government was faced with serious problems of poverty, hunger, disease and unemployment, Riots and strikes broke out all over the country. The government was not strong enough to maintain law and order in the state. In this situation of general lawlessness the Fascist seized the power in Italy. They had an imperialistic attitude. Italy turned towards Germany and Japan and concluded a treaty of friendship leading to Berlin-Rome-Tokyo Axis in opposition to Franco-British Alliance. In 1940, Italy entered the Second World War.

Nazism: Hitler preached the Gospel of Victorious sword. He broke the bonds of the Treaty of Versailles and began to build up Germany’s armed forces. In March 1938, he made his first move to occupy Rhineland that had be demilitarized by the Treaty of Varsailles. He then captured Vienna. Soon he turned his attention to Sudetarland. The Czech government accepted the Munich Pact in the interest of Peace and Hitler’s troops occupied Sudetarland. Soon in March 1939 Germany invaded rest of Czechosolvakia without any justification. Hitler wanted to occupy Darzig corridor because it was mostly occupied by Germans and also he could connect East Prussia with Germany. On 1st September, 1939 Germans stormed into Poland. On 3rd September Britain and France declared war on Germany. Thus the Second World War began.

(ii) Japan’s invasion of China: An important act of aggression after the First World War was the invasion of China by Japan in 1931. China appealed to the League of Nations to declare sanctions against Japan but Britain and France, the leading members of the League did not give any attention. Japan occupied Manchuria and set up a government there. In 1933 Japan left the League and started occupying British and American properties in China but Britain and France followed the policy of appeasement thinking Japanese could be used to – weaker China. On 7th December, 1941 Japan attached the US Fleet in Pearl Harbour in Hawai shocking the American. USA, declared war on the Axis power.

(b) Consequences of the War: Everyone looked for a better and happier world after the Second World War. The horrors of the Two World War and the failure of the League of Nations led to a meeting of the Big Three—Roosevelt (President of USA), Churchill (Prime Minister of Britain) and Stalin (Premier of USSR) at Yalta in February 1945. They resolved to convene a conference of the representatives of all nations to draw up the Charter of the United Nations. This led to the establishment of the United Nations on October 24, 1945. The Wars left a legacy of misery and depression in nearly every country and UNO was established to maintain world peace and secure the economic and social as well as political security to every nation.

Question 10:
With reference to the Non-Aligned Movement, explain the following:
(a) ‘Non-Alignment’. [2]
(b) Two factors responsible for its formation. [4]
(c) Role of Pt. Jawaharlal Nehru. [4]

Answer:
(a) Non-Alignment: The term Non-alignment may be differently interpreted. Negatively a country that is non-aligned does not support or is not part of any Power Blocs.
Non-Alignment aimed at keeping away from the Cold War. It should not be considered isolationism. It means the nations which are non-aligned judge each issue on its own merits and do not toe the line of one or the other super power.

(b) Factors Responsible for its formation: