Question 1:
(a) Explain two factors on which supply of labour depends. [2]
(b) Mention two functions of capital. [2]
(c) Explain one contribution of land to production. [2]
(d) What is the Bandwagon effect? [2]
(e) How does division of labour help in production? [2]

Answer:
(a) The two factors on which supply of labour depends are:

(b) Two functions of capital are:

Question 2:
(a) How is supply of labour different from supply of other goods? [2]
(b) What is a central bank? [2]
(c) Government allows a subsidy to a seller. Show its impact on the supply curve. [2]
(d) Differentiate between an entrepreneur and an organizer. [2]
(e) State two factors affecting market demand for a commodity. [2]

Answer:
(a) There is a difference between the supply of labour and that of other goods. An individual’s supply of labour may increase at first with the increase in wage rate i.e., the price of labour. In that case, the worker prefers income to leisure. However, man is not a machine. So with further increase in the wage rate (per hour), the worker may prefer leisure to income. Thus, the individual labour supply curve may be backward bending in nature. However, in case of other goods, the quantity supplied increases with an increase in product price. In that case, supply curve will be upward rising.

(c) By providing government subsidy to seller, supply increases because seller will be able to produce commodities at a cheaper price thus the supply curve will shift rightward. 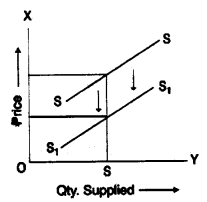 (d) The differences between an entrepreneur and the organiser or capitalist are:

(e) Two important factors which affect the market element for a commodity are as follows:

Question 3:
(a) Mention two points of distinction between tax on income and tax on commodity. [2]
(b) Name the most popular tax system. Give one reason. [2]
(c) Draw a perfectly elastic demand curve. [2]
(d) Differentiate between productive and unproductive debt. [2]
(e) What is demand pull inflation? [2] 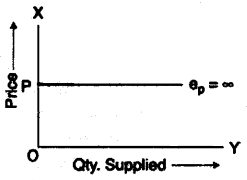 (e) Normal goods are those goods for which the income elasticity of demand become positive (i.e. > 0). It implies that the demand for such goods increases with the increase in money income of the consumer.

Question 5:
(a) Discuss five causes of elasticity of demand. [5]
(b) Explain five determinants of shift in the supply curve. [5]

Answer:
(a) Five causes of Elasticity of demand:

(b) Five determinants of shift in the supply curves:

Question 6:
(a) Explain the importance of Public debt in India. [5]
(b) Mention three merits and two demerits of indirect taxes. [5]

Answer:
(a) Importance of Public Debt in India:

(b) Merits of Indirect taxes:

Question 7:
(a) Enumerate two economic and two social objectives of economic planning.** [5]
(b) Define land. Explain four characteristics of land. [5]
** Answer has not given due to out of present syllabus.

Answer:
(b) In economics, the word ‘land’ is defined to include not only the surface of the earth but also all other free gifts of nature. For instance, mineral resources, forest resources and, indeed, anything that helps us to carry out the production of goods and services, but is provided by nature, free of cost. In fact, ‘Land is a stock of free gifts of nature,’
The features of land are as follows:

(b) Some of the quantitative credit control instruments adopted by the RBI are as follows:

Question 9.**
(a) Define economic planning. Stale any three achievements of economic planning in India. [5]
(b) Explain different ways in which commercial hanks advance loans to the public. [5]
** Answer has not given due to out of present syllabus.

Answer:
(a) Two favourable impacts of inflation are as follows:

Two unfavourable impacts of inflation are as follows:

(b) Primary Functions of Money: