Question 1:
(a) What is meant by labour in economics? [2]
(b) Construct an imaginary individual supply schedule. [2]
(c) What are complementary goods? Explain its impact on demand. [2]
(d) State two qualities of a successful entrepreneur. [2]
(e) Explain any one disadvantage of division of labour. [2]

Answer:
(a) Meaning of Labour: In economics ‘labour’ means the capacity to exert physical or mental effort in expectation of reward.
(b) Individual Supply Schedule for Apples 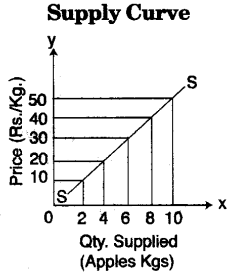 (e) One disadvantage of division of Labour:
Retarded personality: Repetition of the same task again and again leads to intellectual dullness. It kills the initiative and weakens the desire to learn. As a result the development of physical and intellactual personality of a worker may be retarded.

Question 2:
(a) What do you understand by bank rate? [2]
(b) Classify the following into fixed and working capital. Give Reasons:

(c) Identify the market forms for the items given below:

(d) Define Real Capital. Give two examples. [2]
(e) When is the demand for a good said to be perfectly inelastic? [2]

(e) Demand for a good is said to be perfectly inelastic when the quantity demanded does not change in response to any change in the price of the commodity. No matter what the price is, the same quantity is demanded.

Question 3:
(a) Briefly explain why direct taxes foster civic consciousness among people. [2]
(b) What is the impact of division of labour on cost of production? [2]
(c) The price of a commodity rises from Rs. 20.00 to Rs. 40.00. Consequently its supply increases from 100 units to 400 units. Calculate the price elasticity of supply. [2]
(d) State two agency functions of a commercial bank. [2]
(e) Give two reasons in favour of privatisation of Public Sector Enterprises [2]

Answer:
(a) Direct taxes inculcate a spirit of civic and social responsibility amongst the taxpayers in the sense that the taxpayers feel that they have contributed to the cause of the society.

(b) Impact of division of labour on cost of production:
Reduction in Cost of Production: The specialised worker with the help of machines, produces more quantity of goods in less time and with minimum wastage. This reduces the cost of production thereby resulting in more profits to the producer.

(e) Arguments in favour of privatisation

Question 4:
State whether the following statements are true or false Give one reason for your answer.
(a) Construction of dams can have negative impacts on the eco-system. [2]
(b) The demand for inferior goods rises when the income of a consumer increases. [2]
(c) A monopolist can sell the same product at different prices to different customers. [2]
(d) During inflation the debtors gain and creditors lose. [2]
(e) Labour is the beginning and end of production. [2]

Answer:
(a) True: Construction of dams Have submerged large areas of agricultural land and forests surrounding these dams, thereby reducing the area under agriculture and forested land and causing ecological disaster.
(b) False: When a consumer becomes richer he will start consuming more of a superior commodity in place of inferior commodity.
(c) True: Monopoly is a market structure in which there exists only a single seller of the product, which has no close substitutes.
(d) True: Debtors benefit during inflation because they had borrowed money when the purchasing power of money was high and they return it when its purchasing power has fallen due to price rise. While creditors tend to lose during inflation since the loan repaid and interest received would have less real value as a result of rise in prices.
(e) True: Labour is a human factor and human beings serve as both end and means of all economic activities.

SECTION-II  (60 Marks)
(Answer any four questions from this section)

Question 5:
(a) What is demand? Explain how quantity demanded of a commodity X will be affected by:

Answer:
(a) Demand: Demand for any commodity refers to the quantity of that commodity which consumers are willing to purchase at different prices during a given time of period.

Suggestions to improve the quality of labour in India:

Question 6:
(a) With reference to land as a factor of production:

(b) What is meant by an indirect tax? Give two examples. Explain briefly two merits and two demerits of Indirect tax. [8]

Fundamentally speaking, ‘land’ is the original source of all material wealth and it is of immense rise to mankind. Inspite of being a passive factor, it is an important factor of production. An overall economic prosperity of a country is directly related to the richness of its natural resources.

(b) The tax which is paid by some person but their burden or incidence is borne by some other person, is called an Indirect tax. Taxes which are imposed on expenditure incurred on commodity are regarded as indirect taxes.
For Example—Excise duty, Custom duty, Sales tax etc.
Two merits of indirect taxes:

Question 7:
(a) Define Ecosystem. Explain any two impacts of each of the following on the eco system:

Answer:
(a) Ecosystem: An Ecosystem is a complex set of relationship among the living resources habitats and residents of an area but changing global pattern of land use have had a significant negative effect on ecosystem.
There is a biotic balance in an ecosystem, which makes it possible to sustain the various interdependent members (plant and animal life). Ecosystem maintains a very delicate balance. Various human activities have been done to disrupt this balance and destroy the world’s ecosystems.

Question 8:
(a) Define money. Explain how money can:

(b) Explain clearly four ways by which the State can promote economic growth and development. [8]

(b) Commercial bank is a financial institution which deals in money i.e. borrowing and lending of money. It performs the functions of accepting deposits from the general public and giving loans for investing to them with the aim of earning profit. The three methods adopted by commercial banks to mobolise funds from the public are as under:

Question 10:
(a) Read the extract given below and answer the questions that follow:
Aug 17,2015
Mumbai Bankers today said, the sharp fall in inflation to 3.38% for July has raised hopes of another rate cut by RBI at September review of the policy. “Obviously, if more find’more and more positive news on inflating front comes. It’s a reasonable expectation to expect that rules will be out at the September policy”, reported Mr. Aditya Puri the Mangaing Director of HDFC Bank. He said the Governor of RBI, Mr. Raghuram Rajan had earlier said that RBI is actively looking at rate cut.

(b) Explain four ways by which an entrepreneur can promote economic development. [8]

(b) Ways by which entrepreneur can promote the economic development of a country: