Hyderabad Essay: Hyderabad is the capital of southern India’s Telangana state. Telangana’s largest and most populous city is the primary urban centre for all south-central interior India. Around 8 million, the city has been estimated population.

We are providing students with essays on a long essay of 500 words and a short essay of 150 words on the topic of Hyderabad.

Hyderabad state is also called Hyderabad Deccan. And the location is in the south-central region of India, with its capital at the City of Hyderabad. Qutb Shahi Sultan Muhammad Quli Qutb founded the city of Hyderabad in 1591 CE. Charminar was built and is the centrepiece of the town. A centre for culture and trading centre for diamonds, pearls because of this season Hyderabad became important. For rich history, food, as well as its multi-lingual culture both geographically, as well as culturally Hyderabad, is famous.

Hyderabad is blessed because of its unique landscape with spectacular rock, which is about 2,500 million years old and is one of the hardest stones in the world.

India gained independence in 1947; the Nizams wanted an independent territory as either a sovereign state or a British Dominion. For the newly formed Indian Union, Hyderabad was Strategically essential. From five Points on September 16, 1948, the Indian marched into Hyderabad state and was forced to surrender and was annexed to Indian Union. Hyderabad was a different state within the Indian Union from 1948 to 1956. Then based on language, the Indian government was formed. As we know, Hyderabad has a Telugu majority and then was made the capital city of Andhra Pradesh.

The state is famous for its beauty as well as affluence. The Mughals conquered Hyderabad. In the year 1956, in Indian Union, the princely state became the state of Hyderabad. The state was then split up in 1956 like its Telugu speaking areas (Telangana region) we’re mixed with then Andhra State for forming Andhra Pradesh and Hyderabad as the capital. Many people in Telangana said and advised that the area must become a different state. All such negotiations were started about the disposition of Hyderabad. Then as per the approval of the Indian Parliament, it was a split, and in 2014, Telangana was formed. For a period of up to 10 years, Hyderabad would be the capital of both states for allowing Andhra Pradesh time to build its capital.

As we know, this era is known for its technological advancement as well as westernization, so Hyderabad has managed to preserve its bosom. The state has a rich historical background as well as was inherited cultural diversity. Hyderabad has a unique combination of two different cultures that and religion is Hinduism as well as Islam. Through the architecture of places of worship in a beautiful and historic city. It is serving with architectural wonders. As we know, it has a beautiful mixture of two different cultures and religions, which is motivating future generations while carrying out its legacy. Hyderabad has the splendid architecture of mosques as well as genuinely impressive temples.

Hyderabad is famous and is known for its food that is Hyderabadi Biriyani. And most people love food. In Hyderabad, the majority is Muslim, and that is the reason why Hyderabadi Biriyani is famous. Hyderabad was built in the Quli Qutb Shah dynasty. Such monuments are examples of its Royal past as this state has marvellous monuments and has elegant architecture and is made with different dynasties and is fantastic. 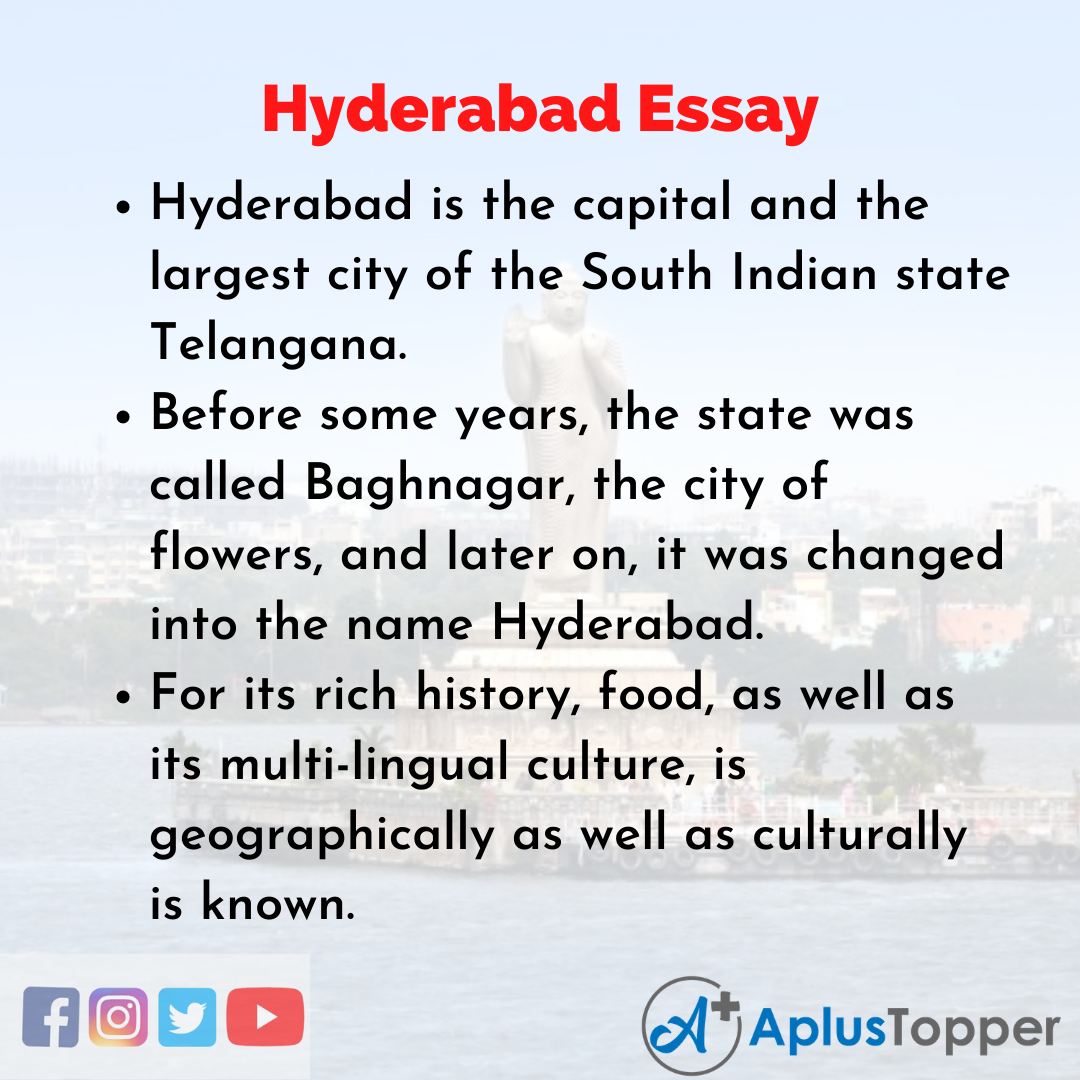 On the Musi River, which is the heart of the Telangana plateau, in Hyderabad, located in a significant region of the upland of the Deccan. Hyderabad’s climate is warm to hot and monsoonal, which is marked by wet and dry periods and has moderate annual precipitation. During the wet monsoon months from June to October, it rains.

The people who are living in Hyderabad are known as Hyderabadi, and there are Telugu people. And most people are Telugu as it’s the majority language. The minority community is Kannadiga.

10 Lines on Hyderabad in English Question 1.
What is the climate of Hyderabad?

Answer:
Hyderabad’s climate is hot and dry, too high of 50°; nights are cool and breezy.

Question 2.
What is the famous food of Hyderabad?

Answer:
Hyderabadi Biriyani and Hyderabadi Marag are the most recognized food items of Hyderabad.

Question 3.
What is the language spoken by the people of Hyderabad?

Answer:
Telugu is the majority language. Mostly Hindi is spoken by many people, and Urdu is the second language.