Gloria talks about the various difficulties faced by Chicanos to find their national identity and speak their mother tongue without fear or shame, especially during the period of immigration controversies. The chapter deals with Anzaldua’s take on language and cultural identity.

We are providing students with essay samples on a long essay of 500 words and a short essay of 150 words on the topic ‘How to Tame a Wild Tongue’ for reference.

How to Tame a Wild Tongue starts with the author’s experience at a dentist’s chamber, and according to the dentist, it is her ‘tongue’ which was the real issue here and not the teeth. The way she has referred to this whole incident metaphorically denotes to her language and cultural identity. The author has also shared experiences from childhood which have left deep scars behind.

The lives of the Chicano people living at the border of the USA and Mexico are difficult. It reveals the political, spiritual and socio-economical influence of the European conquest on the natives of the borderlands. Anzaldua didn’t want to let go of her maternal language and her Chicano identity. She proves the futility of changing one’s mother tongue and speaking patterns by switching between Spanish and English. The author has shared one of her experiences at school where an Anglo-American teacher punished her for talking back at her who couldn’t pronounce Anzaldua’s name.

The author has also discussed the cultural and gendered influences of a language. Girls are taught to talk less or not to ask too many questions at an early age. In many parts of Mexico, the female plural is Spanish is not considered in the language. Many natives living here think that the Spanish language is getting ruined as people are more inclined to learn American English.

Gloria has described an evolution of the Spanish language in different parts of the world. Chicano Spanish is the combination of Spanish, English and Native American words. But due to this fusion of different language, the Chicano Spanish language is not considered as a pure language and has been criticized by many. Thus, Chicano people are not comfortable in expressing themselves, and they have been oppressed and humiliated since ages now by the Americans.

Anzaldua expresses her disgrace to this oppression on the Chicano native language. Language is a part of someone’s identity and is a matter of pride and self-esteem. Each language in this world is special and reflects respective cultures. She establishes a strong relationship between her identity and different languages. According to her expression of heterogeneous people, she refers to individuals with a variety of traits face difficulties in explaining themselves and the difference in identity and background also become challenges for them.

In this essay, the author specifies that a particular accent becomes her sole identity. Despite having self-esteem issues, the author does not want that to define her identity. The essay highlights the author’s experience of living in a community that has struggled a lot for establishing their identity for a long time and has been utterly humiliated by the Americans.

Anzaldua says that language is incorporated within oneself. The Chicanos felt a sense of belonging through various Mexican books, poetry and movies, and thus they get an external reinforcement of their heritage and culture. Anzaldua describes the extreme pressure on them to forget their mother tongue. People in the borderlands are often confused about which side do they belong to and which language to speak. The Chicano people have been patient throughout the constant conflicts and confusions hoping one day this will surely end. 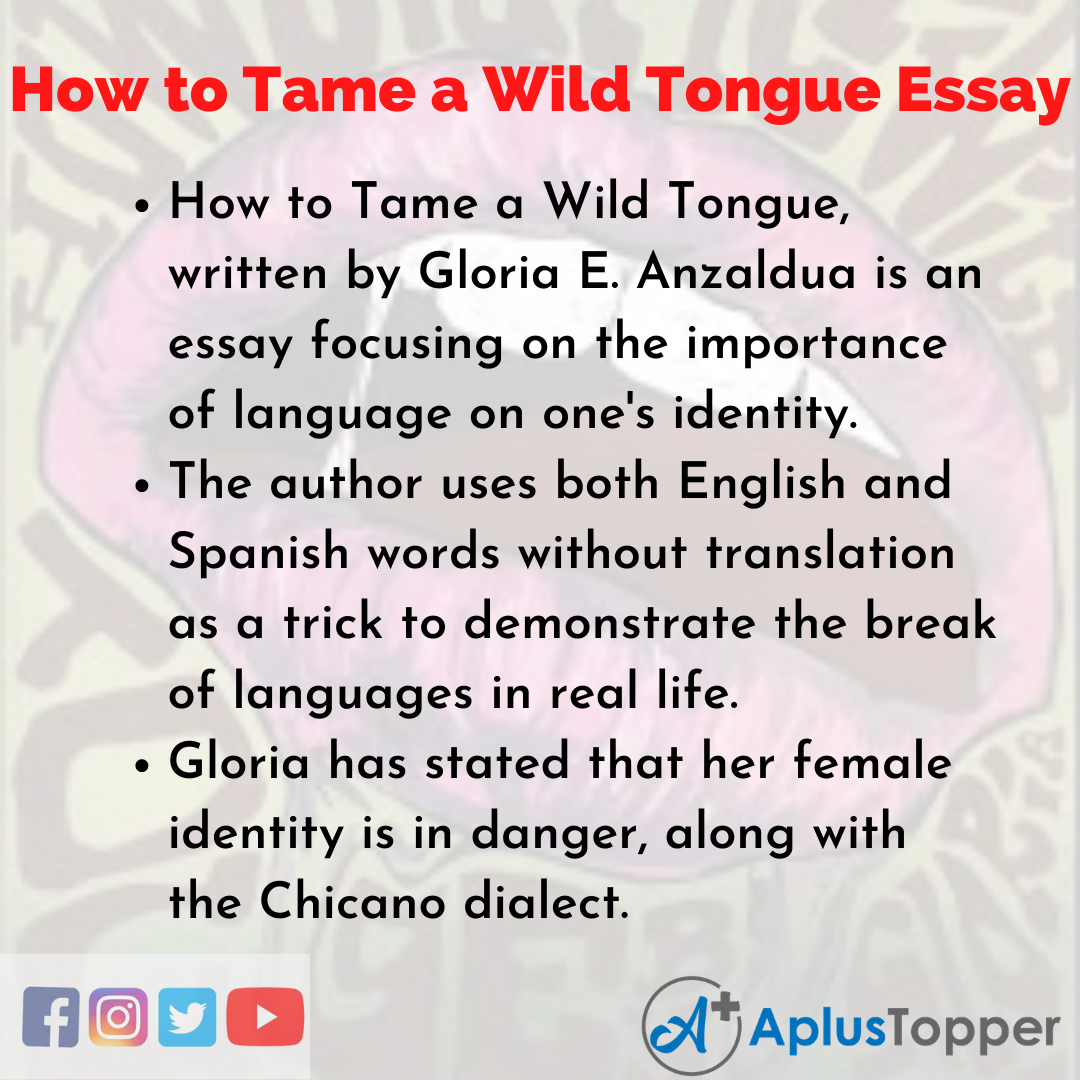 The essay describes the struggles faced by the Chicano people living in the borderland between the USA and Mexico. Gloria E. Anzaldua, the author, has cited various experiences from her life where she has been looked down upon for speaking her mother tongue.

Gloria has stated that her language and her dialect define her identity. In her life, she has been humiliated from speaking Chicano Spanish, which has lowered her self-esteem. Lately, she has realized a language is the key identity of a person, and one should not be ashamed of his/her maternal language. Language and cultural identity are inseparable. Political, geographical and economic backgrounds determine both. Chicano people throughout their lives have been oppressed for speaking a mixed language and are pressurized to eliminate their mother tongue.

Gloria’s writing style is very poetic enough to impress readers. Also, she has used Spanish words here to emphasize the importance of her mother tongue. It is right to be different, and an individual must resist the influences which force him/her to change their identity.

10 Lines on How to Tame a Wild Tongue in English FAQ’s on How to Tame a Wild Tongue Essay

Question 1.
What is the metaphor used as ‘wild tongue’?

Answer:
Wild tongue means one’s language, which is only accepted in his/her native land and is criticized vastly.

Question 2.
Who has written How to Tame a Wild Tongue?

Question 3.
What is the main focus of this essay?

Answer:
The main focus is on the difficulties faced by Chicanos for speaking their mother tongue.