How to Eradicate Corruption Essay: The term corruption is defined as a dishonest or deceitful act. Corruption in civil matters is often considered criminal. Corruption is mostly an act of fraudulence carried out by people who are in positions of authority. In India, corruption has been an issue of concern for years now.

Corruption has been prevalent in society since the shifting of powers from the people to the opportunistic authorities. The British’s advent in India started to significantly affect the middle class, who gradually started occupying essential jobs in the country with their education. This sudden change in power made them greedy and more prone to bribery.

We are providing students with essay samples on a long essay of 500 words and a short essay of 150 words on the topic of how to eradicate corruption.

Long Essay on How to Eradicate Corruption 500 Words in English

Long Essay on How to Eradicate Corruption is usually given to classes 7, 8, 9, and 10.

Corruption can be defined as a dishonest and fraudulent act, mostly practised by people of authority. It includes civil misconduct among opportunistic leaders. In India, corruption has been a norm for years now. Even the British called the Indian officials corrupt.

Corruption can be of varied types.

Bribery: Bribery is the most common form of corruption through which people in posts of authority misuse their power to direct services according to their interests. Many material and monetary gifts are offered by people to these high officials for running certain benefits to their advantages. These are mostly government officials who are susceptible to these fraudulent acts.

Financial Fraud: Financial fraud is also called Embezzlement. This is the act of withholding assets of the public for theft.

Corruption Of Politicians: This is one of the most notable types of corruption, where the people elected for public interests misuse their power for personal gains. There are little to no ways of ever identifying these corruptions in a broken system like India.

Nepotism: Nepotism is a form of corruption where the people of authority reserve specific posts and places of high prestige for the people of either their own family or acquaintances.

Increasing Salary: Since Government officials are the most susceptible to corruption, it is the Government’s responsibility to ensure maximum satisfaction of the employees so that they don’t engage in activities like these. It has been found out that this fraudulence occurs because of the low salary that is paid to the employees. It is often not enough for the officials, and hence they resort to illegal activities. Therefore, the Government should ensure a fair salary to its employees.

Increasing The Number Of Employees: The lack of efficient workers in the government offices often leads to slowing down the critical work. This little progress makes bribery to be the only solution for the fast delivery of work. If these employees’ workload is lessened by employing more numbers of employees, then the efficiency might be affected positively.

Legislation: The Legislation of a country is the most crucial tool to fight corruption. The laws against corruption can be made more stringent to stop officials from corrupt activities. The punishment after breaking the law should also be more robust and harder to pay.

Supervision- Installing cameras and increasing surveillance in government offices or places susceptible to corruption can also minimize the activities. Officials will have a fear of getting caught more often, and rise will mitigate corruption.

Check Inflation- The Government should always keep inflation in check because as the price rises for bare essentials, many employees feel their salary to be less than what they deserve and indulge in corrupt activities.

We also have to keep in mind the corrupt politicians who exercise their power even in the court of law and the entire judicial system. These types of corruption can only be stopped if people elect representatives based on their work and ethics rather than their political supremacy. 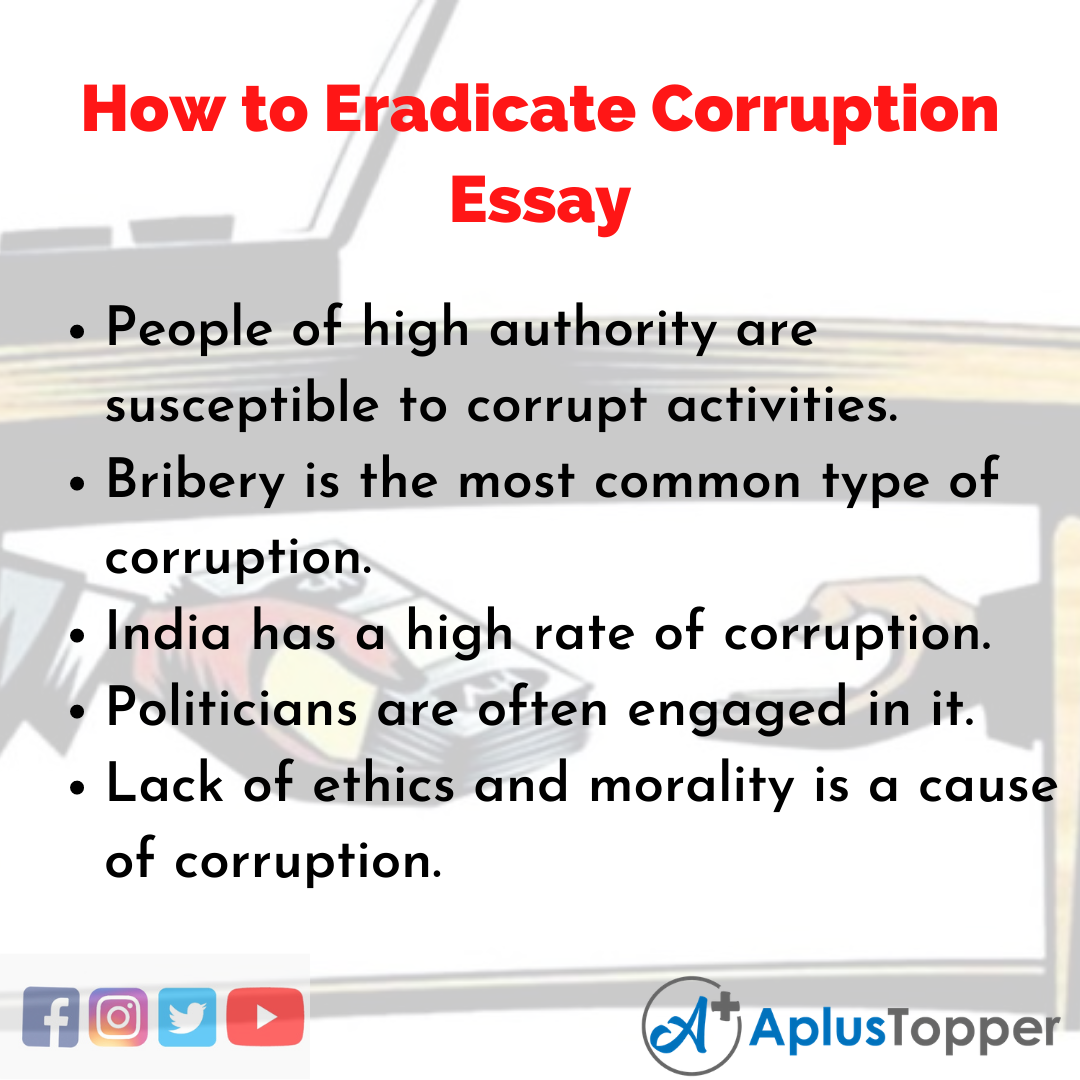 Short Essay on How to Eradicate Corruption 150 Words in English

Corruption is an act of fraudulence often practised by people with authority. These people misuse their power and control their interests. There are different types of corruption. Bribery is the most common form of corruption visible where mostly the government officials take gifts and money from people as bribes to complete their desired works. Other forms are financial frauds, political frauds, and nepotism.

10 Lines on How to Eradicate Corruption Essay in English

1. People of high authority are susceptible to corrupt activities.
2. Bribery is the most common type of corruption.
3. India has a high rate of corruption.
4. Politicians are often engaged in it.
5. Strong legislation can curb fraud.
6. Lack of ethics and morality is a cause of corruption.
7. People are often discontented with the system and hence, resort to corruption.
8. The Right to Information Act is a crucial one to stop corruption.
9. Political Corruption is the worst.
10. Most of the financial frauds in the world are also from India. 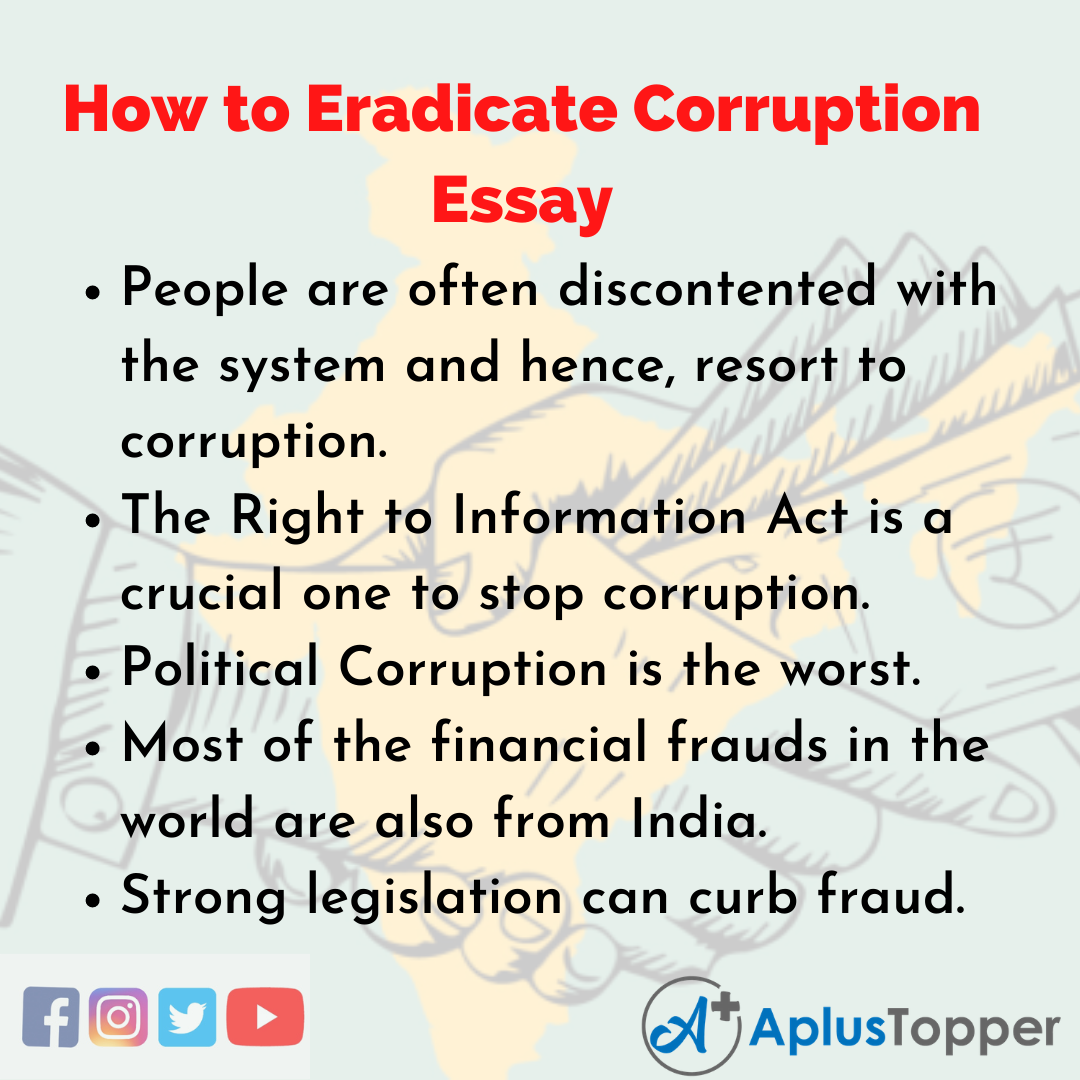 FAQ’s on How to Eradicate Corruption Essay

Question 1.
Can corruption be curbed?

Answer:
Yes, it is possible to curb corruption through vital measures.

Question 2.
Why does corruption take place?

Answer:
Corruption results from people’s growing discontentment with the available resources for which they become greedy.

Answer:
The Right to Information Act is legislation that might help to curb corruption.

Question 4.
What is the essential thing required to have a corruption-free country?

Answer:
The essential thing required for a free corruption-free country is the necessary knowledge and awareness of moral and ethics.