Hockey Essay: Field hockey is a game that is played with a stick and a ball. Hockey requires two teams, comprising eleven members on each side. The motive or aim of the sport is to score as many goals as possible against the opposite team.

Hockey is our national sport and is widely respected in India. Not only are we proud to have brilliant hockey players amidst us, but we are also honored to have received an opportunity to master this genius game. In this article, we have provided a detailed essay, a brief essay along with ten lines on Hockey.

We have given below a Long essay composed of 500 words and a short piece comprising 100-150 words.

Field hockey is a widely played team sport in our country. It is played on grass, artificial or watered turf, or synthetic fields. Each team has ten players and a goalkeeper.

Hockey is played with a curved stick. The aim is to move the ball forward with the curve end of the stick and score a goal. The strikers are exceptionally skilled at hitting the targets so that their shots successfully enter the goal post. The goalkeeper has the responsibility of obstructing the goals the opposite team seeks to score.

Hockey is a sport that requires a lot of practice and dedication. Hockey is usually played on a rectangular field, and it is an outdoor sport. The goalkeeper wears a heavily padded jersey and helmets and stands in front of the goal post with a curved hockey stick. A hockey stick sort of looks like the alphabet “J.” The goalkeeper has to wear protective suits because the ball, when struck with the hockey stick, rushes towards the goal post at a very high speed, and lack of padded suit may cause severe injuries.

The game always starts with a toss between the captains of the two teams. The person who wins the toss can either select his side of the field or choose to pass it first. The game is played for 75 minutes in each session. There are two rounds of thirty-five minutes each and one break in between the two series. This time is used for medications, strategic planning, treatment, etc.
The teams take their positions on respective fields, and one side makes a center pass.

The game continues as the crews pass the ball to each other, try to keep their opponents away from the ball, and seeks to score goals. In the end, the team with the higher number of goals win the match. In case of a draw between the groups, one minute of extra time is awarded initially. If the teams still cannot score and the draw remains unresolved, then a shootout happens. In a shootout, three members from each team get a penalty stroke. The team that scores more is declared to be the winners of the match.

Both men and women in India play field hockey. India’s women’s hockey team struggled to get a place in this man’s world. But, they never gave up and kept trying with their strength and determination. Hockey requires vigorous practice and professional training. Individuals who play Hockey professionally have to work day and night to earn their titles. They put in inhuman amounts of effort and insane hours of practice before they bring back glory to their countries.

Apart from field hockey, there is also ice hockey that is played on ice skating rings. Bandy, roller hockey, street hockey is all various types of Hockey played. It is of great pride for our country that Hockey is our national sport. 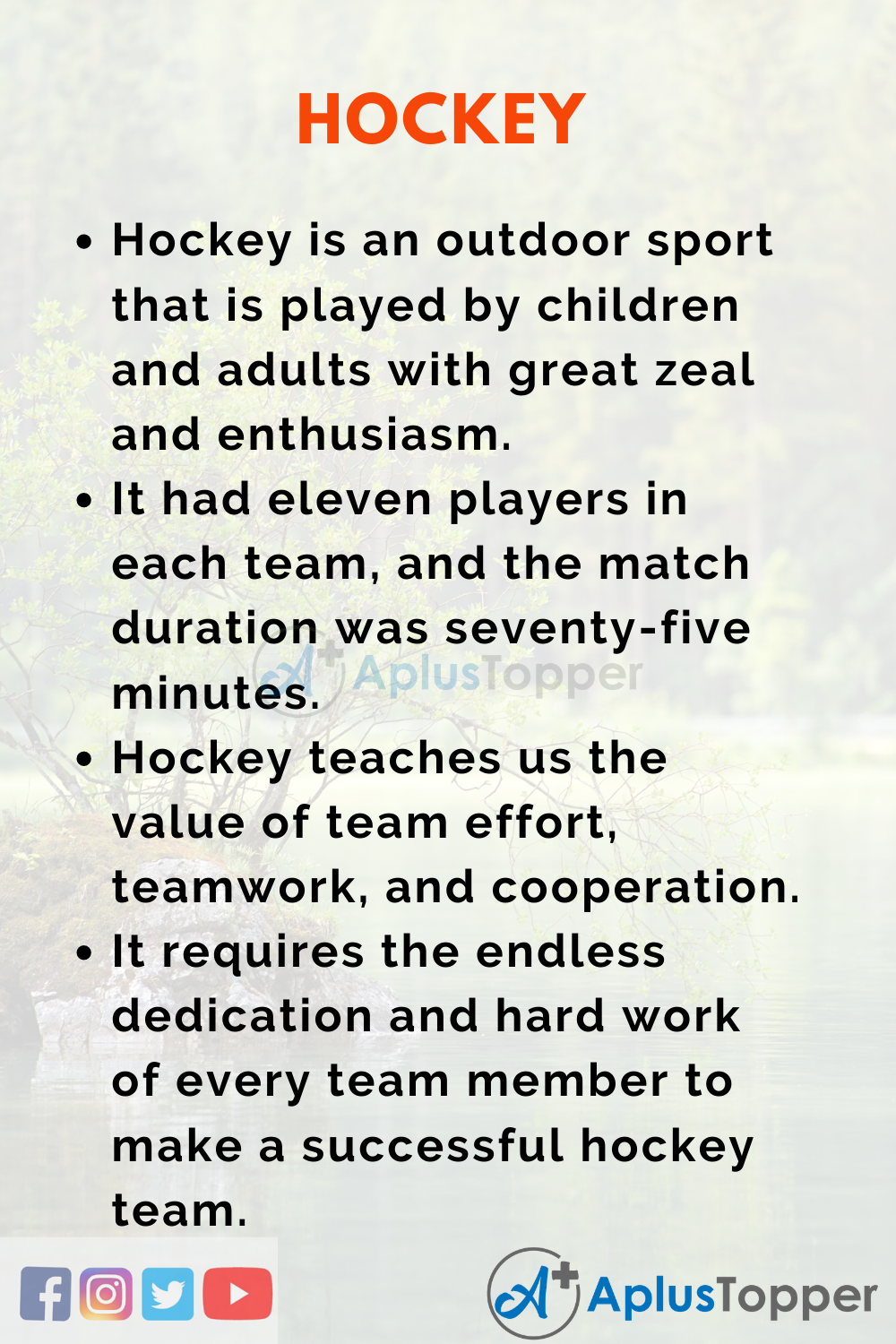 Hockey is an ancient and respectable sport in India. Players like Dhyan Chand and Balbir Singh Sr have brought further victory to our country with their outstanding skills in Hockey. History is our national game only due to the rich cultural heritage and popularity of Hockey as a sport. Even when Cricket was not a popular sport in India, Hockey had stolen the hearts of millions of people. India won every Olympic medal for Hockey between 1928 to 1956. Due to such genius victories and impeccable success, Hockey is the national sport of India. Hockey encourages team effort and teaches the value of co-operation.

10 Lines on Hockey essay in English 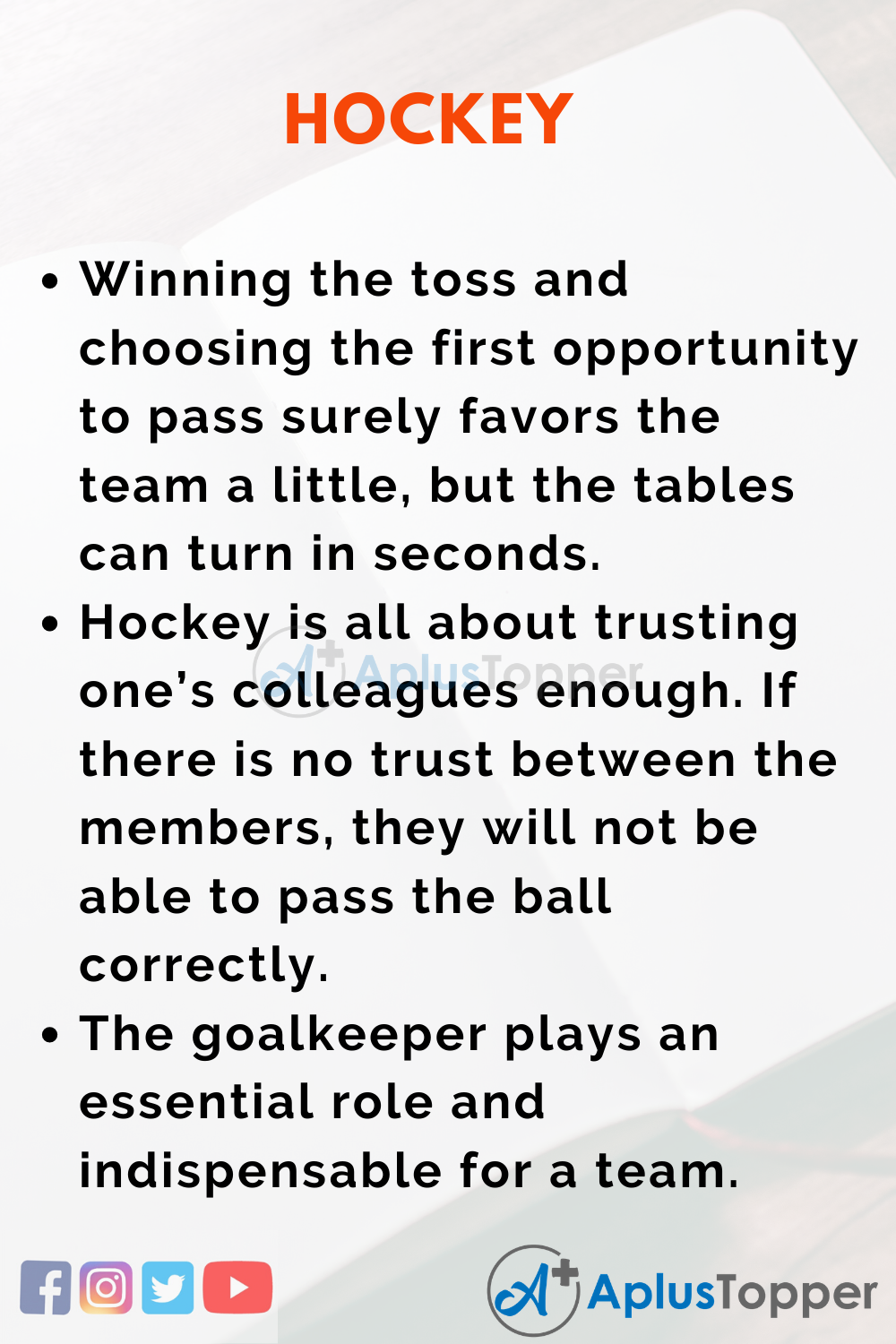 Question 1.
How is Hockey played?

Answer:
Hockey is played with a ball and a J-shaped curved stick. The players pass the ball with the curved end of the stick and aim to score maximum goals.

Question 2.
Can Hockey be played indoors?

Answer:
Hockey can be played in stadiums and artificial turfs, but it cannot be played indoors, inside houses.

Question 3.
How can I learn Hockey?

Answer:
Learning Hockey requires professional training. One needs a coach and a proper place to practice. In India, there are several centers where experts teach Hockey.

Question 4.
Is a career in Hockey affordable?

Answer:
To become a professional hockey player, one must make preparations to struggle hard. The sport requires devotion, dedication, and determination.