Heart of Darkness Essay: Joseph Conrad is a Polish-English novelist who published the novella, Heart of Darkness in the year 1899. The novella is about an expedition up the river of Congo into the Congo Free State in the Heart of Africa.

Translated into many languages, Heart of Darkness has been widely republished many times. To celebrate the thousandth edition of the magazine called Blackwood’s Magazine, the novella was initially issued as a three-part serial story in the magazine.

We provide students with essay samples on an extended essay of 500 words and a short essay of 150 words on the topic Heart of Darkness for reference.

Long Essay on Heart of Darkness 500 Words in English

Joseph Conrad’s Heart of Darkness could justifiably be described as an introverted journey, including thoughtful change in the voyager. Both metaphorical and literal journey was taken on by Marlow, the protagonist of the novel, into the “heart of darkness”. The journey makes Marlow question the presence and conflict of light and dark within each person.

During the journey, Marlow realizes that every human has the presence of evilness within themselves. Hence, he sees that evil supremacy at the centre of humanity, which helped him in emerging as a new man from the journey. The readers of the novella also realize although indirectly that Kurtz, who was a well-reputed ivory trader and the antagonist of the novel, transformed from a man with good-intentions to one who gives in to his deepest desires and lusts.

Throughout the novel, the changes which came inside him was hinted. The mental change inside Marlow’s character has a massive connection to what he witnessed in Africa. As Conrad himself caught many of the carnages under the empire of Leopold II, when he captained a ship in the Congo in 1890, readers assume that many of the horrible things that Marlow observes that guides his change of views regarding humanity are directly inspired by the personal experiences of Conrad.

According to the setting of the story, Marlow was in a way was obsessed with the successful ivory trader Kurtz and he witnessed Kurtz demise at the end. Here Conrad offers parallels between Africa which are seen as the place of Darkness and London, which is the most significant town on earth.

Heart of Darkness indirectly comments on racism and imperialism. The fundamental of Conrad’s work is the idea that there is a slight difference between the people who are termed savages and the people who are considered civilized.

The novella has provided various inspirations in many authors and movie directors such as Francis Ford Coppola was inspired for a film named Apocalypse Now in the year 1979. In the list of 100 best novels in English of the 20th century, the Modern Library ranked Heart of Darkness 67th on their list.

Although the events depicted in the heart of Darkness could have happened anywhere, but Conrad chose the Congo as the leading centre because of the impact and feelings of the climate, the persons involved and also due to the very way of life there.

Conrad creates a mysteriousness and high-tension which originates one to wonder what might happen next and even though nothing extraordinary occurs, each one of the events adds up to the foreboding of the story. The story gives the idea of how even the best of intentions might turn into something twisted and evil even oppressive. 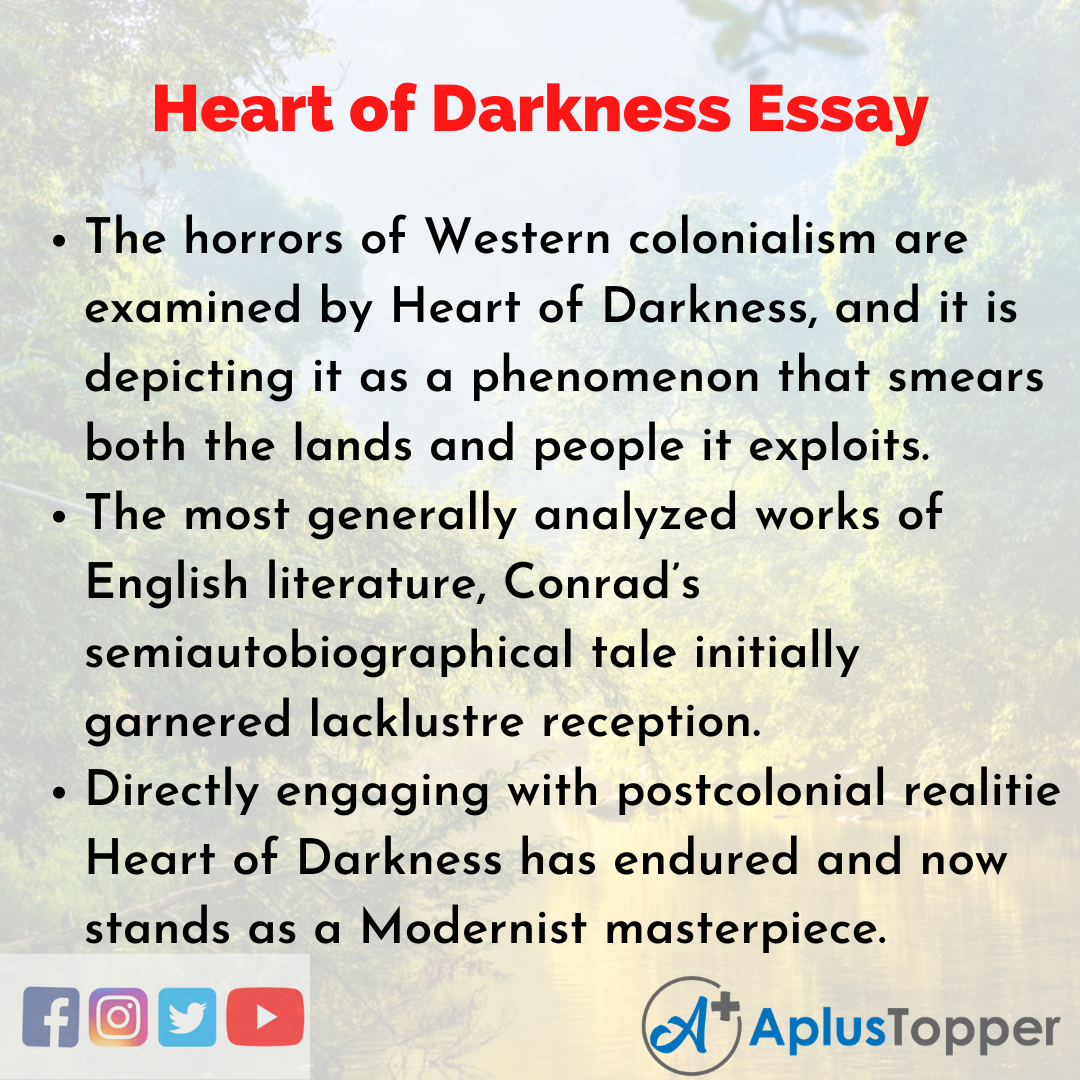 Short Essay on Heart of Darkness 150 Words in English

In the English language, Heart of Darkness is considered as one of the greatest novellas. Although from the exterior, it may seem like a dreamlike tale of adventures and mystery, which is set in central Africa, it is the story of man’s emblematic journey into his inner being. The ambiguity of Conrad’s narrative and conflicting interpretations of its actual meaning was contributed by the profusion of vivid details that are important on both symbolic and literal levels.

The Heart of Darkness was written in 1899 and was initially published in the blackwood’s magazine in a serial form, but finally, it was published in the form of a book in 1902 which was named Youth: A Narrative, and Two Other Stories. Later in the year 1942, it was published separately. Many believe that the characters and incidents in the Heart of Darkness were written based on factual bases and from personal experiences of Conrad and as evidence of this speculation a diary was found during the subsequent voyage.

10 Lines on Heart of Darkness Essay in English

1. Joseph Conrad published his novella, Heart of Darkness, in Blackwood’s Edinburgh Magazine in 1899, and later he published it in his book named Youth: and Two Others Stories in the year 1902.
2. The horrors of Western colonialism are examined by Heart of Darkness, and it is depicting it as a phenomenon that smears both the lands and people it exploits.
3. The most generally analyzed works of English literature, Conrad’s semiautobiographical tale initially garnered lacklustre reception.
4. Critics did not favour Heart of Darkness initially and rebuked its dehumanizing representation of imperialized people and dismissive treatment of females.
5. Directly engaging with postcolonial realities, Heart of Darkness has endured and now stands as a Modernist masterpiece.
6. Heart of Darkness, although received acclaim among Conrad’s literary circle, the story failed to secure any popularity. Neither when it was published in the magazine nor when it was published as a book.
7. In the 1940s and ’50s, the novella started to gain academic attention as in that period; literary studies were dominated by psychological approach of literature.
8. The novella was understood as an exploration universally of human inferiority.
9. Most of the contemporary analysis is centred not one the text itself but on other commentaries of the book, which thereby elucidates the way that academia might inadvertently spread some of the work’s troublesome element.
10. Heart of Darkness is occupying a position which never changes in the West’s literary canon as an artefact that is the result of human depravity. 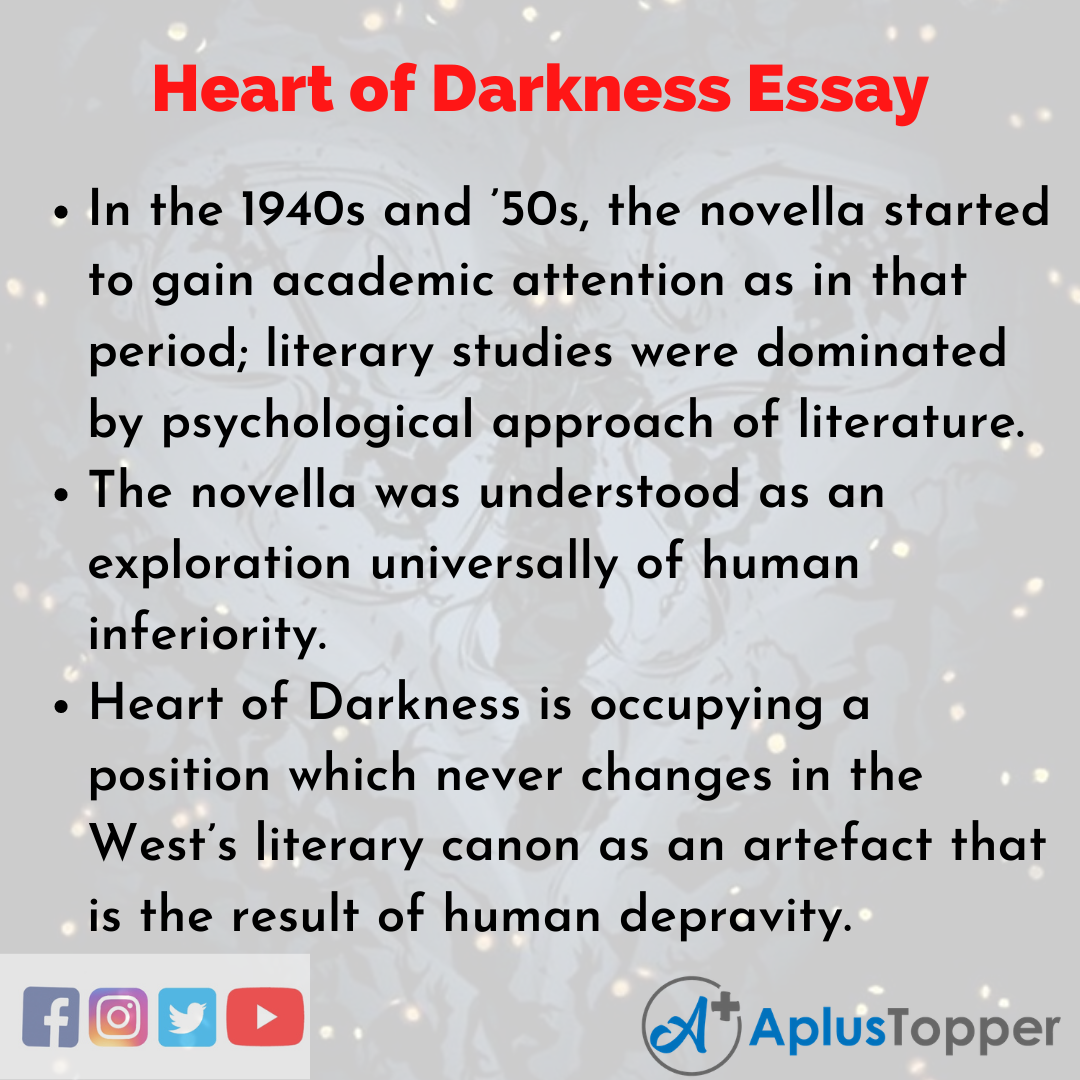 FAQ’s on Heart of Darkness Essay

Question 1.
What does the word ‘heart’ and ‘darkness’ means in the Heart of Darkness?

Answer:
The term ‘heart’ in the title ‘heart of darkness’ means the centre and ‘darkness’ represents wither the unknown or evilness. In the novel, the nature of Darkness symbolizes the African jungle through which Marlow is venturing to find a shadowy associate named Kurtz.

Question 2.
What is the message conveyed by Conrad in the Heart of Darkness?

Answer:
Conrad wrote this novel to expose the baleful tasks taking place all the time in our world and the book revealed all the evilness in the world, not just among the people. He exposed the horror of the planet that all individuals are responsible for in his work.

Question 3.
What did ivory symbolize in the Heart of Darkness?

Answer:
White Ivory is the only thing that Europeans valued in the novel Heart of Darkness which could be found in Africa, but it also equated with corruption and Darkness.

Question 4.
In what sense did the main protagonist, Marlow change in the Heart of Darkness?

Answer:
In the novel Heart of Darkness, the main character Marlow changes in the sense that he moves towards the center of the earth, taking on a whole different and new perspective and moves away from the evilness.