Hamlet Essay: The tragic play written by William Shakespeare, Hamlet, is a milestone in Shakespeare’s dramatic development in the world of literature. It is believed that Hamlet was written sometime in 1601 or 1602.

The playwright, Shakespeare has achieved a very creative matureness in work by his depiction of the main character’s struggle with two polar opposite forces: one being the need to avenge his father’s assassination and other being moral integrity. Hamlet is known as Shakespeare’s most successful, ideal and best plays in his lifetime, along with another tragic play, Romeo and Juliet.

We are providing students with essay samples on a long essay of 500 words and a short essay of 150 words on the topic Hamlet for reference.

Hamlet also was known as The Tragedy of Hamlet; Prince of Denmark is a tragedy play written by William Shakespeare. It was written sometime between the year 1599 and 1601. The play is set in Denmark, and it is based on the main character, Hamlet, whose father the king Hamlet was murdered by his uncle Claudius who then hastily remarried his mother to seize the throne.

The heftiest and influential works in the world of literature, Hamlet is a story efficient of seemingly limitless recurring and adaptation by others. Shakespeare’s Hamlet originated from the legend of Amleth which was conserved by Saxo Grammaticus, a 13th-century chronicler, in his GestaDanorum and was retold by scholar Francois de Belleforest in the 16th century. From Charles Dickens and Johann Wolfgang von Goethe to Iris Murdoch and James Joyce, Hamlet has inspired many other.

An earlier Elizabethan play known as Ur-Hamlet was also believed to have been drawn by Shakespeare, though many scholars suspect that the well-known Hamlet is the revised version of Ur-Hamlet written by Shakespeare. It is almost certain that Shakespeare wrote his version for the title role for his fellow actor and the leading tragedian of Shakespeare’s time, Richard Burbage. The role has been performed many a time by famous actors even after 400 years of its inception.

The First Quarto; the Second Quarto and the First Follo are the three early different versions of the play, and each version includes entire scenes and lines which are missing from the other versions. The critical scrutiny of the play was inspired by the play’s structure and depth of characterization. An example of one such scrutiny in the play is Hamlet’s hesitation while killing his uncle as some saw it as a dramatization of the complicated ethical and philosophical issues surrounding the calculated revenge, foiled desire and the cold-blooded murder. At the same time, some argued that it is merely a plot device to elongate the action of the play.

You can now access Essay Writing on Hamlet and many more topics.

Recently feminists’ critics have examined and attempted to reintegrate the often-scorned characters of Gertrude and Ophelia while psychoanalytic critics have evaluated Hamlets’ unconscious desires. The play topped the performance list of the Royal Shakespeare Company and its forerunners in Stratford upon Avon since 1879.

The Hamlet-like legends are extensively found in Spain, Byzantium, Italy, Arabia and Byzantium and theme is possibly from an Indo-European origin with the core as “hero-as-fool”. According to Stephen Greenblatt’s argument, Hamlet was written tragically by Shakespeare due to his grief for the loss of his son, Hamnet Shakespeare, who died in 1596 at age eleven. But this idea was rejected by many scholars.

As recommended by Baldassare Castiglione’s 1528 etiquette guide, The Courtier, much of Hamlet’s language is courtly that is elaborate and witty discourse. As death is the main cause and result of the revenge for Hamlet, it is very intimately tied with the theme of revenge and justice. The start of the quest is caused by Hamlet’s uncle, who caused his father’s death, and the quest ends with the death of his uncle in the play. 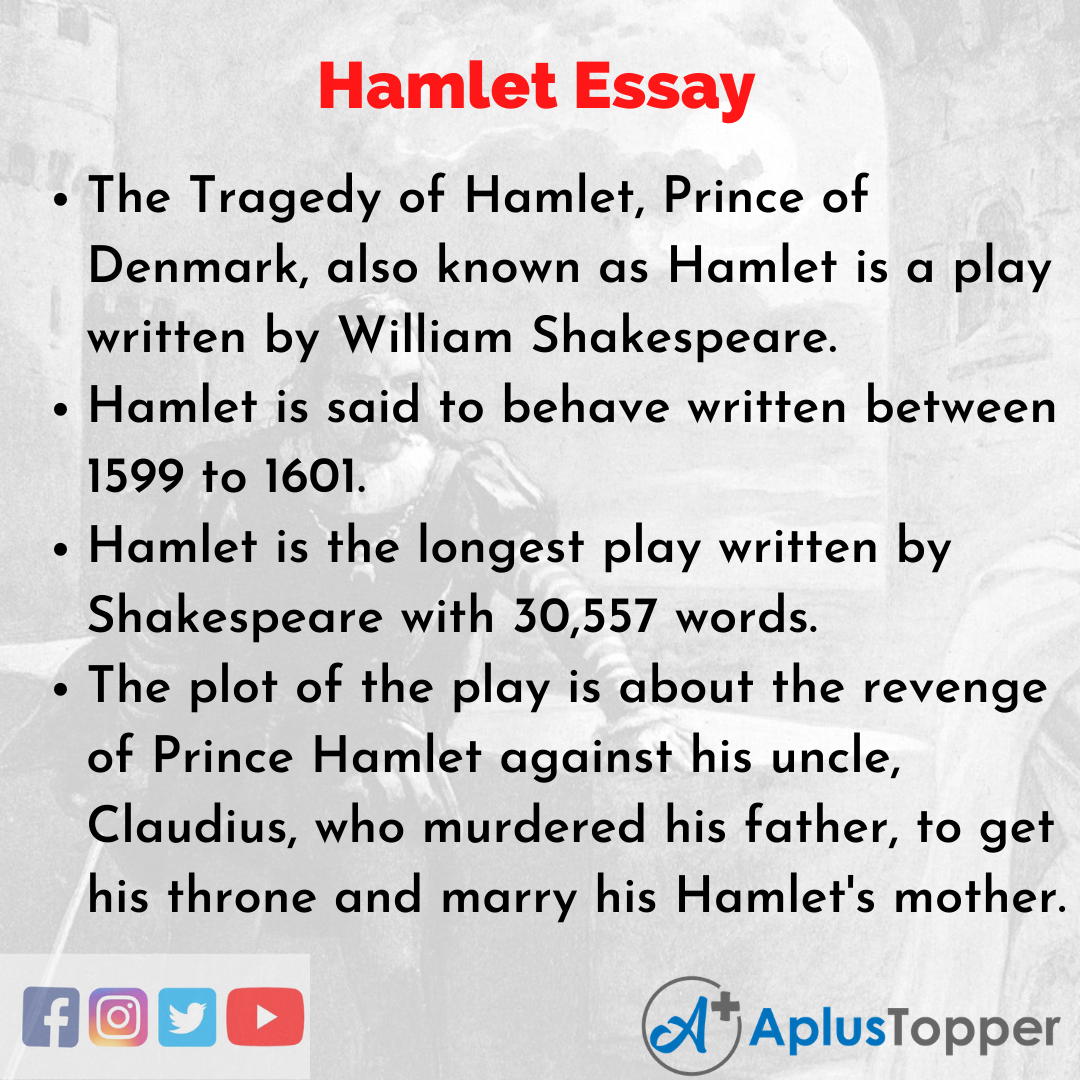 Hamlet is argued as one of the greatest tragedy pieces, which was written by William Shakespeare all through his life. The plot of the play disputes between a variety of dispositions all in the chase of power and their interruption of moral authority. It surrounds the theme of deceit, deceives and maliciousness to create the “perfect storm” of chaos, misuse and perhaps lunacy. The personality of the main character, Hamlet, the son of the old King Hamlet and the rightful inheritor of the throne, is the most perplexing element throughout the play.

Although Hamlet receives celestial affirmation that his uncle Claudius secretly assassinated his father, and spectates a hasty remarriage of his uncle to his mother, Hamlet remains unable to take any revenge on behalf of his father. Hamlet is based on a Latin Norse legend by Saxo Grammaticus around 1200 AD. There are sixteen books in total, which tells about the stories of the great rulers of Denmark.

10 Lines on Hamlet Essay in English

1. The Tragedy of Hamlet, Prince of Denmark, also known as Hamlet is a play written by William Shakespeare.
2. Hamlet is said to behave written between 1599 to 1601.
3. Hamlet is the longest play written by Shakespeare with 30,557 words.
4. The plot of the play is about the revenge of Prince Hamlet against his uncle, Claudius, who murdered his father, to get his throne and marry his Hamlet’s mother.
5. Hamlet is one of the most popular plays written by Shakespeare.
6. It is considered that Hamlet is the most influential and powerful works in the world of literature.
7. The performance of Hamlet topped the list of Royal Charles Dickens since 1879.
8. Hamlet is described as the world’s most filmed movie right after Cinderella.
9. The play has been performed many times over the 400 years since its inception by highly well-known actors in each successive century.
10. There are three versions of the play which are surviving known as the First Quarto, the Second Quarto and the First Follo. 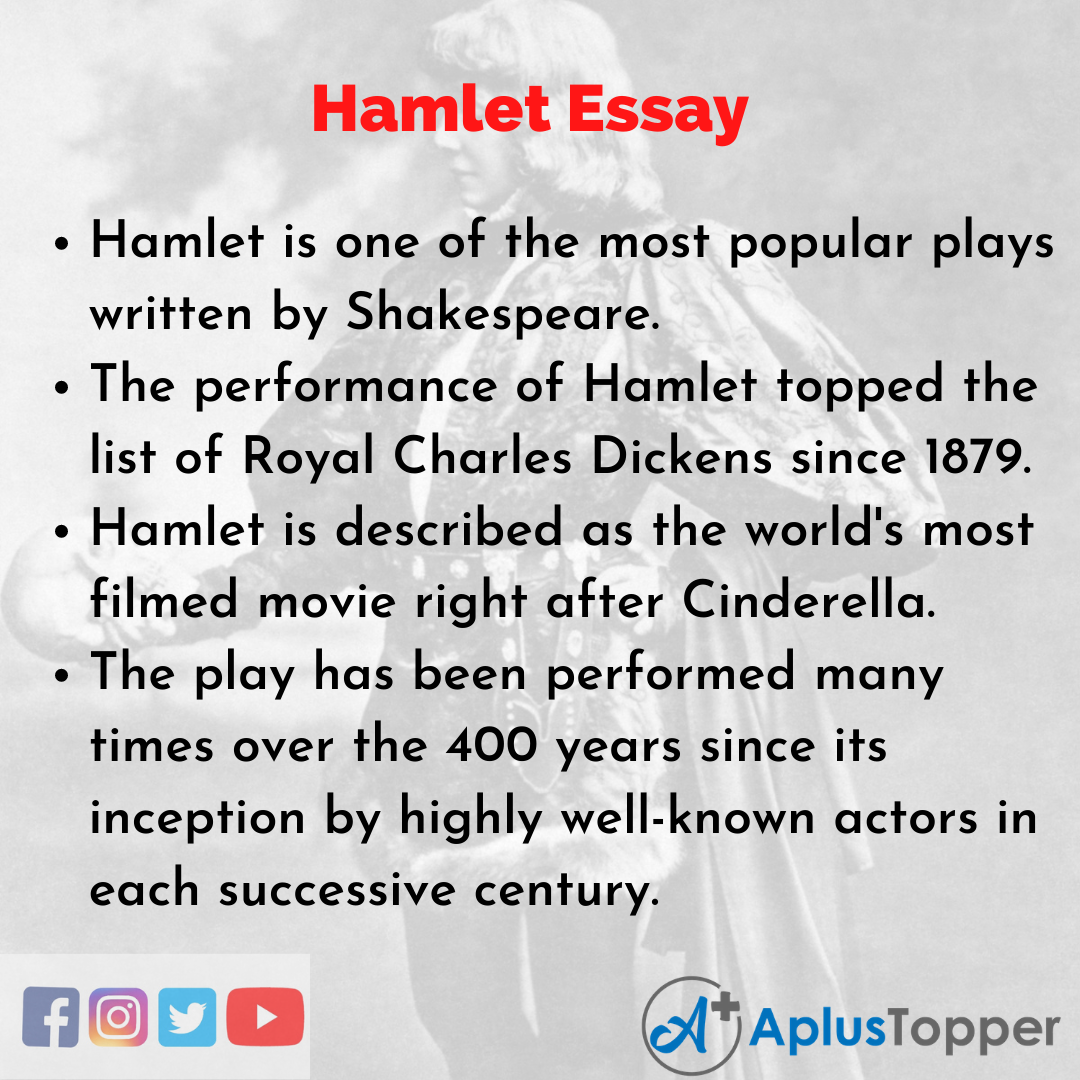 Question 1.
Which of the character has the most lines in the play Hamlet?

Answer:
The most lines, of any character in the play Hamlet, is the character Hamlet himself with 1569 lines.

Question 2.
When was the play Hamlet, first performed?

Answer:
The play was first performed in the year 1609.

Question 3.
What does the word Hamlet mean?

Answer:
The word Hamlet means small human settlement. A hamlet may also mean the size of a village, parish or a town.

Question 4.
Is Hamlet based on a true story?

Answer:
The characters in the play Hamlet are not based on real persons. But the story of Hamlet has been around the world for centuries.