Halloween Vocabulary: Halloween is an evening of festivity on October 31st. Canada And the United States are the major countries where it is most commonly adopted. Children suit colorful costumes and walk door to door saying, “Trick or treat!” to seek candy, which they receive.

Today, children are the ones who truly enjoy Halloween. The underlying concept of this occasion is to have a jolly good time, show colorful costumes, eat candy, and play games. Halloween vocabulary for kids will help you comprehend the essence of the holiday, and better prepare you for the festivities.

According to the location where you reside, you might know a great deal about Halloween or understand very little.

If you follow American television, you may well have witnessed programs in which individuals were costumed. Additionally, you may just have heard a few of these phrases in various albums or interactive media.

So there’s a good likelihood you’re acquainted with a bunch of these words related to Halloween, but surely not all of these. 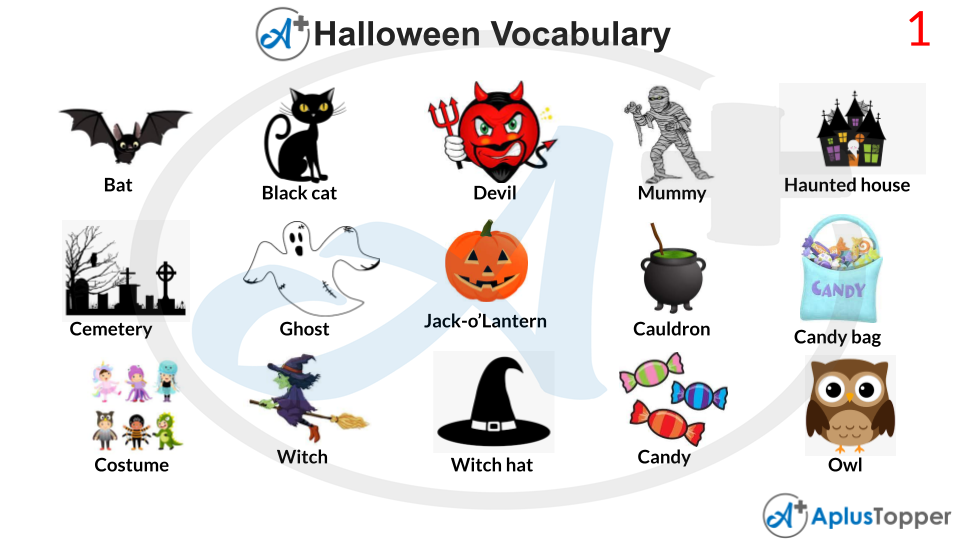 Description of the Halloween Vocabulary Words

The gloomy folklore of Halloween incorporated depictions of a winged monster wandering the night, gorging on the blood of unsuspecting victims while they dozed. Because bats are nocturnal, they may be identified with Halloween.

Decorations are any items arranged on full display to accentuate the party atmosphere.

Some people put up décor for Halloween celebrations or help their residence seem spooky when trick-or-treaters come by. Scary accessories, such as artificial spiderwebs, skulls, or Jack-o’-lanterns, could be incorporated.

Have you heard about this mythology previously?

Aside from that, black cats are directly synonymous with witches and witchcraft while also being a Halloween night emblem. Close-minded individuals previously believed that witches had the possibility to transform into cats.

A wizard is a witch’s male (boy or man) counterpart. In other terms, it’s a person endowed with supernatural abilities.

When used in a broader context, the phrase “devil” can substitute for “demon.” Angels are the complete antithesis of demons. They are malevolent beings who inhabit Hell or the afterlife, and they periodically torment the spirits of those who have departed.

Legend has it that Halloween is also regarded as All Hallows’ Eve. It is the evening preceding All Hallows’ Day or All Saints’ Day in the Church calendar.

Mummies are genuine, yet a Halloween mummy isn’t the same as an authentic one.

People in places like Egypt mummified their monarchs’ bodies before placing them in tombs, transforming them into mummies.

When something is haunted, it implies it is possessed by ghosts or spirits. A haunted house on Halloween, on the other contrary, is a little different in nature.

A group of individuals may also arrange a house to make it terrifying or creepy, then welcome guests to tour through it. While the guests are going through the haunted house, members of the haunted house may make a huge leap out to terrorize them.

A monster is a broad term used to refer to any frightening, uncommon, or massive creature or person. Frankenstein’s monster is arguably the single most well-known monster.

In addition to jack-o’lanterns, other lanterns are placed to decorate the houses and contribute to the aesthetic magnificence.

A cemetery is a spot where those who have deceased are laid to rest. This is a popular house décor concept that contributes to the spooky atmosphere of the day.

Some individuals consider that your human spirit or ghost lingers on Earth after you actually die. People may be troubled (scared) by ghosts and spirits.

Because everything you need is a large white bed cover with two eye slits, it could also be a very low-cost Halloween outfit!

It’s a pumpkin, of course, in reality. On Halloween night, the pumpkin, which is a famous and popular decor, features prominently. When you design a face into a pumpkin and insert a lit candle within, it illuminates. And now you have it: a Jack -o’Lantern.

A cauldron is a “big metal container with a lid and handles for cooking over an open flame.” One of the most well-known witches’ instruments is the cauldron. And it’s correct to conclude it’s the Witch’s tool of choice, right up there with the broomstick!

A Candy Bag is used to collect Halloween Sweets, Halloween Trinkets, Halloween Decorative items, and regular Trinkets in a comparable pattern to a small backpack.

A costume is analogous to a disguise, which is a cover-up that makes you appear to be someone else. Adults and children alike dress up in elaborate costumes for Halloween festivities.

Party guests may dress up as mummies, witches, vampires, and werewolves, or werewolves for Halloween! malicious, nasty, or ill-intentioned

Although there is a huge spectrum of costumes widely available, the traditional costumes connected with the Halloween celebration of Samhain continue to remain the most prominent.

Adults are most likely to purchase witch outfits, followed by vampires, skeletons, cats, as well as other creatures.

Many individuals used to dress up as spooky animals on Halloween in the distant past to ward off evil spirits. That tradition has progressed into current practices, such as wearing costumes as various species.

A witch is a lady who exhibits supernatural powers. A “normal” witch rides a broomstick and sports a long, tall black hat.

They’re typically associated with Halloween, and they’re a classic Halloween costume with a plethora of folk legend linked to them.

Death figures as a ‘person’ donning a black robe with a hood and clutching a sickle are prevalent in comics and films.

“The Grim Reaper” is yet another moniker for Death. The term “grim” alludes to anything somber or unpleasant. The word “reaper” originates from the verb “to reap,” which implies “to gather or harvest,” as a farmer does.

The Grim Reaper, on the other contrary, doesn’t really acquire food; he collects deceased people!

The Grim Reaper has featured in a number of movies and television series, as well as in novels and short stories.

A cemetery, commonly known as a graveyard, is a site where the deceased is buried.

A grave (sometimes known as a tomb) is a spot where a person’s body is put to rest. A “yard” is a vast, open natural place that is typically grassed.

Considering Halloween is really about supernatural phenomena, it’s no coincidence that a graveyard is among the holiday’s most well-known images.

A witch cap can be used as a piece of décor or as an element of your Halloween costume.

Around Halloween, candy is quite prevalent. When youngsters go trick-or-treating, they frequently procure a number of candies, which is really the chief cause why they attend. It’s also traditional to provide sweets such as candy corn or caramel apples during Halloween celebrations. Caramel apples, candy corn, skittles, M&Ms, as well as other Halloween candies are amongst the most loved.

One of the most traditional Halloween customs is to dress up in costumes. When youngsters go trick-or-treating, they should first dress up in a costume. They then walk to various residences in the community.

They ring the doorbell or at times knock on the door when they reach each residence. The youngsters all actually say, “Trick or treat!” whenever the homeowner answers the door. Then, the owner probably provides every kid a tiny piece of chocolate or sweets.

The owl is intertwined with Halloween in a multitude of ways, mostly as a familiar of witchcraft, wizards, and other supernatural entities, for their eerie night cries, for flying at night, and in principle as a night creature and predator. The owl’s shriek is said to resemble a witch’s laughter.

Even though we are increasingly analytical and much less superstitious nowadays, many people continue to believe that seeing or listening to a screech owl prefigures something unpleasant about to strike. For countless generations, the human skeleton has been linked with Halloween and Halloween décor, with the Celtic population viewing the skull as the abode of the mind and soul. The skull has long been acknowledged as a global image of impermanence, suffering, disaster, and destruction.

The skull is a common Halloween decoration since it functions as a grim reminder of human mortality and a clear symbol of humankind’s fear of the unknown.

Werewolf Halloween outfits continue to remain amongst the most prevalent options available for folks who fancy dressing order to celebrate the festivals. Getting dressed up as a monstrous werewolf, like Dracula costumes as well as other supernatural garments, does seem to have an undeniable fascination to a significant positive portion of the public.

Farmers utilize scarecrows to prevent crows out of their harvests because the birds devour the crops. To give the appearance of something of a humanoid, they use old clothing and straw for the hairdo.

It’s a symbol that represents the harvest component of Halloween.

A zombie is essentially a walking corpse (dead body) that has resurrected.

They can move very slowly or even very aggressively, but the majority of zombies like to devour humans and, at the very bare minimum, their brains!

This word is fairly similar across several languages and dialects, so you’ve presumably encountered it before.

Vampires live on forever. They bite the necks of the potential victims and suck their blood. If you are struck by a vampire, you would most inevitably turn into one as well.

Vampires may also transform into bats, which are a famous and popular Halloween emblem.

Vampires are legendary in many traditions, and there are a profusion of vampire-themed blockbusters, Television show, and books.

Count Dracula of Transylvania, in contemporary Romania, is the greatest well-known vampire folklore.

A tombstone is a piece of stone that indicates the position of a tomb or burial. The name of the deceased who is cremated, the dates of his or her life, as well as some type of personal message or other inscription, are typically incorporated.

A famous image of a witch wearing a medieval lace dress and wearing a dark hat while smirking villainously and holding a broomstick, enjoying Halloween is very common. The witch broomstick is an essential component of the celebrations, whether it is employed to impart extra oomph to our witch costume or just as interior decoration.

Artificially made spider webs are used as a common decorative item for Halloween.

A skeleton is made up of all the bones in a person’s body. You, therefore, have a skeleton, as well as muscles, organs, and skin and hair.

Skeletons are nothing more than bones. Since it is the skeleton of a deceased individual, the skeleton is one of Halloween’s motifs, which makes it eerie and appropriate for the occasion.

Spiders are hated and despised by many people. For Halloween décor, people frequently add artificial spiderwebs or spiders to add to the eerie feeling ambiance.