The greenhouse effect is considered a natural process that makes the earth’s surface warmer by absorbing the sun’s UV rays and keeping them in the earth’s atmosphere. Here are some essays on greenhouse effect and global warming with varying word length, which might help you in your exams.

We provide children and students with essay samples on a long essay of 500 words and a short essay of 150 words on the topic “Green House Effect and Global Warming” for reference. 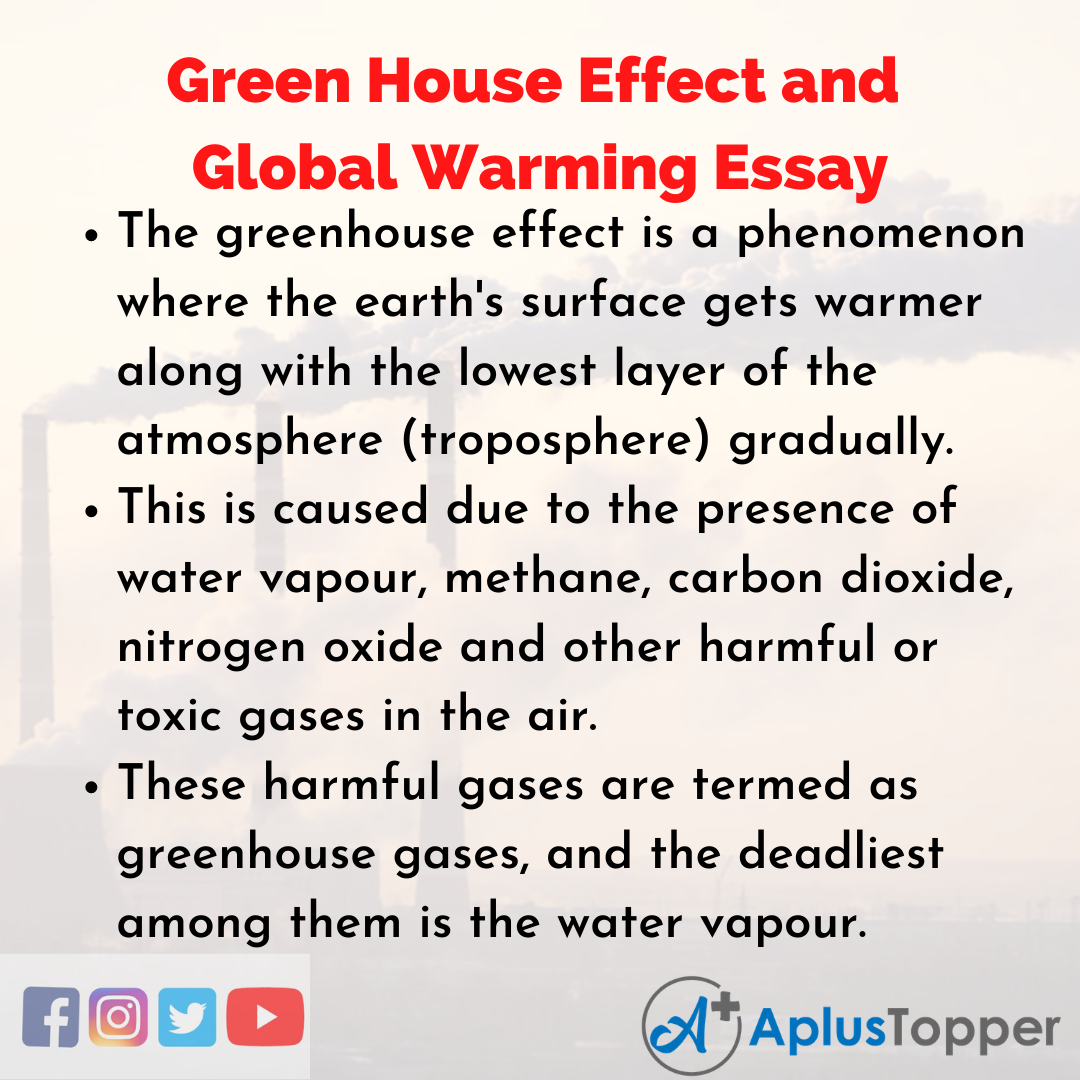 The greenhouse effect is a phenomenon where the earth’s surface gets warmer along with the lowest layer of the atmosphere (troposphere) gradually. This is caused due to the presence of water vapour, methane, carbon dioxide, nitrogen oxide and other harmful or toxic gases in the air. These harmful gases are termed as greenhouse gases, and the deadliest among them is the water vapour. Greenhouse gases trap heat and increase the earth’s temperature, which is known as global warming.

The greenhouse gases present in the earth’s surface are increasing gradually due to many human activities. Humans emit harmful gases into the atmosphere by various means such as automobiles, industries, burning of fossil fuel, etc. If these emissions are not controlled, then the greenhouse effect can harm the earth’s surface as well as the atmosphere very severely. It will become difficult for human beings to survive in the earth’s atmosphere because of the unimaginable heat.

People need to understand the importance of this matter and must take some steps to control it before it becomes uncontrollable. If some steps are not taken as soon as possible, then earth’s survival is at risk. There are many ways to stop global warming, and we just need to adopt it. It might not satisfy our needs, but we just have to adjust these little things for a better future. No one is safe if the temperature keeps on increasing every year due to global warming. 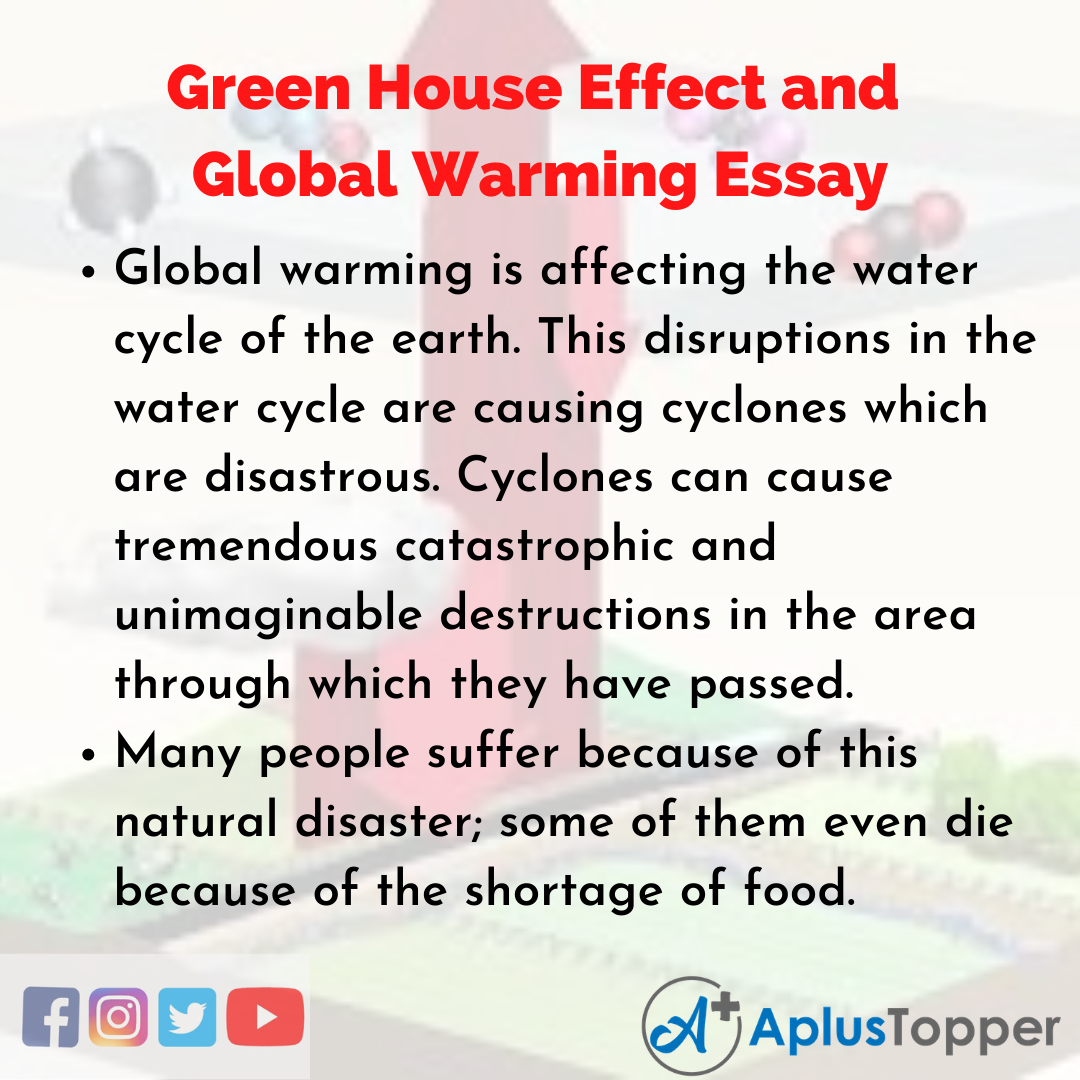 Long Essay on Green House Effect and Global Warming is usually given to classes 7, 8, 9, and 10.

As we can see and experience that earth’s temperature is increasing day by day. Every year the earth’s temperature is reaching new heights and breaking records. The sole reason for this increase in temperature is global warming which is caused due to air pollution. Air pollution occurs when the atmosphere around us is filled up with harmful gases which are otherwise known as greenhouse gases. These toxic gases pollute the air and are capable of putting risk on human lives.  The emission of such gases has increased in the last few years because of industrialization and many other related things.

Global warming is affecting the water cycle of the earth. This disruptions in the water cycle are causing cyclones which are disastrous. Cyclones can cause tremendous catastrophic and unimaginable destructions in the area through which they have passed. Many people suffer because of this natural disaster; some of them even die because of the shortage of food. Even if the government tries to secure and prevent them from all the challenges, they still have to go through a lot. The sole reason for this cyclones is the disruption of the water cycle which is caused due to global warming and greenhouse effect.

To have a secured future free of regular natural disasters, human beings have to take certain steps to stop air pollution, which will reduce the rate of global warming. Thus, with the decrease in global warming, the climate might get normal and stop experiencing some unwanted changes.

Every year we are experiencing more heat because of global warming, so it is scary to think about what will happen in the next few years. The main culprits of global warming are overpopulation, pollution and many human activities that exploit natural resources. However, if we are thinking specifically, then the only two reasons that are causing the temperature rise are global warming and greenhouse effect. This is the two phenomena which are fully responsible for the earth’s rising heat.

Due to rapid industrialization and overpopulation, greenhouse gas emissions have increased over the last few years. Thus as compared to previous years, more radiation is getting trapped by the atmosphere in the present day. This is causing an increase in temperature of the earth every year and on top of that every year it is breaking the previous year’s temperature record.

The greenhouse effect happens naturally, but the ones who boost this harmful phenomenon are human beings and their activities. Burning of fossil fuels is one of the main reasons for the greenhouse effect. Our industries and vehicles are entirely dependants on fossil fuels, and that is causing the emission of harmful gases into the atmosphere. Harmful gases like carbon dioxide, carbon monoxide, methane, nitrogen oxide, sulfides, etc., are getting accumulated in the atmosphere because of fossil fuel burning. Human beings need to find some alternative ways to use different things without fossil fuels such as we can drive cars which have CNG in it. It’s time that everybody steps up and takes some steps to stop global warming and greenhouse effect or else a bad and horrible future s waiting for us, which we definitely don’t want to experience.

Even after so many proofs people still don’t believe that we are in danger, and this is the attitude which will cost them their lives. Certain actions are to be taken immediately so that we can put a hold on the increasing temperature. Then we can try to bring it back to normal with many activities such as afforestation, using CNG, and filtration of industrial gases. All these activities are proved to be effective so, and it is advisable to all to start their journey of saving the environment as soon as possible.