Global Warming and Greenhouse Gas emission Essay: Global Warming and greenhouse effect are the worst effects due to the worldwide pollution of various types. Greenhouse gas emission and effect is experienced globally by everyone in a slight amount. There are several severe impacts of global warming and greenhouse gas emission that affects the entire World. Melting of glaciers, loss of wildlife, forest fires, and much more are caused due to the effects of global warming. Furthermore, the global temperature is also rising rapidly, leading to the unbearable climatic conditions in many parts of the World.

This article contains the best Global Warming and Greenhouse Gas emission Essay for the students of all age groups. Students can use these for various purposes, depending on their needs. There are 300 words, 500 words, and 700 words essays for meeting the people’s multiple requirements.

We provide children and students with essay samples on a long essay of 500 words and a short essay of 250 words on the topic “Global Warming and Greenhouse Gas emission” for reference.

Short Essay on Global Warming and Greenhouse Gas emission is usually given to classes 1, 2, 3, 4, 5, and 6.

Urbanization, industrialization, and population explosion, along with various other causes, have to lead to the accumulation of poisonous greenhouse gases in the atmosphere. The harmful and toxic greenhouse gases have different negative impacts on the entire ecosystem, including the oceans, forests, wildlife, and human lives. The greenhouse gases also affect the whole water cycle and create unpredictable and unbearable climate conditions with hotter temperatures, known as Global Warming. There are several severe impacts of greenhouse gas emissions and Global Warming on the Entire Earth. One of the significant issues rising with them is the unpredictability of the oceanic currents. In the longer run, this causes severe damages due to unforeseen occurrences of storms, floods, cyclones, and other disasters.

Emission of greenhouse gases and global warming not only affects human beings and their properties, but the increased pollution of various types also affect the land and aquatic animal in negative ways. One of the significant effects of Global Warming is melting of glaciers; due to this, the polar bears are depriving of their living area, and thus are on the verge of extinction. Not only have these, but the dumping of waste and garbage here and improper management also led to the poisoning of animals and humans, thus risking their lives due to the spread of fatal diseases.

Greenhouse gas emission needs control that is only possible by lowering the usage of items that release CFCs and reducing various kinds of pollution. Furthermore, Global Warming is a more significant challenge that needs proper attention from all across the Worlds’ communities. All the nations must come forward to address the problem at hand and the possible solutions to prevent or stop it from destroying the entire Earth. And one of the best ways to control this issue is by using natural energy as a power source, using solar panels, wind energy, and other such ways. 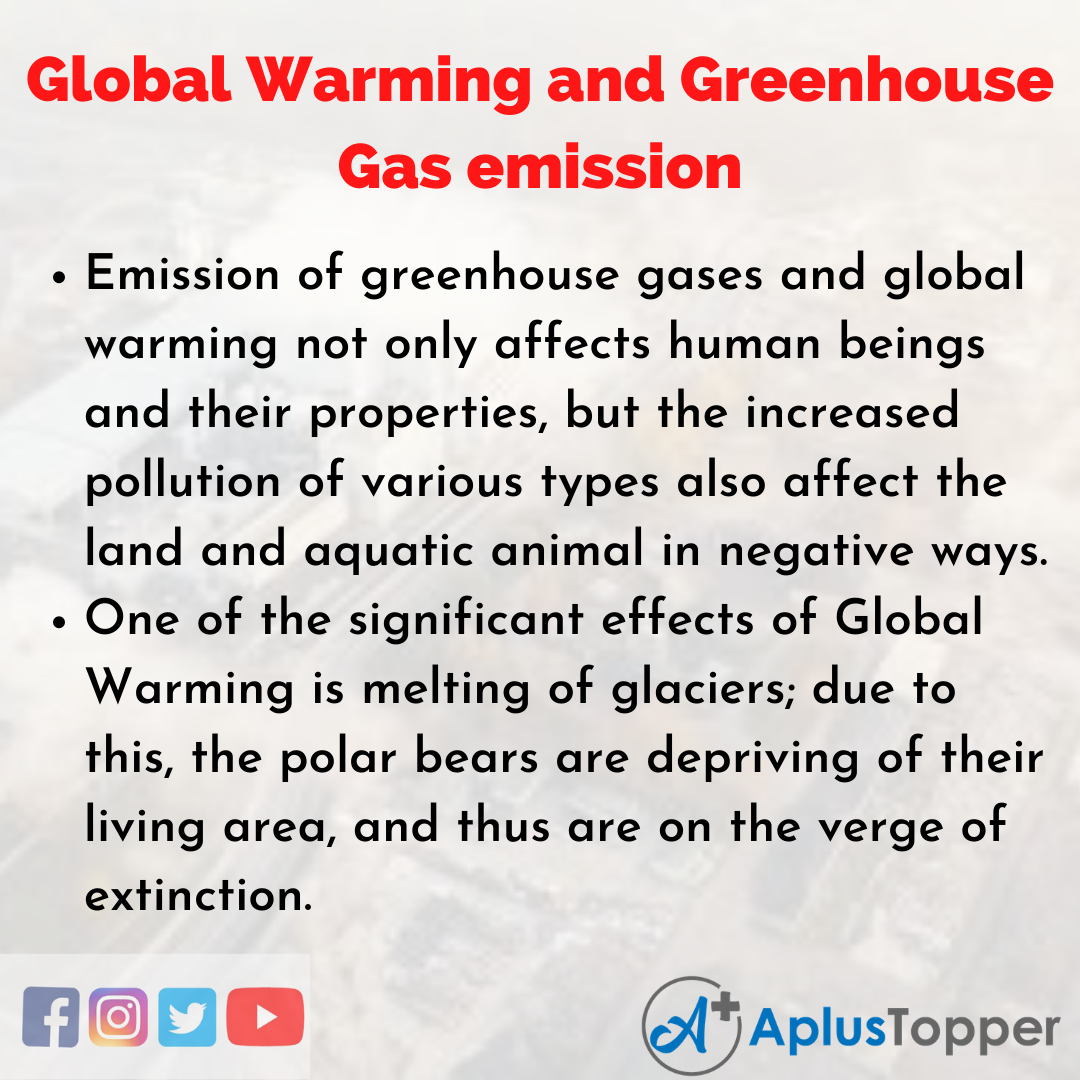 Long Essay on Global Warming and Greenhouse Gas emission is usually given to classes 7, 8, 9, and 10.

Forest fires, ice caps and glacier melting, earthquakes, other disasters, and rise in the average temperature across the Globe. These are the adverse effects of global warming, climate change, and greenhouse gas emission. Not only are these, but the recent effects like the excessive number of bird deaths across the World in 2020 also the impact of these issues. And what we are currently witnessing is just the starting, as there is a lot more to come and we have a lot more to witness if the current situation goes on and the emission of greenhouse gases and global Warming continues with the same rate.

Due to the irresponsible way of using the natural resources, improper waste management, and excessive and irrelevant burning of fossil fuels coming from several vehicles, factories, and burning forests and crops lead to the production of an excessive amount of carbon dioxide, hydrogen, nitrogen, methane, and other harmful greenhouse gases in the atmosphere. This is rapidly increasing with each passing day across the World. This entire scenario also adversely affects the water cycle and leads to several issues like glacier melting, poisoning of water bodies, acid rains, and others fatal for both humans and the animals.

As everyone is aware of the importance of water cycle, water resources, forests, animals, and other environmental elements for the best survival of the humans on the Earth. However, due to industrialisation, globalisation, and wrong usage of the natural resources, the entire scenario of the water cycle’s functioning is getting adversely affected. This leads to floods, droughts, and other unpredictable disasters and natural calamities, including cyclones, and others. The present scenario is still not the verge of what we still have to witness due to greenhouse gas emissions and Global Warming. Already we know how the extent of natural disasters are rising with each day, and with the current growth and rate of the causes, soon we might get to the verge where even our survival would become extremely difficult on Earth.

Global Warming and greenhouse gas emission not only affects land life, but it also leaves a negative impact on aquatic life. Scientists also unveiled that with the increase in the average temperature of the Earth, the sea and oceans’ oxygen level is declining, as a result of which the survival of aquatic organisms is becoming more challenging. Not only have this, but even some species reached the verge of extinction only because of the harmful and fatal risks of global warming and greenhouse gas emissions.

Global Warming is just a severely harmful aspect of climatic change. It has many causes and effects, and these are uncountable ones. In our daily lives, we come across the news of the extinction of species, glacier melting, water shortage, scanty or scarce rainfall, loss of life and property, and whatnot. Furthermore, global warming and the greenhouse effect are the major issues that need precise focus. All the nations from across the Globe must come forward to fight against the problem and sustainably use all the resource while safeguarding the environment. It is necessary to take the precautionary measures as soon as possible to maintain the existence of life on Earth and let it remain an ideal place for the survival of various species.

Global Warming stands for the rise in the average temperature of the Earth, air, and oceans, leading to the difficulty in the survival of various species and the emergence of several natural calamities. The situation is rising rapidly since the mid 20th century and is continuing at a tremendous rate without any control and stoppage. The effect is mainly caused due to building up of the harmful greenhouse gases in the atmosphere. The most dangerous greenhouse gas is CO2, and the emission of it is increasing tremendously and has risen 120-fold in the last 140 years. However, in the 19th century, greenhouse gas emissions were mostly because of forest fires, deforestation, and other lithosphere changes, but is now predominantly due to the burning of fossil fuels.

The rise in global temperature, Global Warming, has the significant reason behind it as the greenhouse effect and emission of greenhouse gases like Hydrogen, Carbon dioxide, methane, nitrogen, and other fatal ones. These gases act in the atmosphere to trap the heat coming from the sun. Without the presence of these gases, the heat travels back and leaves the Earth’s surface, but now that isn’t easy due to the entire phenomenon of the greenhouse effect and thus leading to the global Warming. CO2 is the most harmful greenhouse gas that is present in the highest ratio around us.

Even though the greenhouse effect is essential to ensure the survival of various species on the Earth by providing it with the proper amount of warmth and heat, but, as this effect becomes more robust and the Earth gets warmer, that is also a fatal issue for the survival of various species. And the glacier melting is one of the causes of greenhouse gas emission, leading to Global Warming, and thus the loss of living area for polar bears. This scenario does not just stop here, and the rate of the emission of greenhouse gases is expected to rise even more in the coming time.

Global Warming is a severe effect that has many sever effects, and some of its products are yet to be found by the experts. It hinders the growth and development of all the species and all the nations and leads to some severe loss of lives and properties. The rise in global temperature also leads to the worsened climate and weather situations. As a result of global warming and greenhouse gas emission, glaciers are retreating at a tremendous rate, and the mountains’ entire environment is changing. This is bringing a change in the whole habitat and also an increase in the seawater levels. Sea level has globally risen from 180 ml to 590 ml. This is a rising risk as with this rate, the sea and oceans will soon engulf a significant part of the land.

With global Warming, weather conditions are becoming extreme. The areas without any history of floods or draughts are now witnessing the same in the current years due to global warming and greenhouse gas emissions. Thunderstorms and cyclones are also becoming very common across various parts of the country. Winters are also getting shorter and the period for summer is rapidly increasing with each passing year.

Emission of greenhouse gases and global Warming is also leaving adverse effects on vegetation. Several species are on the verge of extinction on land as well as on oceans. Lately, the number of diseases and disorders is also increasing, and more fatal ones are emerging. This is mainly because more variants of the viruses and bacteria survive for a larger span as they grow better in the extreme temperature with higher humidity. Furthermore, with the global Warming and disturbed water cycle, the humidity level is rising, resulting in better survival conditions for mosquitoes and the risks of more diseases.

Not only these, global warming and greenhouse gas emission have many other adverse effects on the entire Earth, like the change in the disease spreads and agricultural yields, reduced summers and higher humidity, added trade routes, the reduced ozone layer, and others. As the ozone layer is depleting, it is also adding to the emergence of some extreme and fatal effects on the humans and birth of babies with severe disorders as it is unable to stop the harmful radiations of the sun from entering into the Earth’s surface and contacting the people around. 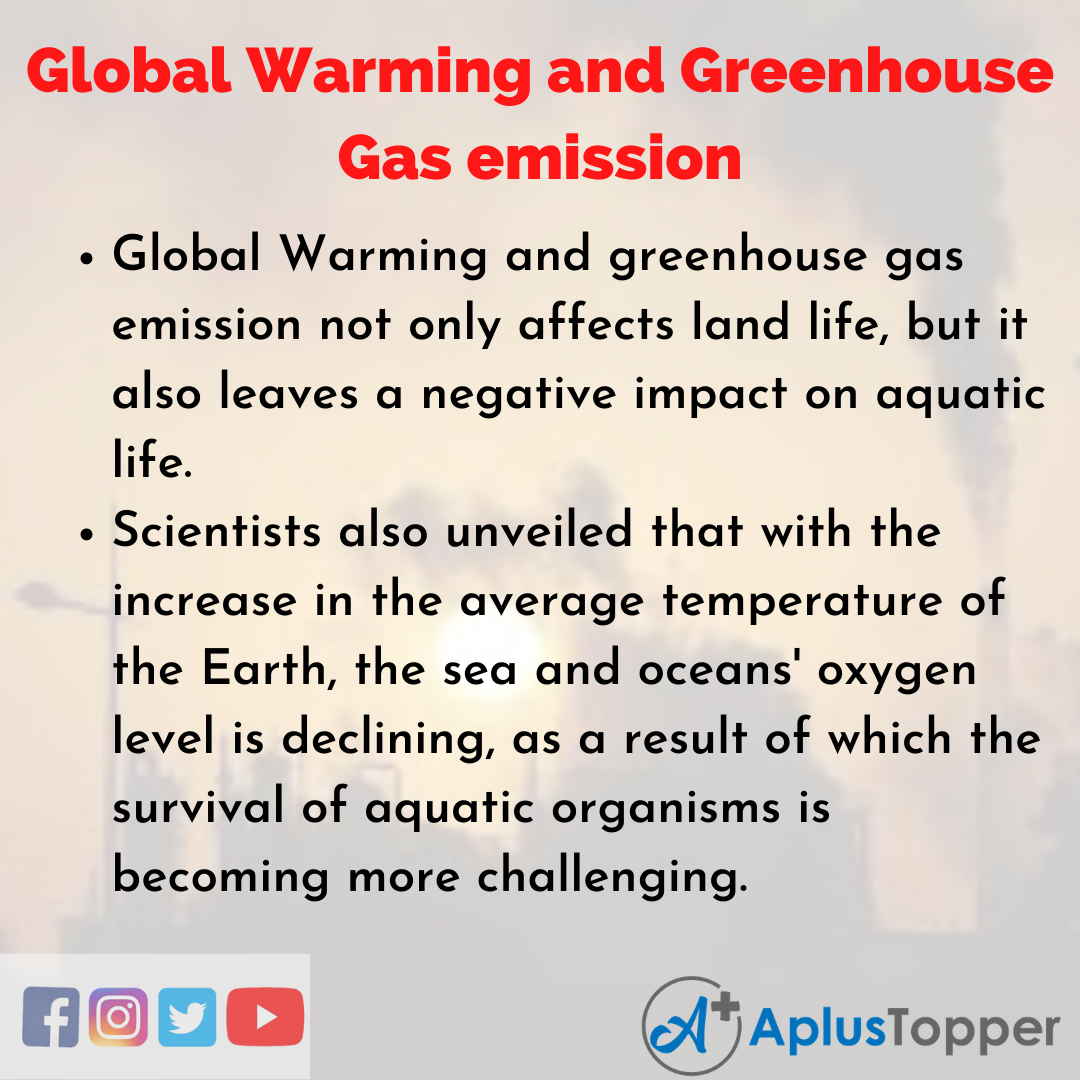 The Global Warming and greenhouse gas emission essay is essential to help the people be aware of the effects and ensure awareness among their groups and companions. It is necessary for the students of all the age groups and is an important content that focuses on the adverse effects on the Earth and why it needs a stop.