Generation Gap Essay: Generation Gap is a term, which is given to the gap between two generations; the younger generation and their elders, especially between children and their parents. Everything is affected with the change of time the age, the culture, mannerism, morality etc. It is a fact that this difference affects everyone.

Below we have given a long essay on Generation Gap of 500 words is helpful for classes 7, 8, 9 and 10 and Competitive Exam Aspirants. This long essay on the topic is suitable for students of class 7 to class 10, and also for competitive exam aspirants.

Generation gap is an everlasting social phenomenon. Every generation lives at a certain time under certain condition. So, different generations have their own system of values and views. And every side wants to uphold the principles they believe in.

We can find a lot of examples in literature such as ‘Fathers and Sons’ novel by Ivan Turgenev and ‘Woe from Wit’ by Alexander Griboyedov or taking other set of examples of popular movies like ‘Baghban’, ‘Ek Rishta’ etc. This problem has remained unresolved throughout ages.

The gap between the old people and the young is called generation gap. It is the difference in attitude or lack of understanding between younger and older generation. This generation gap has always been there, but these days it has reached an explosive stage. The values and patterns of life have changed to a great extent. Today, everybody likes to live and behave in his own way. This attitude has enlarged the generation gap, which is becoming wider day by day.

It is now disrupting the family life completely. The elders look after the children and make all sorts of sacrifices to bring them up. Parents want children to follow their instructions as they believe it is for the benefit of children and would do them good. On the other hand, children face immense pressure of exams and cut-throat competition, and think that parents know nothing about the demands of this fast paced world. In the end, despite love and affection for each other, both are drained of energy and are unable to comprehend the other. Consequently, there is lack of communication between the two, that with time, develops into a larger rift. George Orwell, a famous novelist quotes

Elaboration to this quote is that one generation believes the following generation is missing essential values and belief, and is becoming less productive over time. Psychologists believe that most young people experience conflict during their adolescence. They are neither children anymore nor yet adults, but individuals, who are desperately searching for self-identity. As they grow up, they adopt values that differ from those held by their parents and develop an unfavourable attitude towards the adult world.

In earlier times, two or three generations lived in the same lifestyle and environment as the development was very slow. But today, nearest past is very much outdated and the world is more advanced each day. Parents do not even know many of the modern technologies and equipment children use. Conflicts actually arise because young people feel that they have a right to be independent. They look at parents as ‘enemies’ who do not let them live the way they want like by staying out late, wearing fashionable clothes or choosing their own friends. What makes things even worse is that teenagers suffer a sense of incapability and rage as they realise that financially they still depend on their parents.

Unlike West, in India, this problem is yet in the initial stages, but the gap has appeared and it is going to grow bigger day by day. “If you want happiness for a lifetime help the next generation”, says a Chinese proverb. So, it is not only the responsibility of the younger generation, but also of the elders to fill this gap with their love, affection and trust. The problem, in fact, has grown and intensified due to rise in complexities of modern life.

These complexities have arisen in the wake of modernism as faster industrialisation with increasing population has led to greater competition. The problem arises when parents begin to take things too seriously and forget that as children they had themselves loved adventure and freedom. On the other hand, children too are in the blind race of enjoying life and following their friends. 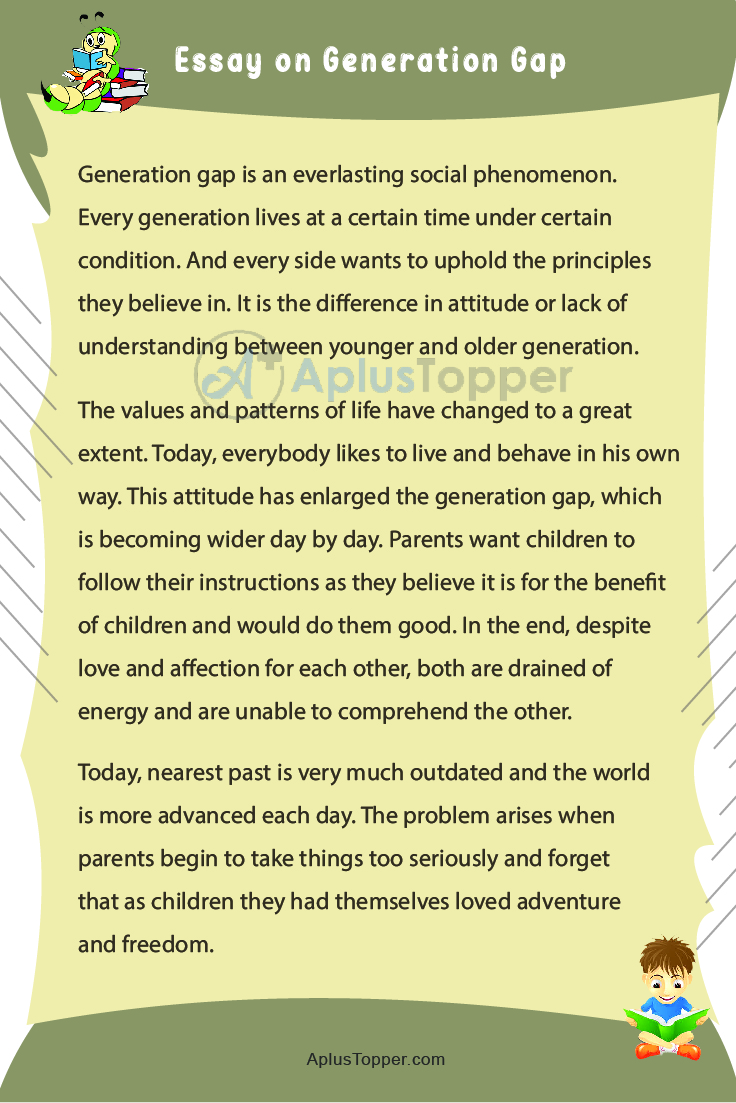 Below we have given a short essay on Generation Gap is for Classes 1, 2, 3, 4, 5, and 6. This short essay on the topic is suitable for students of class 6 and below.

Whether, it is health, political, social or cultural issues, it seems the older generation always forgets they were disobedient and rebellious too, in their youth. History is a proof which shows that time and again, modern thought process of the youth has brought a revolutionary change in society. This change has primarily helped the growth of human race altogether. In India’s context, they include abolition of Sati System, equality of sexes, rising above the shackles of caste system, among many others.

Evidently, grandparents can play a constructive role in order to bridge the gap of thought, attitude and approaches to life. Generation gap would not be that serious a problem if families learn to sit over dinner and amicably settle things by ironing out differences and sharing experiences. When this communication barrier is transcended and the ice broken, the problem does not remain that serious anymore. Talking it out calmly and coolly, with the idea of sorting things out, changing for each other and changing for better can be the most helpful instrument in bridging the generation gap.

Family outings, vacations, tours, picnic-outings could be effective ways to initiate intimacy between parents and children. Watching movies and discussing them, putting forth different viewpoints can be a beginning to inculcate the habit of a healthy dialogue between members of the family. Such small things and steps can do wonders in initiating a healthy family atmosphere and reducing friction between two generations that are both right from their perspectives. Their only folly is that they are viewing the same thing from opposite directions. Age, time and experience or the lack of it, forces them to do so.