Essay on Gandhi Jayanti in 200 words or 300 words or 400 words or 500 words is available in the article to satisfy the various needs of the students and children of different classes. These are essential subject matters for the learning purpose. They are also helpful for the students to provide them with a perfect material for essay generation, speech creation on Gandhi Jayanti, preparing status and posts, and other purposes.

Gandhi Jayanti is a national festival celebrated across India on 2nd October, every year. It is the birth anniversary of Mahatma Gandhi, also known as Gandhi Ji and the Father of the nation. The occasion is celebrated in various ways across the country to honour the Father of the nation as a national holiday. Full name of Gandhi Ji was Mohan das Karamchand Gandhi, and people nicknamed him Bapu. Various institutes and organisations also hold pre celebrations on the day by hosting some events, including charities and donations in honour of Gandhi Ji.

UN General Assembly declared 2nd October as International non-violence day too on 15th June 2007. This is because of Gandhi Ji preached non-violence and fought for Independence while walking the way throughout his life. Currently, the nationwide folks remember Gandhi Ji as the symbol of Truth and peace. As Gandhi Jayanti is a national holiday, all the private and Government organisations stay closed for the day, except for holding any celebration or event.

Gandhi Ji presented a fantastic example of a simpler life with higher opinions for future generations. He also opposed smoking and drinking always, which is why on Gandhi Jayanti there is a dry day, and the Indian Government has banned the sale of liquor for the day. He was also a patriotic leader who laid the non-violence movement for the Indian Independence from British rule.

Gandhi Jayanti is celebrated all across India on 2nd October as a third crucial national program every year. It is the birth anniversary of Mahatma Gandhi, also known as Gandhi Ji, Bapu, and Father of the nation. The day is the national holiday to honour Mohandas Karamchand Gandhi (Gandhi Ji). He was a patriotic leader, and he was also the leader of the nation during the struggle for Independence while walking the path of non-violence throughout the independence movement. According to Gandhi Ji, Truth and non-violence are the only two weapons to win the freedom struggle and get Independence from British rule. He also believed in social equality always and was also against untouchability.

Government officials celebrate Gandhi Jayanti in New Delhi with more special preparations in Gandhi Ji’s Samadhi (Rajghat). The Rajghat tomb is decorated with hundreds of flowers, and in the morning, there is also a prayer on Mars in the religious mind. School and university students and children from all across the nation also celebrated the special occasion by holding some special events to honour Gandhi Ji.

Based on the participation of several events and celebration activities like drama, poetry, singing, speech, essay competitions, charity and donation events, and others based on the life and struggle of Mahatma Gandhi and his work for the nation, students successfully celebrate the occasion and then distribute the prize to the winners. In memory of Mahatma Gandhi, on Gandhi Jayanti people play his favourite song “Raghupati Raghav raja ram” on loop and students also sing the song during celebrations. Finally, the overall best performers of the events get prize and rewards.

Gandhi Ji was a motivating and exemplary person for most prominent political leaders who used to come to him to take various advice pieces. He is also the ideal of the nation’s youth. Not only among the Indians, many prominent foreign leaders like Martin Luther King, James Lawson, and Nelson Mandela also followed Gandhi Ji’s non-violence and independence movement. 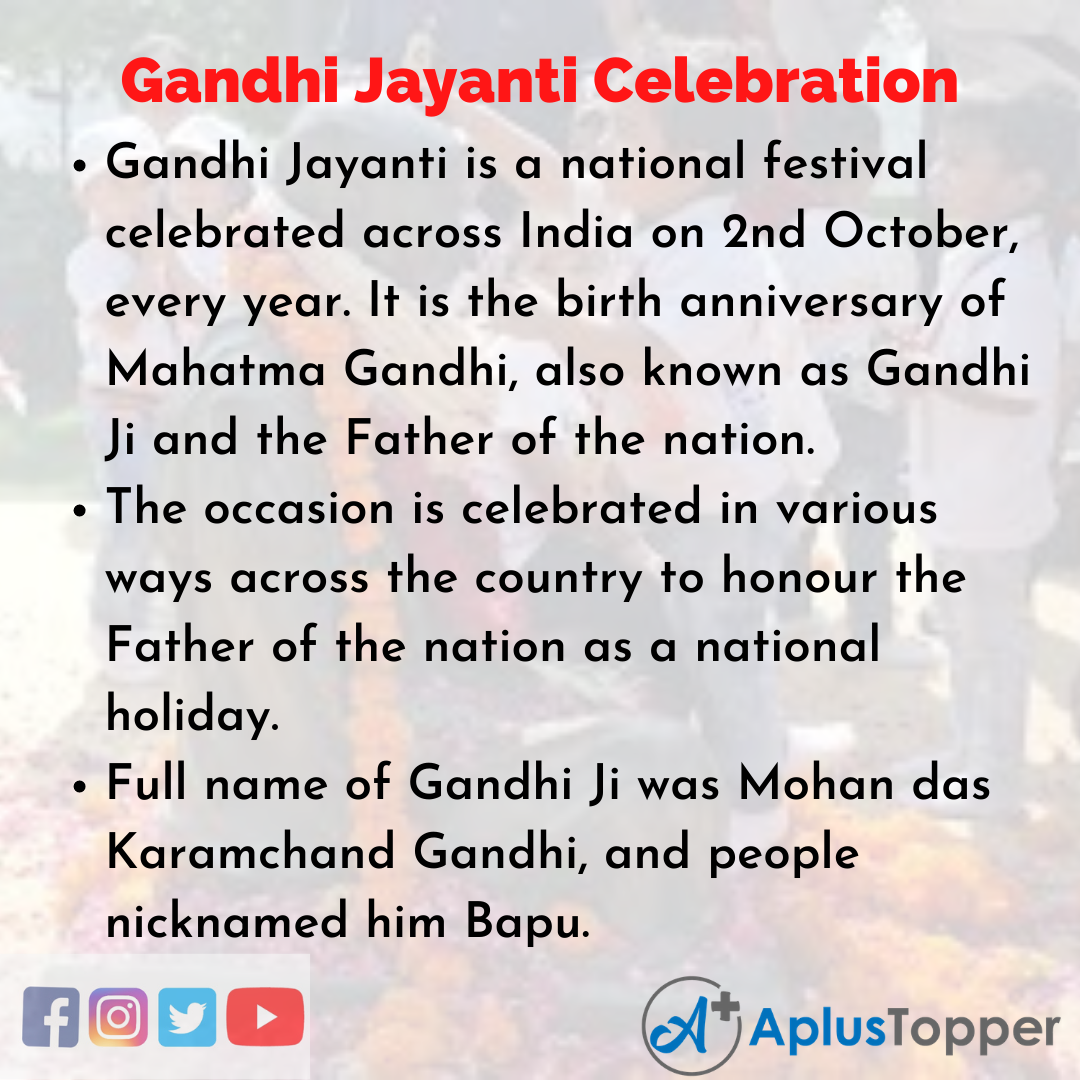 Long Essay on Gandhi Jayanti Celebration is usually given to classes 7, 8, 9, and 10.

On the occasion of Gandhi Jayanti, schools get fulfilled with lots of enthusiasm. Children appear wearing white dhotis and round glasses and holding a stick on the one hand to mimic Gandhi Ji. It is a very prideful moment, seeing the children honouring Gandhi Ji, saying famous quotes on him, delivering speeches on him, and participating in drama and acts to depict his story. Events start with teachers or higher authorities praying in front of the big garland of Gandhi Ji with smouldering incense sticks and then distributing sweets among the students.

In the offices, people celebrate the occasion of Gandhi Jayanti mostly like that in the schools. Furthermore, the office goers also take some time to deliver their views on Bapu. Finally, everyone then acknowledges him that without his guidance freedom from British rule might not have been possible so soon for India.

In New Delhi, India, there is a memorial dedicated to Gandhi Ji, famous as ‘Rajghat’. On the occasion of Gandhi Jayanti, the President, PM, senior cabinet ministers, and several other leaders of ruling and opposition parties visit Rajghat in the morning and pay floral tributes to Gandhi Ji. All the ministers also sit and observe silence to recall all the struggle and pain of Bapu for the nation’s freedom. They also vow always to follow Gandhi Ji’s path of Non-violence and Truth.

Mahatma Gandhi was a famous Indian freedom fighter and political leader whose calls were heard sincerely and deeply by the nationwide citizens. People from all the castes, religions, demographics, and financial status follow his words. Mahatma Gandhi’s leadership was highly impressive because it could unite people from different categories and diversities. Therefore, celebrating Gandhi Jayanti is not only an event in memory of Gandhi Ji, but it is also celebrated as the occasion that brings realisation on us that we all are brothers and sisters and must stay in harmony and peace. All the nationwide people might have some linguistic and cultural differences, but we all are still the children of motherland India and must stay united.

Born in India under British rule, Mohandas Karamchand Gandhi (Mahatma Gandhi) was undoubtedly the most prominent individual during India’s Independence struggle. He was referred to as Bapu or the Father of the nation due to his significant efforts for the country’s Independence. Gandhi Ji’s family was a merchant class one, and he was a very confident person who went to South Africa at the age of 24 for pursuing law studies. Further, he returned from the country in 1915 and then became the member of Indian National Congress (INC). Due to all his hard work, he soon became the president of INC.

None of the efforts of Mahatma Gandhi was restricted only to Independence. He fought various kinds of evils, including social differences like casteism, untouchability, etc. Moreover, he also made many efforts for helping the needy and poor of Indian society.

Mahatma Gandhi intensely disliked the British rule for India and was a strong opponent for it. However, he was also not in favour of violence for seeking Independence. Gandhi Ji strictly believed in the philosophy of Ahimsa (non-violence). He consequently stood against the British rule and fought peacefully to gain freedom for India. All the peaceful protests and movements, methods and plans of Gandhi Ji were very effective. And only due to the higher effectiveness, Mahatma Gandhi became an inspiration for India and the entire World. This is a significant reason why Gandhi Jayanti is globally celebrated in various ways. His birthday thus became an occasion of remembrance.

Gandhi Jayanti in India is celebrated as a grand commemoration of Mahatma Gandhi and is also a national holiday for the country. This patriotic occasion is held in all the states and union territories across several schools and offices. People start the celebration by paying tributes to Mahatma Gandhi and having prayers for him. As his favourite song was ‘Raghupati Raghav raja ram’, it is also played in the background. On the occasion of Gandhi Jayanti, several prayer meetings and commemorative ceremonies are hosted across India, in the private and governmental organisations.

People also celebrate the occasion by hosting several competitions, including painting, essay writing, drama, etc. Further, the best performers get rewards and prizes for winning the competitions. Students across India also indulge for watching the documentaries and performances on the life of Bapu. Furthermore, there are promotions of Truth and non-violence, and people also hold charity and donation events to raise money and uplift the status of poor and needy. On Rajghat, Gandhi Ji’s memorial in New Delhi, president and Prime minister with several cabinet ministers gather to hold prayers and pay tribute to Gandhi Ji. Finally, as he was against smoking and drinking, 2nd October is also regarded as a dry day in the nation, and there is no sale of liquor. 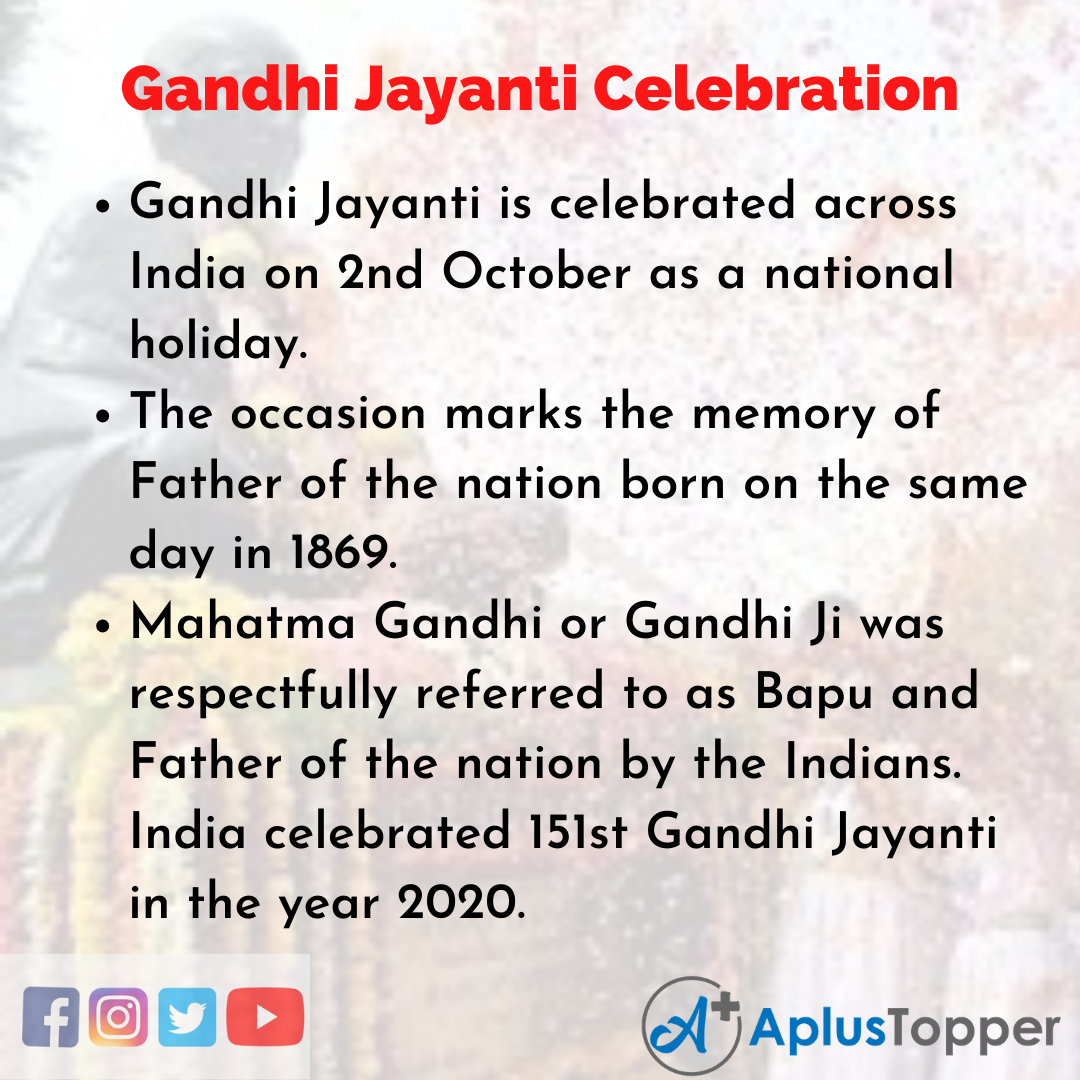 Gandhi Jayanti is a national festival in honour of the great personality, Mahatma Gandhi, of India. He fought bravely and peacefully for the Independence of the country. The occasion is also celebrated globally as International non-violence day, as Gandhi Ji was a motivational personality for many other foreign nations’ leaders. The day is celebrated to reflect and cherish the life and memories of Gandhi Ji.

The article has four essays, and each essay on Gandhi Jayanti celebration contains several facts related to the day and the famous personality on whose honour the festival occurs. The day is also a national holiday for India, and all the organisations and institutes stay close on the day apart from the ones holding any celebration. Gandhi Jayanti celebration occurs nationwide in various manners, and most of the activities during the events revolves around the main agenda of Mahatma Gandhi, his life, and motivation drawn from his struggles and acts.