Revolutions are a sudden change of the ideals of a country or system of governance of an organization which are caused by mass oppression and revolts. These revolutions are a result of mass participation. Revolutions may or may not be successful in its cause, but it does bring a change in the civilized mindset.

We are providing a long essay on the French Revolutionof 500 words and a short essay of 150 words on the same topic along with ten lines about the topic to help readers.

Long Essay on French Revolution Essay is usually given to classes 7, 8, 9, and 10.

The French government was accused of spending too much on wars, armaments and lavish lifestyles caring little for the poor and poverty-stricken countrymen. The ongoing destructive economic recession of the time contributed to more reasons, such as agricultural, trading and manufacturing decline. This led to more unemployment and poverty in the country. The French revolution was a horrifying event that overthrew the monarchy and created political chaos.

Soon the national assembly wrote, “ Declarations of the Rights of Man and Citizens”. This was written to make the first and second estate realize that the basic human rights enjoyed only by them is meant for all. This declaration played a major role in the French revolution. This successfully granted all men, equal rights and abolished aristocratic privileges. This was the idea of early philosophers called the Enlightenment.

In 1791, a constitution was set up in France, marking the success of the French revolution. All men were granted equal rights, and the class conflicts were reduced. This change led to the rational collapse of the absolute French monarchy as the lower class were beginning to have more power than before. By 1792, France was a democratic republic.

Although the French revolution was a success in achieving rights and powers, it failed in achieving aristocratic privileges in the first half of the revolution. This revolt against the ruler led to massacres of 1792 that went up to five days, killing of many prisoners of Paris and the lower-class countrymen. This massacre was brought into force by the aristocratic privileged. The French revolution failed to gain power over the high-class society. The National assembly also sentenced 20-40 thousand common people to death, to prevent counter-revolution and enemies. The French Revolution ended in 1799 with Napoleon coming into power. 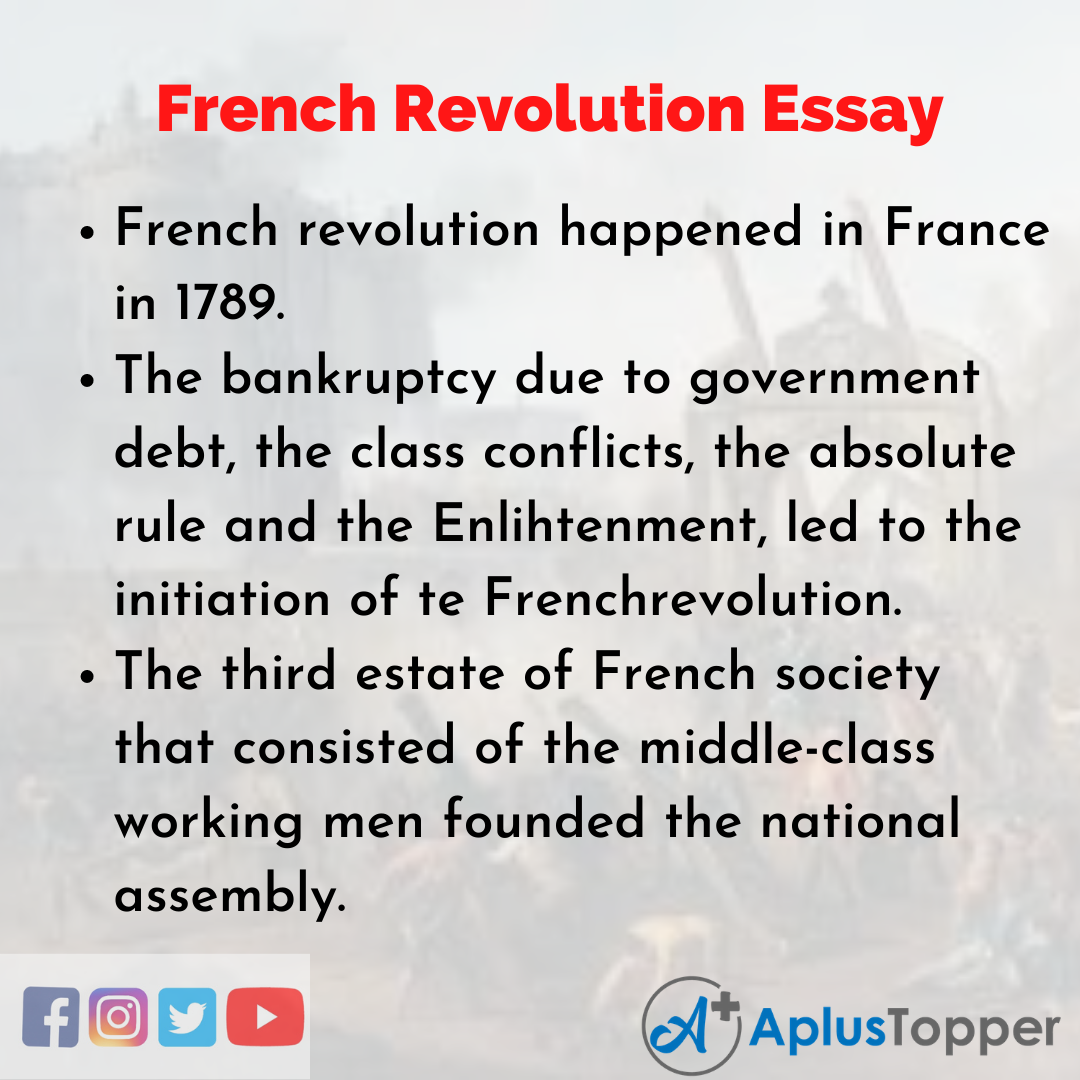 The French revolution was a horrifying event on the ground of France that continued for many years. The revolution started in 1789, with the formation of National assembly by the people of the third estate or the middle class. The reason for the revolution to strike was the bankruptcy due to government debts, the class conflicts, the absolutism rule and the ideas of Enlightenment. The national assembly revolted against the then ruler of France and accused them of spending country taxes on their lavish lifestyles. They also wanted the aristocratic powers of the first and second estate to be abolished who lived and spend on the taxes paid by the third estate.

The French revolution led to a changed political scenario of France; the success and failures of the revolution result in chaos over the country. Among the success, France became a democratic republic with a new constitution. The new rules gave the third estate equal and more power which also led to the rational collapse of the absolute power.

Among the failures, the massacre of 1792, that led to killings of thousands of countrymen and the national assembly sentencing 20-40 thousand men to death were involved. The French Revolution ended in 1799 with the onset of Napoleon as the dictator.

1. French revolution happened in France in 1789.
2. It was a horrifying event in the history of France.
3. The bankruptcy due to government debt, the class conflicts, the absolute rule and the Enlightenment, led to the initiation of the French revolution.
4. The third estate of the French society that consisted of the middle-class working men founded the national assembly.
5. The national assembly revolted against the absolute and nonchalant rulers of the country.
6. The French revolution, in its first half, gave the lower class equal powers in the society.
7. The lower class after attaining equality rationally led to the decline of the absolute power.
8. In 1792, France became a democratic republic with a new constitution.
9. The French revolutions greatest failure was the massacre of 1792.
10. The revolution ended in 1799, with Napoleon coming into power. 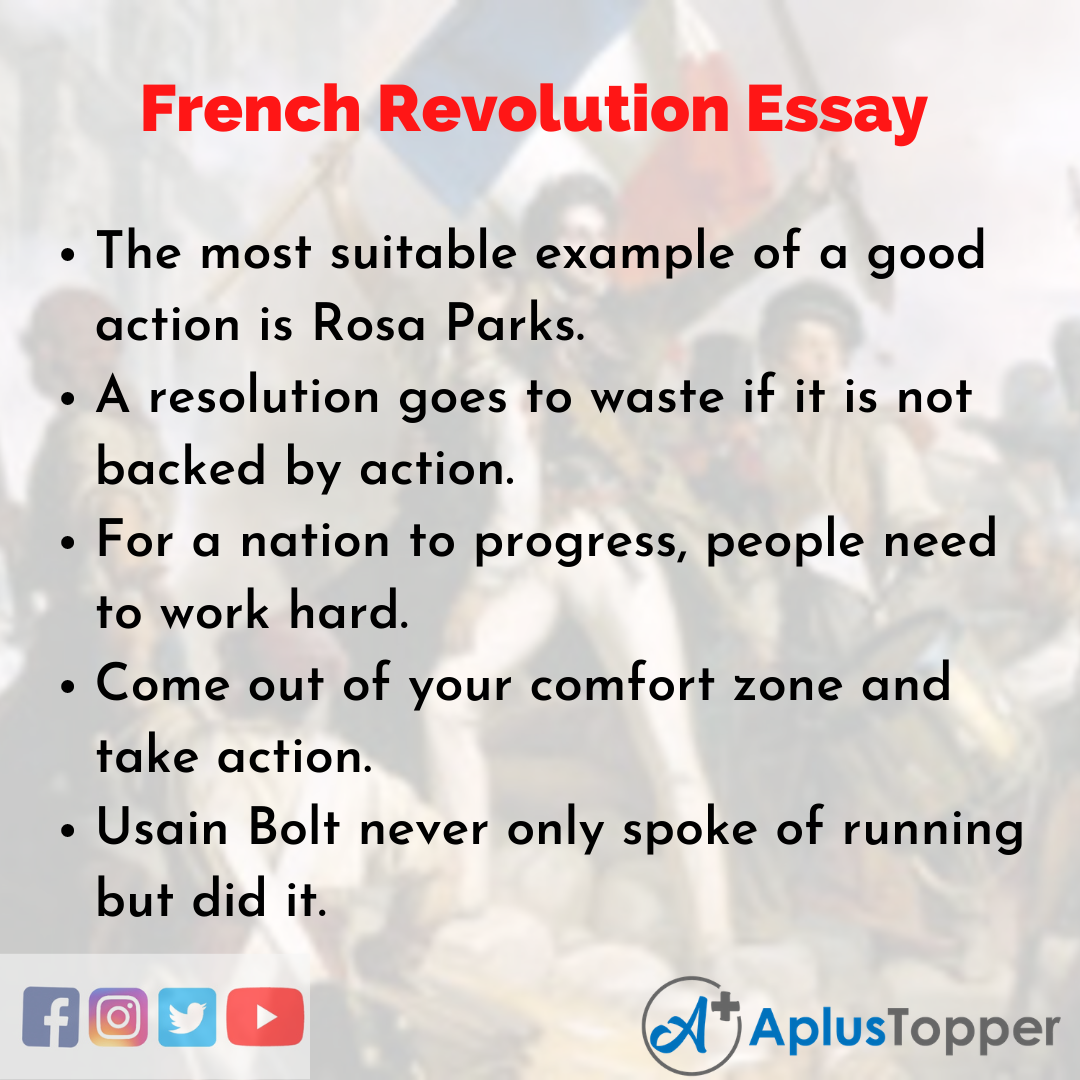 Question 1.
When did the French revolution end?

Question 2.
Who started the French Revolution?

Answer:
The French revolution was started by the third estate of the French society. The third estate comprised of the middle-class men and were 97 per cent of the society.

Question 3.
What are the great names of the French revolution?

Answer:
Emmanuel-Joseph Sieyès, Marquis de Lafayette, Louis-Antoine de Saint, Claire Lacombe are some great French revolutionaries. They have played a major role in the success of the French revolution.

Question 4.
How long did the French revolution last?

Answer:
French revolution lasted for almost ten years. It started in 1789 and ended in 1799.