Foods that Start with Z: We consume a wide variety of foods from all around the world. Keeping in mind that it’s difficult to keep track of everything, we have compiled a list of food names for you.

Names of Foods Whose Name Starts With Z

List of Food Names With Letter Z At The Start

Fascinating Facts On Foods That Start With The Letter Z

Zander is a type of commonly found fish throughout most parts of Europe. Zander fillets are predominantly baked, fried or grilled. It is also one of the fishes of Europe, which is highly valued for its light and tender meat with few bones.

Ziti is a hollow pasta type noodle originating in Campania. These are long and need to be broken by hand into smaller pieces before cooking. These can be stuffed or baked. In Silicy, it is served traditionally during weddings.

Zoni is a popular type of Japanese soup containing mochi rice cakes. It is the most auspicious dish eaten during the Japanese New Year. The tradition of eating zoni dates back towards the end of the Muromachi period during the new year. This is offered to the gods during this ceremony.

Zongzi is a traditional Chinese rice dish made with rice stuffed with different fillings wrapped with Bamboo leaves. While traditionally they are wrapped in bamboo leaves, leaves of lotus, reed, banana are also used as a substitute in different countries. This can be steamed or boiled, and they are popularly called rice dumplings or sticky rice dumplings in western countries.

Zerde is a Turkish dessert made with rice pudding flavoured with turmeric, nuts, currants, sugar and rose water. It is coloured yellow with saffron. This is a kind of festive dish in turkey served during the first ten days of the sacred month of Muharram. It is also served during weddings and birth celebrations.

Zapiekanka is a very popular street food in Poland since the 1970s. It is an open-faced sandwich or a Polish pizza covered with a mixture of onions, mushrooms topped with some cheese. It is served hot with some ketchup drizzled with oil.

Zereshk polo is a Persian dish of chicken cooked with saffron, tomato sauce and served with basmati rice and zereshk berries. It is a mixture of sweet and sour and one of the main pillars of Persian cooking.

Zrazy is a popular Poland dish. It is constitutes of thin slices of beef flavoured with salt pepper stuffed with some eggs, vegetables, mushrooms, potatoes, pickles. These are at times served with flour dust or topped with sour cream.

Zingers is a commercially available snack cake filled with white cream sold by Dolly Madison and Hostess. The chocolate and vanilla varieties are essentially frosted, while on the other hand, the raspberry flavour is covered with a fruity glaze and portions of shredded coconut and corn syrup.

Zucchini is a summer squash plant whose fruits are harvested when the seeds are soft and edible. It successfully meets the definition of fruit even though it is considered a vegetable. This may be called marrow when mature. It’s most often eaten as a savoury side dish, and it can be used in sweet baked goods.

Zeppole is an Italian doughnut made with sweet and flaky dough filled with cream, custard, powdered sugar, jelly, butter or honey mixture. It is a deep-fried dough ball of varying sizes, typically that of Rome and Naples. They are at times filled with ricotta with chocolates, fruits and honey. They are called crispellies in the United States. Zucchini fritters are modified pancakes made with shredded zucchini combined with egg, flour, and toppings like garlic, grated parmesan, salt, and pepper. These are nutritious, low in calories.

Zopf is a type of sweet, savoury bread, a type of Swiss, Austrian or Bavarian bread. It is made with milk, flour, butter, egg, yeast. It is originated in Switzerland. The bread is brushed with the egg, which gives it a golden colour after baking and is traditionally eaten on Sunday morning.

Zig-zag vine fruits are found in the rainforests of Australia. It is an orange fruit with edible flesh, which is generally used for sauces.

Zinfandel, also known as Primitivo, is a black wine grape. It produces red wine or US white wine.

Zebra cake is a combination of yellow and chocolate cake poured into the pan to give stripes to it instead of being marbled. This precession is achieved by dropping alternative spoons of batter in the pan. 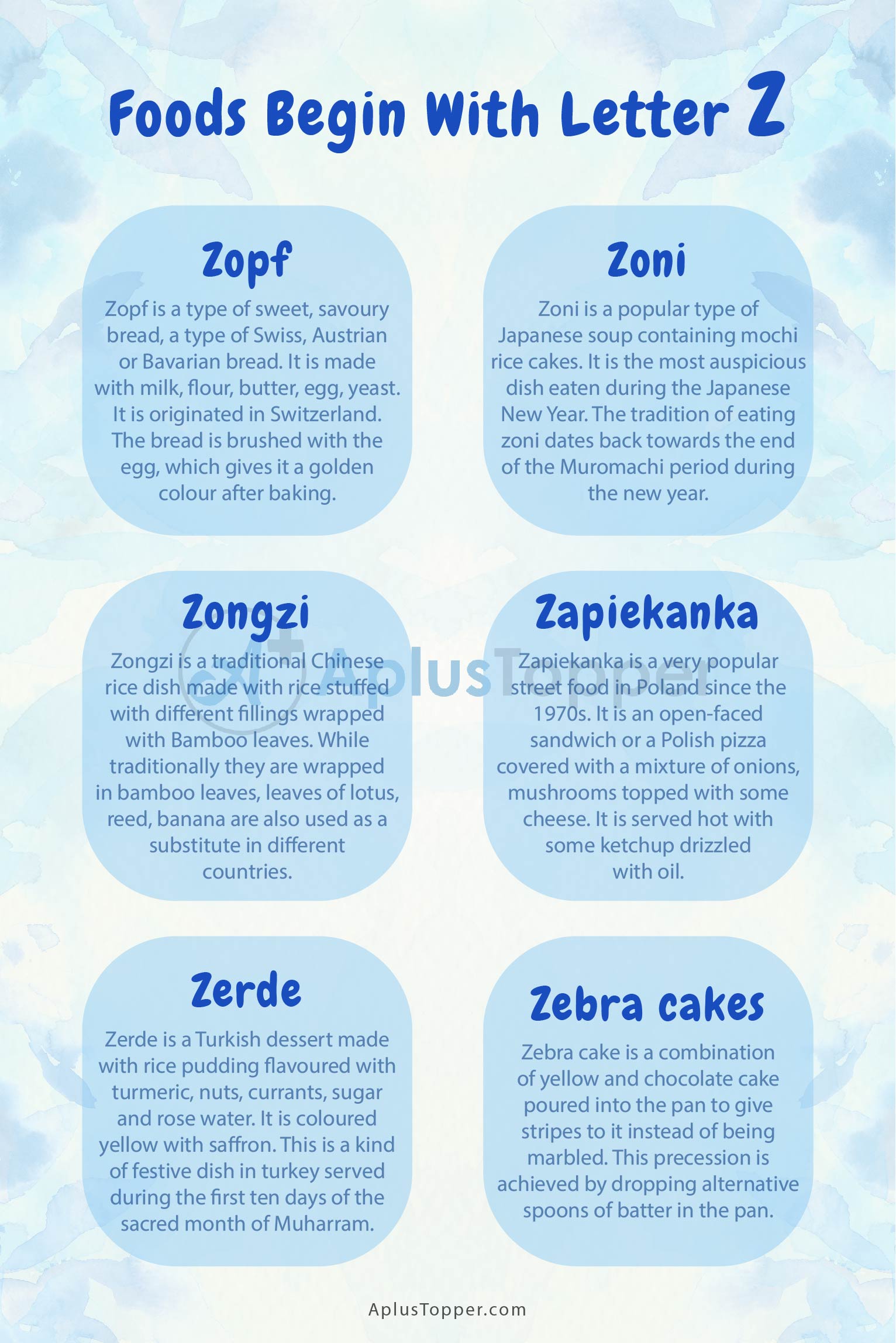