Foods that Start with P: What is that one favorite thing we all like? Food! Our world is stuffed with a wide variety of delicacies for you to choose from. In this article let us discuss the list of food that start with the letter P.

Names of Foods Whose Name Starts With P

List of Food Names With Letter P At The Start

Packham Pear, also known as Packham’s Triumph, is a cross between Bartlett pear and a Germain Pear. They are very juicy and creamy with a sweet aromatic flavor. Packham Pear is found during the spring in the Northern Hemisphere, and in the southern hemisphere, it is found during the fall season. They are known for their smooth and sweet consistency, and that they are rich in Vitamin C and Dietary Fiber.

The Parrotfish, mostly known for their dentition, that is, the arrangement of their teeth. Parrotfish have a distinctive tightly packed dentition whose effect makes the surface of their external jaw bone look, Parrot.

They are a group of 90 species of vibrant fish. These fishes, when converted into a part of the cuisines, they make a great dish. They are usually presented as grilled or steamed.

This species of hickory native to the southern United States and the northern parts of Mexico are cultivated for their seeds. Raw pecans contain a whole bunch of proteins, fiber, and healthy fats, which are suitable for health. Pecans can also help in looking after heart health and controlling diabetes, and since it contains antioxidants, it helps in preventing diseases.

Peppermint, which is a hybrid Mint, is a product of the cross between a watermint and spearmint. This aromatic plant is used to give additional flavors in cosmetics and different dishes. The dried leaves are used in tea. Peppermint is believed to have a calm and soothing effect when taken.

Pine Mushrooms contains all the essential minerals that a body requires. 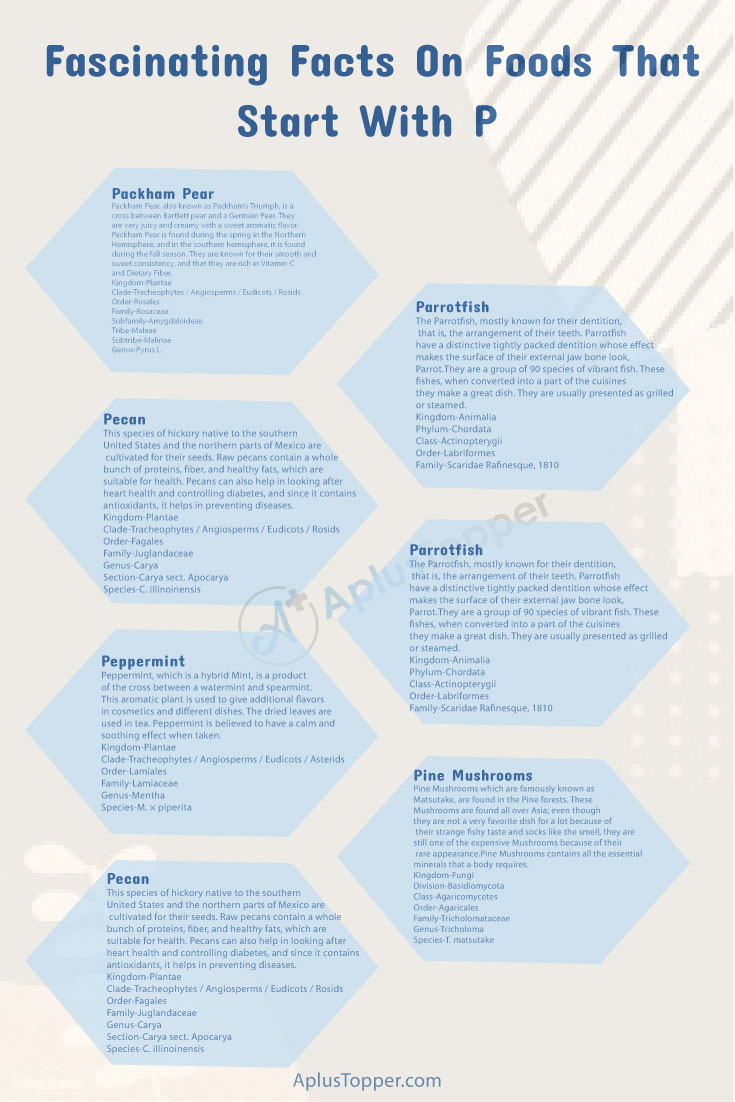 These Popular dried beans from the US are light brown are rich in Minerals and Vitamins. They are mostly eaten as a whole or smashed. They are also used in the fillings of Burritos and Tacos. They are rich in nutrients and can be particularly good for heart diseases and diabetes.

Poppy seeds are a type of oil seeds that are obtained from the opium poppy. The poppy seeds are kidney-shaped, and they are small and black in color. Poppy seeds are used to derive oils and are also used in different recipes.

They are valuable sources for protein and dietary fiber, and it also contains some essential vitamins and minerals.

Potato, the most common and our favorite, this root vegetable, filled with starch, is the most common ingredient in any type of cuisine, in any part of the world. Potatoes are loaded with Fiber and Antioxidants. It can be incorporated with a wide variety of dishes. For the simplest of dishes, potatoes can be fried, or boiled and smashed or even used as a filler ingredient.

Pumpkin, one of the most common fruits since we love it for our Halloween decorations and Thanksgiving. This winter squash is highly nutritious. Pumpkins are rich in Vitamin A, and since it has high Antioxidants, it helps us to prevent chronic diseases Pumpkin seeds are also edible and contribute to health benefits.

This delicate Northwest Chinese fruit contains a sweet smell, and its reddish-yellow skin is smooth and soft. In addition to being very nutritious, Peaches also contain antioxidants, and they may also aid indigestion. Peaches also maintain healthy skin.

The Pomegranate plant bears its bright red fruit, packed with a lot of health benefits. Pomegranate contains two most prominent ingredients, Punicalagins a very potent antioxidant and Punicic Acid, which has potent biological effects. Pomegranate is also helpful in skincare, and it is also beneficial when it comes to cancer. 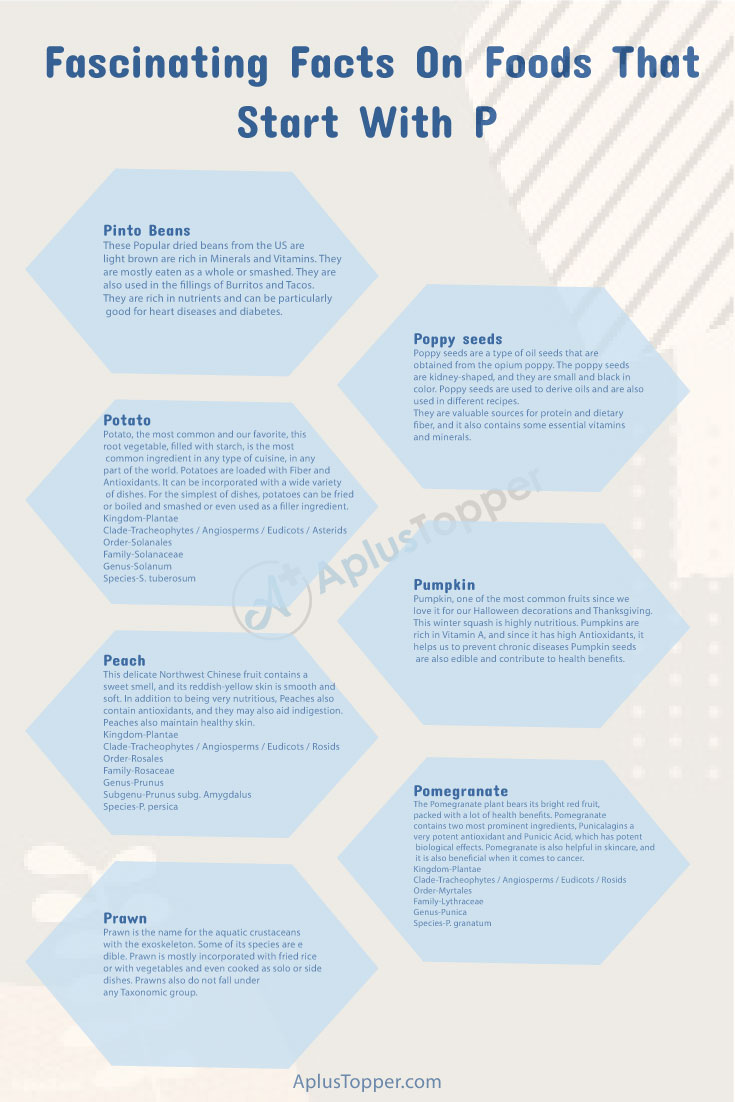 Prawn is the name for the aquatic crustaceans with the exoskeleton. Some of its species are edible. Prawn is mostly incorporated with fried rice or with vegetables and even cooked as solo or side dishes. Prawns also do not fall under any Taxonomic group.

Papayas, also known as papaws or pawpaw’s, were rare and extinct previously, but now they are found all over the world. The taste is sweet and contains vibrant colors and immense benefits. Papaya is extremely good for the skin and stomach, and it also helps in curing heart diseases.

These South American legumes are also known as groundnuts, earthnuts, or goobers. Peanuts are not for raw eating, and they are consumed as roasted peanuts or peanut butter. Peanuts are also used in desserts and cakes and as snacks too. They are rich in protein, fat, and other nutrients.

These popular seeds, which can be found in every part of the world, is not only famous for their texture but it also high in nutrients and contains antioxidants. They are the most common and a filling source of protein. They can be boiled or fried, seasoned, and prepared as solo dishes, but Peas are primarily used as an ingredient in a dish or as a side dish.

This tropical fruit is incredibly delicious and is loaded with nutrients. They also contain plenty of vitamin C, which helps to maintain healthy skin. The rich antioxidants in Pineapple help in fighting diseases. Pineapple reduces the risk of cancer and fights indigestion.