Foods that Start with O: So many varieties of food around surround us. Here is a list of food starting with the letter O.

Names of Foods Whose Name Starts With O

List of Food Names With Letter O At The Start

Fascinating Facts On Foods That Start With O

Oat milk is plant milk made from entire oat grains. Oat milk comes in various flavors, and you may select between sweetened and unsweetened varieties depending on your dietary needs. It is a popular dairy substitute with numerous health benefits.

An oatcake is comparable to a biscuit or cracker, yet it can also resemble a pancake. It is a flatbread made using oats as the primary ingredient, but one can also make it with plain or whole wheat flour. These oatcakes are generally prepared on a grill, although One can also bake them in the oven.

Oatmeal is a popular grain in Scotland due to the country’s climate, which has relatively low temperatures and high humidity levels. As a result, grain output is limited, and oatmeal is utilized in porridges, oatcakes, puddings, stuffing, and cheese coatings in Scotland.

Oats are grain species grown worldwide and mainly used as oatmeal and oat milk. But, oats are also generally used as a livestock feed. There are several ways to consume oats, whether as oatmeal for breakfast, oat milk in your daily coffee, or adding oats to a cookie recipe for some extra texture.

Oblea is a type of traditional dessert of Mexican origin and some other Latin American countries. The dessert has thin wafers which have a sweet filling. One can fill them with dulce de leche or arequipe and many people make oblea at home with jam, whipped cream, cheese or fruit fillings.

Obusuma is a type of traditional Kenyan dish that is made from cornmeal and is boiled until it has a thick porridge-like consistency. Obusuma is served alongside other meals, such as stews and curries, but one can also sweeten it with sugar.

In Nigeria, ogi is a fermented cereal pudding. Traditionally, it is prepared from maize, millet, or sorghum. These grains are soaked in water for several days, sometimes up to three days, before being wet-milled and sieved to remove any husks. The filtered result is next fermented for three days until it has a sour taste.

Okra is a warm-season vegetable that is often known as “woman fingers.” It contains a lot of minerals, antioxidants, fiber, and vitamins. One can prepare okra in several different ways. 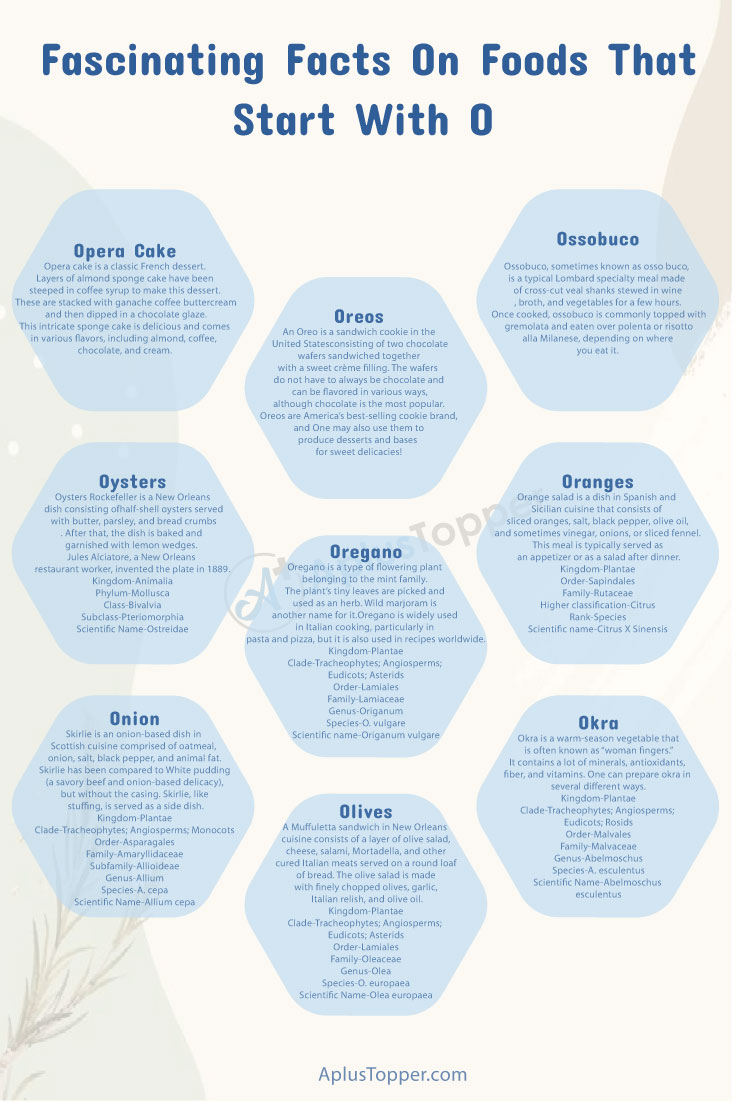 Okroshka is a traditional Russian cold soup. It consists of raw vegetables, eggs, boiled potatoes, and cooked meat, including beef, sausages, ham, or veal. If the soup contains ham, kvass is commonly added; it is a non-alcoholic beverage made from fermented rye or black bread.

A Muffuletta sandwich in New Orleans cuisine consists of a layer of olive salad, cheese, salami, Mortadella, and other cured Italian meats served on a round loaf of bread. The olive salad is made with finely chopped olives, garlic, Italian relish, and olive oil.

Olivet Cendre is a unique French cheese from the Olivet district on the Loire River. The Olivet Center cheese is manufactured from cow’s milk collected in the spring as the cows graze along the banks of the Loire. It is thought that their milk has the most flavor at this time. The cheese is then allowed to develop for at least a month before being coated in ashes and mold, which impart a spicy aroma.

An omelette is a unique dish made from beaten eggs that are fried in a frying pan in butter or oil. Often, midway through cooking, the omelette is folded over contents such as vegetables, chives, cheese, mushrooms, or meat. Different parts of the world have their spin on the traditional omelette, with other ranges and pans to cook it on. 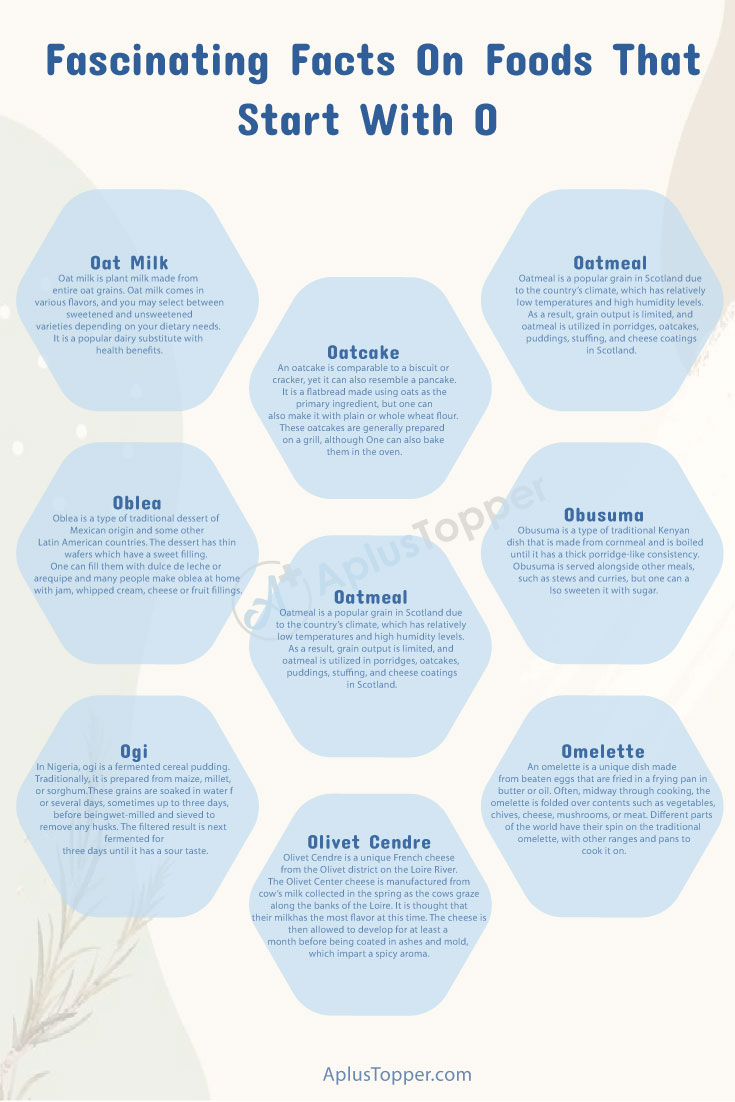 Skirlie is an onion-based dish in Scottish cuisine comprised of oatmeal, onion, salt, black pepper, and animal fat (or butter). Skirlie has been compared to White pudding (a savory beef and onion-based delicacy), but without the casing. Skirlie, like stuffing, is served as a side dish.

Opera cake is a classic French dessert. Layers of almond sponge cake have been steeped in coffee syrup to make this dessert. These are stacked with ganache coffee buttercream and then dipped in a chocolate glaze. This intricate sponge cake is delicious and comes in various flavors, including almond, coffee, chocolate, and cream.

In Mark Twain’s 1880 work A Tramp Abroad, opossum (what he termed “‘Possum”) is mentioned as part of a list of American-style foods that his main characters deem a “nourishing dinner.” Opossum meat was popular in American cuisine during the 18th and 19th centuries.

Orange salad is a dish in Spanish and Sicilian cuisine that consists of sliced oranges, salt, black pepper, olive oil, and sometimes vinegar, onions, or sliced fennel. This meal is typically served as an appetizer or as a salad after dinner.

Oregano is a type of flowering plant belonging to the mint family. The plant’s tiny leaves are picked and used as an herb. Wild marjoram is another name for it.

Oregano is widely used in Italian cooking, particularly in pasta and pizza, but it is also used in recipes worldwide.

An Oreo is a sandwich cookie in the United States consisting of two chocolate wafers sandwiched together with a sweet crème filling. The wafers do not have to always be chocolate and can be flavored in various ways, although chocolate is the most popular. Oreos are America’s best-selling cookie brand, and One may also use them to produce desserts and bases for sweet delicacies!

Ossobuco, sometimes known as osso buco, is a typical Lombard specialty meal made of cross-cut veal shanks stewed in wine, broth, and vegetables for a few hours. Once cooked, ossobuco is commonly topped with gremolata and eaten over polenta or risotto alla Milanese, depending on where you eat it.

Oysters Rockefeller is a New Orleans dish consisting of half-shell oysters served with butter, parsley, and bread crumbs. After that, the dish is baked and garnished with lemon wedges. Jules Alciatore, a New Orleans restaurant worker, invented the plate in 1889.