Names of Foods Whose Name Starts With N

List of Food Names With Letter N At The Start

Fascinating Facts On Foods That Start With N

Naan is an Indian flatbread made with flour, water, leavening (yeast), and sometimes milk or yogurt. It is cooked in a tandoor oven and served with curries and other main meals. It is well-known throughout the Indian diaspora and is enjoyed all around the world.

Nachos were invented in 1940 in Piedras Negras, Mexico, by restauranteur Ignacio “Nacho” Anaya. Anaya took fried tortilla triangles and coated them with melted cheese and pickled jalapenos when asked to make a new dish for his patrons. This meal was formerly known as “Nacho’s Special.”

Natuna is a classical French sauce named after the city of Nantua. It’s Bechamel-based and is made with cream and crayfish butter. One can use it in many dishes, but it pairs best with seafood!

This fruit is popular in East Asia, and ‘Nashi’ is the Japanese term for a pear! It has a distinctive round form, which leads to it being mistaken for an apple.

Nasi Goreng is possibly the most well-known Indonesian dish in the world. This simple rice meal is typically cooked with chicken, shallots, carrots, green beans, tomato paste, and chicken or shrimp on a bed of rice.

Natilla, often known as Natillas de Leche, is a creamy Spanish custard. It’s creamy, milky, and vanilla-flavored. Many Spaniards believe this to be comfort food from their childhood!

Natto is another N food from Japan. Like many Japanese foods and ingredients, Natto is prepared from fermented soybeans and is commonly used as a breakfast staple. Some even compare this sticky substance to bleu cheese, but with a sweeter and slightly bitter flavor.

Navel Oranges is because the skin of this delicious fruit features indentations that mimic a belly button! Navel oranges are one of the most well-known orange kinds globally, being sweet, juicy, and high in Vitamin C.

In French, this cylindrical cookie, which means “shuttle,” is produced with only five ingredients: flour, sugar, eggs, butter, and orange blossom scents. It is most popularly consumed in France at Candlemas; a Christian feast celebrated on February 2nd each year.

In the United States, Senate bean soup is made with navy beans, water, ham hocks, onion, butter, and sometimes potatoes, celery, and parsley. Since the early twentieth century, soup has been served every day in the Senate dining room. 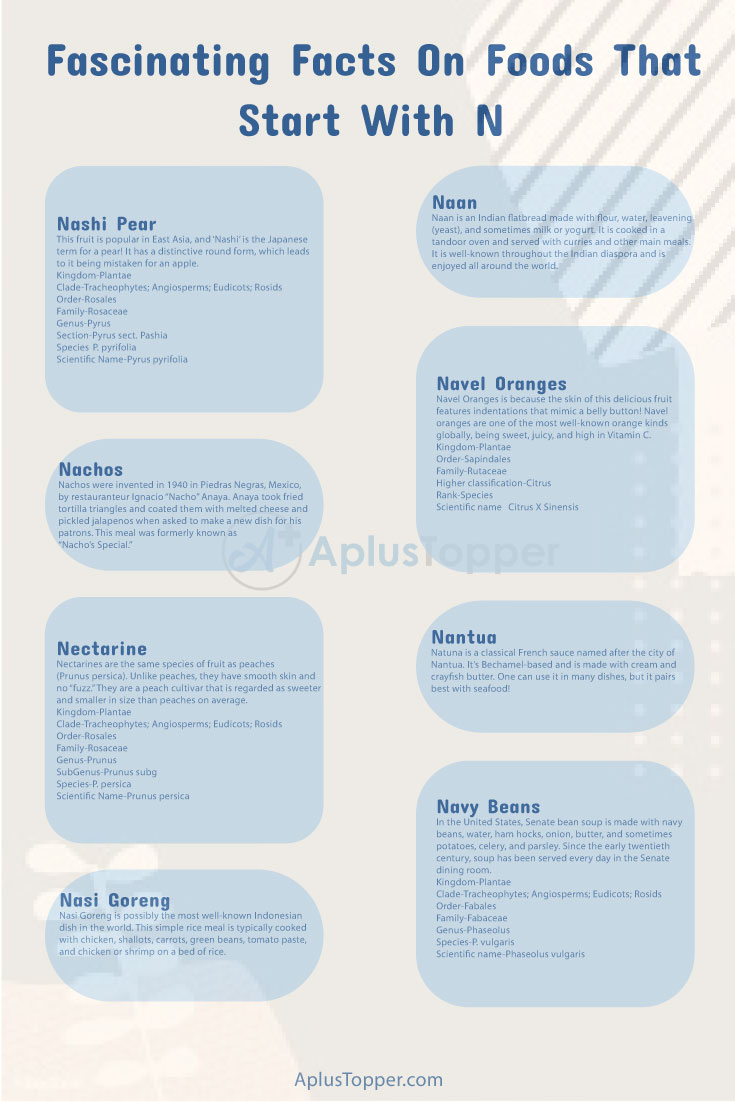 This sugary liquid found in flowers is what keeps bees busy! Honey’s primary sweetening agent is nectar, which is also used to sweeten fruit juices and desserts.

Nectarines are the same species of fruit as peaches (Prunus persica). Unlike peaches, they have smooth skin and no “fuzz.” They are a peach cultivar that is regarded as sweeter and smaller in size than peaches on average.

Neeps, another name for turnip, is related to cauliflower, brussels sprouts, and broccoli. When cooked, they have a sweet and earthy flavor with starchy flesh. They can be boiled, roasted, mashed, or pickled.

This one-of-a-kind Ethiopian beverage is produced with wine, hot water, sugar, and citrus fruit such as orange or lemon. Negus served hot, is named after its originator, Francis Negus, an English army colonel.

If you’re looking for a new dessert, you should try Nesselrode pudding! This frozen sweet delight is composed of Cognac, egg yolks, raisins, sugar, vanilla, cream, and the star of the show, chestnuts!

Neufchatel cheese is a soft cheese from France, named after the Normandy commune of Neufchatel-en-Bray. It is created from raw milk and salt, and when thoroughly matured, it makes a soft white rind. The cheese is served in heart-shaped formations in France, where it is standardized.

Noodles are famous among foodies all across the world! They are a common element in practically all Asian cuisines and can be prepared with various ingredients. Some of the most popular are egg noodles, rice noodles, and ramen noodles. They’re versatile and filling, and they’re great in a stir-fry or with broth. 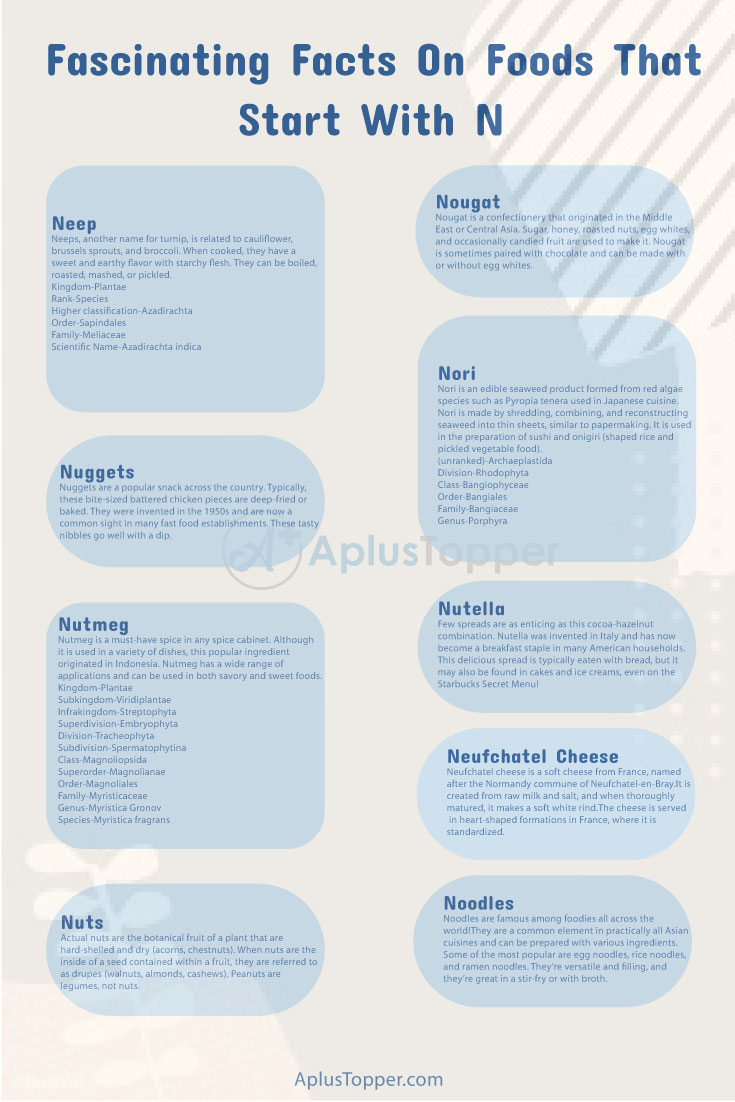 Nori is an edible seaweed product formed from red algae species such as Pyropia tenera used in Japanese cuisine. Nori is made by shredding, combining, and reconstructing seaweed into thin sheets, similar to papermaking. It is used in the preparation of sushi and onigiri (shaped rice and pickled vegetable food).

Norman tart is another exquisite dish that begins with the letter N. This Normandy sweet dish, similar to apple pie, is constructed with tiny slices of French apples, a thin crust, and topped with creamy custard.

Nougat is a confectionery that originated in the Middle East or Central Asia. Sugar, honey, roasted nuts, egg whites, and occasionally candied fruit are used to make it. Nougat is sometimes paired with chocolate and can be made with or without egg whites.

Nuggets are a popular snack across the country. Typically, these bite-sized battered chicken pieces are deep-fried or baked. They were invented in the 1950s and are now a common sight in many fast food establishments. These tasty nibbles go well with a dip.

Few spreads are as enticing as this cocoa-hazelnut combination. Nutella was invented in Italy and has now become a breakfast staple in many American households. This delicious spread is typically eaten with bread, but it may also be found in cakes and ice creams, even on the Starbucks Secret Menu!

Nutmeg is a must-have spice in any spice cabinet. Although it is used in a variety of dishes, this popular ingredient originated in Indonesia. Nutmeg has a wide range of applications and can be used in both savory and sweet foods.

Actual nuts are the botanical fruit of a plant that are hard-shelled and dry (acorns, chestnuts). When nuts are the inside of a seed contained within a fruit, they are referred to as drupes (walnuts, almonds, cashews). Peanuts are legumes, not nuts.