Foods that Start With K: Much to one’s surprise, many food items start with the letter K. From items of everyday consumption to exotic items from around the world, there is no shortage of foods beginning with K. This article has arranged a comprehensive list of food products that begin with the alphabet K.

Name of Foods Whose Name Starts With K

List of Foods Names With Letter K At The Start

Fascinating Facts On Foods That Start With K

It is a German word that is used for cakes. Kuchen mostly has eggs, sugar, and flour as the main ingredients, and sometimes fat is also included in the recipe.

Compared to cakes, it has fewer decorations and is less fancy. In Germany, kuchen is usually consumed along with coffee.

It is a type of sausage that originated from Northern Germany. The sausage contains additional potato starch and bacon and is served along with white bread and mustard.

It is known as Knockwurst in North America, and there it is, a short, plump sausage that contains ground pork and veal and garlic. It is highly seasoned and is served as a sandwich.

It is a Korean staple food that is a traditional cuisine. It is a side dish that is prepared with vegetables and seasonings. The vegetables that are mainly used are Korean radish and Napa cabbage. They are salted, fermented, and seasoned with spring onions, garlic, Korena chili powder, jeotgal, etc.

Kimchi is usually served with every Korean dish as a side dish, but You can also consume it alone.

It is a type of edible berry with a light green flesh with seeds inside and fuzzy, brown skin outside. Typically, the whole berry is edible, but the outside is discarded due to the fuzzy skin.

It has a sweet flavor, and it can be eaten raw and used in the preparation of juices and used as decoration.

It is a traditional Ashkenazi Jewish cuisine that is served on Jewish holidays. It is a casserole or pudding that is baked and is mainly prepared with egg noodles. We can also prepare the kugel with potatoes, matzo, etc.

Among the people of Roma, it is known as pirogo and is a famous dessert.

Also popularly known as leaf cabbage, Kale is a type of cabbage whose leaves are edible. Various dishes can be made using these leaves, such as Kale chips, colcannon, Kale sausages, etc.

In northern Germany, Kale is the staple food and is also considered as their comfort food.

It is a dish prepared with cooked meat. It originated in the middle east and has several variations around the world.

In parts of Asia, it is considered a grilled meat dish. In northern America, kebabs are prepared by skewing small meat cubes on skewers and then cooked.

The meat used can be of any type. It can be beef, pork, mutton, goat, lamb, and fish. 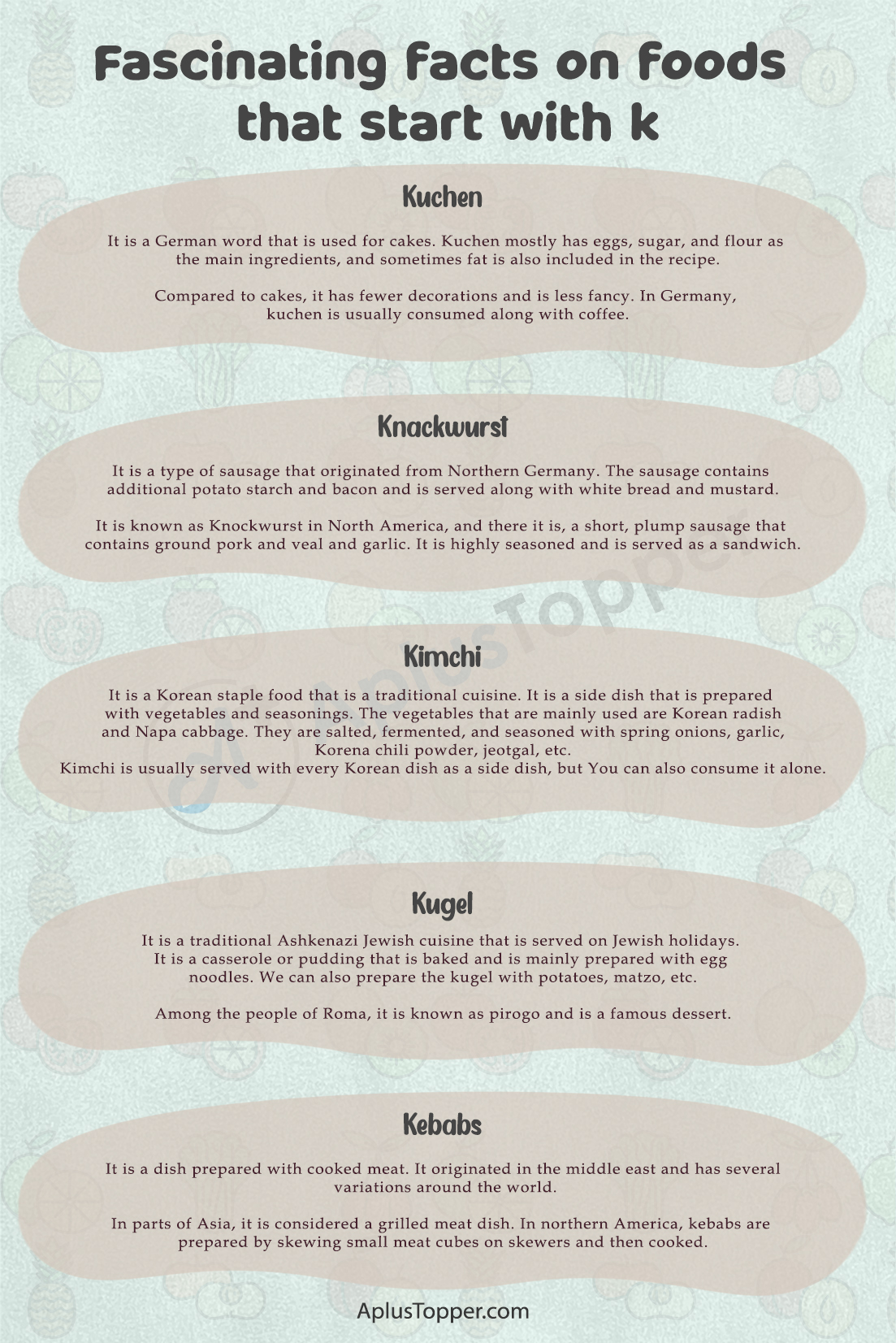 It is a type of cabbage and is commonly known as a German turnip. It is not similar to a turnip and can be consumed raw.

Both the stem and leaves of the plant can be cooked and consumed, and they are cooked in different ways around the world.

It is a citrus fruit category that grows on plants that are endemic to Southern China and tropical Southeast Asia. The leaves of the plant are used in various dishes for added fragrance.

The peel is also used for additional aroma in cuisines. The entire fruit is crystallized for consumption in Cambodia.

Kasha is a buckwheat grain. It is roasted to prepare cereals or porridge. The roasting has a nutty flavor, and when cooked, it gives a very gummy consistency and a firm texture.

It is a type of spit cake that is specific to the Székelys of Transylvania. It is prepared with a dough of yeast. Strips of that dough are prepared and then is wrapped around a cone-shaped baking spit.

It is covered in granulated sugar and is roasted until it’s properly cooked. The sugar gets caramelized and forms a crispy brown texture.

It is a specific type of nutritious tea that is consumed due to its health benefits. It is prepared by fermenting sugared tea with the help of a certain bacteria.

It originated in China and has a sweet taste. For enhanced flavor, various spices, juices, and fruits are added to this tea.

It is a type of sweet popcorn that originated in the United States. As the name suggests, it was initially prepared and cooked in cast iron kettles, but now different pans and pots are also used.

It is sweet and is seasoned with sugar, oil, and salt.

It is a group of small trees that beats fruits. It looks like an orange but is much smaller and harder in comparison.

Since the peel of Kumquats is also edible, they are usually consumed with peel and sometimes used to make fruit salads.

It can either be dried or pickled and used.

It is a type of bread roll that originated from Austria. It is prepared with white flour, malt, yeast, salt, and water. It is crusty and has a round shape. It is also known as Vienna Roll. 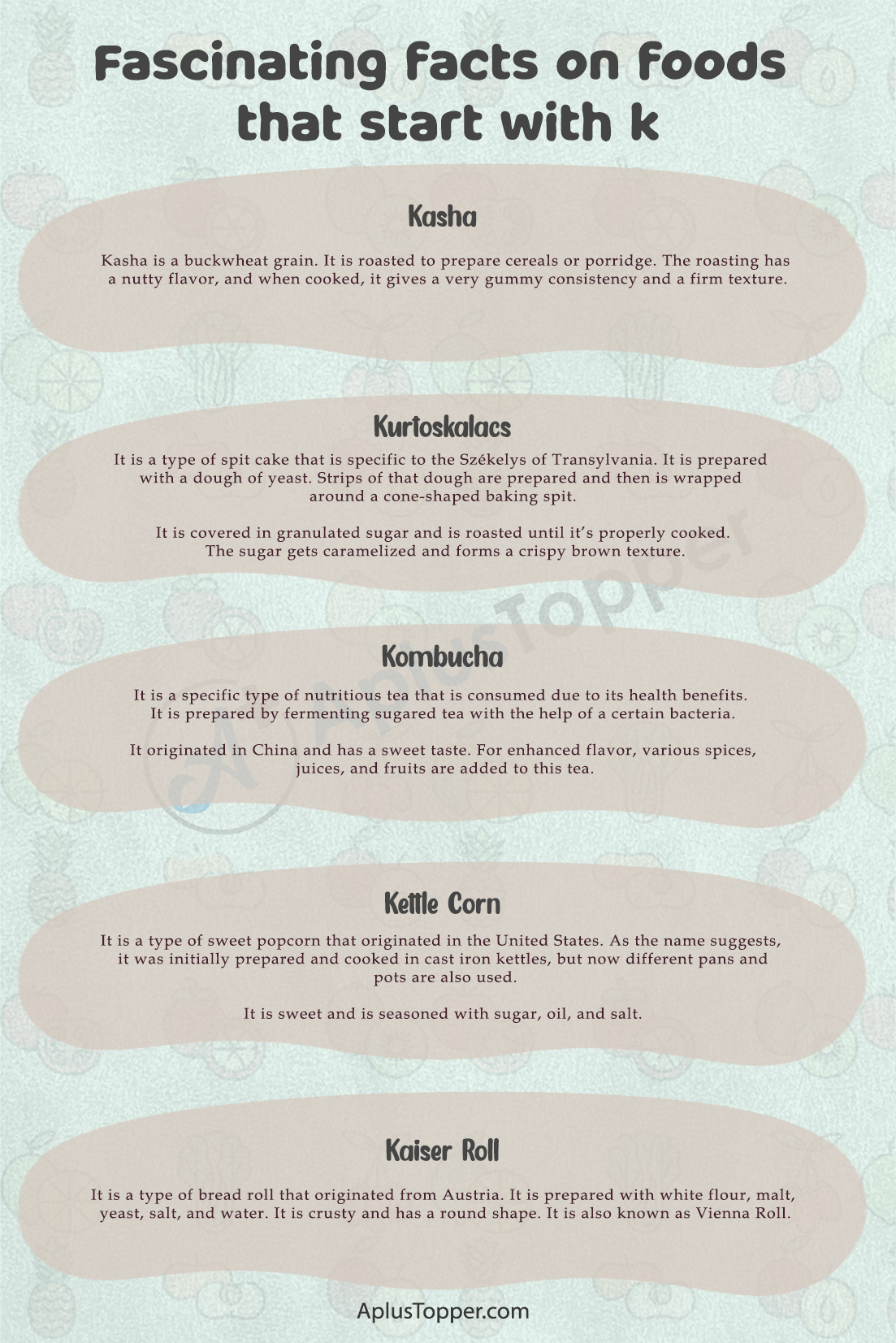