Foods that Start With J: The world is a huge place, and various countries have their distinctive food that starts with the letter J. Some of the food items might be familiar to you, while there can also be some items whose names are unheard or undiscovered by you.

For this reason, this article offers you a list of food items that start with the letter J. These food items are found and consumed in different ways in different parts of the world.

Name of Foods Whose Name Starts With J

List of Foods Names With Letter J At The Start

Fascinating facts on foods that start with J

It is a condiment prepared from It is conventionally prepared from pressed fruit, sugar, and pectin. Most jams are cooked. After manufacturing, jam usually is stored in airtight jars.

Usually, a jam contains a somewhat comparable content of sugar as it contains fruit. The two parts are then cooked to form a gel-like consistency.

It is a plant whose tuberous root is edible. The interior of the root is creamy white, and the texture is crisp like a pear. It is generally consumed raw, and sometimes chili powder, lemon, ginger, soy sauce, garlic, etc., are also added for additional flavor.

It has a sweet flavor topped with a starchy taste and is consumed in different ways worldwide. But, except for the root, the rest should not be consumed since it is highly poisonous.

Jalapeño is a small chili pepper used in Mexican dishes and consumed while it is still green.

They are very spicy and hot when consumed. However, when compared to others, they are considered to be more useful and flavorful.

Jalapeños are frequently used in cooking because it has a natural flavor. They can be stuffed, roasted, grilled, etc. There are various ways of cooking and consuming a Jalapeño.

It is a type of fruit that is found in Brazil, Southeast Asia, and Africa. It has rough skin and resembles a melon. The seeds of Jackfruit have a sweet taste and can be consumed after cooking.

Ripe jackfruits are sweet flavored and can either be consumed raw or used to prepare desserts. On the other hand, Unripe jackfruits have a meat-like texture and are used in the preparations of curry with spices.

It is a popular Korean dish that is made up of noodles. It is generally prepared with dangmyeon, a kind of cellophane noodle made of sweet potato starch. The noodles are stir-fried with l vegetables, meat, and seasonings.

Japchae is sweet and savory in taste and can be consumed as a side dish and the main dish.

It is a very famous French sandwich that is prepared with ham. A baguette with butter spread on it is filled with ham slices.

Primarily associated with Jamaica, jerk chicken is a dish made up of grilled, spicy meat. It is common in the Caribbean and has a perfect spicy and smoky flavor.

This chicken is famous for its pungent marinade and is often served with sweet potatoes, beans, rice, etc. 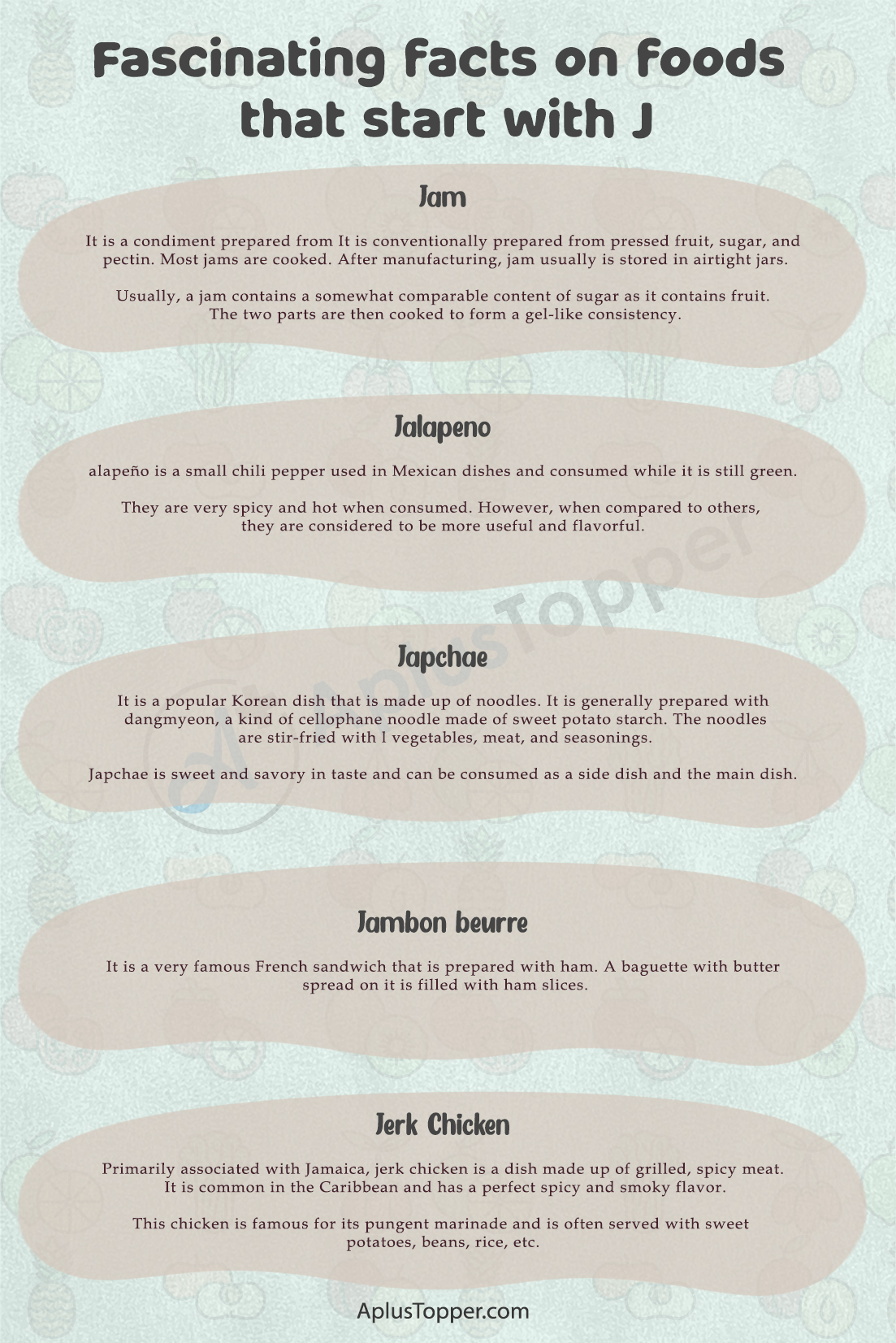 It is a type of dessert that must be served and consumed chilled. Jelly is prepared by extracting juice from fruits and then cooking that juice with sugar and pectin. After cooking, the juice forms a uniform and thick consistency, which is then consumed as jelly.

There are many fruits like grapes, strawberries, cranberry, etc., whose juice is extracted to form jelly.

It is an evergreen coniferous found in the incredible temperate region of the Northern Hemisphere. The shrub has blue and black cone seeds, which are known as Juniper berries.

These berries cannot be consumed raw due to their bitterness and hence are dried and sold. They are used to give meats, stuffings, and sauces an enhanced flavor.

It is a Cajun and Creole rice dish that originated in France. It is prepared with rice, meat, and vegetables. The meat includes sausages and after sautéing is mixed with the vegetables and rice. It is then cooked with seasonings and broth until the rice is done.

Jambalaya has two different ways of cooking where one includes tomato, and the other doesn’t.

These are a type of pastry that is filled with chunks of ham and cheese. They are square and, in Ireland, are served as a deli item.

It is a sunflower endemic to central North America and is cultivated for its tuber, which is utilized as a root vegetable.

The tubers can be consumed raw and can also be cooked and pickled. It has a sweet taste owing to the presence of fructose in it.

It is a purplish-black fruit that grows in Brazil. It has white pulp, and it tastes both sweet and acidic. There are lots of varieties of Jabuticaba fruit, and they have different tastes.

It can be consumed raw and used in making jam, juice, liquor, and jellies. It starts fermenting after 3-4 days of harvest, and it is not available in areas where it is not cultivated.

It is a cornmeal flatbread. It is consumed in the West Indies, Saint Croix, Dominican Republic, Colombia, United States, and The Bahamas.

The modern johnnycake is a fried cornmeal gruel that is prepared with yellow or white cornmeal. The cornmeal is mixed with hot water and salt and is sometimes sweetened.

They are a lot like pancakes and are served along with maple syrup.

It is a dish of West Africa. The method adopted for its preparation and ingredients used in making the dish may vary across different areas. Usually, it is prepared by putting long-grained rice along with different vegetables and meat in a pot. It is then garnished and seasoned with various spices and is cooked until the rice is done. 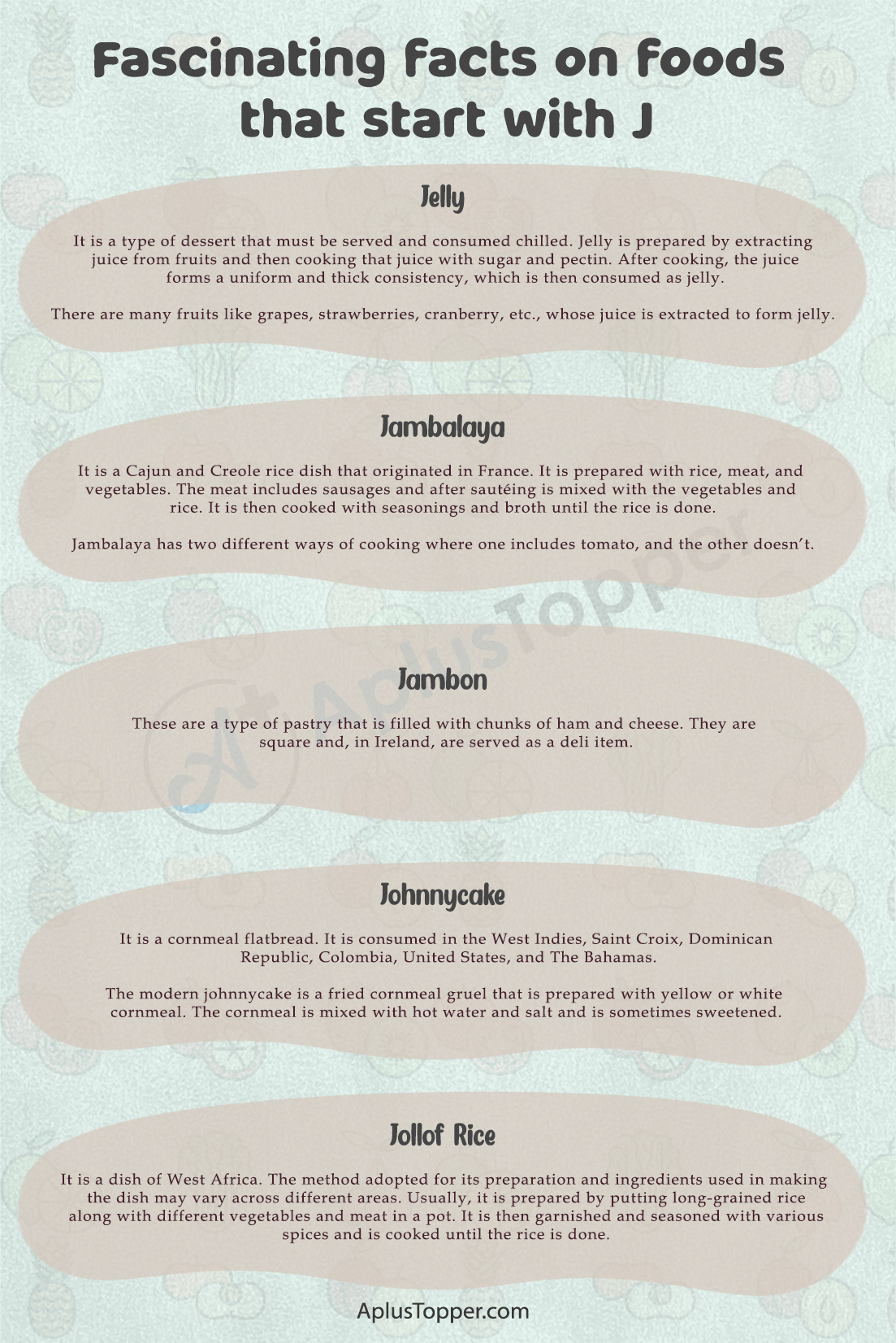 It is a type of plum that grows on shrubs and trees endemic to China. It is also found in Japan, Korea, Australia, and the United States. The texture of the fruit is very smooth and has a dusky yellow color after it is ripened.

Japanese plum has a delightful taste and is also used as a natural sweetener instead of sugar while cooking desserts.

Commonly consumed in China and certain parts of East Asia, Jiaozi is a Chinese dumpling. The filling of these dumplings mainly consists of meat, but We can also use vegetables.

It can be steamed, boiled, fried, and is usually served with sesame oil and black vinegar. It is also served with soup sometimes.

It is an evergreen tropical tree originally native to the subcontinent of India and is found in the regions of Southeast Asia, Florida, Hawaii, South Africa, and the Caribbean.

The flavor of a Java plum is sweet and acidic, and it is generally consumed raw. We can also use it in making jam, jelly, sorbet, and sauces.