Name of Foods Whose Name Starts With I

List of Foods Names With Letter J At The Start

Fascinating Facts On Foods That Start With J

It is a type of fruit that grows in a shrub near the sea. It looks similar to plum as it also has black or red skin. The flesh of an icaco is sweet and subtle and is mainly turned into jams. If they are roasted, they have a taste similar to almonds.

It is a Japanese sashimi dish where raw fish is prepared and served. Even though mainly fish is used for this dish, shrimps, lobsters, and octopuses are also used sometimes.

The fish is served intact after only making a few cuts so that the movements of the heart and gill are still visible. It is presented with sauces and pickled vegetables.

These are orange- and yellow-colored small fruits that have glossy skin. It is a type of dry fruits.

We can also use Inca berries in cakes, cookies, protein balls, and other meals for additional flavor.

Originating from India, Idli is a favorite breakfast item eaten in the southern part of India and Sri Lanka. It is a rice cake prepared by steaming up a fermented batter of rice and black lentils.

They are very fluffy and mild-flavored and hence are served along with chutney or ‘sambar’ or any curry.

Idiyappam is an Indian snack originating from Kerala and Tamil Nadu and is famous in different Asian countries. This dish is prepared by making noodles out of rice flour and then turning those noodles into a flat disc. The disc is then steamed and is served with coconut chutney or any stew or curry.

It is a plant whose seeds, stems, and leaves are all edible. The seeds of this plant are used to prepare a brown mustard dressing that is relatively spicier than the yellow mustard.

All the parts of the plant are used in Nepali cuisine and are also used in Punjabi cuisines. In African cooking, the leaves of this plant are used.

It is a tropical fruit that originated in Central America. This fruit is of two types- one having a sweet taste while the other has a tart taste.

The one with the sweet taste is white inside and green outside, while the other is pink outside and rosy-colored inside. Ilama is usually served chilled. While sometimes, the sweet one is served with sugar and cream, the tart flavored one is served with a drop of lemon juice.

It is a sweet frozen food that is consumed either as a dessert or as a snack. It is prepared from either cream or dairy milk. Even being a dessert, People can serve ice cream along with other desserts as well.

It varies in colors and is loved by all.

It is a type of sushi dish that is prepared by stuffing vinegar sushi rice inside tofu skins. The tofu is seasoned and fried. Before the stuffing of rice, the fried tofu is boiled in dashi stock. The stock is seasoned with sugar and soy sauce. A national dish in Eritrea and Ethiopia, Injera is a fermented flatbread that has a spongy texture. It is traditionally prepared with teff flour and is sour.

The sour taste of injera is due to fermentation. It is pretty similar to a South Indian dish called ‘dosa.’

Also known as ice cream bean, Inga Edulis is a fruit that is endemic to South America. The seed of this fruit is surrounded by white flesh that is sweet and is consumed raw.

The taste of this fruit is compared to vanilla ice cream. The seeds of Inga Edulis are edible once cooked and taste like chickpeas.

In Columbia, the women use the white pulp to prepare an alcoholic beverage known as cachiri.

It is a lettuce that is generally used in preparing salads or burgers. It has a crispy texture but has fewer vitamins and nutrients when compared to other green vegetables.

A famous snack consumed in the Philippines, Isaw is prepared from barbecued chicken or pig intestines.

Thorough cleaning of the intestines is done before grilling.

The intestines are served in a skewer along with a dipping of vinegar or other barbecue sauce.

Commonly known as ‘tinda,’ it is a vegetable endemic to India and is used in Indian and Pakistani cooking. It is a green-colored, gourd-like vegetable that is used in the preparation of curry and other dishes.

The seed of this vegetable is also edible once they are properly roasted.

It is Israeli pasta and is tiny balls of toasted pasta and contains pearl-sized granules. Due to this reason, this dish is also known as pearl couscous.

It has a nutty flavor and has a chewy bite that gives it a unique taste.

It is a frozen liquid sweet snack that is served on a stick. Since ice pops are frozen at rest until they turn into solid ice blocks, they are different from ice creams.

They can be either made up of milk or water mixed with different flavors and colors.

It is an Indian dessert that is prepared by a batter of Vigna mungo flour. The batter is first deep-fried and is then dipped in sugar syrup to give it a sweet flavor.

The imarti is given a circular flower-like shape that makes it very different and unique.

Originated in Japan, Instant Noodles are a block of precooked noodles sold along with flavored seasonings and seasoned oil. The noodles are dried, and before consumption, they must be boiled along with the seasonings.

These noodles are also known as Instant ramen and are also sold in cups. 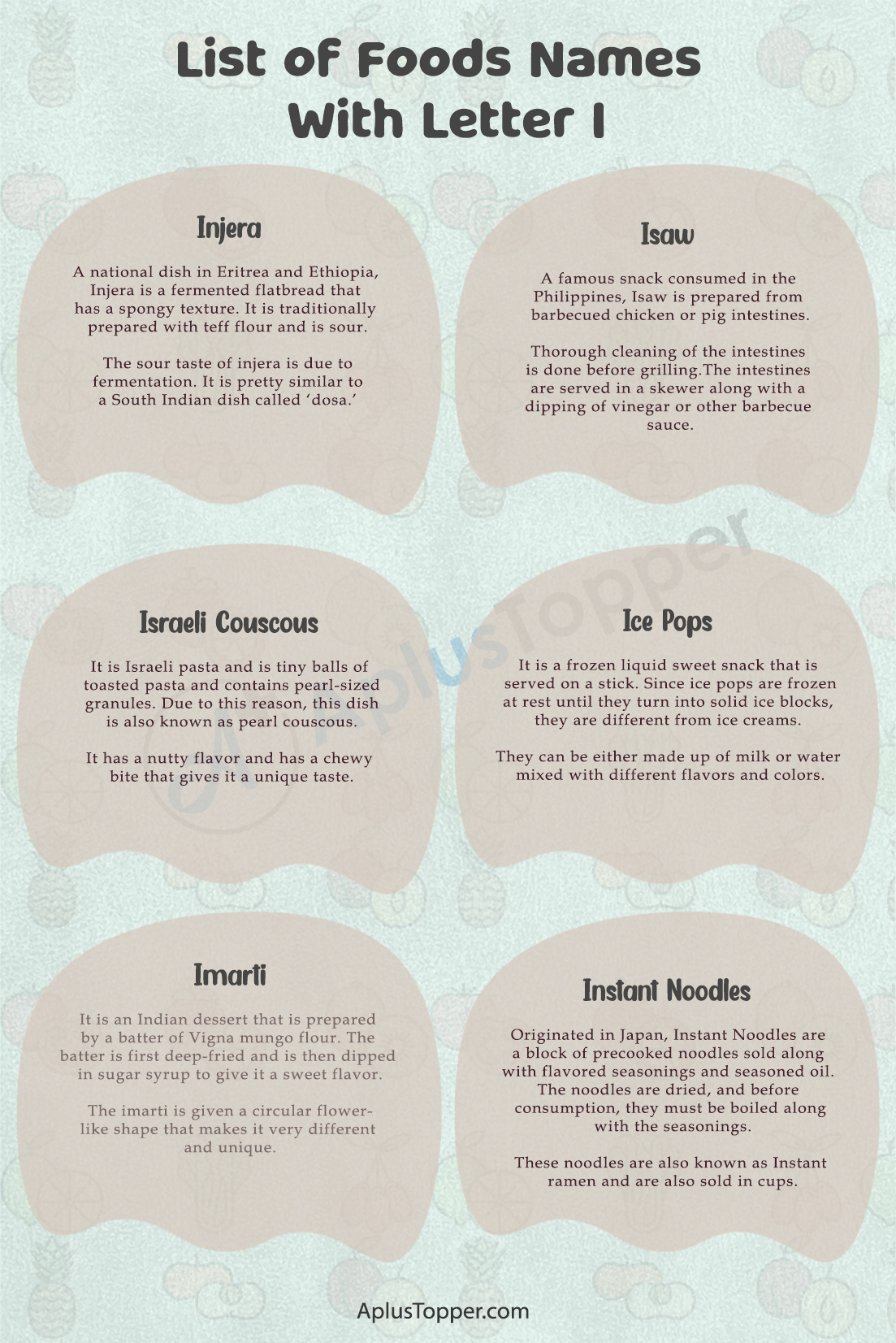 Being a national cuisine of Iceland, Icelandic Shark comprises a Greenland shark or other sleeper shark. They are cured with a specific process of fermentation and are dried for four to five months.

This dish is also known as Hákarl, and after fermentation, it gives a fishy taste. This fermented Shark is eaten all year round and is readily available in the stores of Iceland.

These are a type of frozen dessert made up of ice cream or chocolate. They are small in size but big enough to satisfy a sweet tooth after a full dinner.

Italian kisses must be frosty and cold when served and must be consumed immediately to prevent melting the ice cream or chocolate.