Foods that Start with B: There are a vast variety of foods available on this planet that we consume almost every day in our daily lives. It is difficult to remember each food item when trying to keep track of them. Hence we have made a list of food items for your convenience in alphabetical order.

Names of Foods Whose Name Starts With B

List of Foods Names With Letter B At The Start

Fascinating Facts On Foods That Start With B

Bacon is a part of the pork belly. It is thin curly strips cut out from the minimum fat portion of the pork belly. Bacon is used in various dishes either as a side dish preparation or as the filling in sandwiches. It is most commonly used in Australia, America, UK, Japan, Germany, and Ireland.

It is a prevalent Polish dish. It was first used in the 17th century in Poland by the Jew population. Bagel is a bread made with yeast dough with a hole in between, making them look like donuts. They are boiled in water first, then baked and garnished with sesame or poppy seeds.

It is a native vine grown in tropical climates such as Asia, Africa, Australia, Northern, and Southern America. They are sweet, bright orangish in color and have seeds inside them. Their outer covering has blunt warts on them.

Barbecue is a very prevalent and popular method of cooking. It primarily involves the use of fire and smoke (charcoal) to prepare the dish. Barbecue is closely related to grilling meat or fish. It uses a prolonged cooking method with direct heat application. We can use both meat and vegetables in barbecues.

They are a type of shrub grown in most temperate regions such as Europe, Northern America, Africa, Central Asia. They are deciduous shrubs and can be consumed as fruits. Some varieties have spines on their stems.

Barley is a primary cereal grain that is grown in areas with a neutral or temperate climate. It is grown globally and, most importantly, in Eurasia. Barley is a grain of the grass family and serves as ingredients for beverages, soup, stew, and bread flour.

Banana is a world-famous edible fruit grown everywhere in the world. It has different varieties that differ in size, color, and taste. Bananas find usage in salads, sweets, beverages, desserts and are consumed on their own as sweet and filling fruit. It is rich in potassium and has various health benefits. 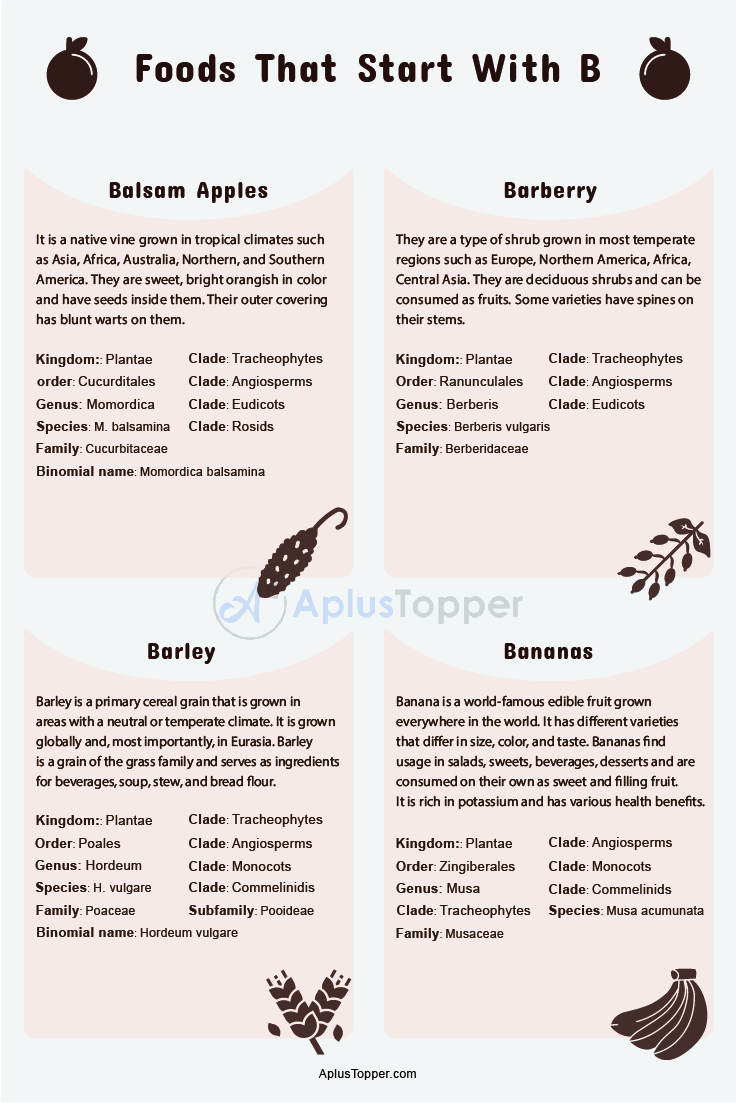 It is a frequently used herb common in many dishes. It is alternatively called great basil and belongs to the family Lamiaceae or mint. It is mainly grown in tropical climates such as South-Eastern Asia.

It is a flowering plant producing fruits, which we call beans. They are of a wide variety of types available all around the world. They are used as vegetables and have many different ways of preparation. The most common ones are Lentils and Cajanus.

Beef is the name given to edible meat obtained from cows. They have various parts which are utilized for multiple dishes worldwide. It is a significant meat source for non-vegetarians and can be cooked according to one’s wish. The major beef exporting countries of the world are Australia, the US, and Brazil.

Beets are a common vegetable for individuals around the world. Beets can be had in various ways, such as in salads, curry, juiced, or on their own. They have health benefits and are the taproot portion of the plant.

Bell peppers are a common food source for people worldwide. They are the fruit of the plant and are available in a variety of colors. Bell peppers are a native vegetable to Mexico, Spain, America, India, and Hungary. They are grown in areas with moist climatic conditions.

Black-colored mulberries are known as blackberry. They are fruits of a flowering plant that is cultivated in various places worldwide. They are reddish in color and turn black with time. 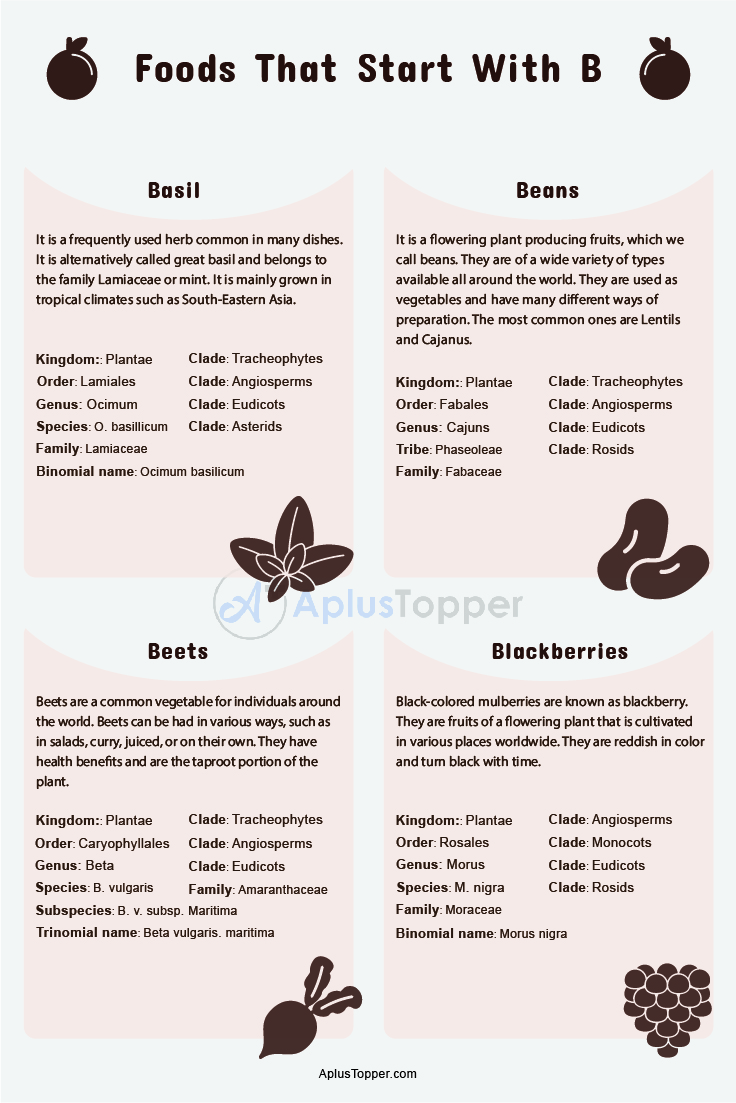 They are a species of deciduous shrubs that bear black fruits that are sweet to taste. These are from the Prunus genus and are known as wild black cherries. They are widely cultivated in regions of Eurasia, Northern America, and Southern America.

Blackcurrants are edible berries produced from a type of deciduous shrub grown in temperate regions such as parts of Northern Europe and Asia. Blackcurrants grow best in damp, fertile soil during the summers and winters.

Blue-colored berries are known as blueberry. They are fruits of a flowering plant of the Vaccinium genus, which is cultivated in various places worldwide. They are a lowbush type of berry that grows up to a height of 13 feet.

It is a food item prepared from the dough by mixing flour and water. Bread is a typical staple food in many countries around the world. To make the dough rise, people use yeast or sometimes yogurt that forms air bubbles to give it a fluffy texture.

Broccoli is a green vegetable belonging to the cabbage family. It is the flower of the broccoli stalk, which is dark green and is utilized in various dishes. Broccoli resembles cauliflower and is a good source of vital vitamins like Vitamin K and Vitamin C.

Brussel Sprouts are tiny edible cabbage-like buds that have a maximum size of about 4 cm. They are the most famous in Belgium in the Brussels region.

Hamburger is a go-to snack that has gained worldwide attention since the 1884’s. It is a compact sandwich consisting of two bread loaves packed with meat filling, cheese, and green veggies. It is a filling snack and can be customized according to people’s own tastes.