Feminism Essay: Feminism is defined as a social and political movement that advocates for women’s rights on the grounds of equality of sexes. Feminism in no way denies the biological differences between the sexes but demands equality in opportunity social, political and economic arenas.

We are providing students with essay samples on a long essay of 500 words and a short essay of 150 words on the topic Feminism.

French philosopher and a utopian socialist Charles Fourier coined the term “Feminism” in the year 1837. The history of modern western Feminism consists of four distinct waves.

The first wave began in the 19th and 20th century for women’s suffrage movement and advocating for women’s right to vote. It specifically began in the UK and US and led to the passing of several laws.

It marked the equality in marriage, parenting and property with laws like the Custody of Infants Act 1839, Married women’s Property Act in 1870 in the UK.

The second wave comprised pf the women’s liberation movement of the 1960s, where campaigns were held demanding legal and social equality of women. Though more attention was paid to women empowerment in the European countries, women still had very few rights of their own.

They still required the permission of their husbands to work and earn. Simon De Beauvoir’s book, “The Second Sex” provided a Marxist solution to this dependency on Patriarchy, thus leading to the second wave of Feminism.

The third wave was mostly focused on the individual and personal developments of women to become more independent and confident. It also brought in focus the constricted views of Feminism which focused mainly on the upper class and middle-class western whites and their outlook of life.

This paved the way for a more inclusive set of ideologies like Black Feminism and Interracial Feminism.

The fourth and the latest wave of the twenty-first-century Feminism is directed towards curbing of sexual harassment, abuses and more importantly rape cases. One of the most important movements of the fourth wave of Feminism is the #MeToo Movement.

You can now access more Essay Writing on this topic and many more. The feminist ideology is varied and has a vast spectrum of action. Hence, it is required for different kinds of Feminism to develop a more focused outlook on certain sections. The kinds of Feminism are- 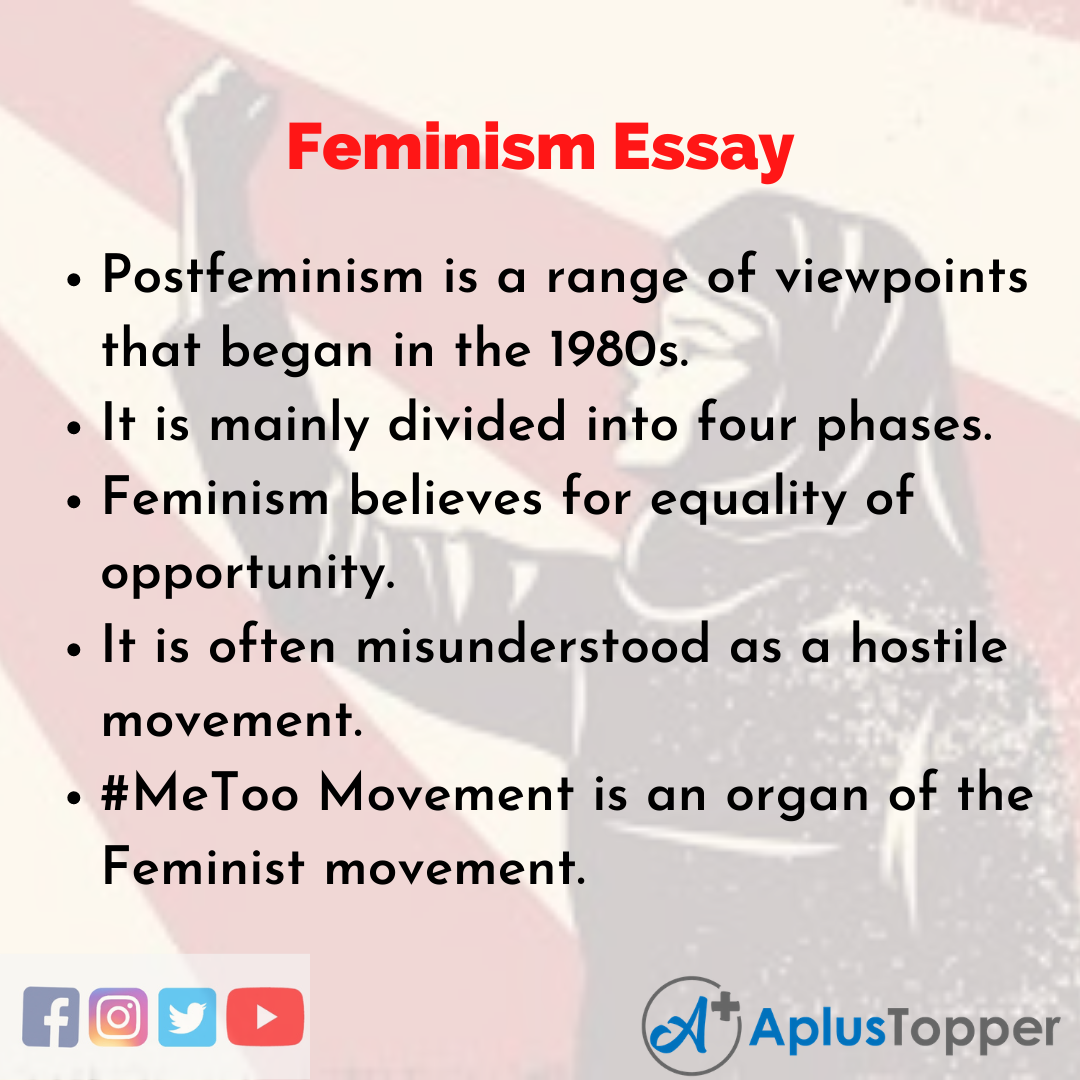 The ideology of Feminism is a movement initiated in the 19th century advocating for Women’s rights on the grounds of equality of sexes. It demands equality of opportunity of every gender irrespective of their biological differences.

The movement is distinctly divided into four waves. The first wave was the wave of movements that led to the voting rights for women. The second wave began during the civil liberty movement of the 1960s.

The third wave focused on individuality and personal liberty and was against the constricted Feminism of the upper class and pave the way for black Feminism and interracial Feminism.

The fourth and the most recent movement is focused upon addressing sexual harassment and rape cases.

Feminism can be divided into different kinds. The different types of Feminism are-

Modern-Day Feminism is no more restricted to women empowerment but also has extended its hands towards the LGBTQ+ community.

10 Lines on Feminism Essay in English

1. Postfeminism is a range of viewpoints that began in the 1980s.
2. It is mainly divided into four phases.
3. Feminism believes for equality of opportunity.
4. It is often misunderstood as a hostile movement.
5. #MeToo Movement is an organ of the Feminist movement.
6. Feminism believes in a woman’s right to sexual autonomy.
7. Some notable Feminist are-Virginia Wolf, Emma Watson, Malala Yousufzai.
8. Feminism is not essentially a woman’s movement only but a movement for all genders.
9. “Pseudo Feminism” is a term often called to the constricted Feminist viewpoint.
10. Feminism is a basic Human Rights movement in today’s world. 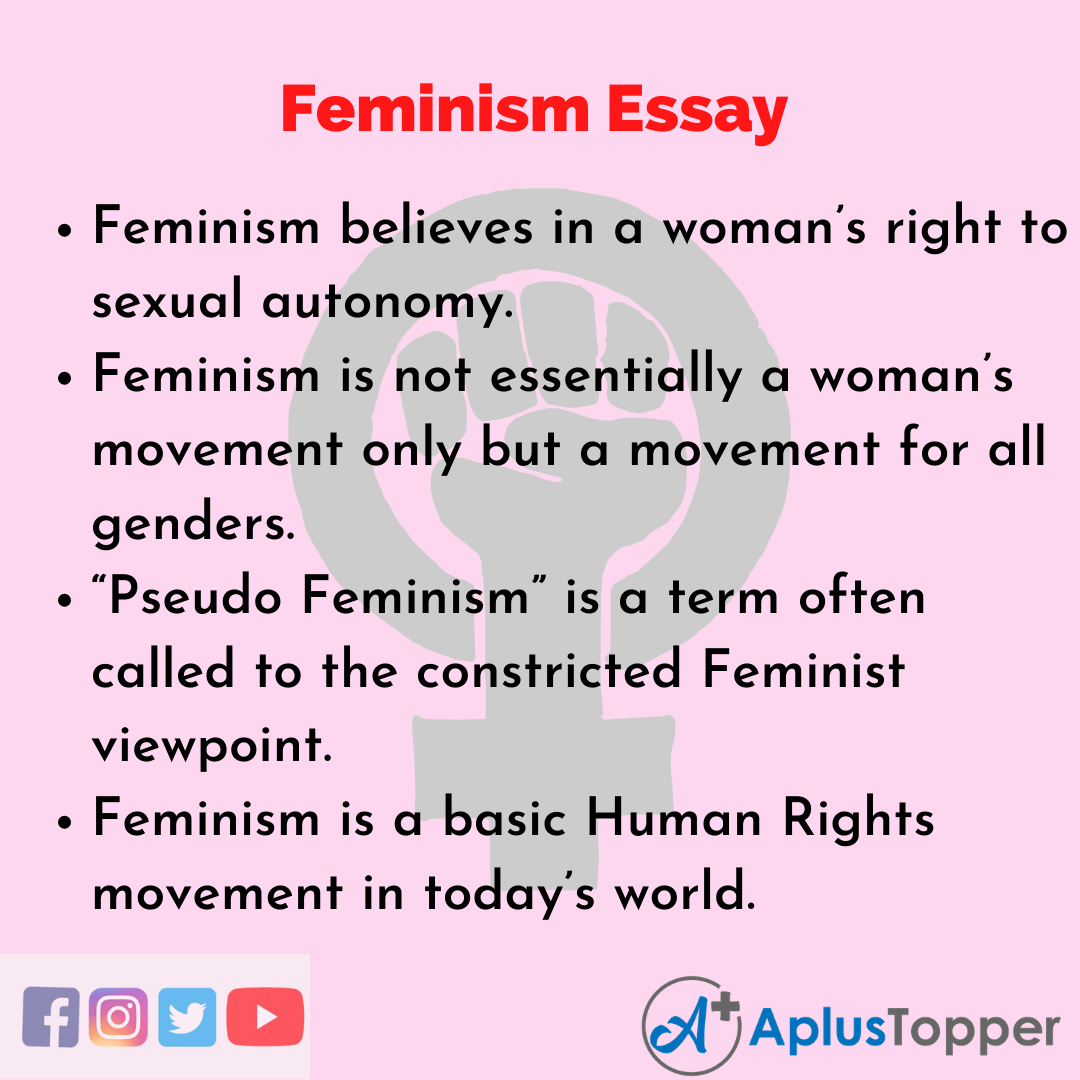 Question 1.
Is Feminism only for women?

Answer:
No, Feminism ensures equal rights for everyone irrespective of their gender.

Question 2.
Can men be Feminists too?

Answer:
Absolutely, yes. It is open for anyone who believes in equality.

Question 3.
Is Feminism against Men?

Answer:
No, Feminism is against Patriarchy and not individual men.

Answer:
No, Feminism advocates for equal rights of all genders and doesn’t encourage the supremacy of one gender over the others.