Federalism allows the citizens to participate and also helps in the overall management of the country. Thus, the role of elections is very important in federal systems.

We are providing students with essay samples on a long essay of 500 words and a short essay of 150 words on the topic Federalism for reference.

The constitution gives delegated, implied, and inherent powers to the central administrative units, whereas certain powers are reserved for the states and local governing units. The main center can make national-level decisions, whereas the states have the power to regulate laws and orders in the various areas within the state. The need for security and a common defense system against external conflicts along with the decentralization of administrative power and unequal economic development between different units of a country may necessitate the adoption of the federal government.

Federalism plays an important role in unifying states with common cultural and historical background. The factor of geographical proximity is an important precondition for the formation of a federation. The countries must have enough economic resources to adopt the federal system.

Except for China, the seven other largest countries of the world, such as the United States of America, Canada, Brazil, Russia, Australia, Argentina, and India, have federal systems. Austria, Belgium, Ethiopia, Germany, Malaysia, Mexico, Nigeria, Pakistan, Switzerland, the UAE, and Venezuela have also adopted federalism.

On May 25th, 1787, at the Philadelphia convention, the idea of a federal system was first proposed. The advocates of the federal system were Alexander Hamilton, James Madison, and George Washington, who attempted to balance order with liberty and suggested various reasons for the formation of a federalist system which included prevention of tyranny, increasing participation in politics and functioning of the states for new ideas and developments.

In the USA, after the formation of the country and the American Civil War, the national government came into power with the rise of dual and state-centered federalism along with the origin of neo-federalism. In France, the whole plan of the federal government was to weaken the Paris central government by the division of power to major provinces during the French Revolution. In India, there is a three-tiered government structure with the Central government, state and union government, and panchayats and municipalities. An asymmetric federal system can be here with certain states getting limited autonomy.

The advantages of a federal system include diffusion of power, creating responsible state governments, managing the internal and external disputes, the involvement of the citizens, and spreading awareness about politics and also the demolition of single regulating power. Disadvantages include unequal distribution of political power, interference of states in critical policies as determined by the central government, and also internal conflicts within the states. Moreover, the positive aspects of federalism overshadow the disadvantages. 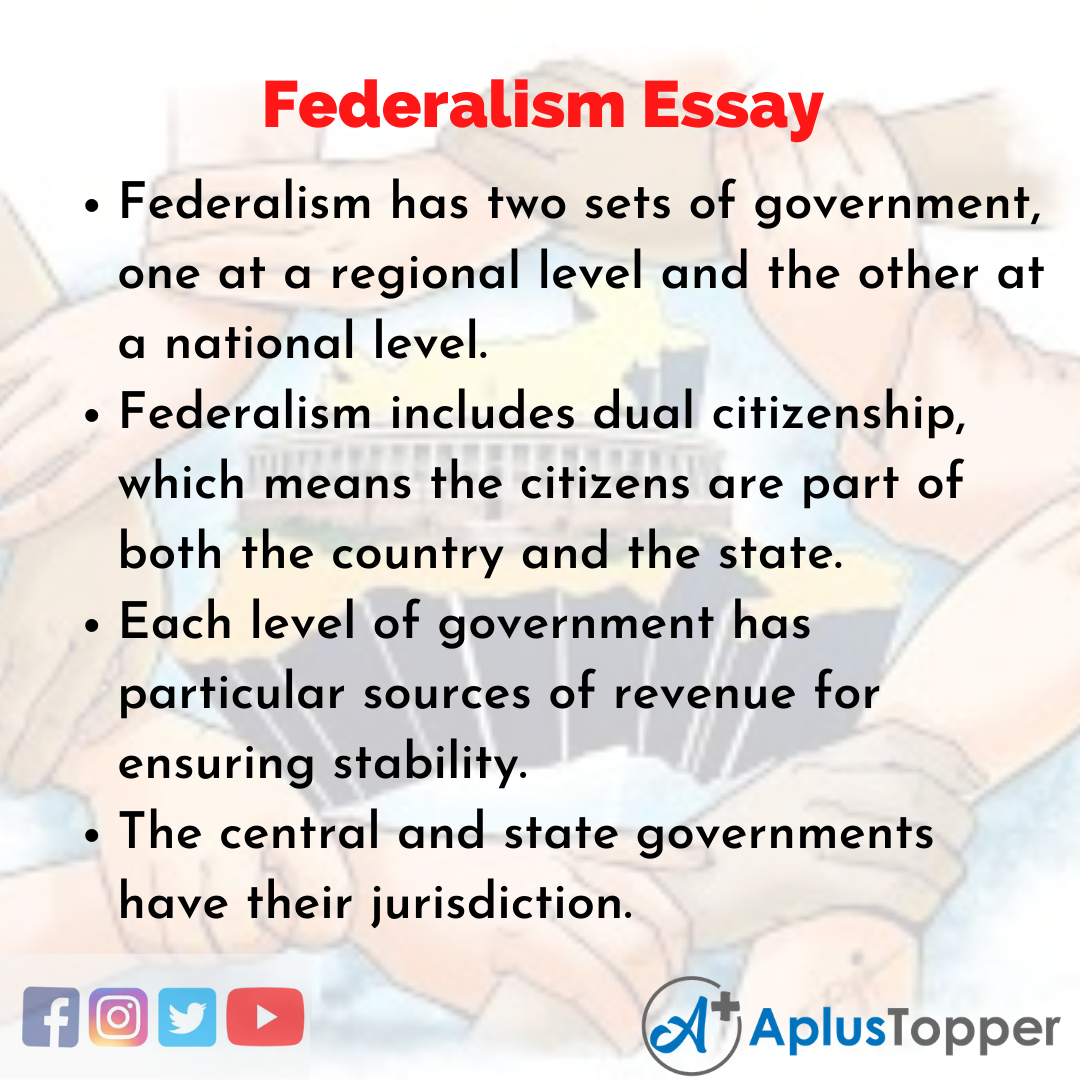 Federalism means the coexistence of a central administrative authority and state or local administrative units in their respective areas. Federalism is an important part of a nation’s political structure by allowing the governing authorities to work separately.

Federalism has a direct influence on a country’s fiscal policy, the effectiveness of the government, and economic development. It also allows provision for innovative ideas, democratic views, and unification of unprecedented powers.

Federalism allows the states to have greater freedom and take individual decisions within their respective provinces. The Central government can concentrate more on national issues and international relations. The active participation of citizens results in greater awareness about their political and civil rights with a sense of national unity. Differential state power and internal issues often worsen the federation, but the merits of federalism are way more than the demerits.

10 Lines on Federalism in English 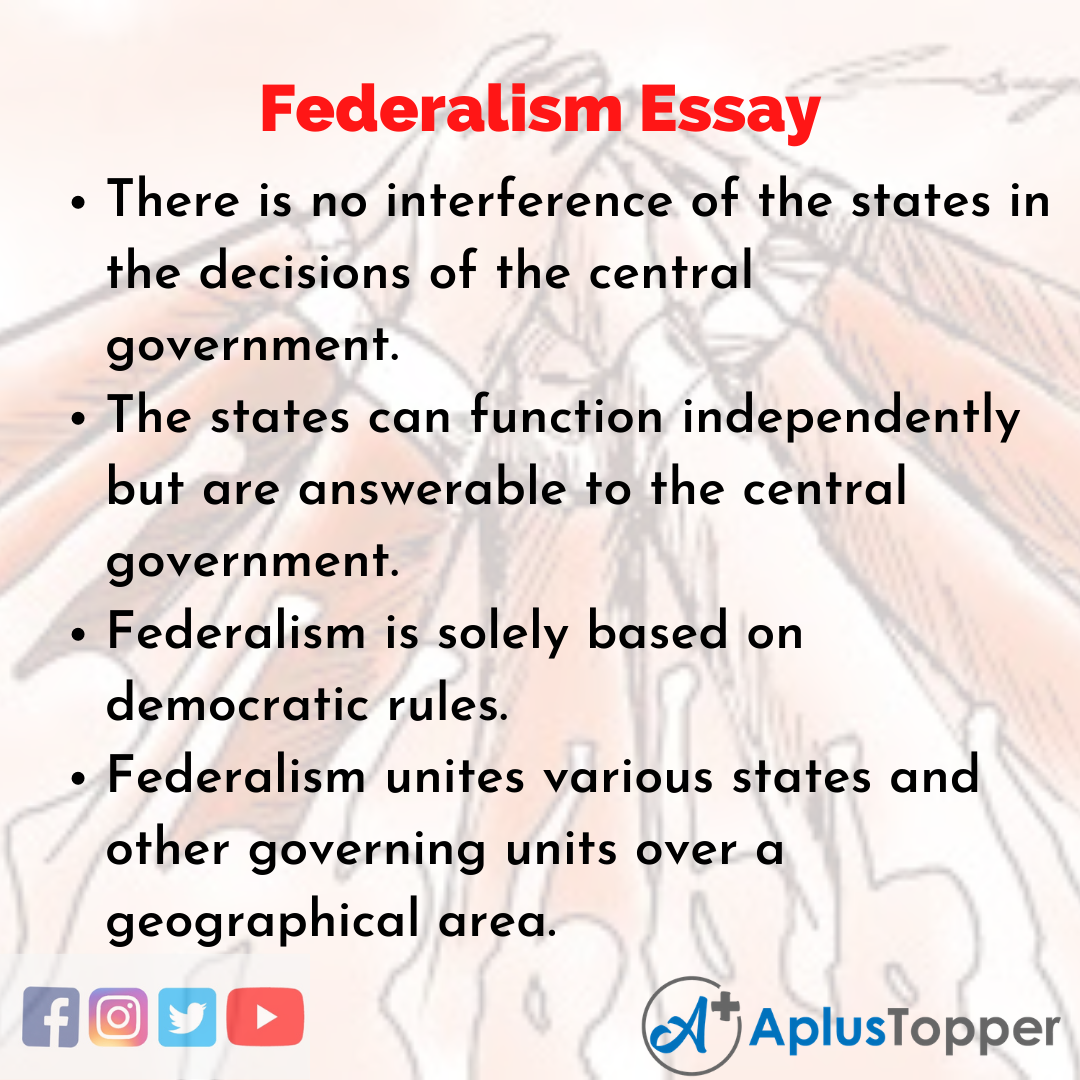 Question 1.
What is the importance of federalism?

Answer:
Federalism includes the citizens’ opinions and views are taken into consideration and balance the internal relationships within the states, and acts as a buffer to external conflicts.

Question 2.
How does federalism affect the state governments?

Answer:
The boon of federalism to the state and local governments is that they can function on their own, but they have to compromise as certain powers are given to the central authority, and it can interfere in the state government decisions.

Question 3.
What is the effect of federalism on the Indian economy?

Answer:
All the economic reforms and various economic policymaking developments take place due to the Indian Federal system.

Question 4.
What is the effect of Covid-19 on the Indian federal system?

Answer:
The central government has implemented various new reforms in different domains of the Indian economy, although the global pandemic has been a severe threat to this federal system.