Farmer Essay: More than 15 percentage of India’s gross domestic product comes from the agricultural sector. Also, it is the agricultural sector that provides the largest employer in the country to millions of people. Given the strategic importance of this industry,  we can’t help but give massive respect to the farmers of India. In fact, the farming community knows no boundaries, the hard work and dedication of a farmer is the same, whether it’s India or the United States of America or any other country in the world. In this farmer essay, we shall be talking about the importance of farmers in India and the various challenges they face in their work.

If you are searching for a well-written Essay on Farmer, then we have provided two different essays for the same. A 600-word long Farmer Essay and a 200-word short Farmer Essay is provided below. These essays can be used by students and children of class 6, 7, 8, 9 and 10 for exams, tests, assignments and essay writing home works.

Agriculture is one of the important sectors not just in India but in the whole world. This is especially true in an agrarian country like India where farmers are considered to be equal to God. Rightly so, because without farmers there would be no food to feed our growing population in the country. Almost every one of us would starve to death if the farming community stops their work. Undoubtedly, the farmer in India is the real backbone of our country. Without him, the economy would literally come to a standstill. The skyscrapers, shopping malls, fancy cars and other luxuries that people in the urban regions enjoy today only because a farmer in rural India is getting his hands dirty and working day in and day out in the fields.

Former Prime Minister of India, Lal Bahadur Shastri rightly coined the term Jai jawan Jai Kisan to hail both farmer and a soldier. A farmer is as important to a country as a soldier. While one protects the nation against enemies and guards the citizens against bad elements, another makes sure that we never sleep hungry even for one day. The food we eat every day is because of the sweat and hard work that our farmers go through in the fields.

But just praising farmers and the farming community is not sufficient. India has one of the highest farmer suicide rates in the country. And this precedence is not taken seriously by the people of the country and is never reported in any media channels. There are various reasons why a farmer commits suicide. One might be due to lack of proper production of crops due to scanty rainfalls or unpredictable weather conditions. Governments should intervene to help farmers cope up with their losses.

Waiving off loans that are given to farmers by banks is one of the solutions to decrease farmer distress in the country. But it’s a short-term solution. Helping farmer with awareness programs about using technology to follow healthy agricultural practices and other modern methods to increase the production of crops should be done. Proper canals, dams and irrigation infrastructure should be built so that farmers can overcome the loss of unpredictable weather conditions to a certain extent, is a long term solution that governments should implement.

Another way in which farmers are taken advantage of is pricing strategy followed by the middlemen in the market. Farmers sell their produce to middlemen at an extremely low price and then middlemen sell the same product at high prices to the end consumers. Hoarding and black market of vegetables and crops are another menaces that are affecting farmers as well the consumers. Government has taken many steps to address the problems that are mentioned above in this farmer essay.

Minimum support price popularly known as MSP is a price that is guaranteed by the government for selling off the farm produce between the farmers and the market. This ensures that no middlemen will take advantage of there farmer and a minimum price is given to the farmer for his produce irrespective of any unpredictable situations.

Food Corporation of India (FCI) is an autonomous body in the country that buy crops directly from the farmers and store it in there cold storage areas for use during Emergency situations like wars or the one that we are facing now, COVID 19 pandemic. I would like to conclude by saying that the farmer and the work he does for his country is no less than the divine work. Governments should formulate proper policies and laws to take care of their needs. If we take care of his needs, only then he can take care of our needs. 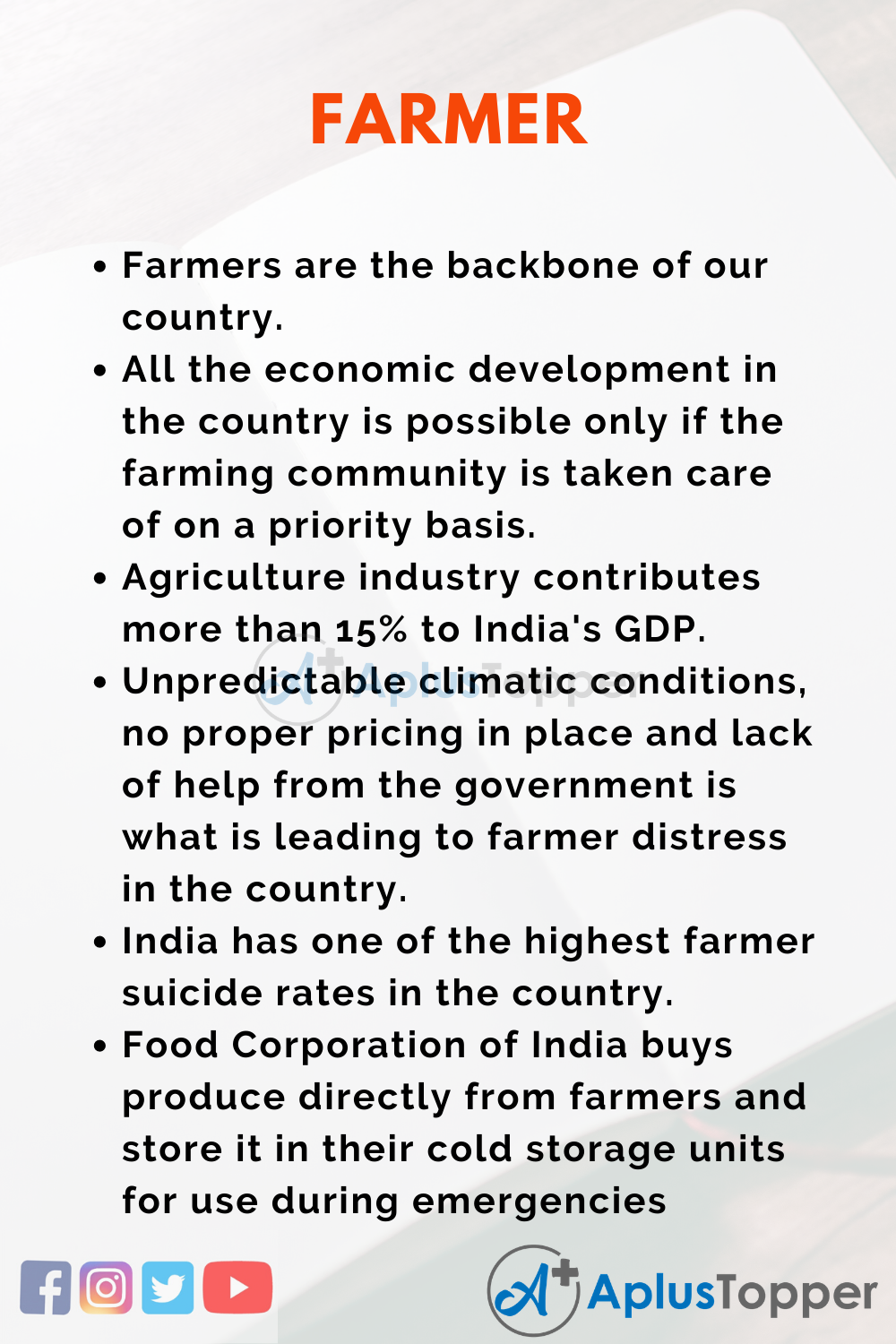 Farmers are the backbone of every country. No country can survive its economy without the help of farmers. In spite of knowing the importance of farmers, the government and people ignore the plight and difficulties that the agricultural industry faces.

From losing their produce due to unforeseen and unpredictable climatic conditions to cheating of pricing in the market to lack of proper agricultural infrastructure, the problems that our farmers faces are in plenty. As much as we spend our country’s budget on our highways and fancy buildings in urban cities to show the muscle of the capitalist economy, if we show the same interests in improving the agricultural infrastructure in the country, then India would have been the superpower of the world by now.

Nevertheless, it’s always a good time to rectify and start healing. We need to address the problems that our farmers face immediately and start finding scientific and robust long term solutions to their problems. It is not just the responsibility of the government to do this. Evey law-abiding citizen should take cognizance of the situation and help the farming community in any way possible.

10 Lines on Farmer Essay in English 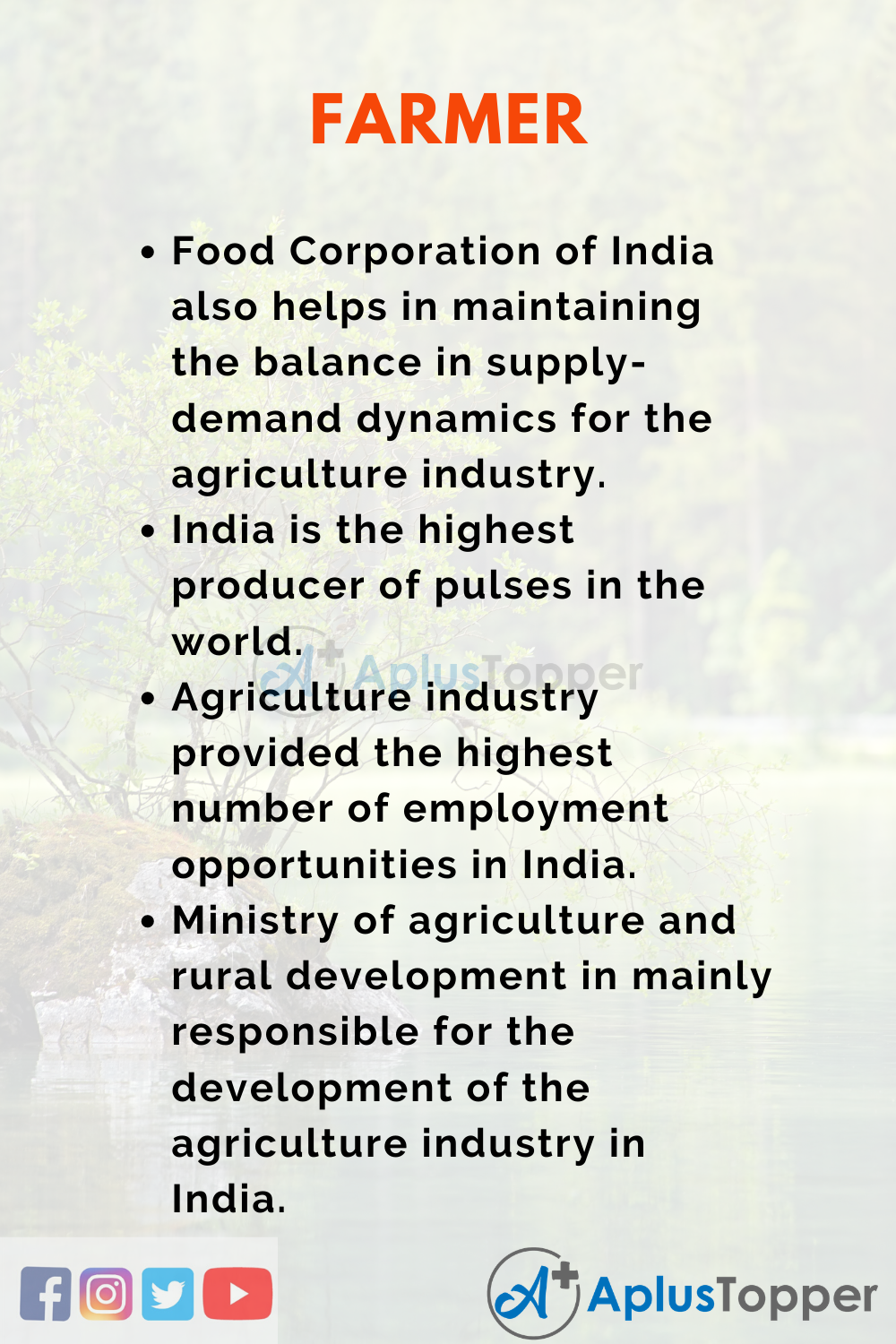 Question 1.
Who is the father of the green revolution in India?

Answer:
M.S Swaminathan is known as the father of the green revolution in India.

Question 2.
Why is farmer suicide rates high in India?

Answer:
Lack of financial support from the government during distress is a big reason for farmer suicide in India.

Question 3.
What is MSP?

Answer:
MSP stands for a Minimum Support Price. It is the price guaranteed by the government for farmer’s produce in the market.

Question 4.
What is the Food Corporation of India?

Answer:
It is an autonomous body under the central government of India that stocks and buys crops from farmers to use during an emergency. They are also responsible to maintain supply and demand balance in the sector along with maintaining the public distribution system of agricultural produce.