Fahrenheit 451 Essay: The dystopian novel named Fahrenheit 451 is one of the best works of Ray Bradbury. This novel was first published in 1953 that attracted the attention of many readers and book-critiques because of the unique perspective the book’s content provided.

The imagined plot of the novel is about American society in future where books are considered outlawed, and if by chance any books are found, then the firemen are supposed to burn it. The plot of the novel can be viewed under several subjects depending upon the interpretation of the readers.

The plot of the Fahrenheit 451 novel begins with the protagonist named Guy Montag questioning his life and believes as a fireman after meeting his free-thinking neighbour named Clarisse. Guy Montag starts questioning his life and the system after pondering over whether he was happy with his life on Clarisse asking him the same. After much thought, he realized that his job and his relationship with his wife were neither fulfilling.

Another important event in the story was of a day in Guy’s workplace when his supervisor Captain Beatty started ranting about how books are bad and the evils of reading a book. However, the Captain strangely used a lot of quotes from literature to express her passionate hatred towards books, which the protagonists found to be very ironical.

Soon after, on that same day in work, Guy came across a woman who refused to part from her collection of books and agreed to be burned in the same flames that the firemen were going to burn her books. This incident left the protagonists completely shaken and led him to steal a book from the scene of so-called ‘crime’.

After the episode in Guy Montag’s job impacted his thought, he came home and revealed his secret stash of twenty books to his wife, Mildred. He also helped Mildred reading some of them in the hopes that it would recover the hopelessness he was feeling in his life and his marriage. And to achieve this, Guy Montag also sought help from a scholar named Faber who he knew from a meeting in the park.

The plot of Fahrenheit 451 takes a pivotal turn when his wife does not share his vision of reading books by going against the law as she turned Montag in. The firemen then showed up at their house with the intentions of burning his books, however, Montag rebels by even going as far as killing Captain Beatty.

A devious invention called the Mechanical Hound was then used for hunting down Montag. Guy Montag destroyed the original mechanical hound and fled, but soon after another one was sent. The protagonist escapes to the city following the train tracks as suggested by his scholar friend Faber. He meets a group of intellectuals after his escape.

The group of intellectuals invited Guy Montag and sheltered him in the hopes of recovering the portion of the Bible that Montag had memorized. During their conversation, the city was bombed as all of them saw the city turn to ruins in front of their eyes. However, one intellectual among them claimed an optimistic view of the situation by comparing human to the phoenix that shall rise from its ashes one day.

In this dystopian novel represent the firemen play a very important role as they were like the bearers of the law imposed by the oppressing government, which is very similar to what police are in our real-life. And if as a fireman the protagonists did not question and revolted the law of banning books in the novel, then the common people would have further continued to fall prey to the oppression of the corrupt government. 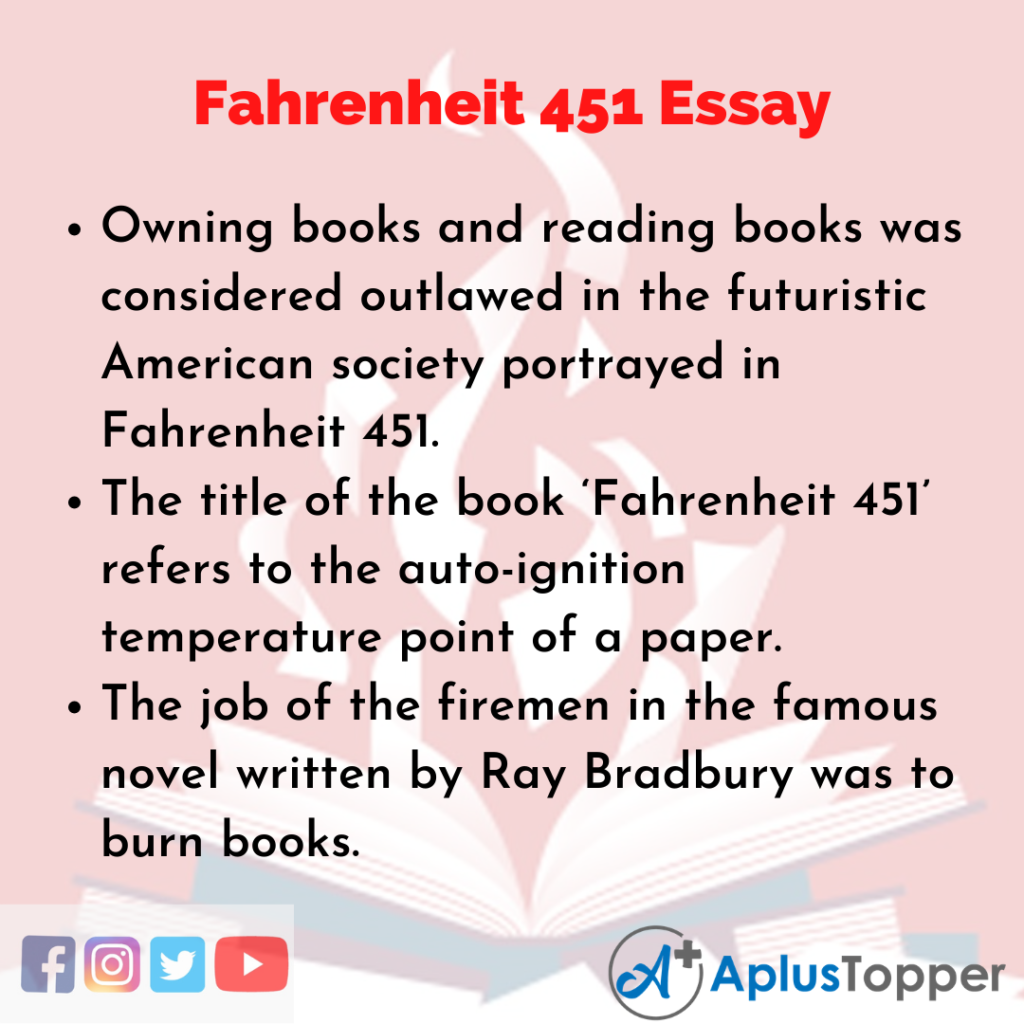 Ray Bradbury has set a milestone in classic literature after publishing his novel Fahrenheit 451. This novel is set in a dystopian world under the oppression of a government that has banned books. 451 Fahrenheit is the temperature at which book and papers burn, and that is what the title of the novel is as well.

The human misery and suffering are very prominent in the book as we come across its characters. In the Fahrenheit 451 novel’s plot, the firemen have to burn any books they find as instructed by the people in power. That is why firemen of the novel have very little in common with the firemen of the world we live in at present.

The plot expresses that the government issued the burning of books because they saw it as a threat to their position in society. This was done for reading books leads to people thinking more and questioning the system. The message that the plot of the book conveys is very strong and can vary under different perceptions.

10 Lines on Fahrenheit 451 Essay in English

1. Owning books and reading books was considered outlawed in the futuristic American society portrayed in Fahrenheit 451.
2. The title of the book ‘Fahrenheit 451’ refers to the auto-ignition temperature point of a paper.
3. The job of the firemen in the famous novel written by Ray Bradbury was to burn books.
4. Bradbury used lyrical and descriptive style for writing his book Fahrenheit 451.
5. In Fahrenheit 451 novel, Guy Montag is the lead protagonists and a fictional character.
6. In the story, Guy Montag’s age was thirty because, in the plot, it is discussed that at twenty years old, he became a fireman and held that position for a decade.
7. Guy Montag is a fireman in the futuristic dystopian plot of Fahrenheit 451 written by Ray Bradbury.
8. The Fahrenheit 451 book is very well thought for even the title of the novel signifies an important aspect of the plot.
9. The writer used several figures of speeches like similes, personification, metaphors, etc. while writing Fahrenheit 451.
10. The lie that Captain Beatty told Montag was that it was never the job of firemen to put out the fire but only to start a fire. 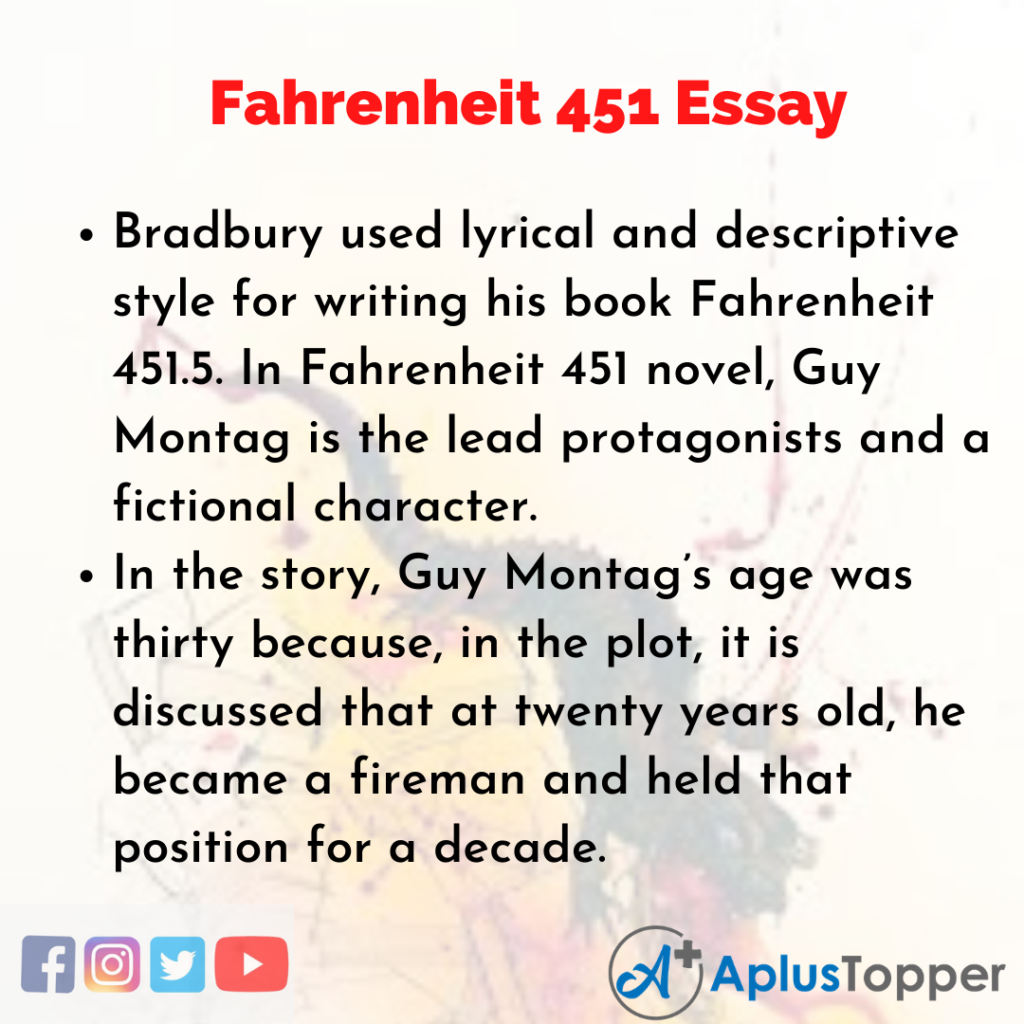 Question 1.
How did firemen get to know about the people who owned books?

Answer:
The neighbours, other family members and friends of the person owning book became the informant as they telephoned the authorities to report.

Question 2.
How did others view Clarisse?

Answer:
Clarisse was considered to be anti-social by others.

Question 3.
What was the robot modelled on for hunting and killing Montag?

Answer:
The robot was modelled upon the animal Hound.

Answer:
Clarisse was a free-thinking young girl who liked to read, think and talk.