Applied Forces
The forces that we use with our hands, legs, fingers, etc., are collectively called appliedforces. When we tie a stone to a string and suspend it, the tension in the string opposes the force of gravity of the Earth and keeps the stone from falling down. When we do work with our hands, like lifting a weight, or pulling an object, the force required is provided by the tension of our muscles. When we need to apply a force, the brain sends a signal to the muscle (in the form of electrical signals via the nerve cells), which makes the muscle contract. This is how we can apply a force with our hands, legs, etc.

Friction
The resistance to motion experienced when two surfaces in contact move with respect to each other is calledfriction. Whenever the surface of one body slides over that of another, each exerts a force on the other which opposes the motion of the body. This is called frictional force. Frictional force comes into play only when two surfaces are in physical contact and is, therefore, a contact force. Friction is a very complex phenomenon, and there is a lot about it that still needs to be explained. Two simple explanations for why friction is caused are as follows:

Observation: You will notice that different materials offer different amounts of resistance (friction) to sliding. You will see from this activity that the force of friction depends on the nature of the surfaces in contact.
Conclusion: In general, smooth surfaces offer lesser friction than rough surfaces. The reading on the spring balance will be higher for rougher surfaces.

Aim: To study the effect of mass of a body on friction.
Materials needed: A 100/200 page notebook and two or three thick books (small enough so that they can be placed on the notebook).
Method:

Aim: To show that rolling friction is less than sliding friction.
Materials needed: Two wooden examination pads/planks and 4-6 pencils of equal size and round sides (or 4-6 small marbles of equal size).
Method: 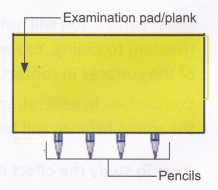 Observation: You will notice that if pencils or marbles are placed between the two pad surfaces, the friction offered is much less. This is because the pencils/marbles roll as the pads slide across each other.
Conclusion: Rolling friction is less than sliding friction.