Ethics Essay: The world is beset with falsified ideologies, with people who want to exploit each other in the fields of education, business, politics. Therefore, it is of paramount importance that in addition to the rule of law, some guiding principles as to how we must conduct ourselves in society and our institutions must be set.

Throughout history, from the time of Greek philosophers like Aristotle, mankind has genuinely wondered about the topic of ethics and tried to derive universal moral principles governing behavior. Our modern understanding of ethics can help us create a better world by becoming better and more caring citizens.

Ethics are basic standards or ideals that regulate the actions of a person or a community. This is not a responsibility to bear, but a wise and successful guide to existence and progress. Ethics is essential in business, as well as in academic institutions and social structures because it is a crucial cornerstone on which an enlightened system is built.

It is often not the same to be following legal rules and being ethical. Law, like, emotions, will deviate from what’s moral. The practice of sati in India and the abhorrent rules governing apartheid and slavery in South Africa are examples of laws and customs which are not ethical.

Being ethical is not similar to following “whatever the predominant culture allows.” In every community, most citizens follow values that are, in essence, ethical. But behavioral standards in society can deviate from moral standards. Culture, as a whole, may become immoral and unethical. Nazi Germany is a perfect example of a culture that is politically compromised.

Academic dishonesty is yet another component of unethical conduct. It is a behavior or an attempt that involves the creation of an unfair academic benefit for oneself or a disadvantage for any other representative of the educational institutions.

The family has a powerful impact on one’s beliefs and actions, parents create guidelines from the beginning, and they are the foundation of our ethics and morals. Devotion to individual values is part of what makes a student effective. Lack of ethical dedication will always lead to academic incompetence.

Social principles and social standards have declined over time. As a consequence, the number of crimes such as killings, robberies, gang assaults, kidnappings, extortion, grab and run cases, and criminal activities such as vandalism, hoarding, substance trafficking, etc. has increased in just some very few years. Learning and astuteness have taken the shape of ambition, envy, destructive rivalry, and the lure of quick income, which is entirely counterproductive to a stable and safe social existence.

Citizens have lost faith and been greedy in their purposes, and thus, in people’s lives, principles and morals have diminished and lost meaning. An individual with ethical values is interested in the right actions, and he also knows it internally. The individual doing evil acts at the same time may sometimes consider it correct to adjust to the social structure in which he or she lives but has terrible morals.

If a person’s moral and ethical values have plummeted, he or she will never feel any guilt or anxiety in executing misdeeds or even a severe offense, as is suitable to his or her morals and ethics. Much of the time, it is the context and the way an individual is raised that determines his acts and, thus, his morals and ethics.

If we’re to see a world with a relatively low rate of violent crime and where all human beings can reside peacefully, we need to look at the values and ethics that our sculptures and religious leaders teach. We will shoulder the pressure of making our world and, in turn, transform our planet into a beautiful place where all human beings will lead a life with integrity and dignity without terror in their minds. 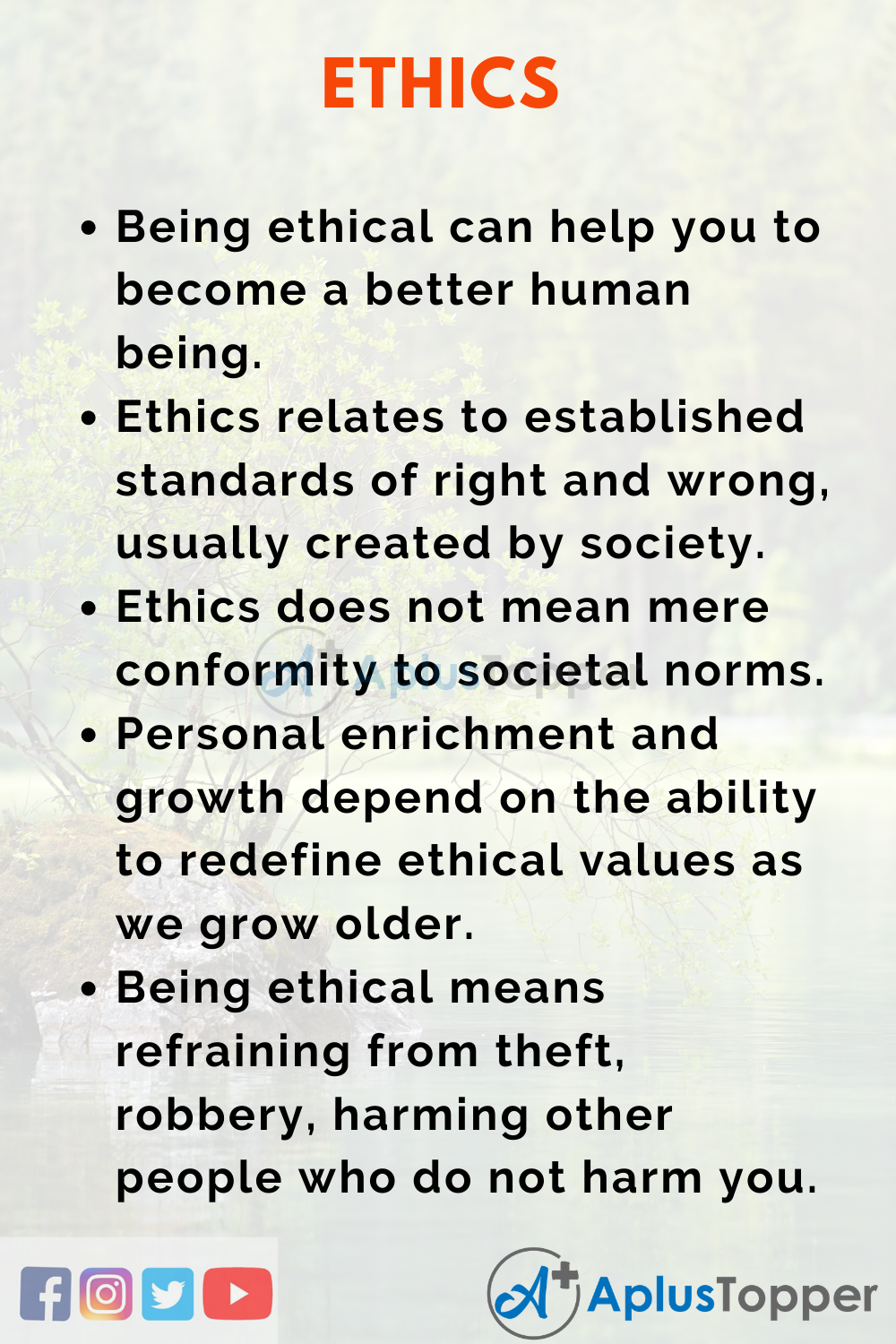 Ethics can be defined as established standards of right and wrong that prescribe what people should do, usually in terms of human rights, responsibilities, advantages to social order, honesty, or specific core values. Ethical principles also include those which enjoin the values of authenticity, justice, and integrity. Ethics involves the demands for personal freedom, liberty, and the right to free will and privacy. These principles are acceptable ethical guidelines as a clear and well-founded reason backs them. Ethics also requires a constant attempt to research our spiritual values and moral behavior and to try to guarantee that we, and the organizations we help form, perform up to expectations that are fair and ethical

10 Lines on Ethics Essay in English 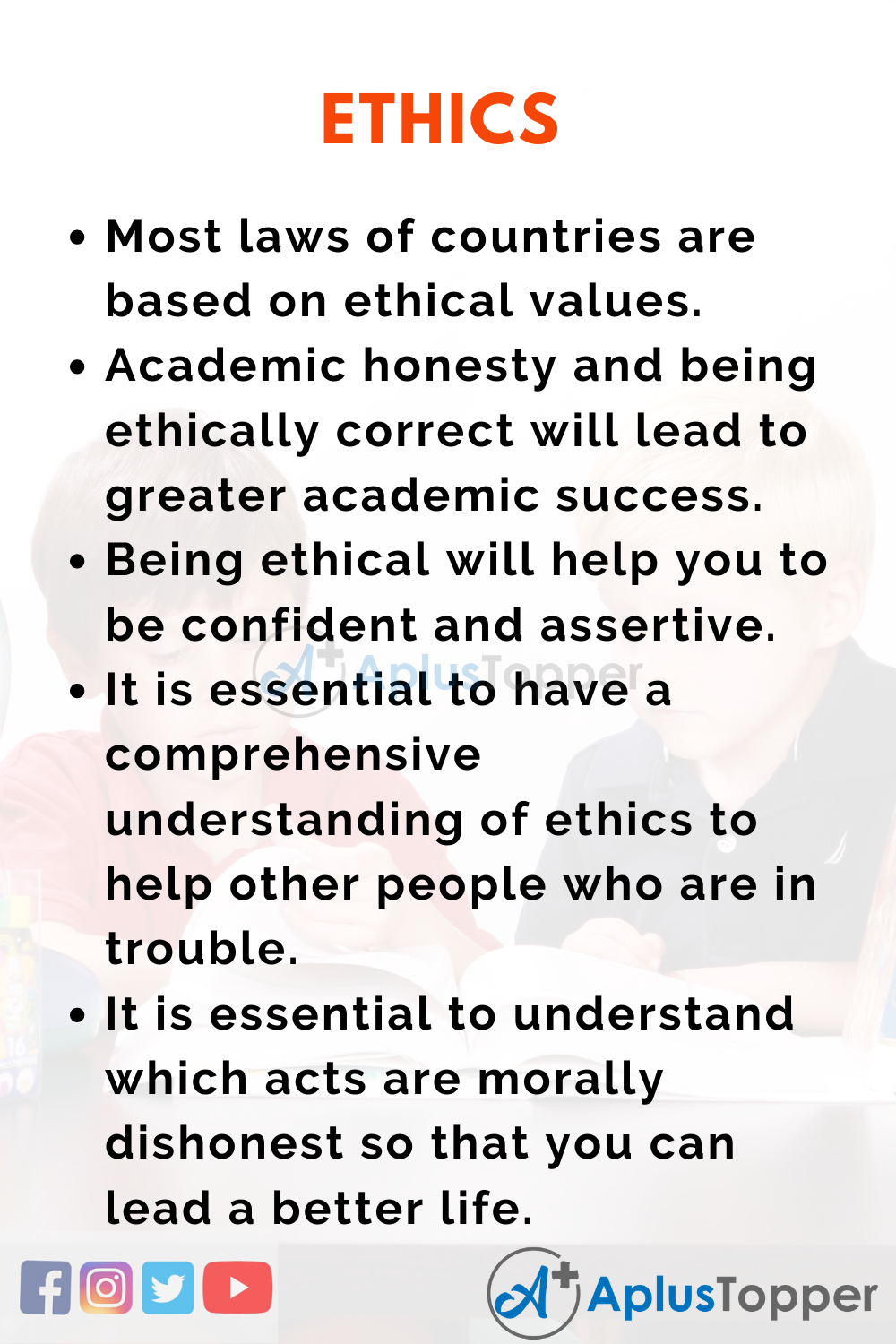 Answer:
Some laws are regressive and discriminatory against women, religions, communities. Such acts are ethically or morally wrong. Therefore, ethics refers to analyzing the basis behind laws and understanding whether they are right or wrong.

Question 2.
How can you be ethical?

Answer:
You can be ethical by refraining from dishonest acts like stealing, looting, cheating, and being truthful to yourself and others.

Question 3.
Is being ethical important?

Answer:
Yes, being ethical is important. With ethics comes self-respect and self-esteem. It is an integral part.