Essay on Zoo: Other creatures inhabit the world besides humans. The planet consists of so many other living organisms which you will hardly get a chance to see. Humans are fascinated by all animals. This the reason that zoos we made so that humans have an opportunity of interacting with them.

We can define a zoo as a place where animals, birds, and insects live. The animals that live in the Zoo are provided with food and medical facilities. Every Zoo functions according to the rules and regulations set down by the government. All the laws and regulations are for delivering safety to animals.

In the next section, you will find two essays on Zoo, one of the pieces is a long essay of 400-500 words. Another Essay is a short essay of 200 words. Both articles are in English.

The extended essay on zoo is suitable for students of classes 7,8,9 and 10 and competitive exam aspirants.

The Zoo is the place that animals, birds, and insects of all kinds live. The people working in the Zoo provide the animals with food and medical help. A zoo functions according to the regulations laid down by the government of the country.

Another purpose of having a zoo is that it is a place where the species can grow. It’s a breeding ground for the inhabitants of the zoos. Hence, it protects its species.

The Zoo is one of how humans can come closer to the animals. Humans have a closer and better view of the inhabitants of the zoos.

Another way zoos helped humans was that it gave the scientists a way to research various things like the behavioral pattern of the animals. It is a chance for humans to understand and discover new things about the animals which live in the Zoo.

All kids love animals and want to see them live. Zoos are something that fulfills this wish of theirs. Children can see the animals in front of them and learn more about all the animals. It’s the perfect chance for kids to learn about wildlife and increases their knowledge.

While seeing the rare animals, you can learn many things about them. You can learn their origin and which is the best place for them to live. Another thing you learn is why these animals are extinct and how these species are—being protected.

Zoos are the perfect place for animals to increase their species. The Zoos serve as a breeding ground for the inhabitants of the Zoo. Breeding grounds helps the species so that they never go extinct. It creates the right balance for the animal.

The zoos provide animals with proper nutrition and healthy life. They do this by providing meals for the animals regularly, which gives them strength and nourishment. It is very beneficial because, in the wild, they wouldn’t get a guaranteed meal.

Animals shouldn’t be put in cages for the entertainment of humans. A man moves these animals from their natural habitat. It’s all done so that humans can get a look at the animals.

A zoo is a place where people keep animals and make a profit out of them. Conditions of the zoos are not right. The authority which is in charge of the Zoo uses unethical ways to generate revenues.

Zoos are not the place to take care of exotic animals. All animals need to live in a climate that suits them. 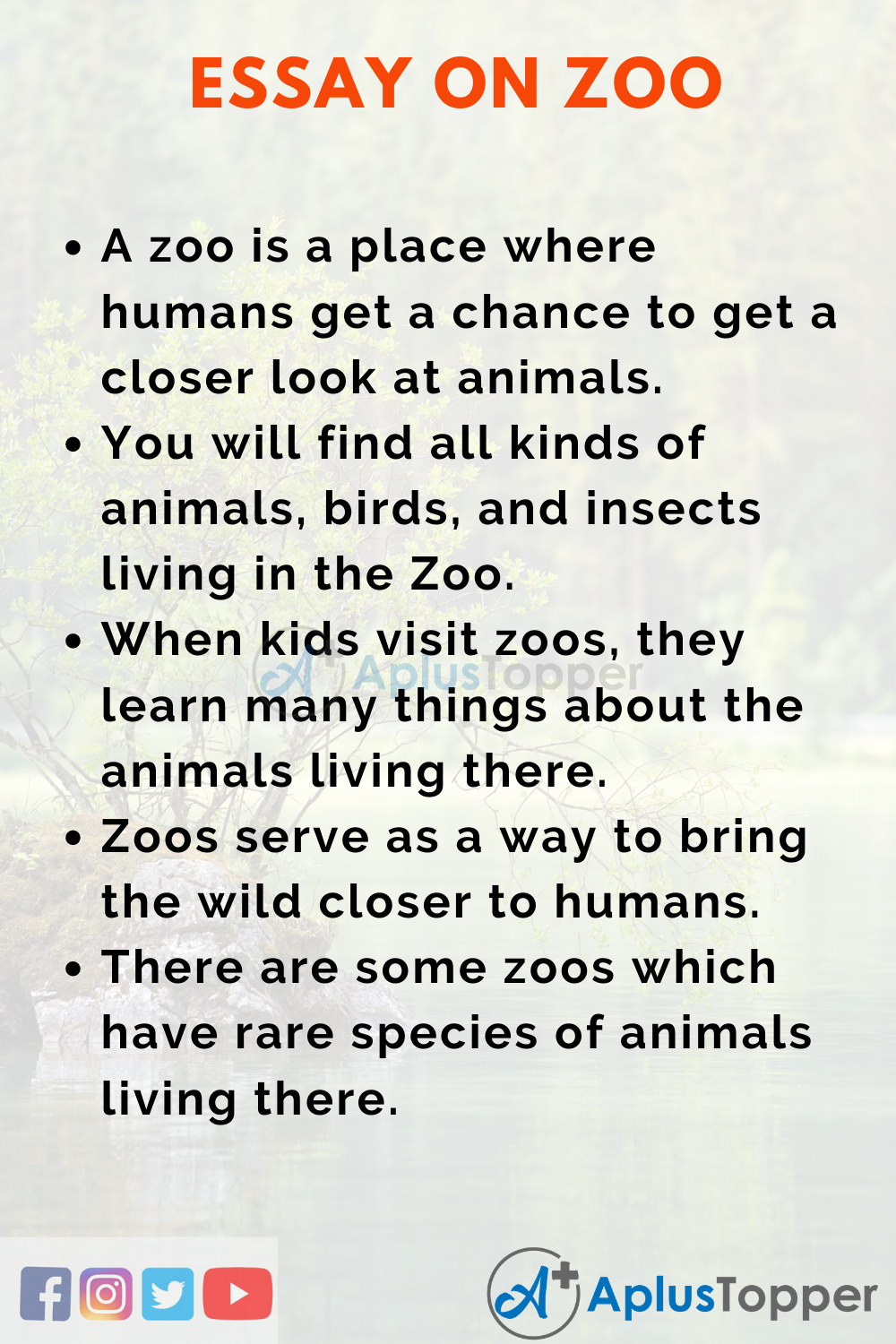 Zoos are places where you can see animals, insects, and birds. It is a chance for humans to see the other inhabitants of the planet.

It is a place where humans can learn various things about the animals and their species. Many zoos have rare species of animals living there. Humans can learn about the endangered species and the reasons why it is threatened.

The Zoo has many drawbacks. It’s not the place to keep exotic animals. Individual animals can survive a particular climate and can’t survive anywhere else. Zoos bring the exotic animals to sites which don’t have the ideal condition for the animals yo survive.

Many zoos don’t take enough precautionary measures. They are reckless in the way they treat the animals, which results in death. It is a cruel way to treat animals.

Zoos are good for animals to a certain extent. The authorities need to take proper care of the animals and ensure that all the animals are safe and sound.

10 Lines On Zoo Essay in English

Given below are ten lines that are suitable for students appearing for competitive exams and while making speeches. 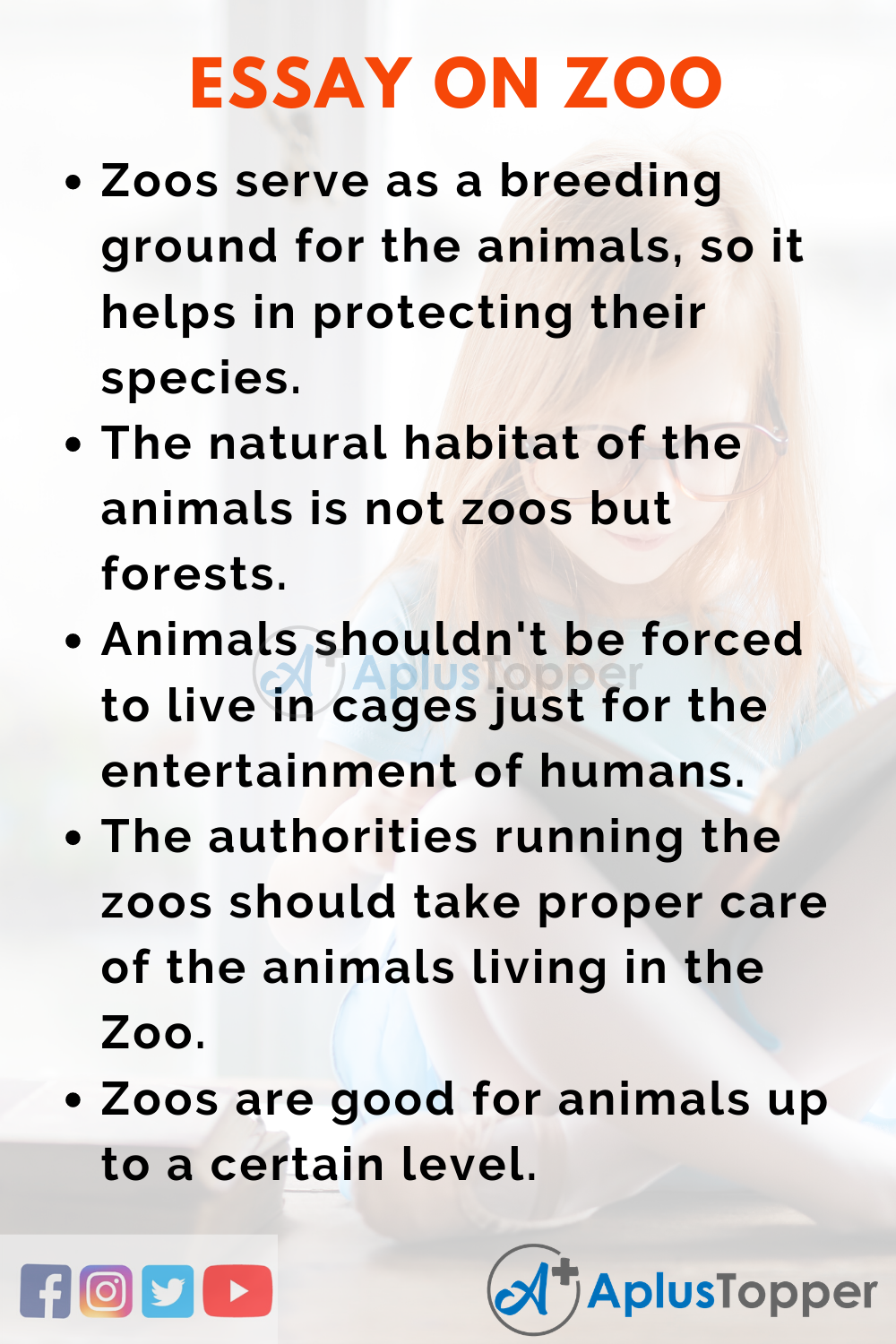 FAQ’s on Essay on Zoo

Question 1.
What are zoos?

Answer:
Zoos are places where many animals, birds, and insects live, bringing humans closer to animals.

Question 2.
Give one benefit of a zoo.

Answer:
When animals live in zoos, they are provided with meals regularly and get medical proper medical attention.

Question 3.
What are the disadvantages of zoos?

Answer:
There are several disadvantages to zoos. One of the problems of zoos is that it is not the natural habitat of the animals.