Essay on William Shakespeare: The Bard of Avon who produced some of the most impressive works of English literature is the genius, William Shakespeare. The complete works of Shakespeare being so voluminous and extraordinary has also raised several speculations regarding the true origin of these works many years ago.

It is quite hard to swallow the idea of one individual producing about 38 plays, 154 sonnets, two narrative poems and a few other verses which are all almost universally recognized as some of the greatest works in the history of literature. Some of the famous plays under Shakespeare’s authorship are Romeo and Juliet, Macbeth, Hamlet, Othello, King Lear, Julius Caesar, The Comedy of Errors, etc.

We are providing students with a sample of long essay on 500 words and a short essay of 150 words on the topic William Shakespeare in English for reference.

Long Essay on William Shakespeare is usually given to classes 7, 8, 9, and 10.

Shakespeare is the world’s pre-eminent dramatists and is till date regarded as the greatest writer in the English language. It is because of the brilliance of Shakespeare’s writing skill that he was often called England’s National Poet and was also nicknamed as the Bard of Avon.

He was born in Stratford-upon-Avon to a successful businessman on 23rd April in the year 1564. Shakespeare’s mother was also from a well-to-do family for she was a landowner’s daughter. About the age of seven, William Shakespeare, along with other boys of his social class, started attending the Stratford Grammar School.

The teachers at Stratford were strict disciplinarians, and the school was conducted round the year for nine hours a day. William Shakespeare’s evident love for nature in his writings could be said to have been influenced by the fields and woods surrounding the Stratford Grammar School throughout his childhood.

Warwickshire was an exciting place to live in as the writer then also engaged in hunting and trap small game activities. It was because of the river Avon that ran down through the town was what endowed Shakespeare with the title ‘Bard of Avon’. It was at the age of eighteen when Shakespeare married Anne Hathaway, who was eight years older than him. They had three children named Susanna, and the twins Judith and Hamnet.

William Shakespeare’s career likely took off with his theatrical life in London, and by the year 1592, he is believed to have become very well known. By this time, Shakespeare had joined one of the famous theatre companies in the city. The theatre companies then used to consist of a permanent cast of actors who week after week presented plays. The acting companies in London that William Shakespeare belonged to was called ‘the Lord Chamberlain’s Men’ which scholars say to be one of the most popular acting companies of that time. These companies were commercial organizations which depended upon the admission from the audience who came to watch the play.

From the year 1594, Shakespeare was the leading member of the acting group for almost the entire rest of his career. By the year 1594, William Shakespeare had already produced at least six plays. In Shakespeare’s lifetime, two monarchs had ruled over England. The first monarch being Henry VIII and then later succeeding him Queen Elizabeth began her rule. Shakespeare’s work had caught both the monarchs’ attention, and this is what made him a well-known playwright.

It is evident that Shakespeare was a member of a well-known travelling theatre group and did plays in many places and the presence of many dignitaries. Shakespeare became one of the owners of the popular and prosperous Globe Theatre in the year 1599. By the year 1609, he also became the part-owner of the Black Friars Theatre.

Shakespeare, throughout his life, created brilliant pieces of English literate containing timeless characters with universal human qualities and struggles that readers find relatable to date. It was around 1613 when Shakespeare retired from this acting profession and settled in Stratford where he went on writing many excellent plays. 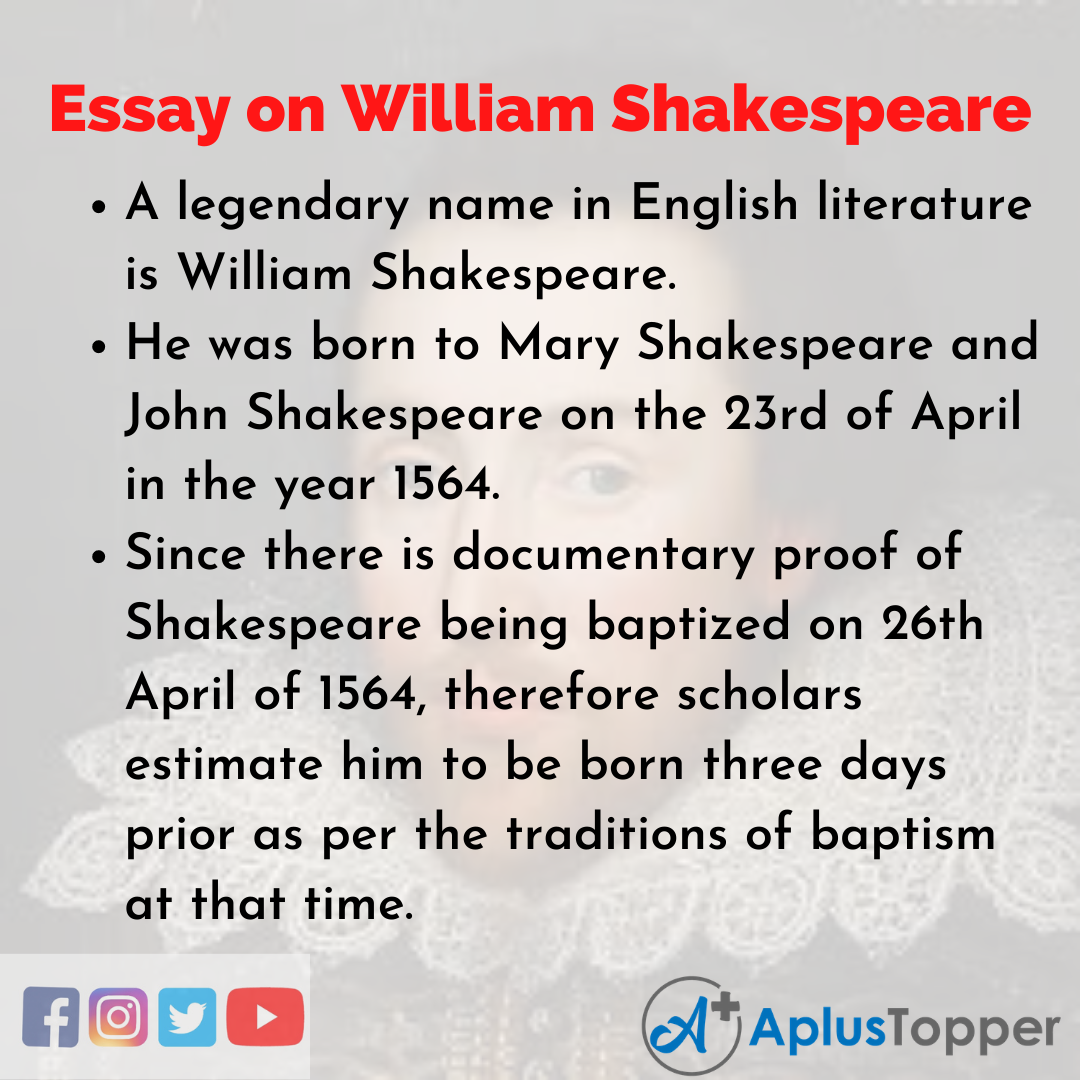 Arguably one of the most famous writers of all time is the English playwright, poet and actor named William Shakespeare. In his lifetime Shakespeare had written about a hundred and fifty-four sonnets, a few verses, two long narrative poems, and thirty-eight plays.

In the last few years of his life, Shakespeare mainly wrote tragicomedies and also collaborated with other English playwrights. Shakespeare’s works of literature have been translated into almost every major languages of the world, his work has also been adapted into movies, and his plays are performed more often than any other playwright’s.

10 Lines on William Shakespeare in English 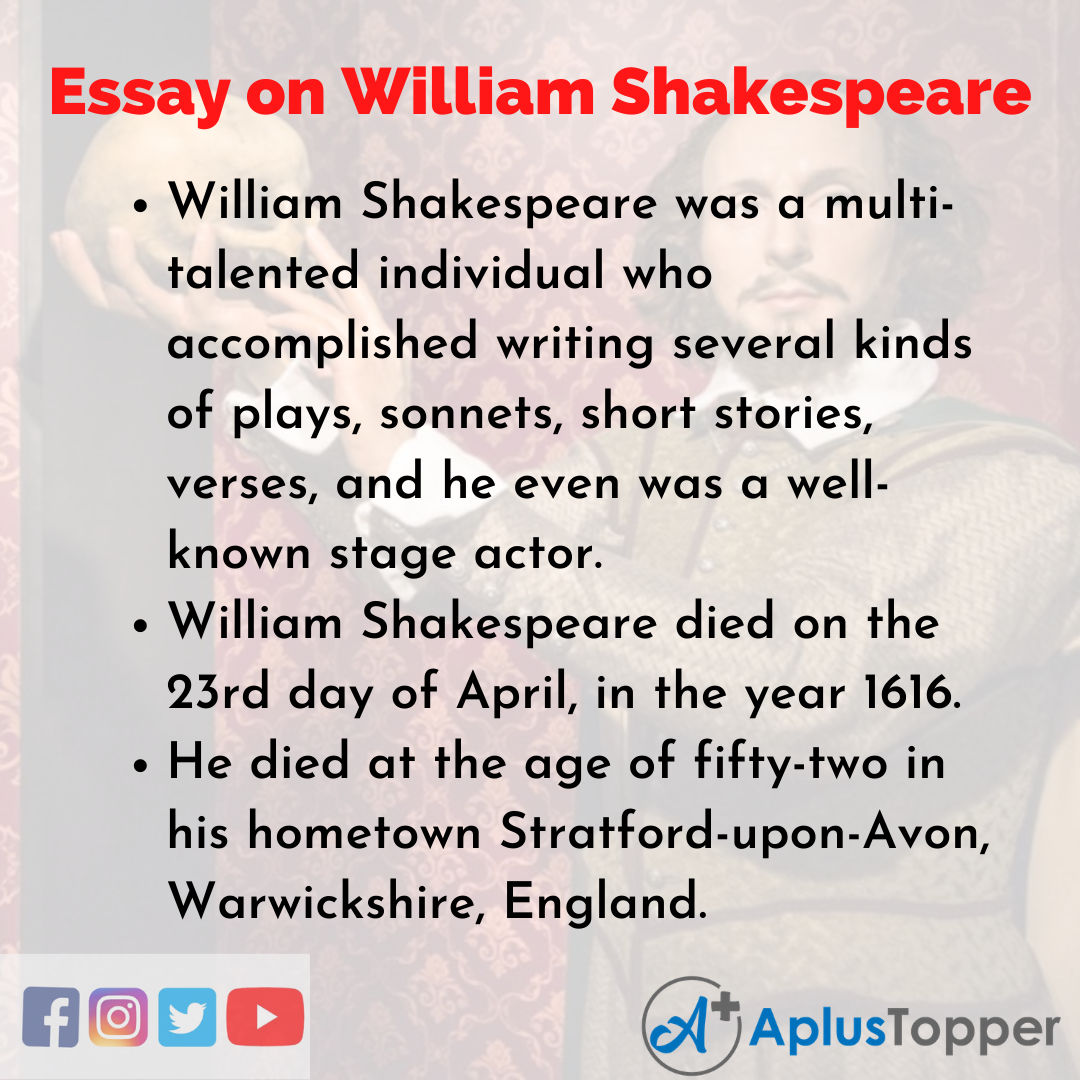 Question 1.
Was Shakespeare born to a poor family?

Answer:
No, on the contrary, he was born in a very well-to-do family.

Question 2.
Which genre of plays did Shakespeare write in his last few years?

Question 3.
Where did William Shakespeare die?