Essay on Vadodara: Vadodara is considered as the third biggest city across the state of Gujarat. In earlier times, this city used to be referred to as Baroda. It is known to be the administrative H.Q. of the district of Vadodara in the state. This city is situated on the Vishwamitri River banks. It is a beautiful city that is widely popular for the Lakshmi Vilas Palace for its incredible architecture.

This city also comprises of several highly recognized universities and colleges including the most famous Maharaja Sayajirao University of Baroda (Vadodara). It is known to be one of the most prominent universities across the state.

We are providing students with essay samples on a long essay of 500 words and a short essay of 150 words on the topic Vadodara for reference.

Formerly called Baroda, this city is located in Gujarat. It is both a cosmopolitan and the largest city of the state. It comprises of a population of around 1.8 million people.

Besides, this place is highly famous for its legendary and beautiful monuments, museums, gardens, and parks. Primarily renowned for the Lakshmi Villas Palace which belongs to the Vadodara state’s Maratha who is originally from a royal background of Gaekwads.

Vadodara is also the home to the most prestigious industries, which is why many students decide to move to this state and pursue their career further. It is a quite famous city that comprises of a large number of universities, industries and so on.

This city back in the 812 A.D had the majority of people belonging to a Hindu background. Hindu rulers ruled over this province till the year of 1297.

The empire that ruled over this city first was known to be the Gupta Empire in the early century. The Chalukya Dynasty then took it over; this period was when the Muslim rulership increased in the entire country. Then, the Delhi Sultans took control of the whole region who ruled the city for several years.

A large number of people in Vadodara speak the language Gujarati, and it is also known to be the city’s official language. Although, many other languages are utilized here includes English, Hindi, Marathi, etc.

Both English and Gujarati are used by the local and state government of Vadodara. At the same time, English and Hindi are mainly used in the offices of the central government. Although the industries and organizations mostly use language English.

In the Maharaja Sayajirao University, English is used as the primary form of communication or instruction. However, the use of languages varies amongst the other schools and colleges, which includes Hindi, Marathi, English, Gujarati, etc.

This city also celebrates many festivals with passion, excitement and joy. During celebrations, the town is usually adorned with sparkling lights.

Vadodara is very famous for its handicrafts, furniture, textiles, and so on. The art and culture of Vadodara are also very vast. This city has many skilled artists and painters that have done an incredible job by creating beautiful and mesmerizing artworks. One can find a variety of paintings all over the city with several different styles.

Besides, it is also considered to be an incredible shopping destination that has several shops that offer good designs and fabrics at a cheaper rate. Vadodara even a great place that has a large number of religious sites that can explore during their trip to this city.

Vadodara is also famously known as a Sanskari Nagar. In other words, it is known as a cultured city. The traditions, history, and the culture of this city. People from different backgrounds live here with love and peace. The culture of this city is represented beautifully during the grand celebration of several festivals like Diwali, Ganesh Chaturthi, Navratri, New Year, Holi, and so on. There also several classical dance and music events that go on in the city. 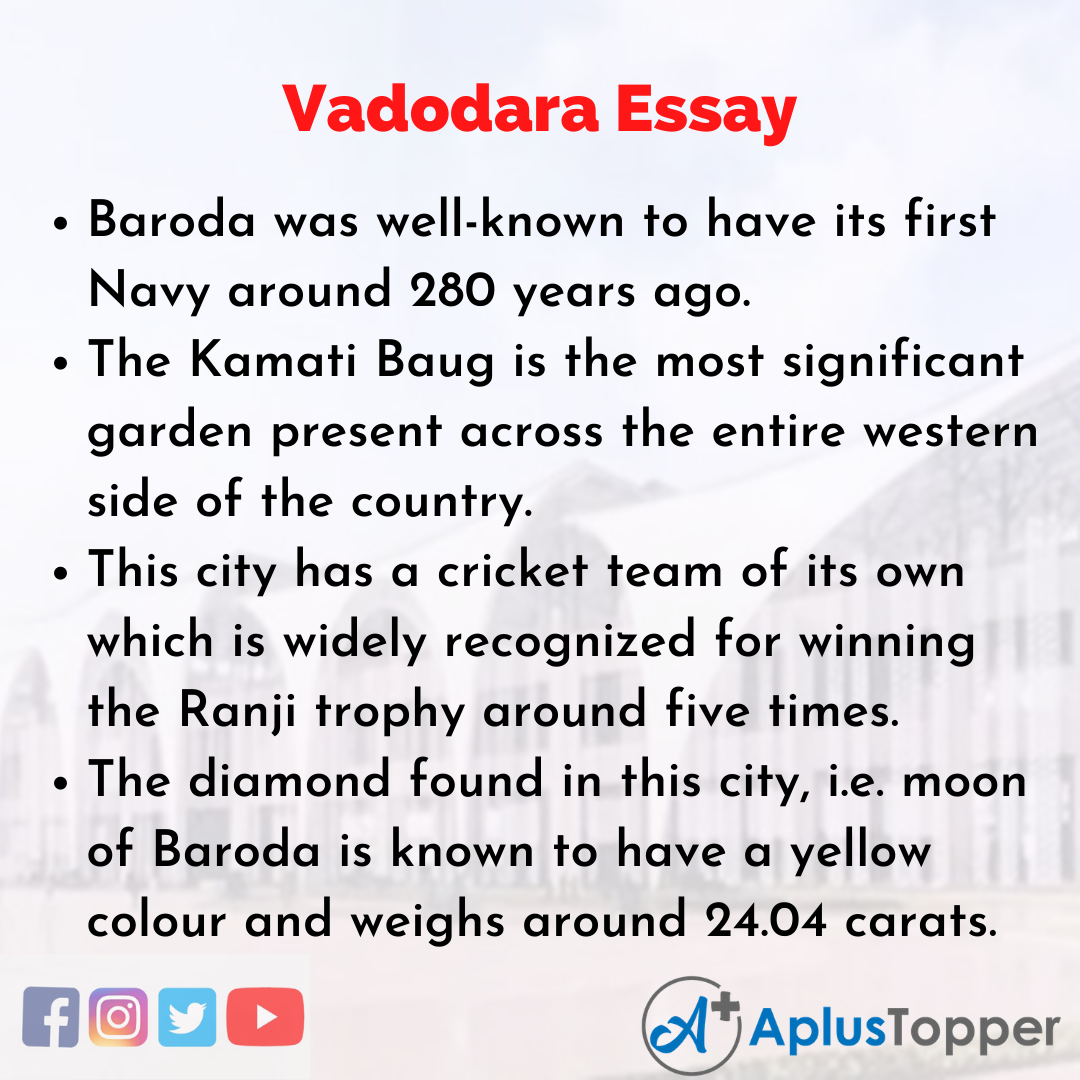 Vadodara is an elegant cosmopolitan city that comes under Gujarat. It homes a few of the most exquisite architectures, including Kirti Mandir, Mandvi Gate, Hazira Maqbara, and so on. This city is also known to be an incredible hub of education, industries, and commerce.

Vadodara is well-known across the globe for the gorgeous places in the country including Lehripura Gate, Statue of Unity along with some other charming monuments. Majority of the people living in this city have a Gujarati background.

This city also celebrates the festival of Navratri with joy and a splendid celebration for nine days. In India, it is considered to be the only place that celebrates Navratri with such enthusiasm and excitement.

This city is also known for containing a large number of beautiful museums, art galleries, and museums. The culture of Gujarat is considered to be vast and rich since it has also successfully maintained the ancient culture of the past rulers and kingdoms.

10 Lines on Vadodara Essay in English

1. Baroda was well-known to have its first Navy around 280 years ago.
2. The Kamati Baug is the most significant garden present across the entire western side of the country.
3. This city has a cricket team of its own which is widely recognized for winning the Ranji trophy around five times.
4. The diamond found in this city, i.e. moon of Baroda is known to have a yellow colour and weighs around 24.04 carats.
5. Trams were present in this city back in the earlier years between 1890 to 1920.
6. The first narrow gauge of the country was the line of railway from Dabhoi to Miyagamback in 1862 in this city.
7. The marathon that is held in Vadodara is considered as one of the biggest in the country.
8. One of the first green airports across this state is in the city of Vadodara.
9. The railway station of Vadodara has over 150 trains going through each day and thus, considered the busiest across Gujarat.
10. This city is also popularly referred to as Cultured City. Question 1.
What are the most well-liked places present in Vadodara?

Question 2.
Which time in a year is considered to be useful to visit Vadodara?

Answer:
The months of October to December and January to March is considered as the perfect time for visits.

Question 3.
What are the dishes that are widely popular in Vadodara?

Question 4.
Why is Vadodara famous across the state?

Answer:
Vadodara is well-known for its rich and vast culture and variety of delicious cuisines.