Essay on Unity: Unity is the mutual feeling of bonding and attachment. It is the belief of oneness and belongingness. Unity inspires patriotic fervor and makes us better human beings. Unity can be seen in almost every aspect of life. Being united makes us stronger and increases our chances of emerging victorious in this struggle of life. The agreement holds us together as one whole nation. In this article, we have provided one long piece on unity and a short piece long with ten lines on the same topic.

Given below is one long Essay on unity composed of about 500 words and one brief Short Essay comprising 100-150 words.

From our very childhood, we are taught that unity makes us stronger and better persons. “United we stand, divided we fall” has been our motto, and we have always tried to follow it. Unity characterizes almost every aspect of teamwork. Starting from the grass root levels, unity is essential for every bit of community service we do. In a school, teachers often divide children into different groups and assign them some work to do. The very purpose of this is to teach children how to perform in a united and organized fashion.

Unity not only makes us more reliable but also increases our resistance by a great deal. In India, we have always tried to achieve economic, political, social, religious, racial, linguistic, and cultural unity. This is because of India’s massive territorial area and diverse nature. Integration in diversity that makes our country unique and different from the others.

To start with, unity does not mean every culture or religion has to be similar. It means, despite the existing differences, everyone will feel that they belong together. Integration is the most significant binding factor of a nation. At this point, we must understand that not every territorial, demarcated area is a Nation. Unity and integrity are the two factors that build a nation.

A nation is characterized by unity and solidarity. Thus, unity can make and break a country. The most courageous display of unity was seen in the struggle for independence of the Indians from the British. Every Indian, be it Hindu, Muslim, Jain, and everyone else, fought to rid India of the hated foreigners.

We have been trying to achieve the same unity and fervor post-independence. However, religious anarchy has become a significant obstruction to unity in India. Hindu and Muslim unity was a signature characteristic of India that began to fade after Partition. Several unforeseen and unfortunate incidents have further separated these two religions. In India, no extra favor is extended to any particular religion, according to the constitution. But, political leaders have always used religious propaganda to feed their interests.

In India, present-day unity is threatened by vote bank politics, which is wholly based on the policy of divide and rule. They provoke one religion against another and cause a breach of peace and unity. But, India has always faced the challenges of unity and has emerged victorious. Unity cannot be enforced on anyone. It is a feeling that comes from the depths of truth-unity fuels solidarity and oneness among individuals. Unity and integrity form the two fundamental pillars of a country and is essential for smooth functioning and administration.

Unity helps us to be more resistant to unknown factors and harmful situations. India, as a whole, is a united nation that can resist foreign attacks and other threats. Unity was the main factor that helped India to gain her independence. Unity is indispensable in every situation, among every person, if they want to achieve success in their lives. 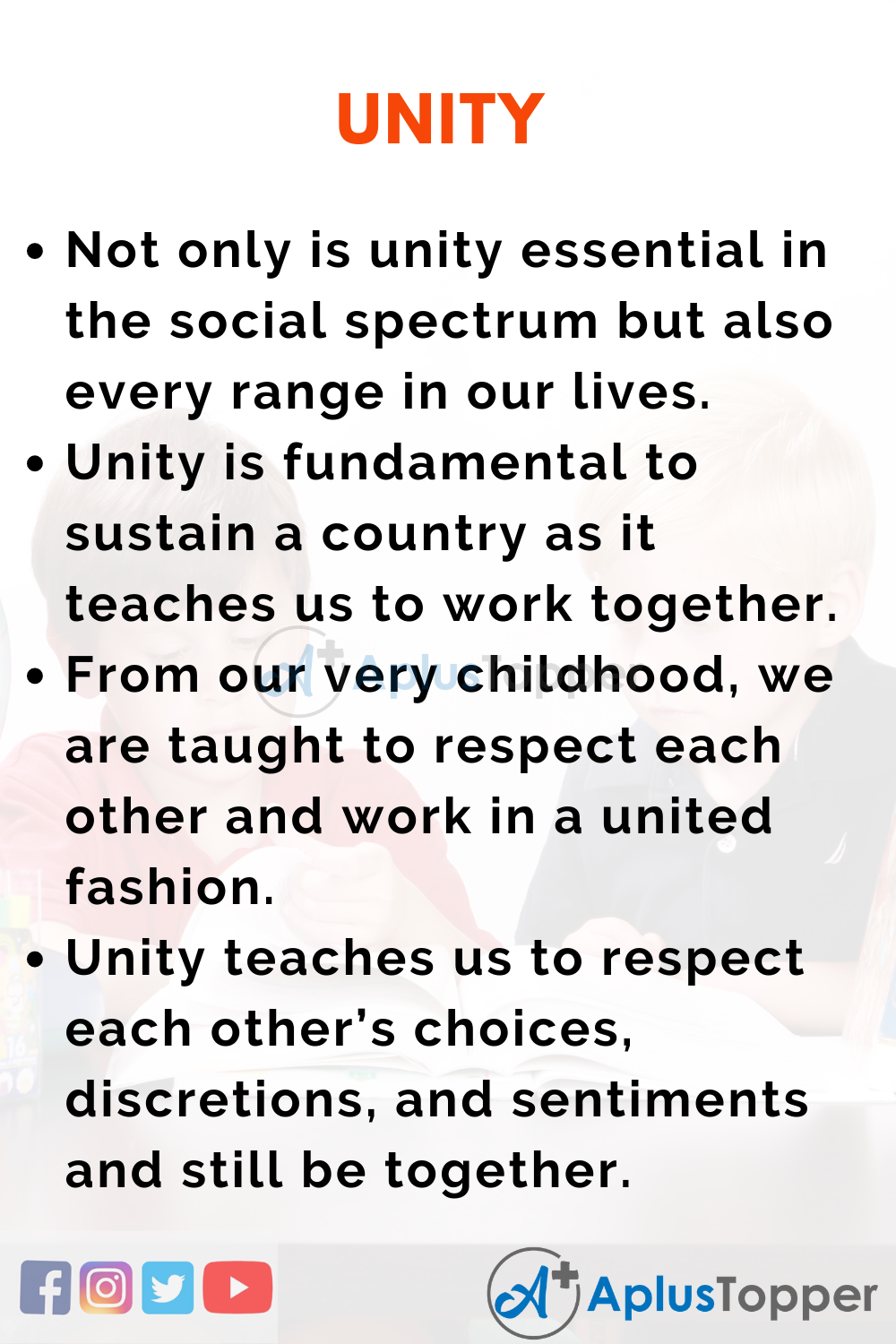 Unity is essential to sustain a nation. A nation is built on the four main pillars of unity, equality, justice, and integrity. Unity is considerably related to balance. If we are not united with each other, we can never believe in the concept of equality.

Unity bases itself on the simple concept that we must respect and treat everyone equally irrespective of our differences. Social integration is crucial to maintain the identity of a society. We must understand how everyone contributes in some way or the other and respects that.
Political discourse and selfish motives have always been a threat to our unity. But, we must remember our historical background and preserve the agreement which is so inherent in us and India.

10 Lines on Unity Essay in English 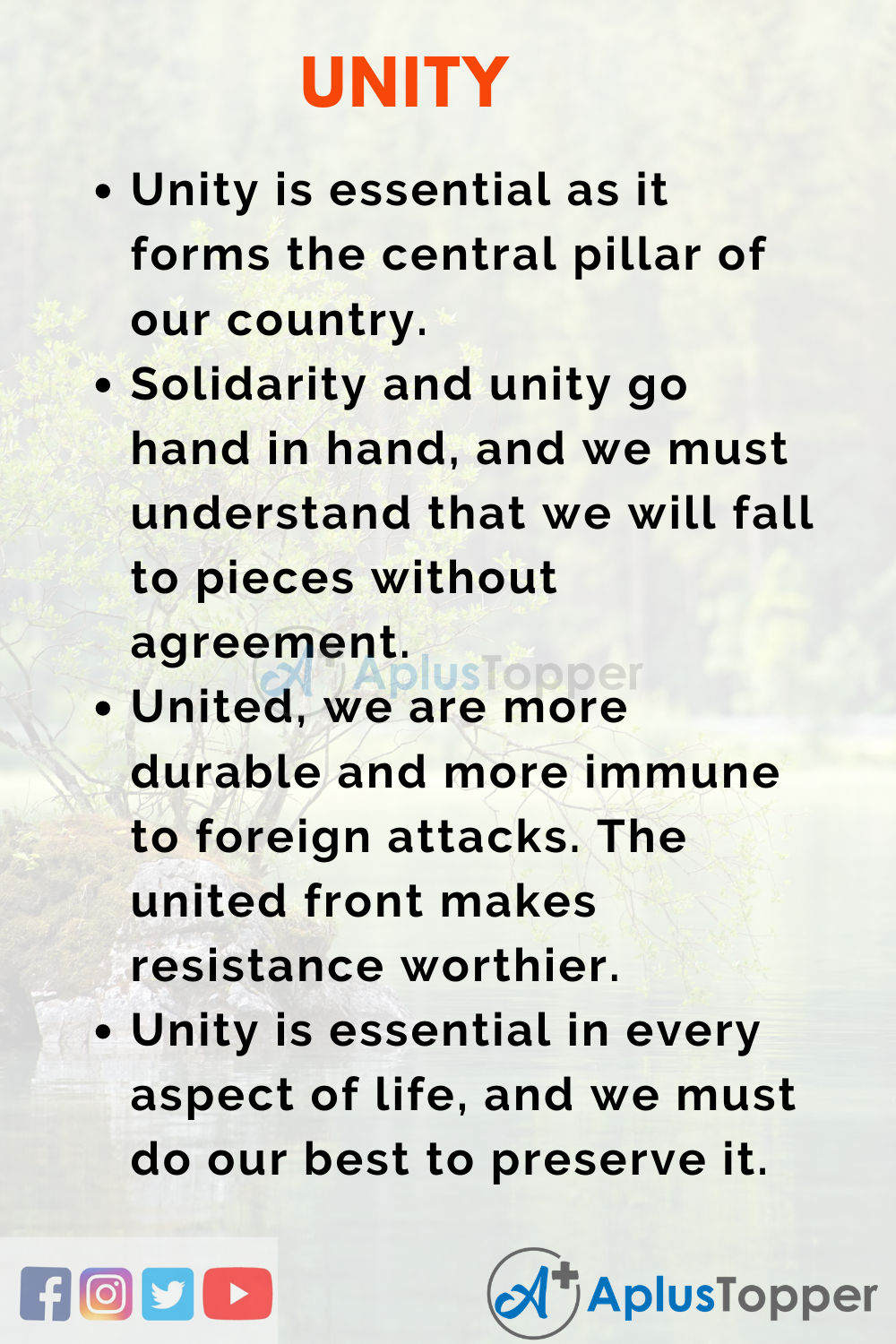 Question 1.
Does India have unity?

Answer:
India’s unity has been under threat for a long time, but we have overcome the challenges and emerged victoriously.

Question 2.
How is unity related to equality?

Answer:
Unity has an intricate relationship with equality. Only when we believe that everyone is equal can we start bonding with them in a united way.

Question 3.
Why is unity essential for a country?

Answer:
Unity is vital to create a strong foundation for a country. Without an agreement, a country will be loose fragments with no feeling of oneness.

Question 4.
What is solidarity?

Answer:
Unity fuels solidarity, a feeling among a group to stay and work together as a team.