Essay On UFO: A United Nations report stated that there have been over million UFO sightings since 1947 all over the world; and over thousands documented landings on the surface of earth. Yet it is considered a make believe story of science fiction.

Below we have given a long essay on UFO of 500 words is helpful for classes 7, 8, 9 and 10 and Competitive Exam Aspirants. This long essay on the topic is suitable for students of class 7 to class 10, and also for competitive exam aspirants.

Unexplained aerial observations have been reported throughout history. Sighting of ‘UFO’ or ‘Unidentified Flying Objects’ of varying sizes, shapes and other characteristics have been recorded all around the world.

Some were undoubtedly astronomical in nature such as comets, bright meteors, one or more of the five planets that can be seen with the naked eyes. But there are others like a flying saucer or a triangular shape flying machine, whose identity and happening is a big mystery. 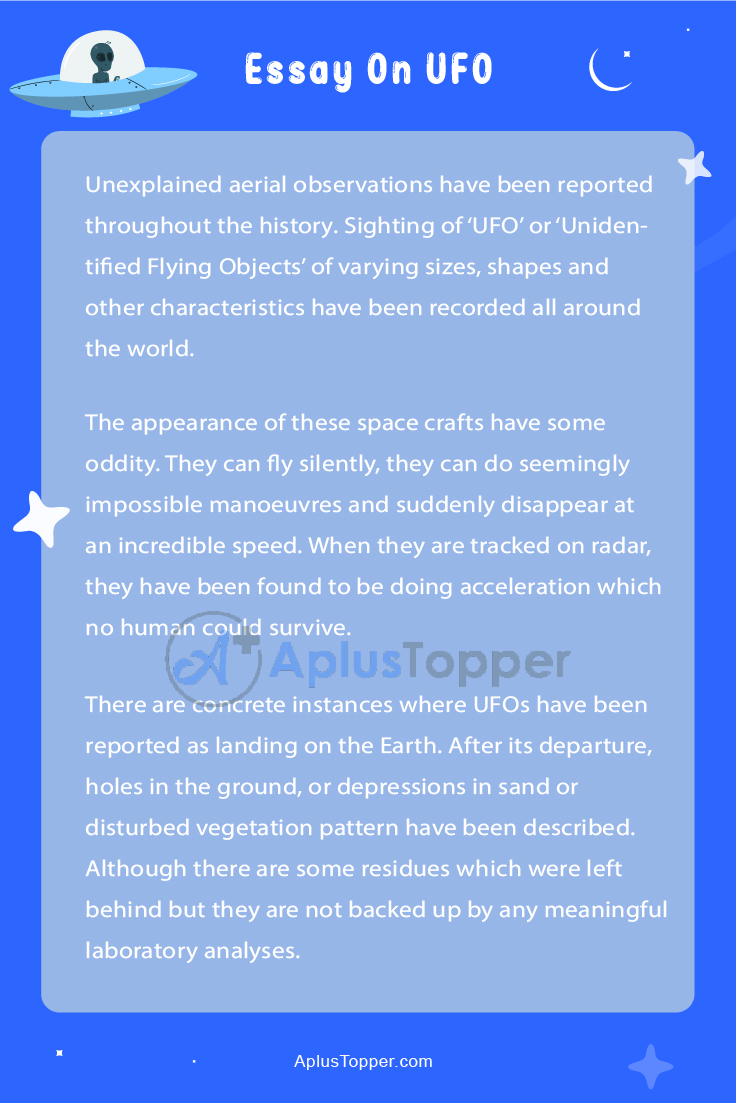 The appearance of these space crafts have some oddity. They can fly silently, they can do seemingly impossible manoeuvres and suddenly disappear at an incredible speed. When they are tracked on radar, they have been found to be doing acceleration which no human could survive.

And that can only be possible if and when they can be tracked as most of the time they cannot be tracked on radar due to their much advance technology. They are presumed to have a stealth type technology which is currently unavailable to human. None of the current publicly known man-made aircrafts are completely invisible.

These UFOs are peculiar in other ways as well, like they usually involve some sort of exceedingly bright lights. Moreover, there are occasions when electrical equipment has ceased to work while the UFO is in the vicinity. And when the UFO disappears, the electrical equipment start working again as if nothing has happened. No explanation has ever been found for this.

Other supporting theories too explains the reasons why these UFOs are from different planets and not from this world. Einstein’s theory of relativity claims that to travel between two stars one needs an aircraft with a speed more than that of light. Light travels at the fastest speed and no such aircraft has been built by the humans that can travel faster than the speed of light. Sp definitely the technology developed by aliens somewhere else is much more advanced and humans are unaware of it. Niel Armstrong has himself stated

“We have no proof, but if we extrapolate, based on the best information we have
available to us, we have to come to the conclusion that other life probably
exists out there and perhaps in many places”.

There have been so many movies in different languages based on the stories of these UFOs and their pilot aliens. These movies show both the aspects of these aliens and UFOs where they prove a blessing as well as disastrous to mankind. A TV serial named Ancient Aliens’, with its expert logical reasoning proves how these aliens have helped the humans on the earth.

They claim that aliens coming through these flying saucers/UFOs have a major role in all the scientific and technological advancements in the past. They even go on to claim that the mythological gods could infact be these aliens in reality who would descend to earth from time to time. According to the experts these aliens possess better technology than any developed country in this world, all throughout the past till now.

Contrary to all this, some have claimed that all these unidentified objects in the sky could infact be experimental or advanced military aircrafts. Many religious extremist also deny their presence or relevance as they believe that any proof of extra-terrestrial life would invalidate their holy books. Yet people from various parts of the world have given descriptions about the appearance of the UFOs. 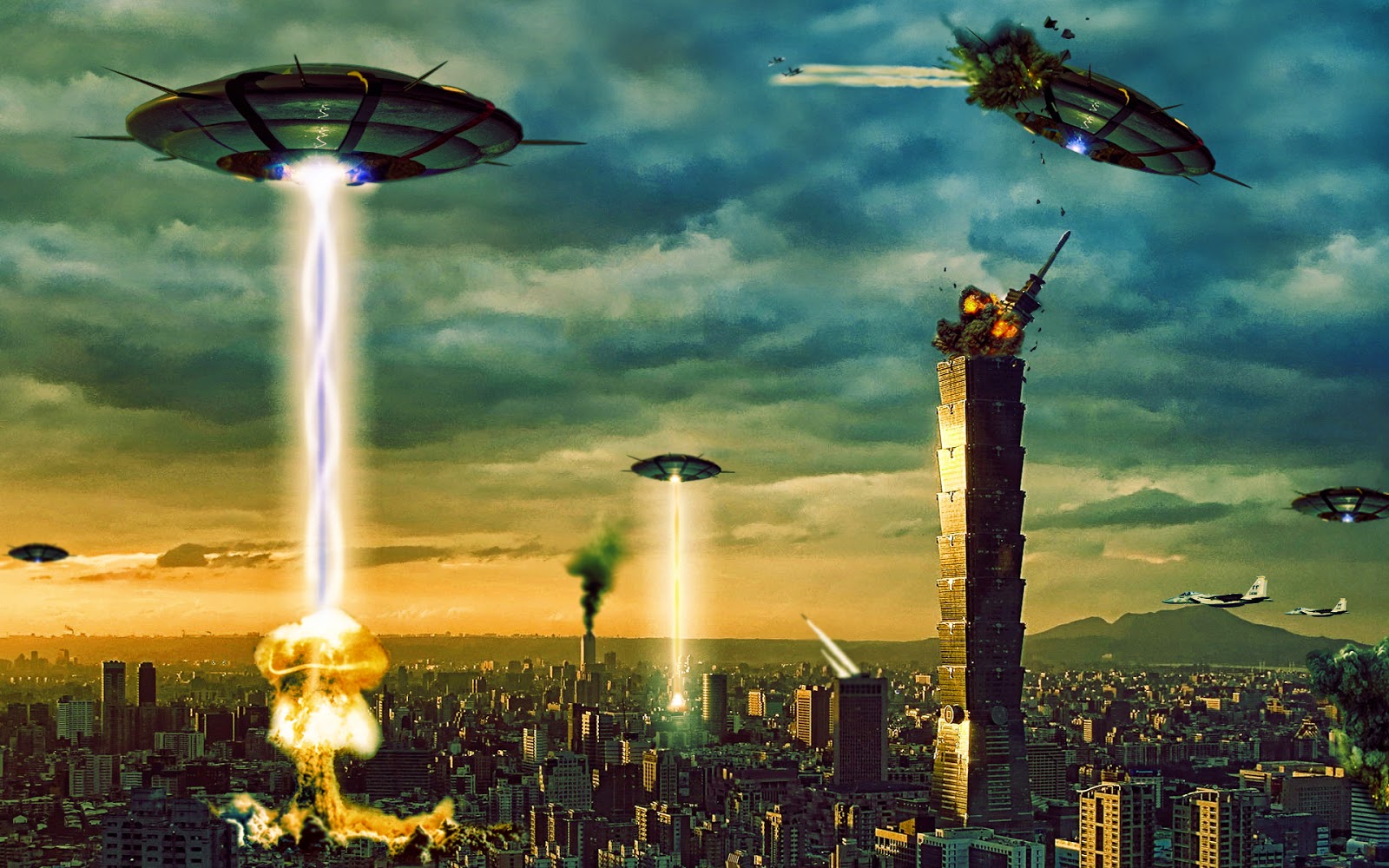 There are concrete instances where UFOs have been reported as landing on the Earth. After its departure, holes in the ground, or depressions in sand or disturbed vegetation pattern have been described. Although there are some residues which were left behind but they are not backed up by any meaningful laboratory analyses.

Professor Stephen Hawking has gone a step further in commenting “Of course it is possible that UFOs really do contain aliens as many people believe and the government is hushing it up”. There is of course the possibility that an advanced alien civilisation has achieved tremendous speed that they are able to travel faster than light and are visiting us?

However, we equally do not know if there are at all any civilisation out there. The question is thus open ended at the moment. We simply do not know whether we are alone or not. Absence of evidence is not evidence of absence. Recent discoveries on potential fossils from Mars and the presence of certain molecules on the moons of Jupiter do however seem to point at the existence of life in the rest of the universe.