Essay on Traffic Rules: India is the second-most populous country in the whole world with a population of more than 135 crore people in the country and that number is increasing by the minute. It is also the country with the most number of two-wheeler owners in the world. With such a huge population and diverse nature of the country, controlling the logistics and transportation is a living nightmare for the authorities.

In this particular essay on traffic rules, we shall be confining our essay to the traffic in the context of the Indian subcontinent. We shall be talking about the challenges and various steps taken to maintain traffic in India.

In metropolitan Indian cities like Mumbai, Bengaluru, Delhi, or Chennai the population density is way too high as compared to that in tier 2, tier 3 and rural districts of the country. And as a direct result of which vehicular traffic density on the streets are also high. Bengaluru, being the IT capital of India, is known for its deadly traffic jams. While lack of good infrastructures like quality pothole-free roads,  bridges and underpasses are some of the reasons for traffic jams and vehicular accidents in the country, disobeying of traffic rules is another reason why the state of affairs associated with the traffic management in India is in a pathetic condition.

There are plenty of traffic rules that one should follow before getting his or her vehicle on the road. And something to be noted here is that traffic rules are not just for the drivers,  it applies to pedestrians and passersby as well.

What are the important traffic rules?

The following are a few important traffic rules which should be followed by every law-abiding citizen for his or her own safety on the road.

Traffic signal: Traffic signal is automated or sometimes manual signal at a junction or crossroad in a high traffic area designed for a smooth flow of traffic without jams. This sounds great in theory, but the only problem here is that even if one person doesn’t follow the rules of a traffic signal, then it can cause traffic jams at such junctions. The three traffic signals are colour coded,  which are red, yellow and green. Traffic signal poles will display these signs in front of the vehicle.

When the signal is red in front of a road,  then the vehicles have to stop behind the zebra crossing. When the signal is yellow, it indicates that the vehicles need to get ready to move. And at the turn of the green signal, traffic can move. This cycle keeps repeating every once or twice in a minute depending on the traffic density. Such signals are present even for pedestrians. To guard and catch hold of traffic violators, the traffic police will be present to manage the situation properly.

Using gestures and vehicular signals: This is the most important discipline to follow to maintain a healthy traffic flow without accidents. Cars and bikes will be given with right and left indicators which a driver should use when he or she wants to take a right or a left turn respectively. Failure to do this will lead to accidents on roads. Other such traffic rules are switching on headlights at night times. Although this rule has become irrelevant now that BS4 engine vehicles have come with headlights where you cannot switch it off.

Many people argue that imposing heavy fines on traffic violators will motivate them to follow traffic rules more stringently. This is not easy to implement in a country like India were the possibility of hit and run cases might increase due to the fear of hefty fines and strict punishments.

Traffic rules are made by traffic and road engineers in consultation with experts and government officials. But at the end of the day, the onus lies on the common man to prevent accidents and jams on the road due to irresponsible driving. We need to remember that the roads we use are also used by ambulance, police vehicle, VIP vehicles and other essential works that are far more important than ours. If we are irresponsible, that might lead to patient’s death because of the delay in the arrival of the ambulance or criminal might be lost by the police personnel due to delay in their arrival. One small step in the right direction while driving can save thousands of lives. 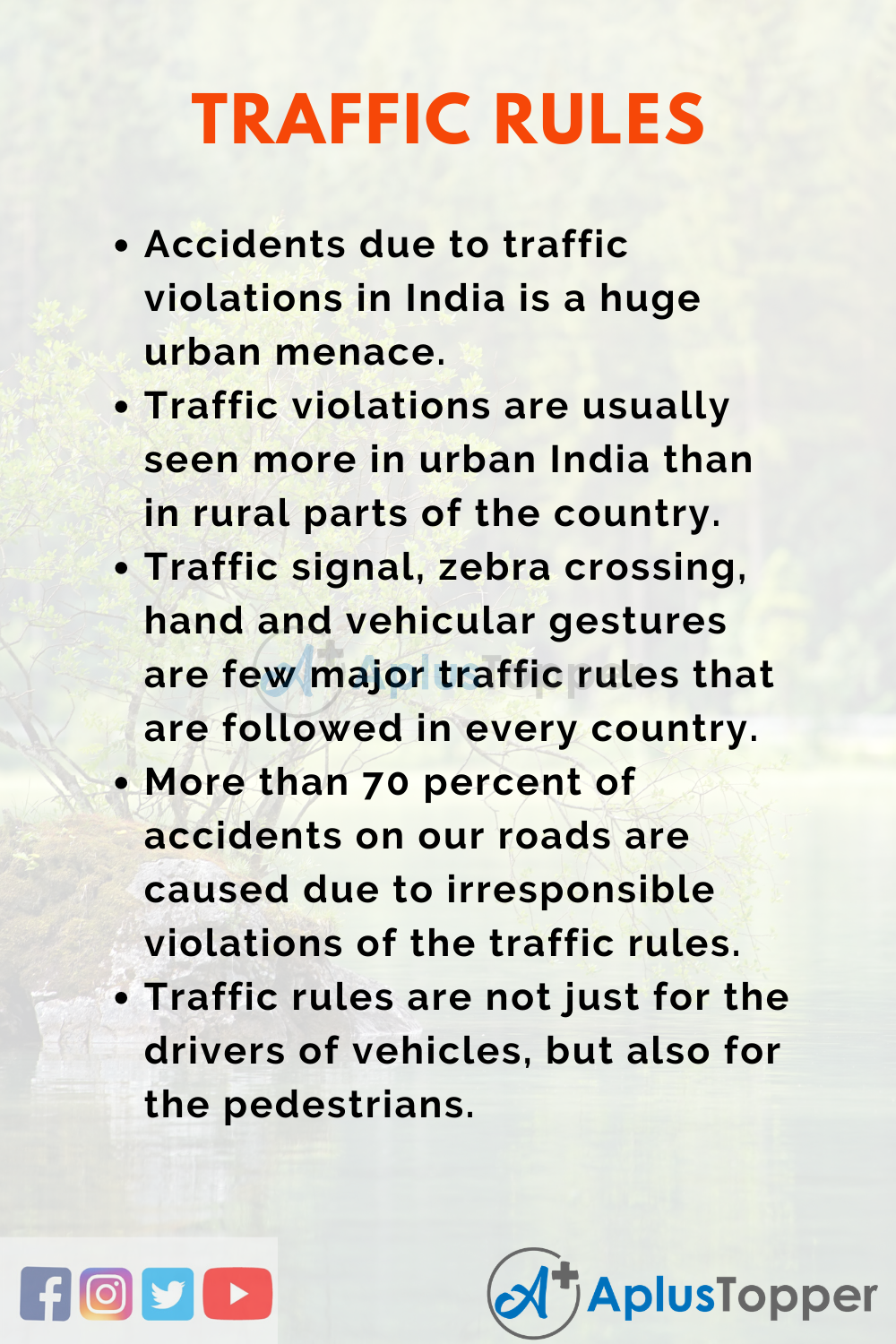 Traffic rules are something that is usually thought to school children but not college students and office goers. By the time these children grow up, they would have either forgotten about the rules or just don’t care enough to follow them. A lesson on traffic rules should be thought more stringently to adults than kids. It’s the adults who are more likely to be irresponsible while driving than a kid.

Violation of traffic rules has become an increasing menace to the society, especially in densely populated vehicular regions in the country such as Mumbai,  Bengaluru or Hyderabad. Hefty fines, strict vigilance from the traffic cops and awareness campaigns on the impact of bad driving are some of the steps that government and civil society activists have taken up to curb the menace. In spite of all these, deaths due to accidents on road because of traffic rules violation is still increasing in India. It is not just the responsibility of the government to implement proper traffic rules. The responsibility equally lies on the shoulders of the citizens as well. As long as we follow the rules and be obedient law-abiding citizens, we can save others lives as well as save our own lives. 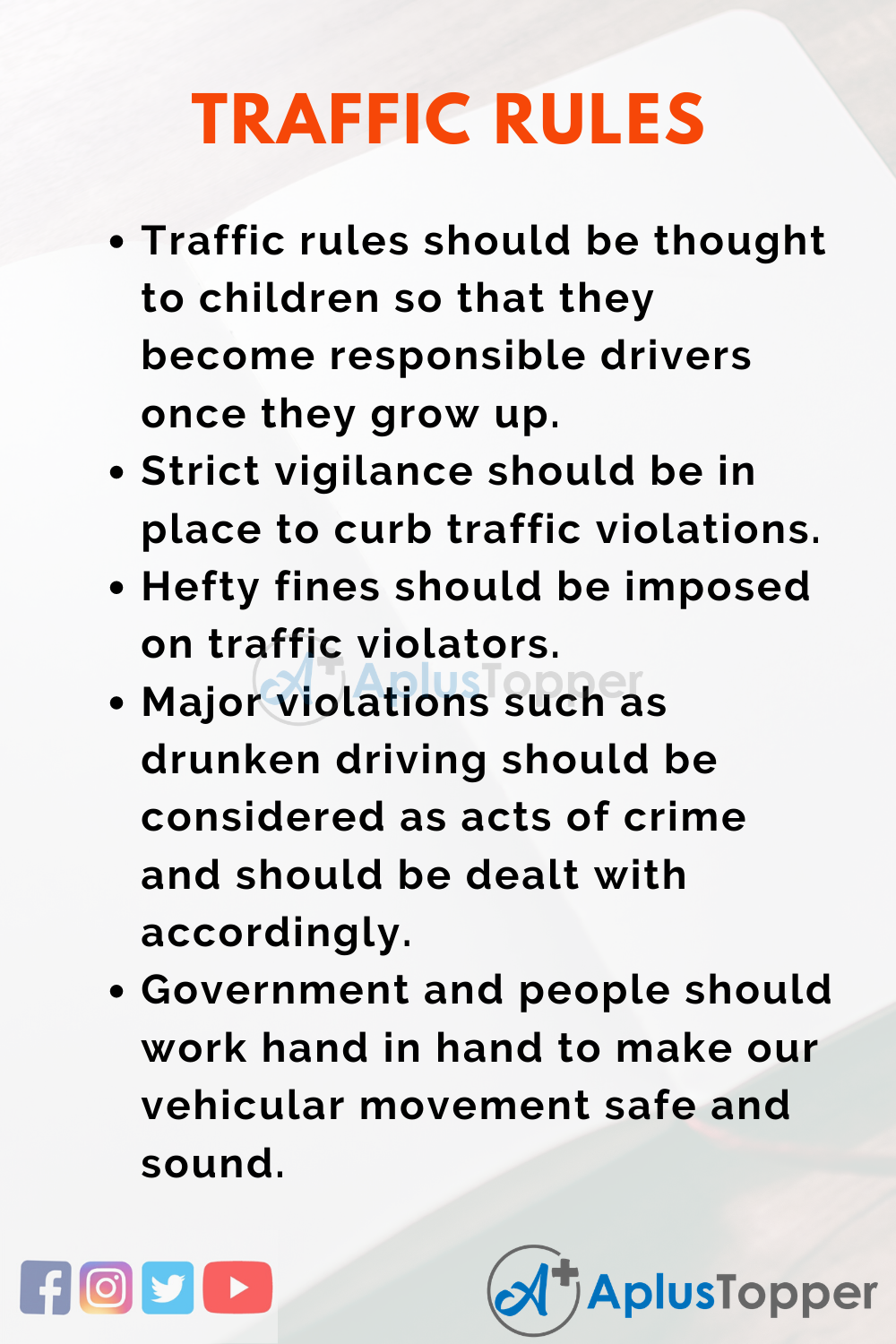 Question 1.
What happens if we don’t follow traffic rules?

Answer:
If we don’t follow traffic rules, we are putting our lives and the life of our loved ones and fellow citizens at risk.

Question 2.
Which is the most dangerous traffic rules violation?

Answer:
Drunken driving is considered to be the most dangerous and fatal traffic rules violation.

Answer:
Heft fines for traffic violators and strict police surveillance on the road are considered to be useful ways to prevent traffic violations.

Question 4.
Which city is known for its rash driving skills?

Answer:
Miami in the USA is known for its rash driving of cars and motorbikes