Essay on Time: Time and tide wait for no man. so I am this. It means that sounds familiar. Time is a valuable thing, and it is best not to take it for granted. The concept of time has fascinated great minds for thousands of centuries. So let us take a moment to get to know the true meaning of time.

We have provided a Essay on Time on the mentioned topic. There is one brief Essay on Time of 500 words; a short essay of 100-150 words; and ten lines on the subject of Time.

Essay on Time are usually helpful for students in classes 7, 8, 9, and 10. They are asked to write these essays for assignments and exams.

Philosophers have been trying to understand the concept of time since the days of Aristotle, and even before. Throughout history, humans have been known to operate within various constructs and versions of time. Unlike all other living species, only humans live in a continuous present, making this one of the defining traits of Human civilization. Therefore, it is not a surprise that through time-immemorial, philosophers, and teachers have tried to find the true meaning of time; Is time real? What is it made of? Is it linear? Does it end? Can it be predicted?

Among philosophers, there is a general agreement that time is continuous. The ancient philosophers of Greece and India were first to address the spheres of reality, which were usually taken for granted, like Matter, Space, Nature, Change, and Time, to name a few. significant points of arguments about the nature of time were whether it was Linear or Cyclic and Infinite of Finite.

Aristotle, who was the first Greek philosopher to support the notion of subjective time, as he suggested that there was no time without a soul. Likewise, for Kant, time, and the thinking that he experienced can not be distinguished, which means that time is mind-dependent and subjective.

Throughout the Enlightenment Period of the 17th and 18th centuries, early modern thought again began to address whether time is actual and absolute or merely an abstract theoretical construct that humans use to sequence and compare things. In the 19th century, philosophers started to challenge whether the present was an instant phenomenon or a period, and conventionalists and phenomenologists both made their contributions to the debate on time.

Throughout Theravada Buddhist philosophy, the belief that time does not exist separately is fundamental. While many Western thinkers (such as Plato, Aristotle, Kant, etc.) were interested in exploring the idea of time, only some of them accept that the nature of time depends on the mind.

Henri Bergson, a renowned French philosopher, is one of the few who advocated the theory that time is mind-dependent when he claimed that real time, which he called duration, exists only in our consciousness. However, Sir Isaac Newton defined time as an independent entity that is actual, not subjective or dependent on others, and therefore mathematically valid and objective.

More recently, modern philosophy has continued to debate whether time is real or unreal. Nevertheless, a whole host of other time-related metaphysical problems have arisen, including whether time is tense or static, whether the present is instantaneous or length, whether past and future exist, how things live over time, etc. Many of the revolutionary theories of modern science have also given rise to new metaphysical perspectives and conclusions about the existence of time.

Since the days of Aristotle, and even before, philosophers have tried to explain the idea of time. Throughout history, humans have been known to work with multiple time structures and variants. Unlike all other living beings, only humans exist in a constant present, making this one of human civilizations distinguishing characteristics.

More recently, modern philosophy has continued to question if time is real or unreal. Moreover, there has also emerged a whole host of other time-related philosophical issues, including whether time is dynamic or static, whether the present is instantaneous or lengthy, whether past and future exist, how things live over time, etc. Many of modern science s groundbreaking ideas have also given rise to new philosophical insights and assumptions on the nature of time.

10 Lines on Essay on Time in English 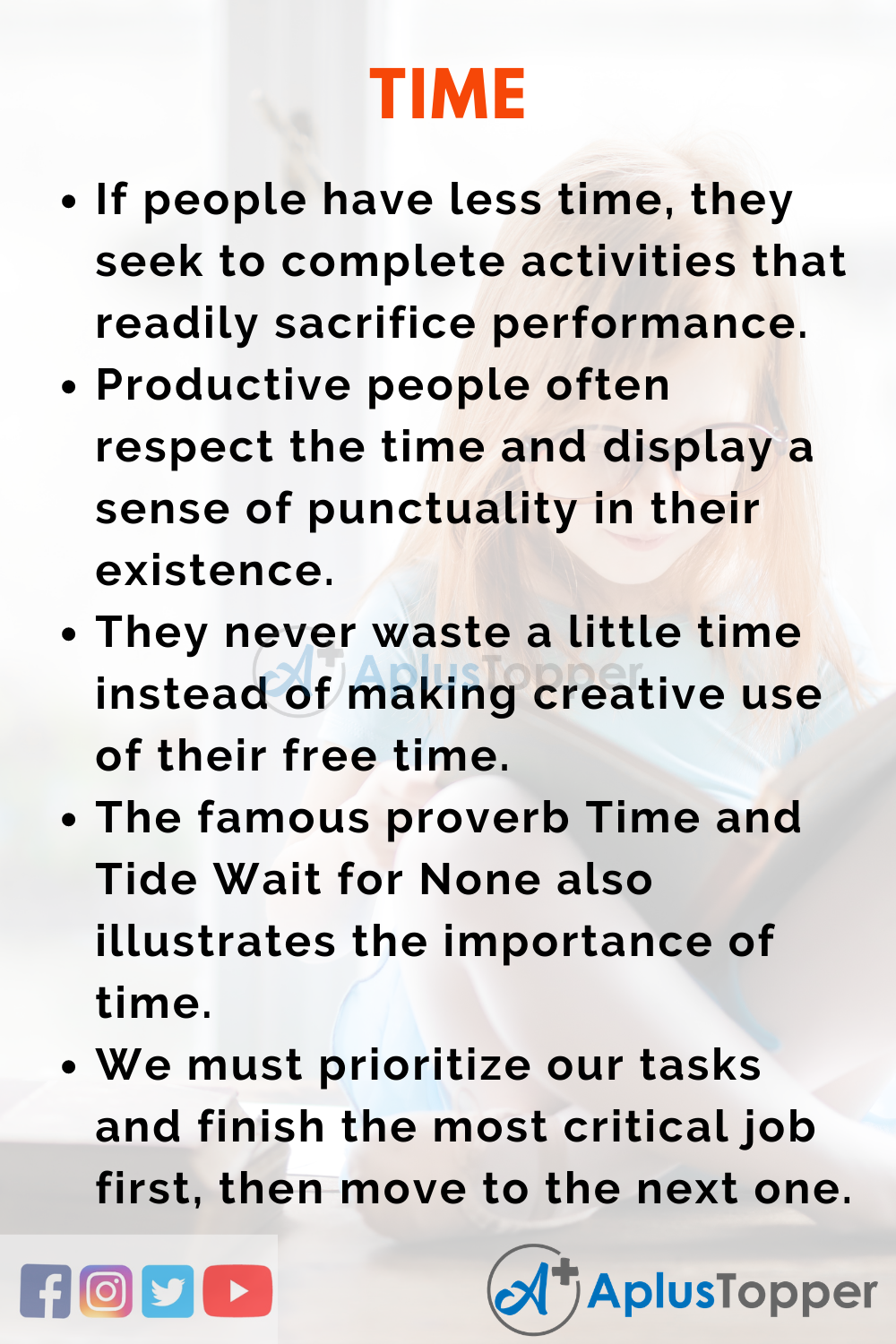 FAQ’s on Essay on Time

Question 1.
What is time?

Answer:
Time is a construct according to which humans manage their daily duties, and record daily phenomena, like the duration of the day, or a month, a year, etc.

Answer:
Among philosophers, there is a general agreement that time is continuous. The ancient philosophers of Greece and India were one of the first to address the spheres of reality, which were usually taken for granted, like Matter, Space, Nature, Change, and also time, to name a few. significant points of arguments about the nature of time were whether it was Linear or Cyclic and Infinite of Finite.

Answer:
Yes, time is necessary because we use time as a measuring rod to manage our day to day activities, and we can also keep track of various phenomena. It is due to the concept of time that the human civilization has flourished.