Essay on Time is Money: Time is a precious aspect of life because if one has the time they can do whatever is possible by them in the due period. Time is money is a famous phrase in English that glorifies the importance of time. There are similar metaphors as ‘time is money’ like ‘time waits for none’ or ‘time and tide wait for none,’ and ‘time is gold,’ etc.

The idea of the metaphor’ time is money’ was present and used among several communities from a very long time before, which indicates that people understood that time should be spent wisely. This notion built among people as they realized that once the time is lost, it cannot be regained. We are providing long and short essay samples on the topic’ Time is Money’ for students, and we are also providing ten points about the concept so that students can refer to them while structuring their essays.

We are providing samples of a long essay of 400-500 words and a short essay of 100-200 words on the topic’ Time is Money’, these essays will be useful for students as a reference while writing their own.

Long Essay on Time is Money 500 Words in English

There is no doubt that time is the only real unit ever to exist. Everyone’s success and failure depend on how they spend their time and those who utilize their time wisely surely attain success. Time is ever dynamic and waits for no one, it runs at its speed, and we are expected to keep up with it.

Money is an economic resource introduced by humans to achieve value for an element that is equal to everyone, irrespective of any other factor. Before the concept of money came into being, people used the barter system to exchange goods. Still, it was a controversial procedure because the value of an element is debatable. Soon after that, minerals or particular resources were used to denote money. After much evolving now, we use coins, cash, and digital money issued by the government.

It was Benjamin Franklin who used the phrase’ time is money’ in his book ‘Advice to a young tradesman,’ which became so popular that there is barely anyone who doesn’t know this phrase. This phrase means that time should be spent wisely so that one can earn money, and if this time is wasted, then all the opportunities to make money are lost.

Today, the world has advanced in many ways, and people have learned to use their time to make a mark for themselves. Evidently, for such reasons, competition has risen among everyone in every field of work. Almost everyone is doing things to serve the purpose of their life. There is a saying that we are living on borrowed time because we are not in control of it, and this life can end at any moment without giving us a chance to bargain.

There are several examples of success and failure stories that will prove the metaphors’ meaning and application, like ‘time is money.’ Still, all those incidents will also make you realize that there is nothing more superior than time. And it is time which can bring you money, but you can never buy lost time with money again; therefore, time is priceless. In the world where everyone is running behind money and success, I think it is better to stop chasing those and run to keep up with time while using it strategically with a near-future goal. 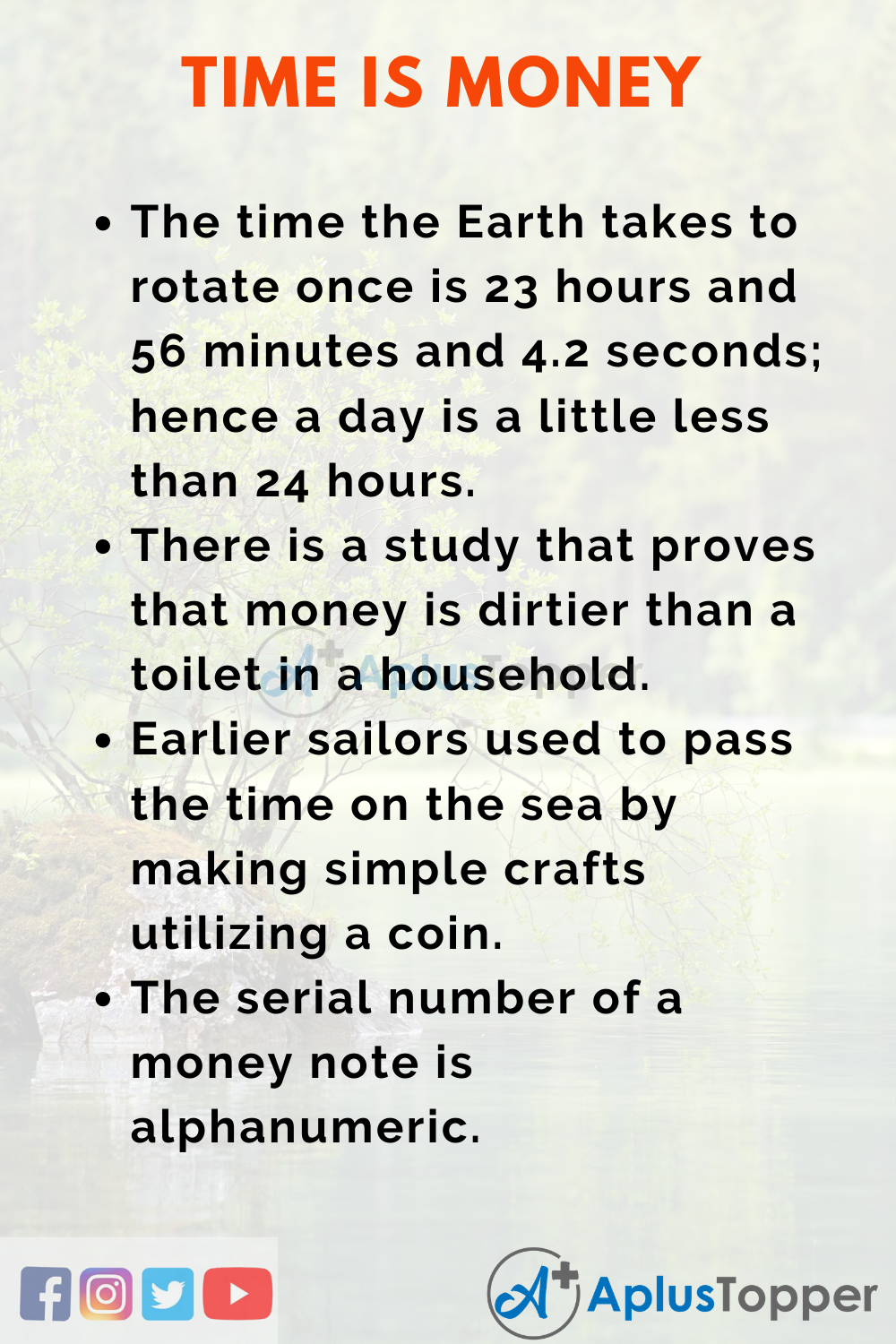 Short Essay on Time is Money 150 Words in English

Time is something that runs on its fixed pace and indeed waits for no one. ‘Time is money’ is a phrase that portrays the relationship between time and money: that for making money, one has to use their time in the right way. This phrase applies to every one of us.
The person who does understand the meaning and importance of the phrase’ time is money’ surely can prosper in life and gain a stable financial condition. Those who spend their lives in ignorance and do not actively spend their time often become examples of failure.
One must always remember that lost money can be regained if one uses their remaining time wisely, but lost time can never be repurchased using money.

10 Lines on Time is Money Essay in English

FAQ’s on Time is Money Essay

Question 1.
Who invented the phrase ‘time is money’?

Answer:
Benjamin Franklin wrote the phrase ‘Remember that time is money’ in a book 1748.

Question 2.
Between time and money, which is more valuable?

Answer:
In my and most people’s opinions, that time is more valuable than money, because with time in hand one can obtain money, but with cash, you cannot buy time.

Question 3.
Is the phrase ‘time is money’ a proverb or an idiom?

Answer:
The expression’ time is money’ is a proverb.

Question 4.
From when are we using money?

Answer:
The act of using other substances that signifies the value of money was there since 500 BC. But paper money was invented in China and used in the Tang Dynasty sometime between 618 AD and 907 AD.